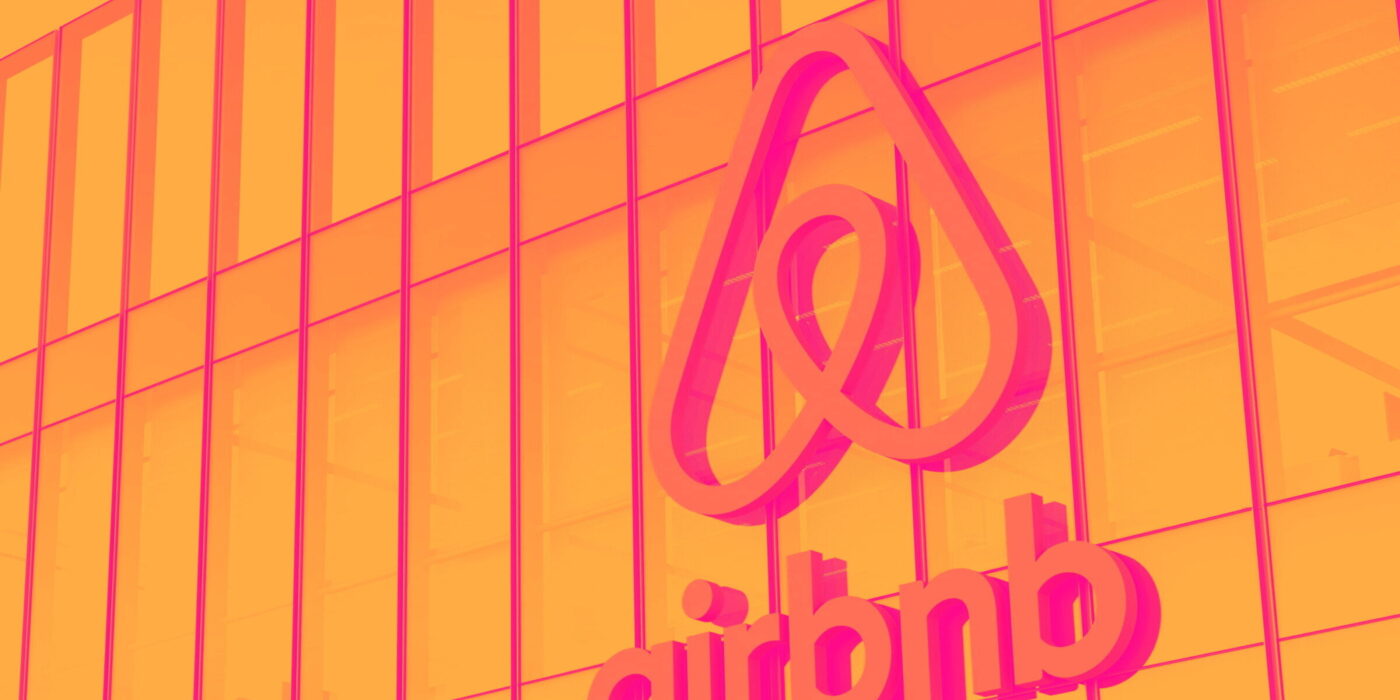 Online accommodations platform Airbnb (NASDAQ: ABNB) reported Q1 FY2022 results beating Wall St's expectations, with revenue up 70.1% year on year to $1.5 billion. On top of that, guidance for next quarter's revenue was surprisingly good, being $2.08 billion at the midpoint, 5.94% above what analysts were expecting. Airbnb made a GAAP loss of $18.7 million, improving on its loss of $1.17 billion, in the same quarter last year.

Airbnb was founded on the premise that the travel industry had become commoditized into offering standardized accommodations in crowded hotel districts around landmarks and attractions. Their view was that a one-size-fits-all approach limited how much of the world a person could access, leaving guests feeling like outsiders in the places they visit. Airbnb enabled home sharing at a global scale and created a new category of travel.

Their innovation was instead of traveling like tourists and feeling like outsiders, guests on Airbnb can stay in neighborhoods where people live, have authentic experiences and live like locals in over 100,000 cities around the world. Airbnb’s platform also opened up a whole new revenue stream to thousands of people around the world; earning money on spare rooms. For hosts, Airbnb provided them an aggregation platform that brought global demand to individual’s doorsteps, while providing for pricing, scheduling, liability protection, and merchandising functionality to remove the friction from bringing their inventory online.

Airbnb's revenue growth over the last three years has been incredible, averaging 68.3% annually. 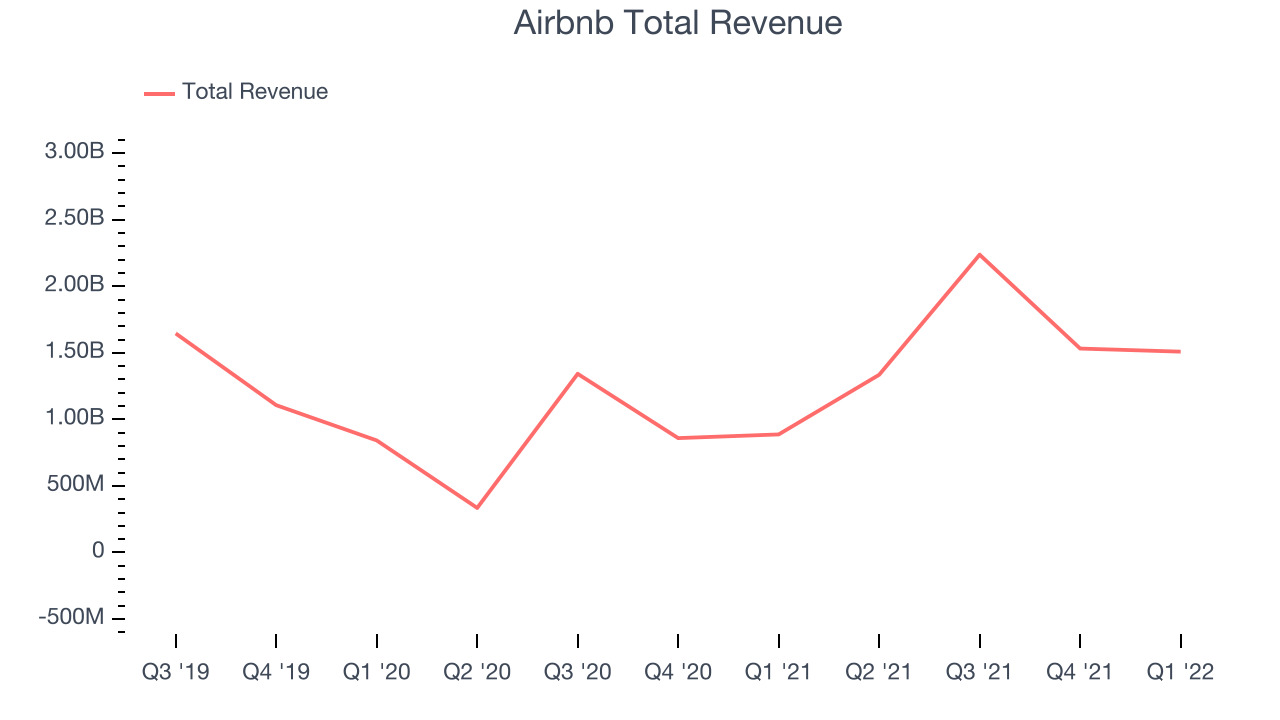 Guidance for the next quarter indicates Airbnb is expecting revenue to grow 55.7% year on year to $2.08 billion, slowing down from the 298% year-over-year increase in revenue the company had recorded in the same quarter last year. Ahead of the earnings results the analysts covering the company were estimating sales to grow 25% over the next twelve months.

Over the last two years the number of Airbnb's nights booked, a key usage metric for the company, grew 48.6% annually to 102.1 million users. This is among the fastest growth of any consumer internet company, indicating that users are excited about the offering.

In Q1 the company added 37.7 million nights booked, translating to a 58.5% growth year on year.

Average revenue per user (ARPU) is a critical metric to track for every consumer internet product and for Airbnb it a function of how much its users spend on the platform and what is Airbnb's take rate (cut) from each transaction. 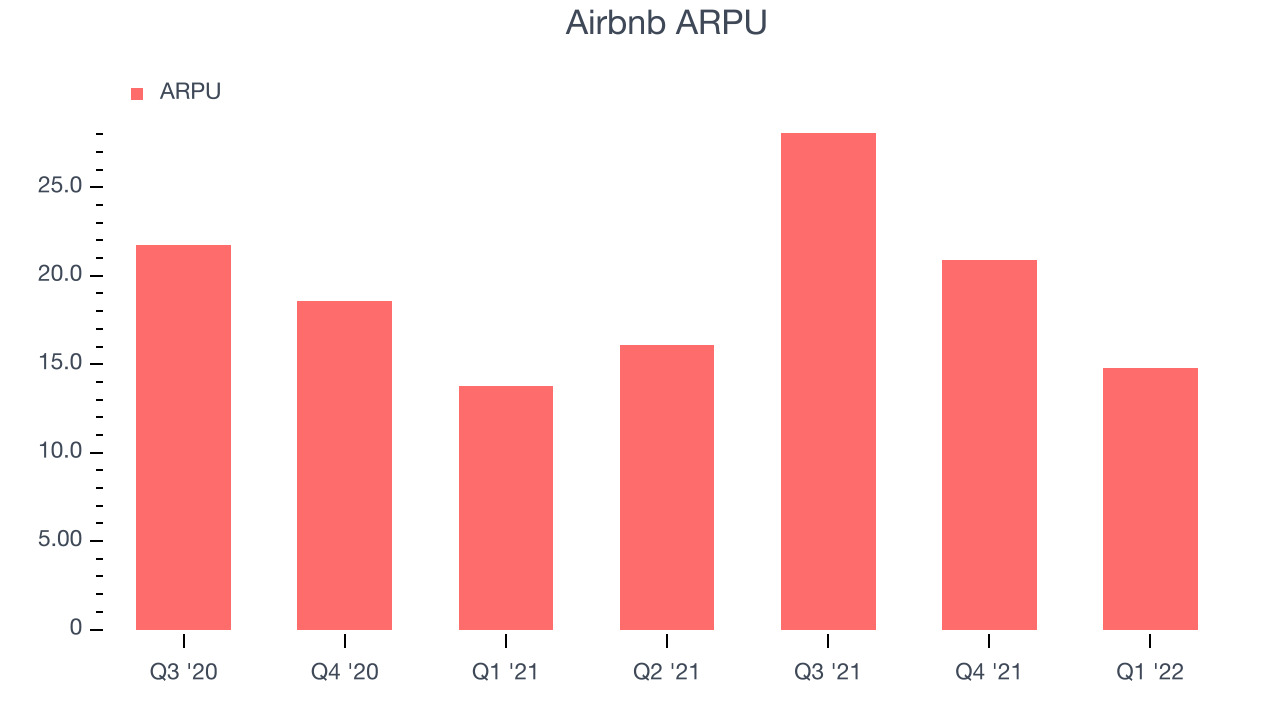 Airbnb’s ARPU growth has been decent over the last two years, averaging 16.3%. The ability to increase price while still growing its user base shows the value of Airbnb’s platform. This quarter, ARPU grew 7.3% year on year, reaching $14.77 for each of the nights booked.

Unlike enterprise software that is typically sold by sales teams, consumer internet businesses like Airbnb grow by a combination of product virality, paid advertisement or incentives.

Airbnb is quite efficient at acquiring new users, spending only 25.9% of its gross profit on marketing over the last year. This level of sales and marketing spend efficiency is indicative of a highly differentiated product offering, which gives Airbnb the freedom to invest its resources into new growth initiatives.

Airbnb reported EBITDA of $229.1 million this quarter, which was a 15.1% margin. Over the last four quarters Airbnb has demonstrated a very strong profitability with average EBITDA margins of 25.6%. 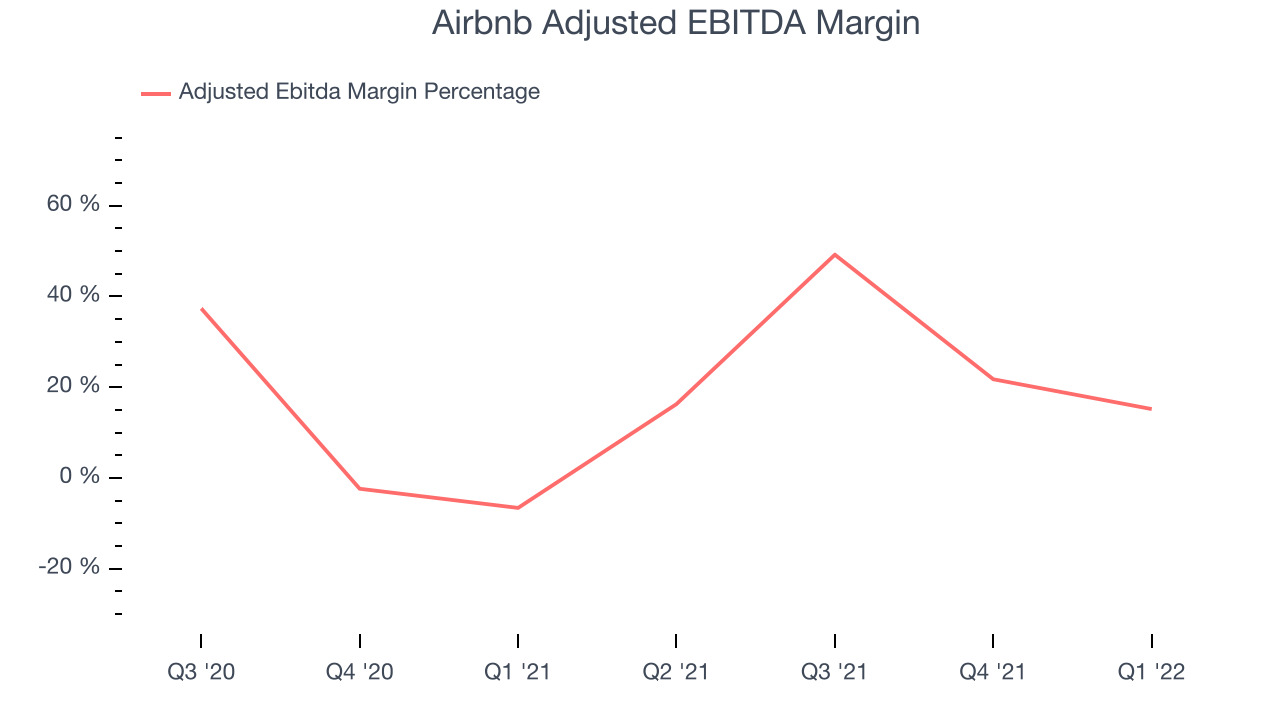 If you follow StockStory for a while, you know that we put an emphasis on cash flow. Why, you ask? We believe that in the end cash is king, as you can't use accounting profits to pay the bills. Airbnb's free cash flow came in at $1.19 billion in Q1, up 145% year on year. 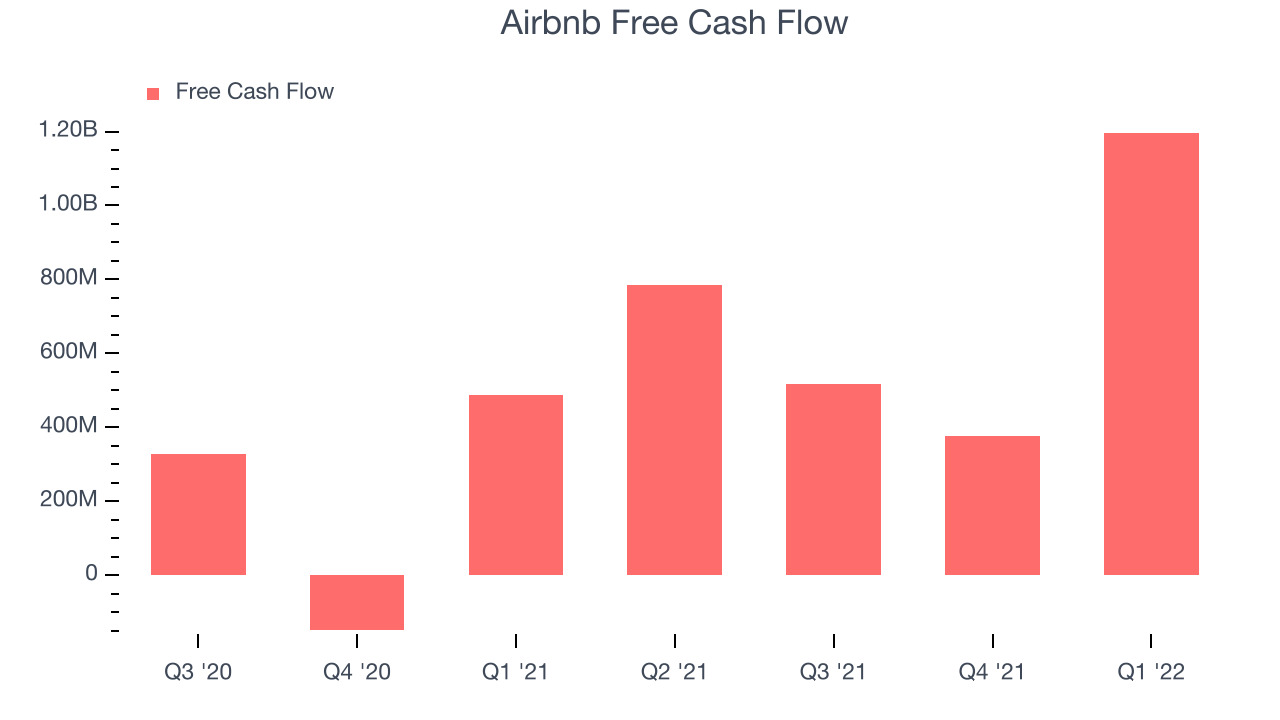 Airbnb has generated $2.87 billion in free cash flow over the last twelve months, an impressive 43.4% of revenues. This robust FCF margin is a result of Airbnb asset lite business model, scale advantages, and strong competitive positioning, and provides it the option to return capital to shareholders while still having plenty of cash to invest in the business.

With a market capitalization of $97.2 billion, more than $9.32 billion in cash and with free cash flow over the last twelve months being positive, the company is in a very strong position to invest in growth.

We were impressed by the exceptional revenue growth Airbnb delivered this quarter. And we were also glad to see the user growth. Zooming out, we think this impressive quarter should have shareholders feeling very positive. The company currently trades at $102 per share.

When considering Airbnb, investors should take into account its valuation and business qualities, as well as what happened in the latest quarter. There are numerous reasons why we think Airbnb is one of the best consumer internet companies out there. While we would expect growth rates to moderate from here, its revenue growth has been exceptional, over the last three years. On top of that, its powerful free cash generation enables it to sustainably invest in growth initiatives while maintaining an ample cash cushion, and its user growth has been strong.

At the moment Airbnb trades at next twelve months EV/EBITDA 42.0x. Looking at the consumer internet landscape today, Airbnb's qualities really stand out, and we really like it at this price.

The Wall St analysts covering the company had a one year price target of $196.4 per share right before these results, implying that they saw upside in buying Airbnb even in the short term.