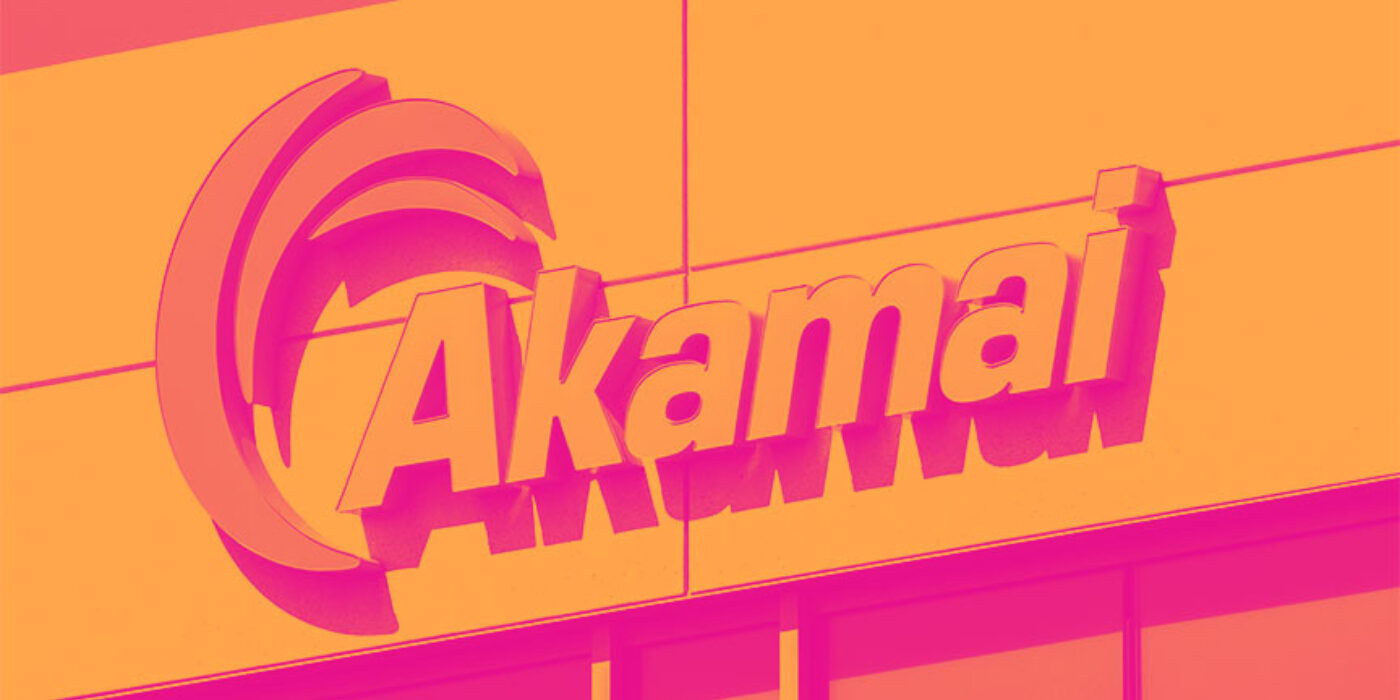 Web content delivery and security company Akamai (NASDAQ:AKAM) reported results in line with analyst expectations in Q3 FY2022 quarter, with revenue up 2.5% year on year to $881.8 million. Akamai made a GAAP profit of $108.1 million, down on its profit of $178.9 million, in the same quarter last year.

When streaming videos to a large number of viewers, operating a high traffic ecommerce site or a gaming portal, the server providing the content can get overwhelmed by the number of requests, resulting in a slow response time, dropped connections and frustrated customers. Using Akamai’s Content Delivery Network, organizations can provide quality and uninterrupted access to websites or applications to their customers, even at a really large scale.

Akamai operates a network of servers around the world and uses them to store copies of web content owned by its customers on servers closest to the user, to improve download speed. By moving web content closer to users, Akamai also helps to prevent cybercriminals from hijacking internet traffic, which is more vulnerable when transmitted over long distances.

For example, many customers visit online shopping sites during the holiday season to access exclusive offers on days like Black Friday. To cope with the enormous volume of traffic experienced during this period, Akamai works in the background to automatically check the location of every user accessing the shopping site and serves them the website from the Akamai server geographically closest to them, without the user noticing anything. This means users in the UK can enjoy the same web experience as users in the US when accessing a website located in the US.

Akamai competes with content delivery network providers such as Cloudflare (NYSE:NET), Google (NASDAQ:GOOG) (NASDAQ:GOOGL), Amazon (NASDAQ:AMZN), and Microsoft (NASDAQ:MSFT) as well as innovators in edge computing such as Fastly (NYSE:FSLY).

As you can see below, Akamai's revenue growth has been unimpressive over the last two years, growing from quarterly revenue of $792.8 million in Q3 FY2020, to $881.8 million. 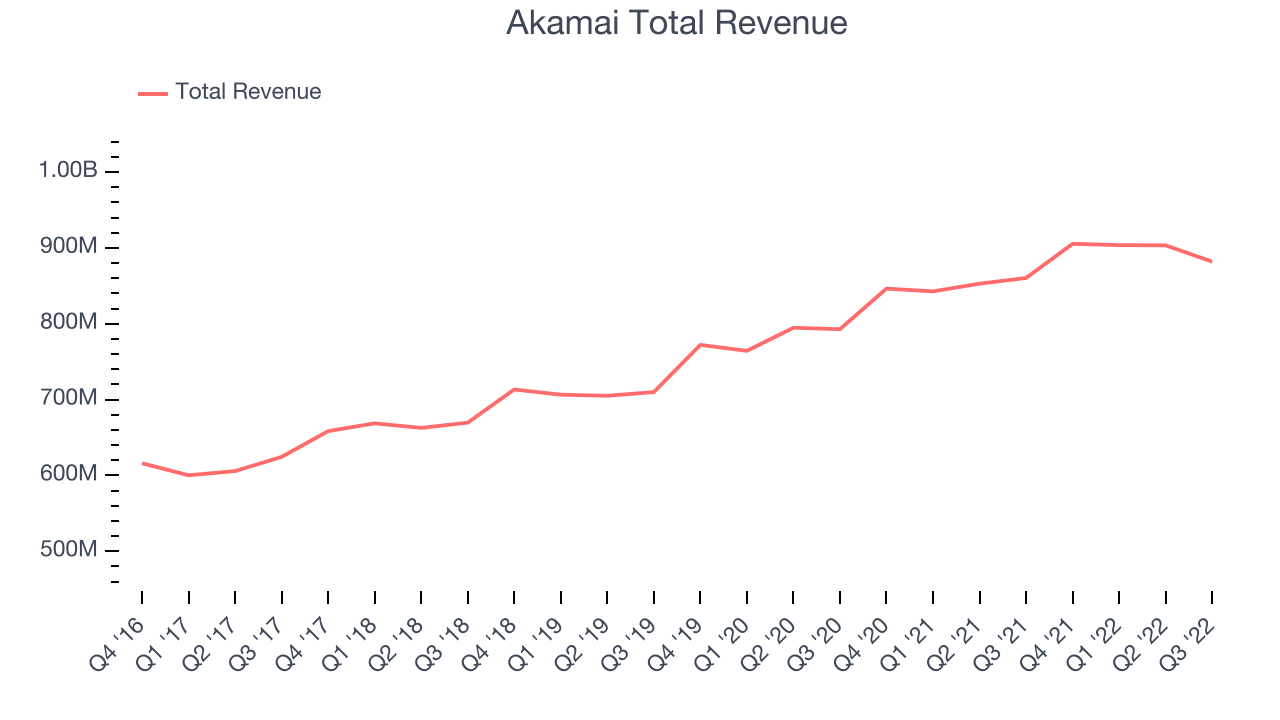 Akamai's quarterly revenue was only up 2.5% year on year, which might disappoint some shareholders. But the revenue actually decreased again in Q3 by $21.4 million, compared to $315 thousand decrease in Q2 2022. While one-off fluctuations don't always have to be concerning, we have no doubt that shareholders would like to see the revenue rebound soon.

Ahead of the earnings results the analysts covering the company were estimating sales to grow 3.74% over the next twelve months.

What makes the software as a service business so attractive is that once the software is developed, it typically shouldn't cost much to provide it as an ongoing service to customers. Akamai's gross profit margin, an important metric measuring how much money there is left after paying for servers, licenses, technical support and other necessary running expenses was at 60.7% in Q3.

That means that for every $1 in revenue the company had $0.60 left to spend on developing new products, marketing & sales and the general administrative overhead. This would be considered a low gross margin for a SaaS company and it has dropped significantly from the previous quarter, which is probably the opposite of what shareholders would like it to do.

If you follow StockStory for a while, you know that we put an emphasis on cash flow. Why, you ask? We believe that in the end cash is king, as you can't use accounting profits to pay the bills. Akamai's free cash flow came in at $312.9 million in Q3, roughly the same as last year.

Akamai has generated $1.11 billion in free cash flow over the last twelve months, an impressive 31% of revenues. This robust FCF margin is a result of Akamai asset lite business model, scale advantages, and strong competitive positioning, and provides it the option to return capital to shareholders while still having plenty of cash to invest in the business.

Sporting a market capitalization of $13.3 billion, more than $864.1 million in cash and with positive free cash flow over the last twelve months, we're confident that Akamai has the resources it needs to pursue a high growth business strategy.

It was good to see Akamai product strong free cash flow, on the other hand, revenue has declined again. Overall, it seems to us that this was a complicated quarter for Akamai. The company is flat on the results and currently trades at $84.03 per share.

When considering Akamai, investors should take into account its valuation and business qualities, as well as what happened in the latest quarter. We cheer for everyone who is making the lives of others easier through technology, but in case of Akamai we will be cheering from the sidelines. Its revenue growth has been very weak, and analysts expect growth rates to deteriorate from there. And while its very efficient customer acquisition hints at the potential for strong profitability, unfortunately gross margins show its business model is much less lucrative than the best software businesses.

Akamai's price to sales ratio based on the next twelve months is 3.6x, suggesting that the market does have lower expectations of the business, relative to the high growth tech stocks. While we have no doubt one can find things to like about the company, and the price is not completely unreasonable, we think that at the moment there might be better opportunities in the market.