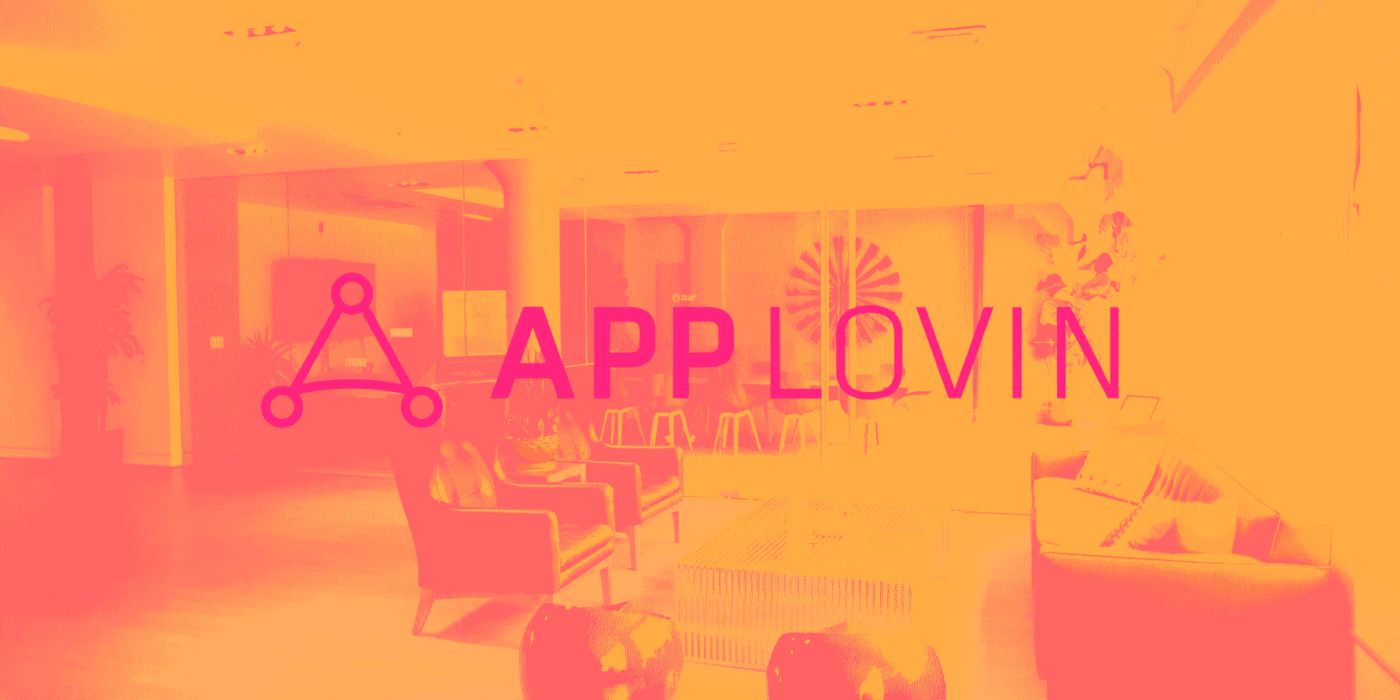 Mobile app advertising platform AppLovin (NASDAQ: APP) missed analyst expectations in Q3 FY2022 quarter, with revenue down 1.9% year on year to $713 million. Guidance for the next quarter also missed analyst expectations with revenues guided to $692.5 million at the midpoint, or 12.5% below analyst estimates. AppLovin made a GAAP profit of $23.6 million, improving on its profit of $142 thousand, in the same quarter last year.

Co-founded by Adam Foroughi who was frustrated with not being able to find a good solution to market his own dating app, AppLovin (NASDAQ:APP) is a provider of marketing and monetization tools for mobile app developers and also operates a portfolio of mobile games.

AppLovin combines a mobile ad network, developer tools, and a portfolio of hundreds of free to play mobile games it has assembled through acquisitions and partnerships with game studios.

Today’s app developer journey has three key steps – make, market, and monetize. The ‘make’ step has never been easier, but developers still face key challenges in marketing and monetizing their apps. Because of the ease of creation, there are millions of apps on Apple and Google’s appstores, which creates discovery and marketing challenge for mobile app developers. A further issue is even after a user downloads an app, developers must compete for user engagement and screen time. Most mobile games rely on in-app purchases (IAPs) and in-game advertising for monetization, which present hurdles on how to price IAPs appropriately while navigating the mobile ad ecosystem is difficult for individual developers.

AppLovin solves for these issues through its unique business model. Originally a provider of marketing tools for mobile game developers, AppLovin altered its strategy in 2018 and began acquiring and partnering with game studios to launch its own mobile gaming apps. The data and insights generated from the hundreds of in-house mobile gaming apps generated a virtuous cycle which improved its marketing software’s pricing and advertising recommendations for its customers, enabling developers to improve their discovery, monetization, and engagement.

AppLovin’s competitors can be broken into two groups: mobile game developers and mobile ad networks. On the gaming side, rivals include Zynga (NASDAQ:ZNGA), Playtika (NASDAQ: PLTK), and Roblox (NYSE: RBLX). Competitors in its ad network business are The Trade Desk (NASDAQ: TTD) and Unity Software (NYSE:U).

As you can see below, AppLovin's revenue growth has been exceptional over the last two years, growing from quarterly revenue of $381.7 million in Q3 FY2020, to $713 million. 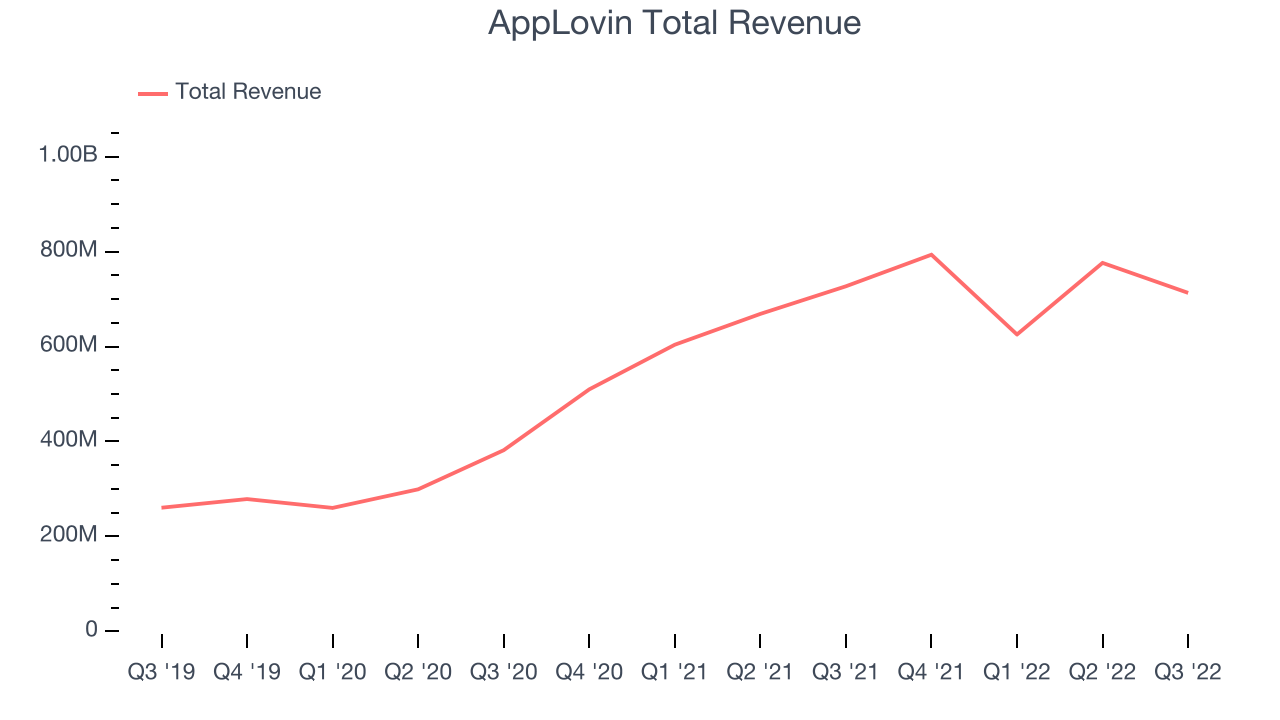 But this quarter AppLovin's revenue was down 1.9% year on year, which might be a disappointment to some shareholders.

AppLovin is guiding for revenue to decline next quarter 12.7% year on year to $692.5 million, a further deceleration on the 55.6% year-over-year decrease in revenue the company had recorded in the same quarter last year. Ahead of the earnings results the analysts covering the company were estimating sales to grow 14.7% over the next twelve months.

What makes the software as a service business so attractive is that once the software is developed, it typically shouldn't cost much to provide it as an ongoing service to customers. AppLovin's gross profit margin, an important metric measuring how much money there is left after paying for servers, licenses, technical support and other necessary running expenses was at 57.7% in Q3. 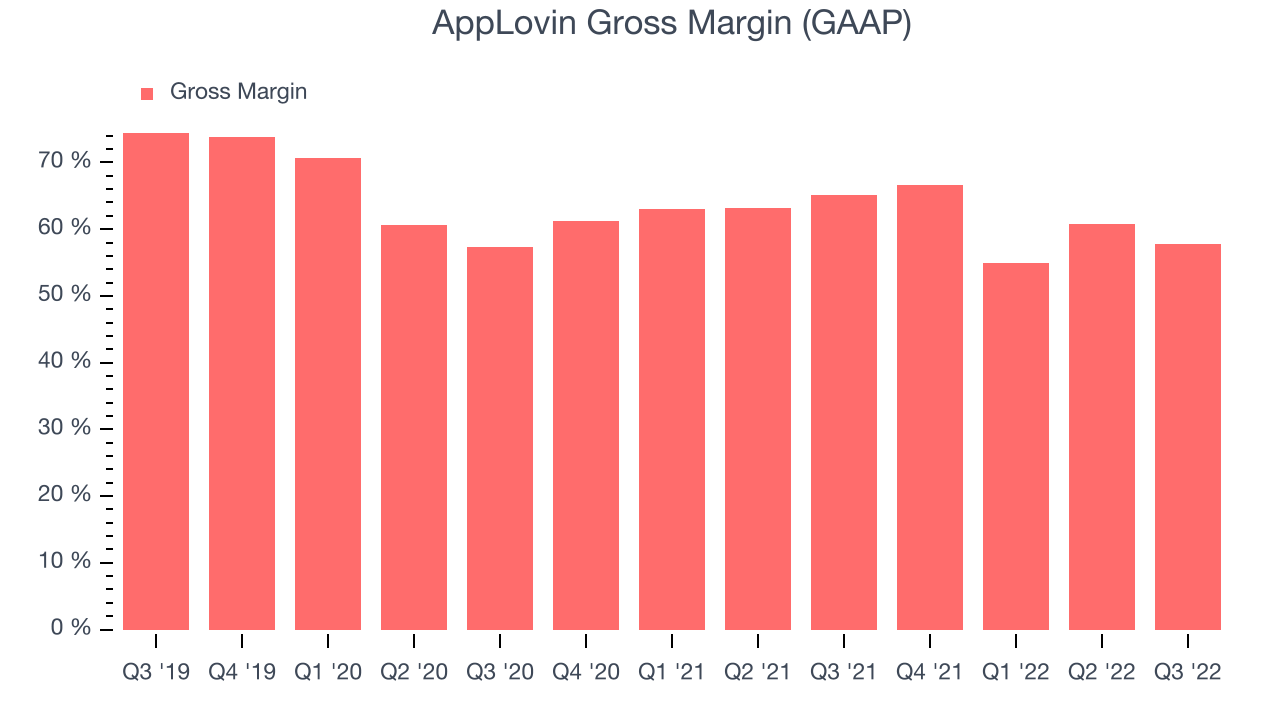 That means that for every $1 in revenue the company had $0.57 left to spend on developing new products, marketing & sales and the general administrative overhead. This would be considered a low gross margin for a SaaS company and it has been going down over the last year, which is probably the opposite direction shareholders would like to see it go.

If you have followed StockStory for a while, you know that we put an emphasis on cash flow. Why, you ask? We believe that in the end cash is king, as you can't use accounting profits to pay the bills. AppLovin's free cash flow came in at $172.3 million in Q3, up 38.6% year on year. 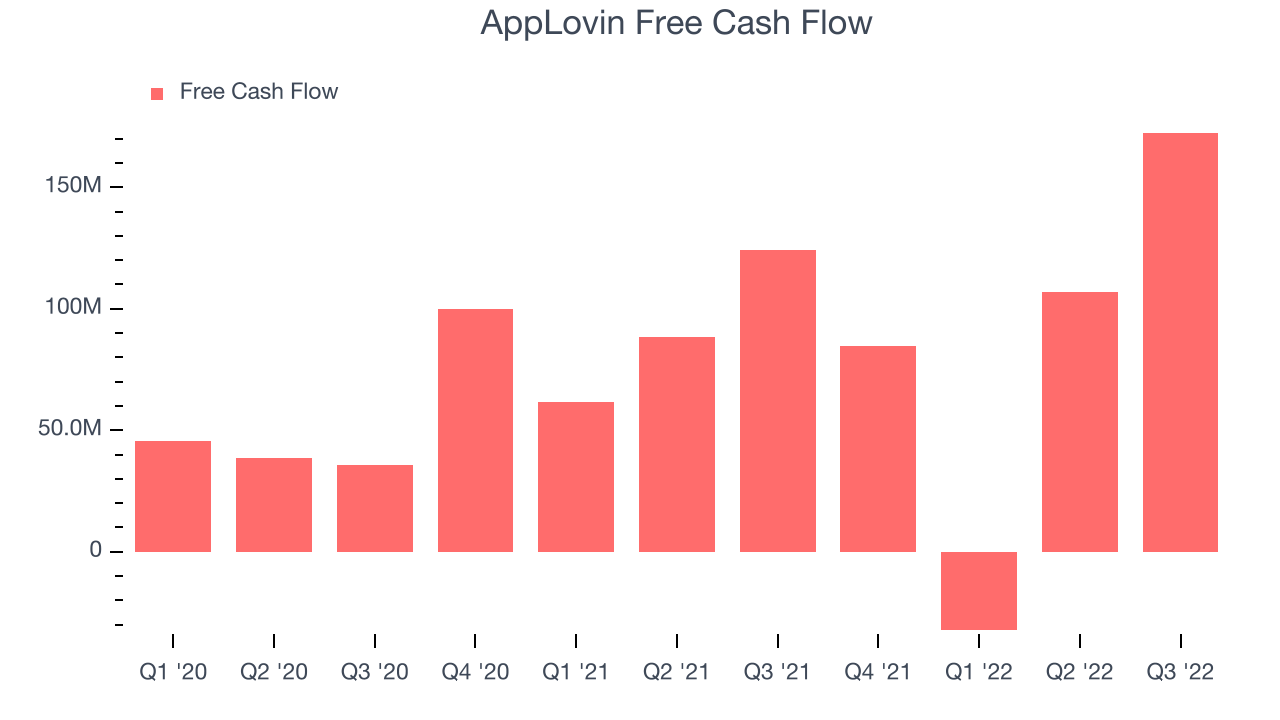 AppLovin has generated $331.6 million in free cash flow over the last twelve months, a solid 11.4% of revenues. This strong FCF margin is a result of AppLovin asset lite business model and provides it plenty of cash to invest in the business.

With a market capitalization of $5.62 billion AppLovin is among smaller companies, but its more than $943.5 million in cash and positive free cash flow over the last twelve months give us confidence that AppLovin has the resources it needs to pursue a high growth business strategy.

We struggled to find many strong positives in these results. On the other hand, it was unfortunate to see that AppLovin's revenue guidance for the full year missed analysts' expectations and revenue growth was quite weak. Overall, it seems to us that this was a complicated quarter for AppLovin. The company currently trades at $10.88 per share.

AppLovin may have had a bad quarter, but investors should also consider its valuation and business qualities, when assessing the investment opportunity. We think AppLovin is a solid business. We would expect growth rates to moderate from here, but its revenue growth has been exceptional, over the last two years. And while its gross margins show its business model is much less lucrative than the best software businesses, the good news is its very efficient customer acquisition hints at the potential for strong profitability, and its strong free cash flow generation gives it re-investment options.

AppLovin's price to sales ratio based on the next twelve months is 1.6x, suggesting that the market is expecting more steady growth, relative to the hottest tech stocks. There are definitely things to like about AppLovin and looking at the tech landscape right now, it seems that the company trades at a pretty interesting price point.

The Wall St analysts covering the company had a one year price target of $44 per share right before these results, implying that they saw upside in buying AppLovin even in the short term.