Communications platform as a service company Bandwidth (NASDAQ: BAND) reported results ahead of analyst expectations in the Q3 FY2022 quarter, with revenue up 13.5% year on year to $148.3 million. Guidance for next quarter's revenue was $147 million at the midpoint, which is 1.35% above the analyst consensus. Bandwidth made a GAAP loss of $802 thousand, improving on its loss of $6.94 million, in the same quarter last year.

Bandwidth might not be well known with consumers, but most of us would have used their services unknowingly either using online conferencing software, or contacting customer service representatives through a company’s website. Bandwidth’s core advantage is that it provides a software platform over its own telecommunications network, and is therefore able to better control the quality of the connection, all while providing cheaper prices than a legacy voice connection.

Founder David Morken started Bandwidth while on 90 days of paid leave from the Marine Corps. He moved into his parents’ house with his three children and wife in order to bootstrap the company.

Even though Bandwidth competes with other well known CPaaS companies like Twilio (NYSE:TWLO), it mostly competes with legacy telecommunications companies such as Verizon (NYSE:VZ) and AT&T (NYSE:T), which lack the equivalent software layer over their own networks.

As you can see below, Bandwidth's revenue growth has been very strong over the last two years, growing from quarterly revenue of $84.7 million in Q3 FY2020, to $148.3 million. 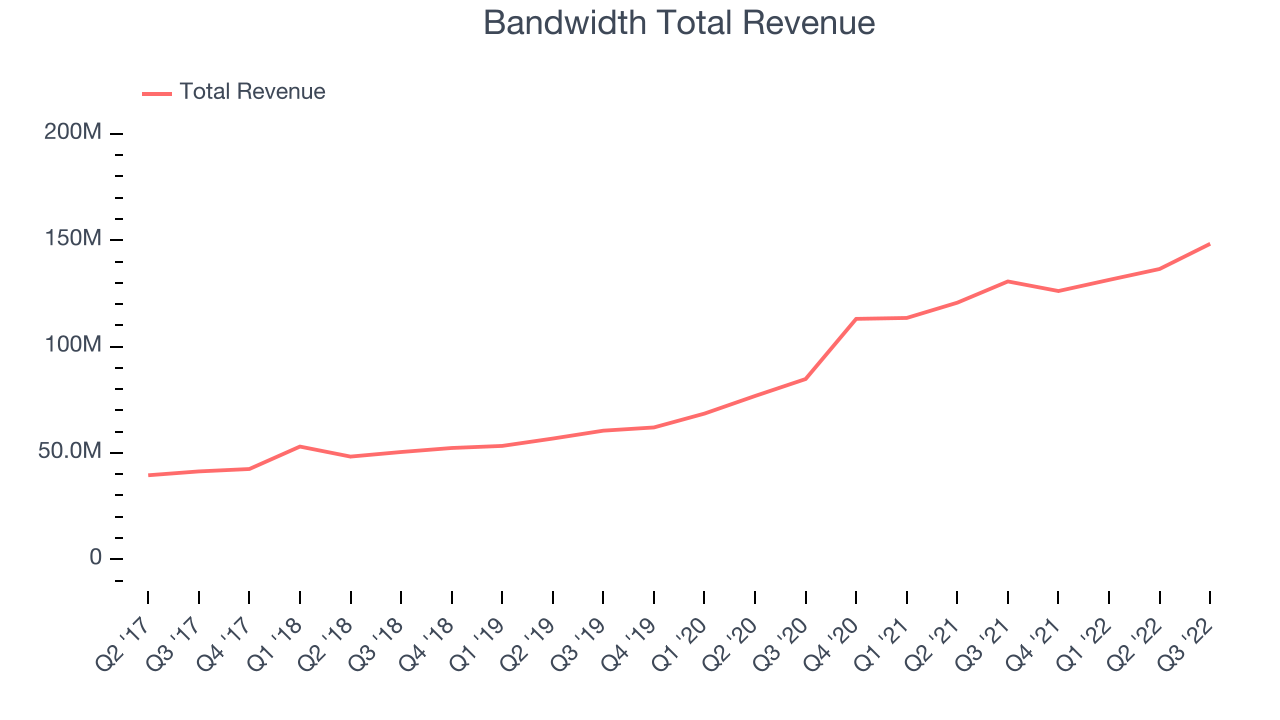 This quarter, Bandwidth's quarterly revenue was once again up 13.5% year on year. We can see that the company increased revenue by $11.8 million quarter on quarter. That's a solid improvement on the $5.12 million increase in Q2 2022, so shareholders should appreciate the acceleration of growth.

Guidance for the next quarter indicates Bandwidth is expecting revenue to grow 16.5% year on year to $147 million, improving on the 11.5% year-over-year increase in revenue the company had recorded in the same quarter last year. Ahead of the earnings results the analysts covering the company were estimating sales to grow 11.8% over the next twelve months.

You can see below that Bandwidth reported 3,380 customers at the end of the quarter, an increase of 18 on last quarter. That is a little better customer growth than last quarter but while it is still a bit below what we have typically seen over the last year, it is suggesting that the company may be reinvigorating growth. 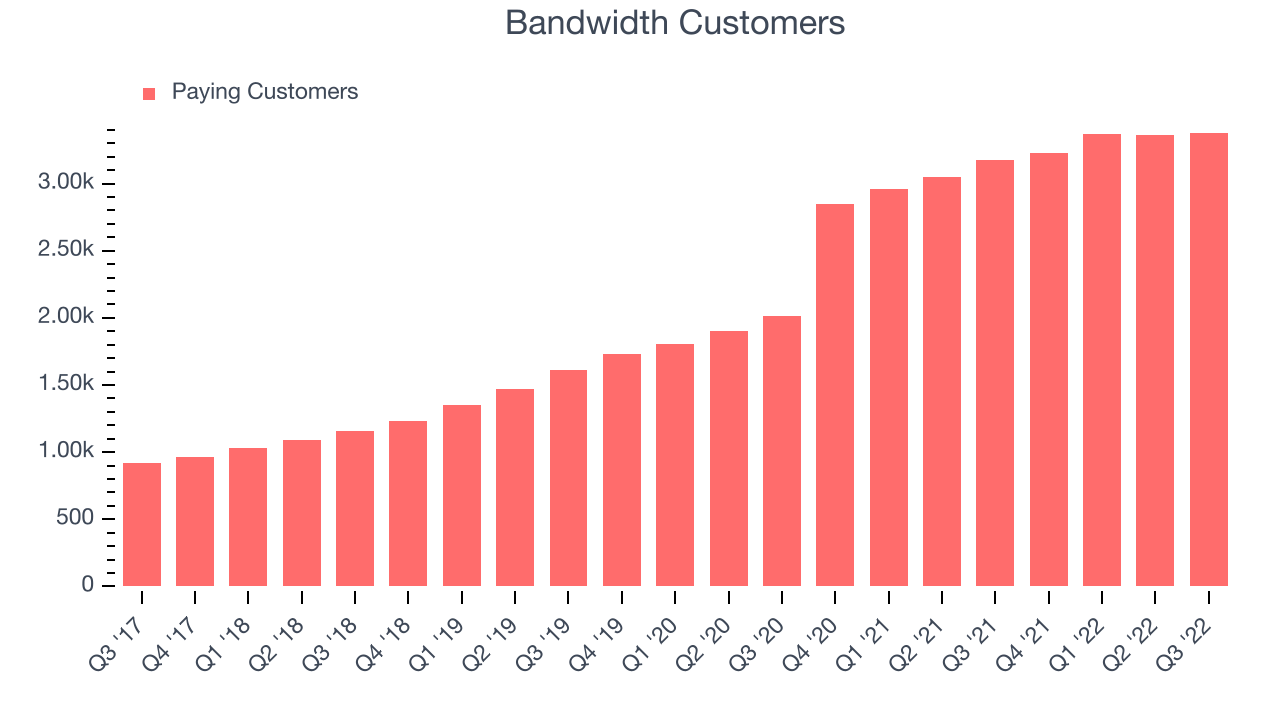 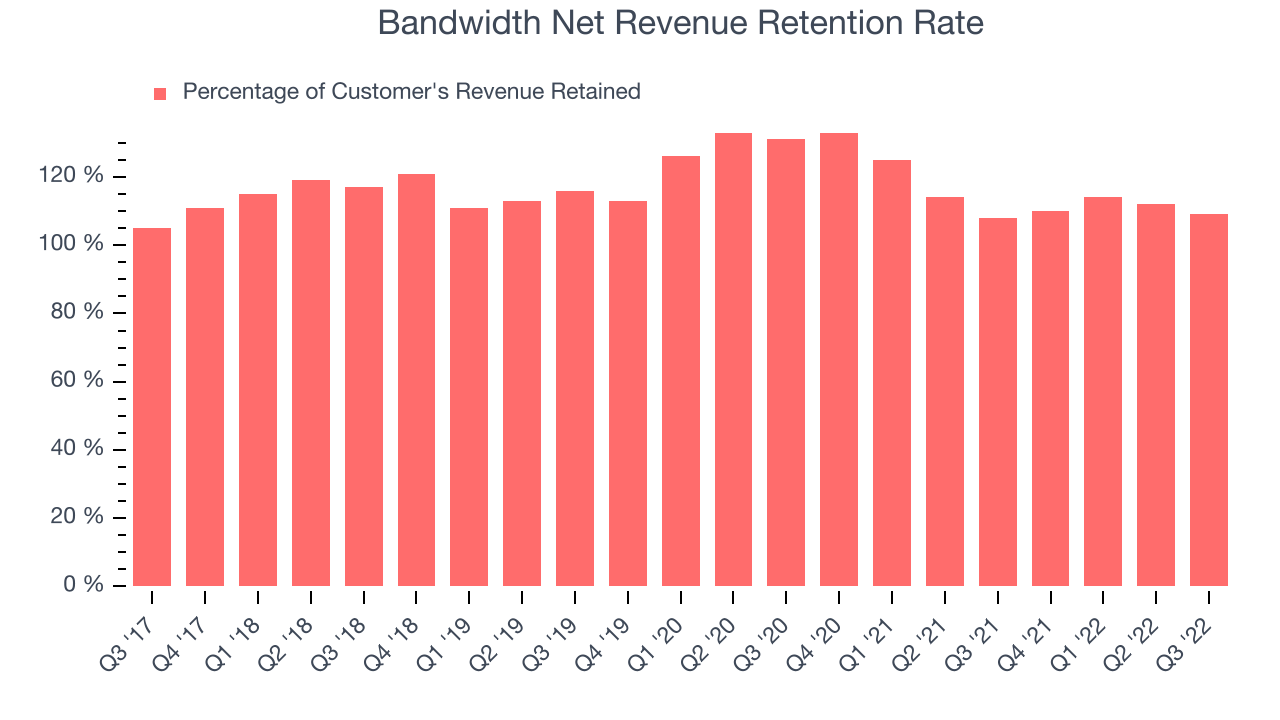 Bandwidth's net revenue retention rate, an important measure of how much customers from a year ago were spending at the end of the quarter, was at 109% in Q3. That means even if they didn't win any new customers, Bandwidth would have grown its revenue 9% year on year. Despite the recent drop this is still a decent retention rate and it shows us that Bandwidth's customers stick around and at least some of them get increasing value from its software over time.

What makes the software as a service business so attractive is that once the software is developed, it typically shouldn't cost much to provide it as an ongoing service to customers. Bandwidth's gross profit margin, an important metric measuring how much money there is left after paying for servers, licenses, technical support and other necessary running expenses was at 42.7% in Q3. 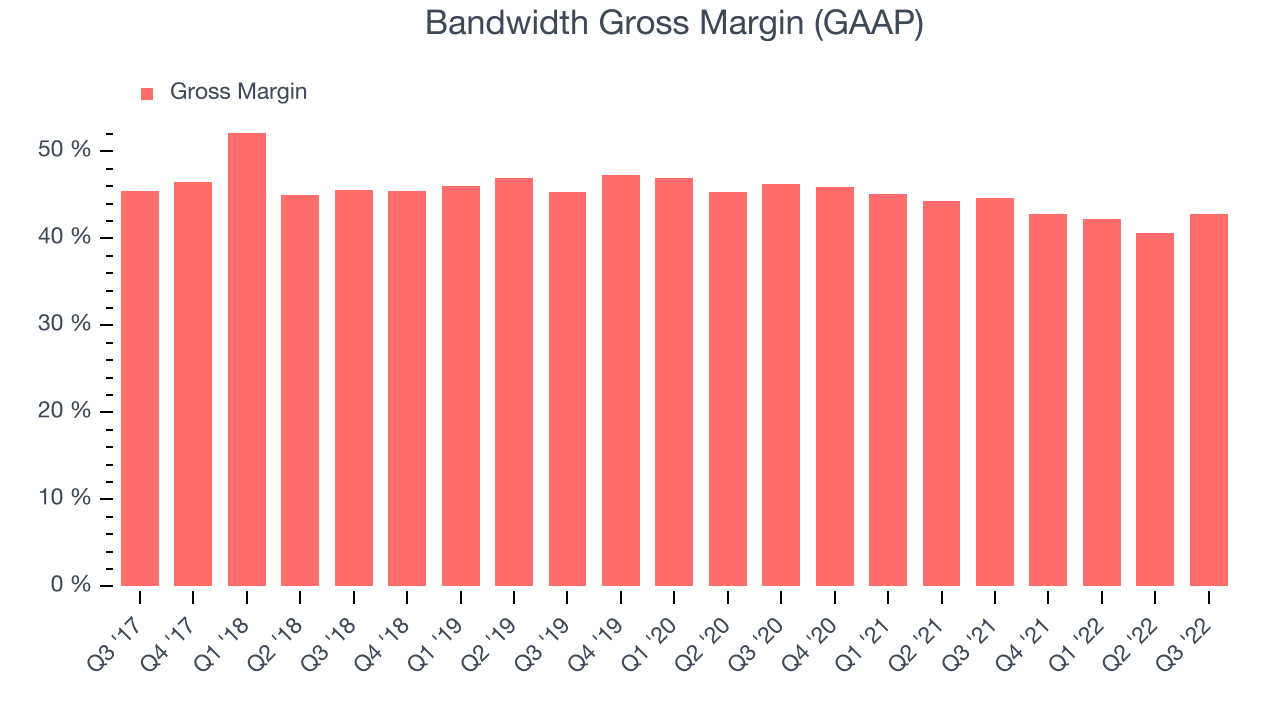 That means that for every $1 in revenue the company had $0.42 left to spend on developing new products, marketing & sales and the general administrative overhead. While it improved significantly from the previous quarter this would still be considered a low gross margin for a SaaS company and we would like to see the improvements continue.

If you follow StockStory for a while, you know that we put an emphasis on cash flow. Why, you ask? We believe that in the end cash is king, as you can't use accounting profits to pay the bills. Bandwidth's free cash flow came in at $13.4 million in Q3, up 10.7% year on year. 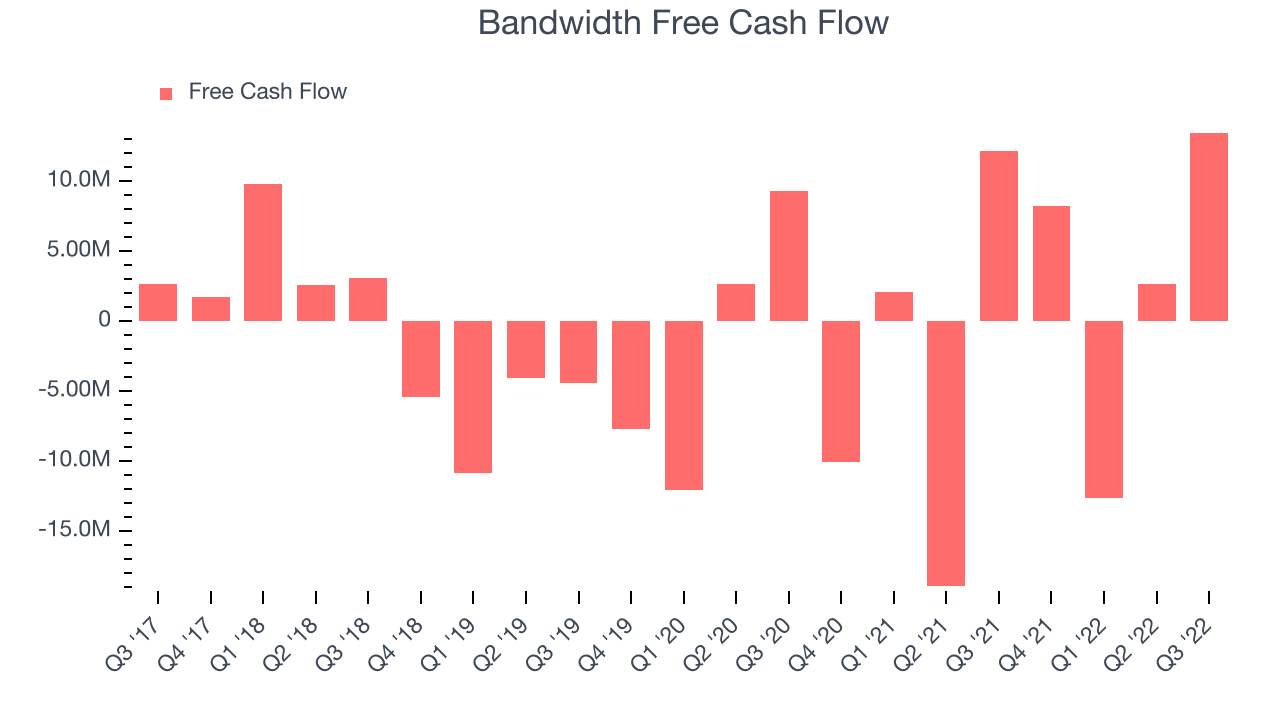 Bandwidth has generated $11.8 million in free cash flow over the last twelve months, 2.17% of revenues. This FCF margin is a result of Bandwidth asset lite business model, and provides it with at least some cash to invest in the business without depending on capital markets.

With a market capitalization of $300.3 million Bandwidth is among smaller companies, but its more than $311.5 million in cash and positive free cash flow over the last twelve months put it in a very strong position to invest in growth.

We were very impressed by Bandwidth’s very strong acceleration in customer growth this quarter. And we were also glad to see the improvement in gross margin. On the other hand, there was a deterioration in revenue retention rate. Overall, we think this was still a really good quarter, that should leave shareholders feeling very positive. The company is up 5.51% on the results and currently trades at $13 per share.

When considering Bandwidth, investors should take into account its valuation and business qualities, as well as what happened in the latest quarter. Although we have other favorites, we understand the arguments that Bandwidth is not a bad business. We would expect growth rates to moderate from here, but its revenue growth has been strong, over the last two years. And while its gross margins show its business model is much less lucrative than the best software businesses, the good news is its very efficient customer acquisition hints at the potential for strong profitability.