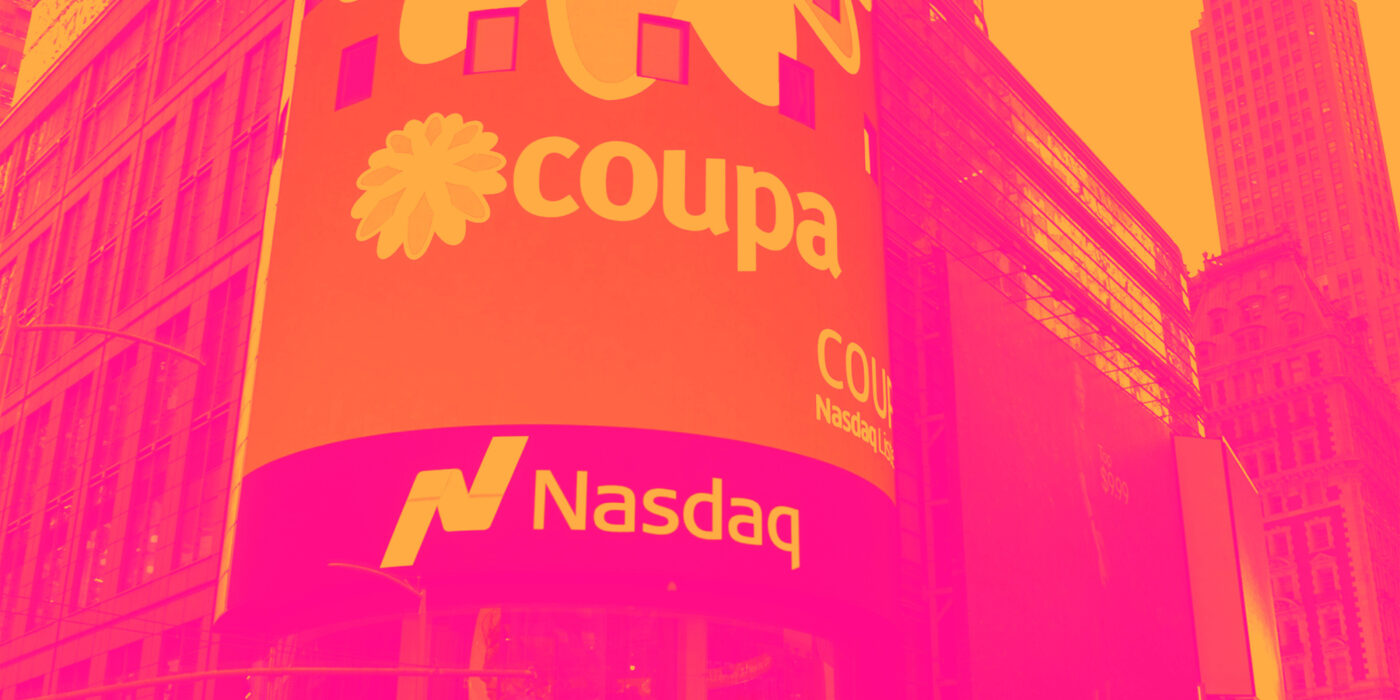 Spend management software maker Coupa Software (COUP) announced better-than-expected results in the Q1 FY2023 quarter, with revenue up 17.6% year on year to $196.3 million. Guidance for the next quarter came in at $203.5 million at the midpoint, being 0.85% below analyst estimates. Coupa made a GAAP loss of $81.2 million, improving on its loss of $100.3 million, in the same quarter last year.

Founded in 2006 by former Oracle executives, Coupa Software (COUP) is a software as a service platform that helps enterprises manage their spending across procurement, billing and business expenses and get a better visibility into how the money is spent.

The software allows a company to set up an internal e-shop through which employees procure all goods and services they need, giving the management control over who they order from. It also offers a central cloud repository for invoices and expense claims and provides an easy to use interface through which employees can manage and resolve both. Coupa then ties all this financial data together and provides reports to help companies find potential inefficiencies and rooms for improvement.

The company continues to expand its capabilities via its robust integration with third-party sales and finance platforms.

The adoption of financial technology software is propelled by an ongoing drive to reduce costs. The combination of rising transactions volumes and global supply chain complexity is driving demand for cloud based spend management platforms able to integrate the two.

As you can see below, Coupa's revenue growth has been strong over the last year, growing from quarterly revenue of $166.9 million, to $196.3 million. 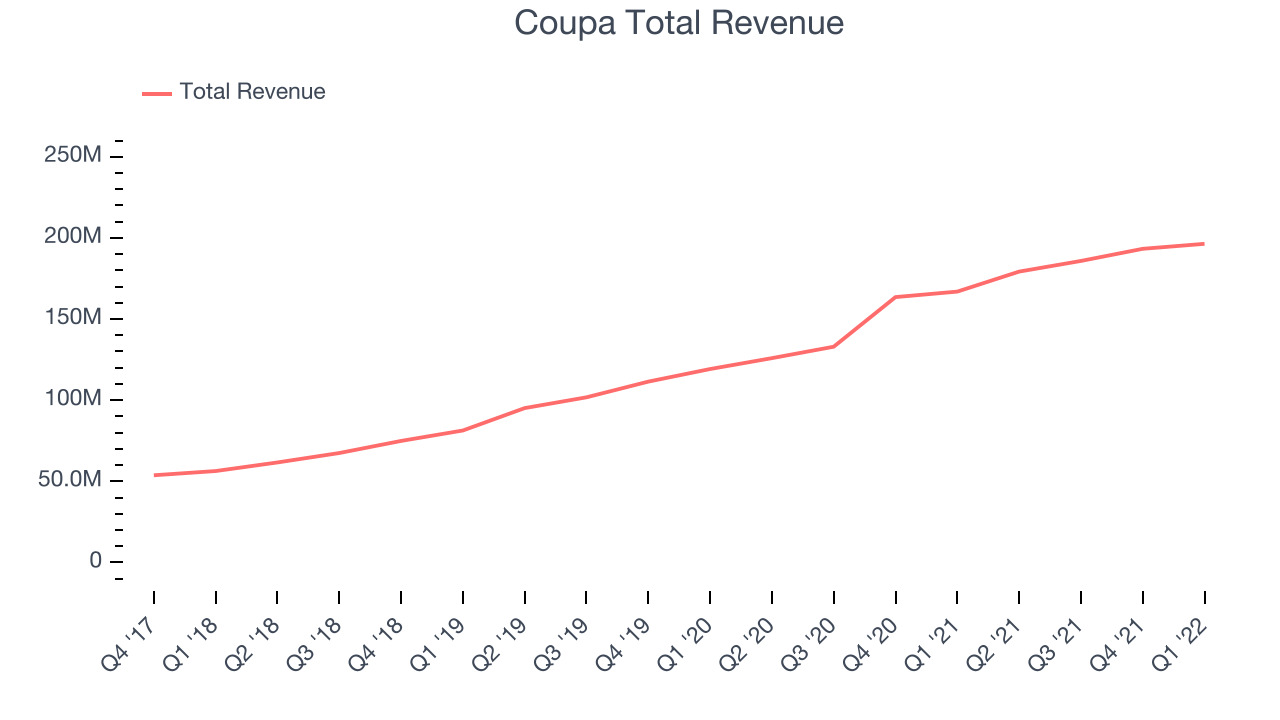 Guidance for the next quarter indicates Coupa is expecting revenue to grow 13.5% year on year to $203.5 million, slowing down from the 42.3% year-over-year increase in revenue the company had recorded in the same quarter last year. Ahead of the earnings results the analysts covering the company were estimating sales to grow 16.9% over the next twelve months.

What makes the software as a service business so attractive is that once the software is developed, it typically shouldn't cost much to provide it as an ongoing service to customers. Coupa's gross profit margin, an important metric measuring how much money there is left after paying for servers, licenses, technical support and other necessary running expenses was at 58.8% in Q1. 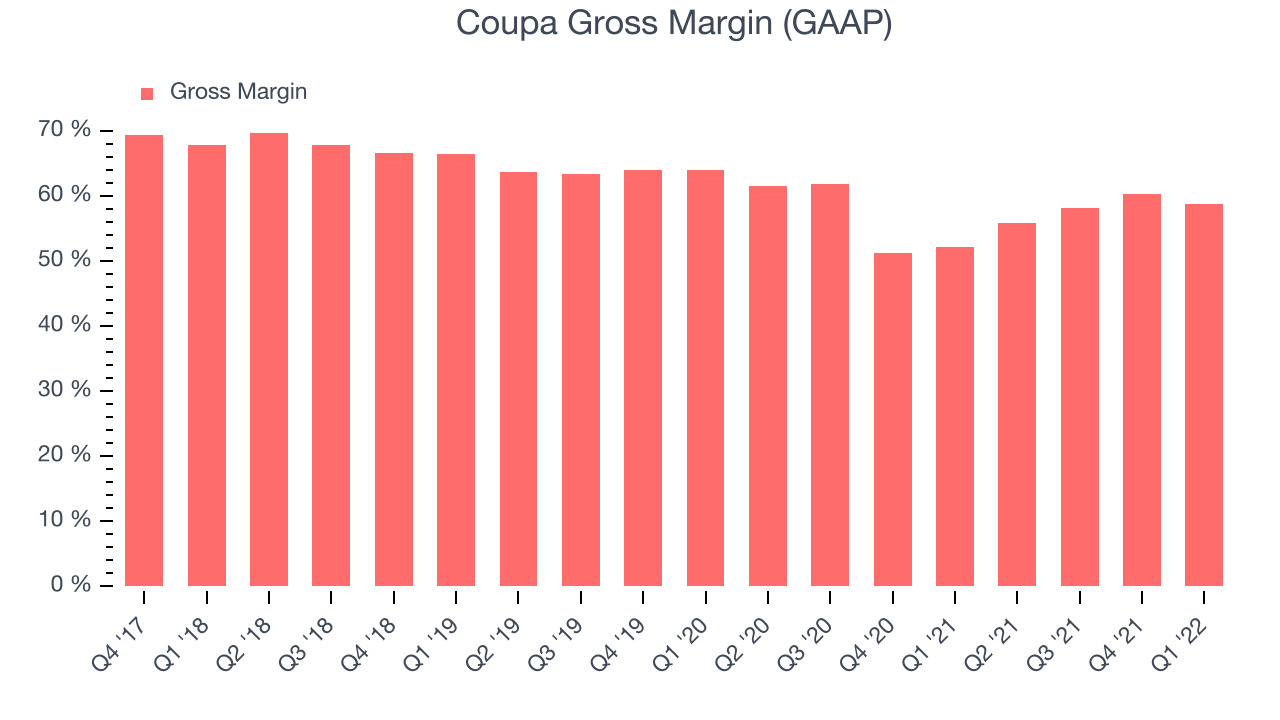 That means that for every $1 in revenue the company had $0.58 left to spend on developing new products, marketing & sales and the general administrative overhead. This would be considered a low gross margin for a SaaS company and it has dropped significantly from the previous quarter, which is probably the opposite of what shareholders would like it to do.

If you follow StockStory for a while, you know that we put an emphasis on cash flow. Why, you ask? We believe that in the end cash is king, as you can't use accounting profits to pay the bills. Coupa's free cash flow came in at $45.6 million in Q1, up 52.8% year on year. 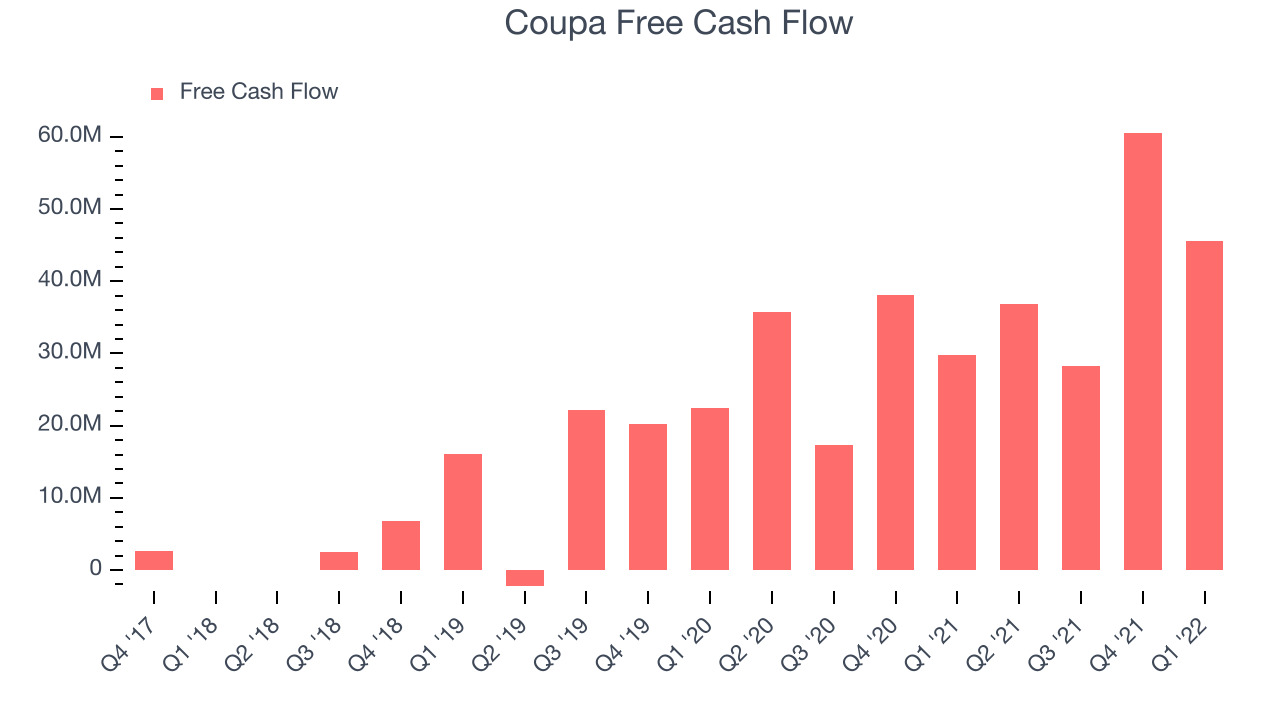 Coupa has generated $171.3 million in free cash flow over the last twelve months, an impressive 22.7% of revenues. This extremely high FCF margin is a result of Coupa asset lite business model and strong competitive positioning, and provides it the option to return capital to shareholders while still having plenty of cash to invest in the business.

With a market capitalization of $5.34 billion Coupa is among smaller companies, but its more than $786.2 million in cash and positive free cash flow over the last twelve months put it in a very strong position to invest in growth.

It was good to see Coupa outperform Wall St’s revenue expectations this quarter. That feature of these results really stood out as a positive. On the other hand gross margin deteriorated a little. Overall, this quarter's results could have been better, but the company is staying on target. The company currently trades at $57 per share.

When considering Coupa, investors should take into account its valuation and business qualities, as well as what happened in the latest quarter. We cheer for everyone who is making the lives of others easier through technology, but in case of Coupa we will be cheering from the sidelines. Its revenue growth has been strong, though we don't expect it to maintain historical growth rates. But while its bountiful generation of free cash flow empowers it to invest in growth initiatives, unfortunately its gross margins show its business model is much less lucrative than the best software businesses.

Coupa's price to sales ratio based on the next twelve months is 6.1x, suggesting that the market does have lower expectations of the business, relative to the high growth tech stocks. While we have no doubt one can find things to like about the company, and the price is not completely unreasonable, we think that at the moment there might be better opportunities in the market.