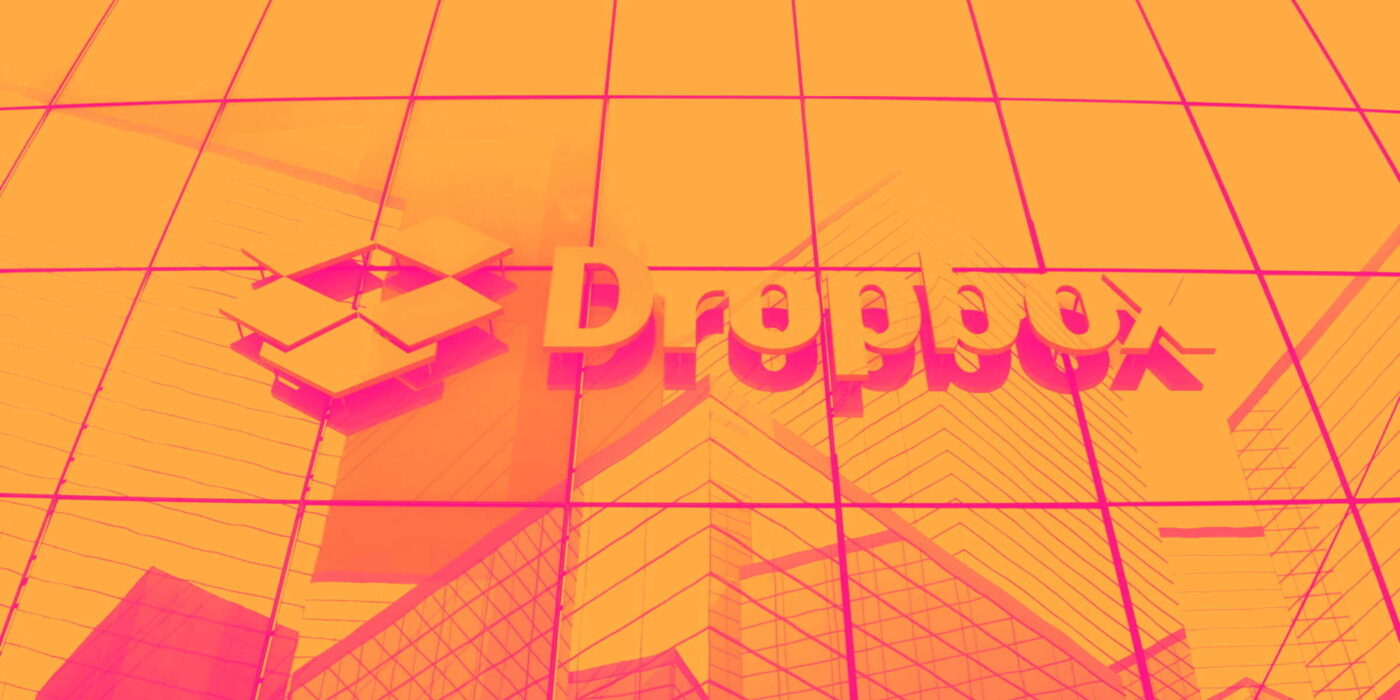 Dropbox (NASDAQ:DBX) Reports Q3 In Line With Expectations But Customer Growth Slows Down

Cloud storage and e-signature company Dropbox (Nasdaq: DBX) reported results in line with analyst expectations in Q3 FY2022 quarter, with revenue up 7.41% year on year to $591 million. Dropbox made a GAAP profit of $83.2 million, improving on its profit of $75.6 million, in the same quarter last year.

Houston came up with the idea when he realised that he didn't have his work USB drive on him, while sitting on a bus to New York for a weekend. He saw that a shared folder on the cloud would remove the need for a physical drive and he started coding the product (for himself) while still on the bus. And so blossomed a passion for the file-sharing product, which he named Dropbox after the communal folder he and his friends would use during LAN parties, back in their teens. Today, over half a million organisations use Dropbox to securely store and collaborate on all manner of file types.

From its inception, Dropbox saw viral growth because when one person used it to share a folder with another, the second person would have to create a dropbox account. From the early days, it was clear that Dropbox would face a crowded field, but by moving first and growing free users quickly, the company was able to become a trusted name in cloud storage. Since then, it has expanded into electronic signatures, but to this day organisations can sign up and try the solution for free, at least initially.

The catch phrase "digital transformation" originally referred to the digitization of documents within enterprises. The growth of digital documents has spurred an explosion of collaboration within and between businesses, which in turn is driving the demand for e-signature and content management platforms.

As you can see below, Dropbox's revenue growth has been unremarkable over the last two years, growing from quarterly revenue of $487.4 million in Q3 FY2020, to $591 million. 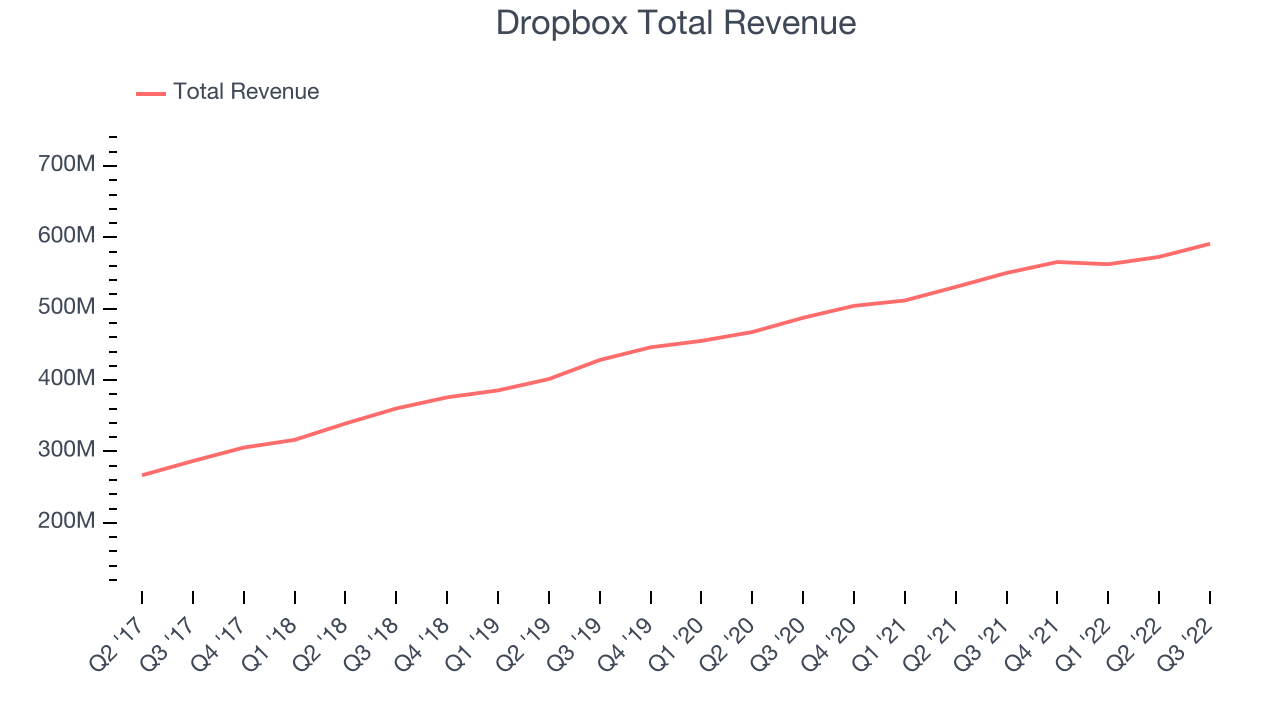 Dropbox's quarterly revenue was only up 7.41% year on year, which might disappoint some shareholders. We can see that the company increased revenue by $18.3 million quarter on quarter re-accelerating up on $10.3 million in Q2 2022.

Ahead of the earnings results the analysts covering the company were estimating sales to grow 5.48% over the next twelve months.

You can see below that Dropbox reported 17,550,000 customers at the end of the quarter, an increase of 180,000 on last quarter. That is a little slower customer growth than what we are used to seeing lately, suggesting that the customer acquisition momentum is slowing a little bit. 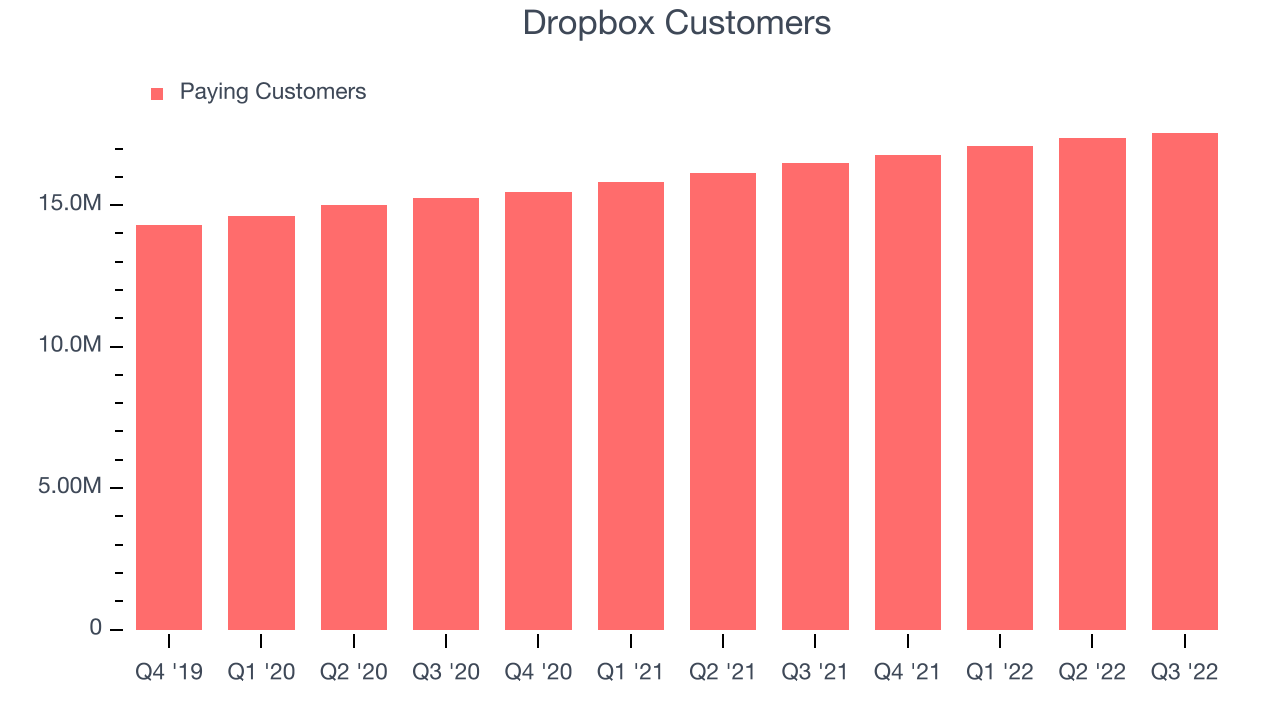 What makes the software as a service business so attractive is that once the software is developed, it typically shouldn't cost much to provide it as an ongoing service to customers. Dropbox's gross profit margin, an important metric measuring how much money there is left after paying for servers, licenses, technical support and other necessary running expenses was at 81.4% in Q3. 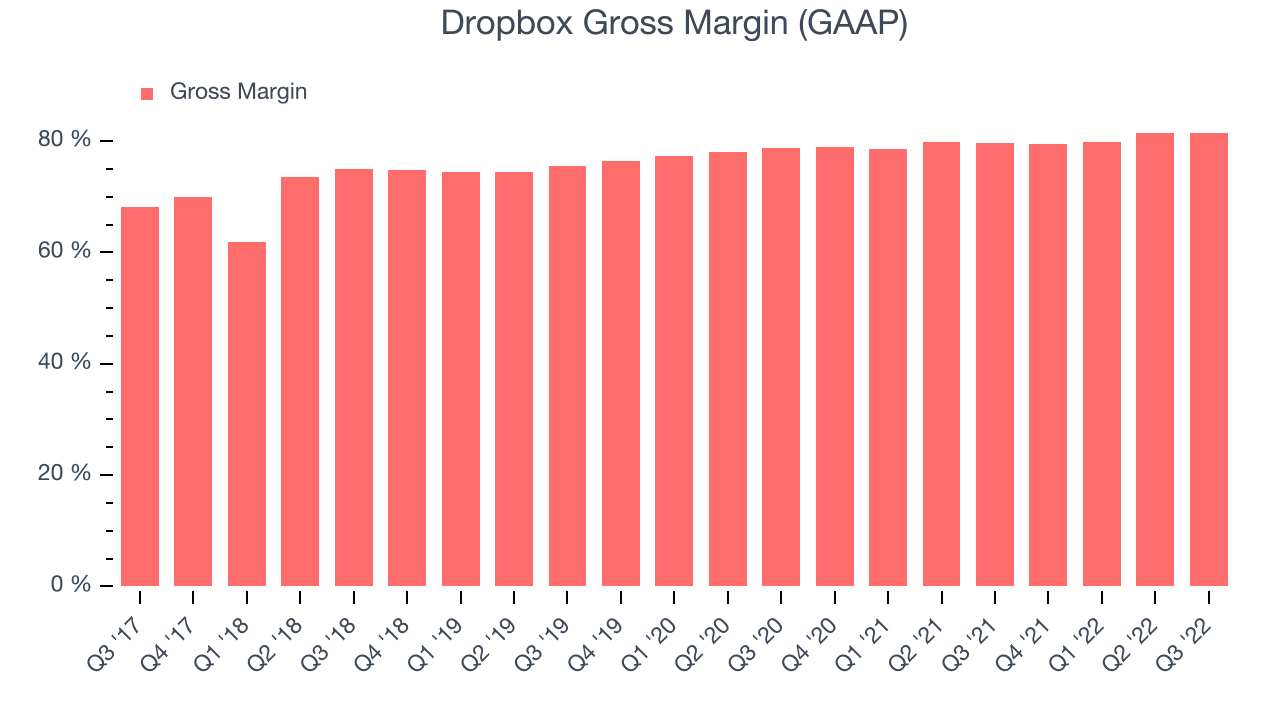 That means that for every $1 in revenue the company had $0.81 left to spend on developing new products, marketing & sales and the general administrative overhead. This is a great gross margin, that allows companies like Dropbox to fund large investments in product and sales during periods of rapid growth and be profitable when they reach maturity. It is good to see that the gross margin is staying stable which indicates that Dropbox is doing a good job controlling costs and is not under pressure from competition to lower prices.

If you follow StockStory for a while, you know that we put an emphasis on cash flow. Why, you ask? We believe that in the end cash is king, as you can't use accounting profits to pay the bills. Dropbox's free cash flow came in at $245.2 million in Q3, up 10.6% year on year. 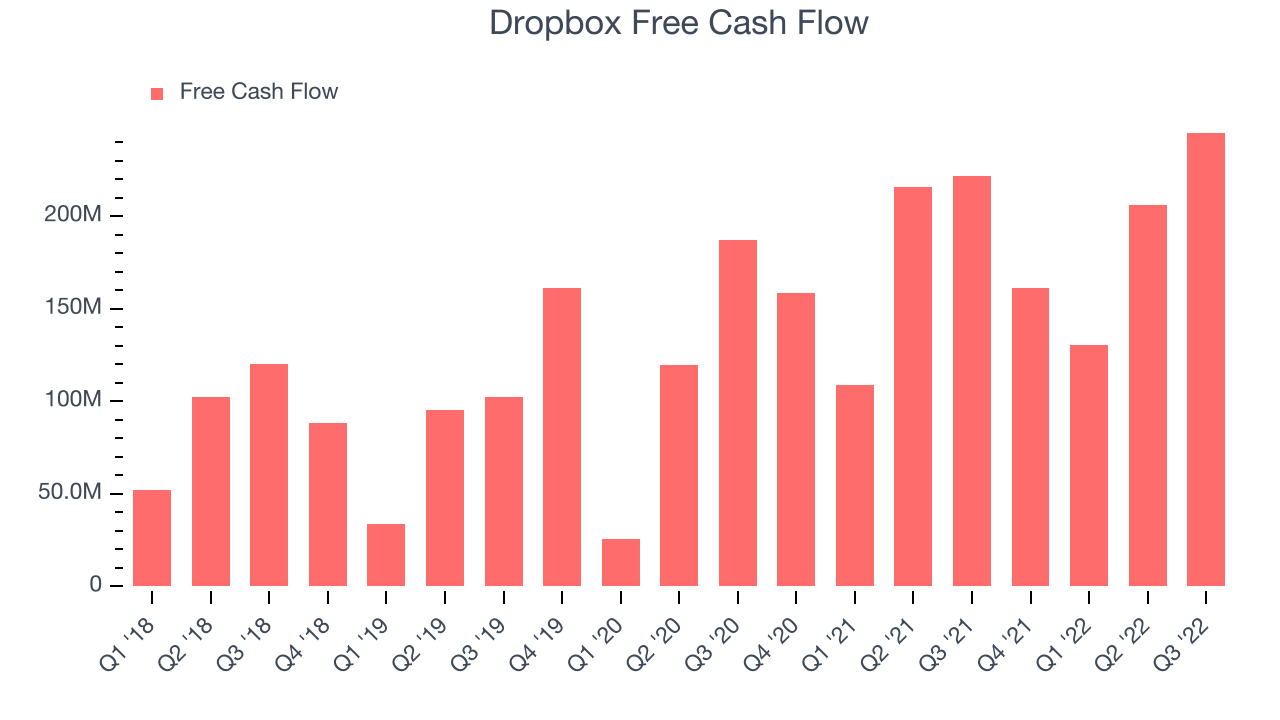 Dropbox has generated $743.2 million in free cash flow over the last twelve months, an impressive 32.4% of revenues. This robust FCF margin is a result of Dropbox asset lite business model, scale advantages, and strong competitive positioning, and provides it the option to return capital to shareholders while still having plenty of cash to invest in the business.

With a market capitalization of $7.4 billion Dropbox is among smaller companies, but its more than $1.45 billion in cash and positive free cash flow over the last twelve months put it in a very strong position to invest in growth.

This was a decent quarter for Dropbox with solid free cash flow and in-line results on the top line. On the other hand, there was a slowdown in customer growth. The company is up 4.88% on the results and currently trades at $21.45 per share.

Dropbox may have had a bad quarter, but investors should also consider its valuation and business qualities, when assessing the investment opportunity. Although we have other favorites, we understand the arguments that Dropbox is not a bad business. However, its revenue growth has been weak, and analysts expect growth rates to deteriorate from there. But on a positive note, its very efficient customer acquisition hints at the potential for strong profitability.

Dropbox's price to sales ratio based on the next twelve months is 3.0x, suggesting that the market is expecting more moderate growth, relative to the hottest tech stocks. In the end, beauty is in the eye of the beholder. While Dropbox wouldn't be our first pick, if you like the business, the shares are trading at a pretty interesting price point right now.