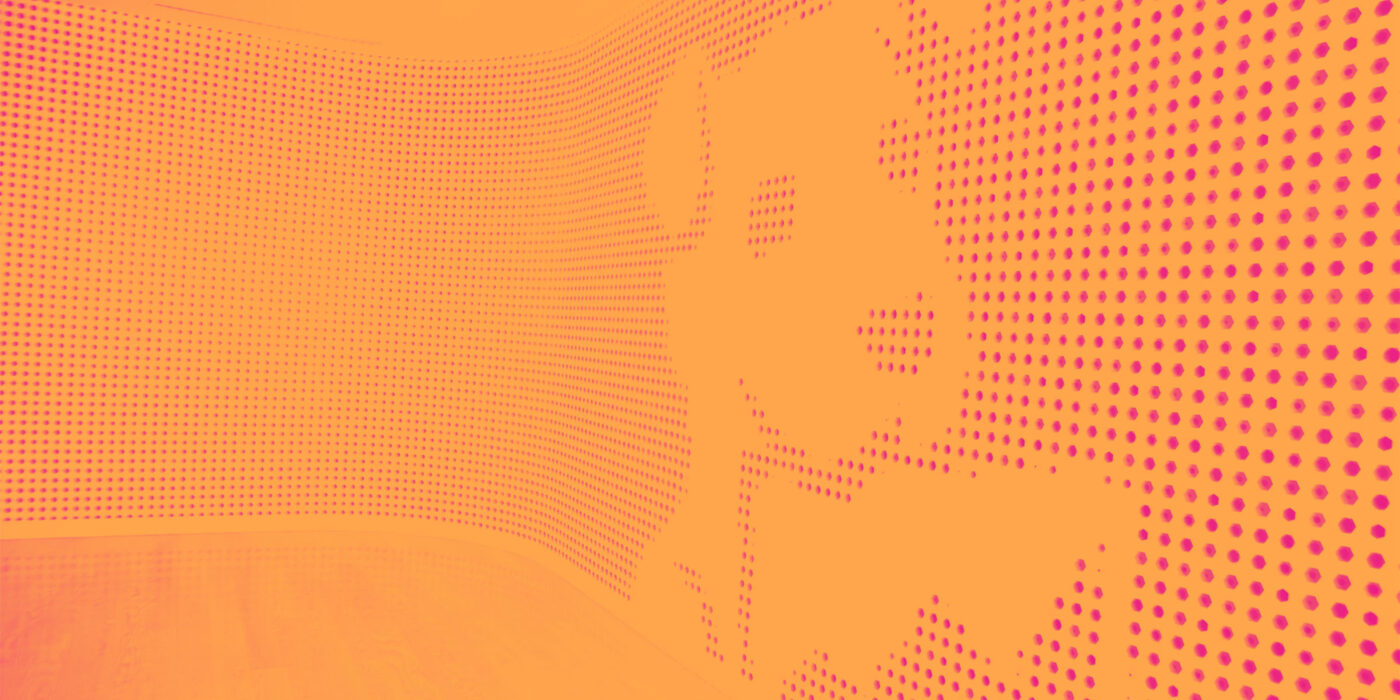 Cloud monitoring software company Datadog (NASDAQ:DDOG) announced better-than-expected results in the Q1 FY2022 quarter, with revenue up 82.8% year on year to $363 million. On top of that, guidance for next quarter's revenue was surprisingly good, being $378 million at the midpoint, 4.52% above what analysts were expecting. Datadog made a GAAP profit of $9.73 million, improving on its loss of $13 million, in the same quarter last year.

Named after a database the founders had to painstakingly look after at their previous company, Datadog (NASDAQ:DDOG) is a software as a service platform that makes it easier to monitor cloud infrastructure and applications.

Founded in 2010, Datadog was designed to help companies that were then just starting to move from legacy on-premise servers to hosting their systems in the cloud. Because the rate of deployment of software increased from weeks to days and hours, the engineering teams needed a way to observe their cloud infrastructure in real-time.

Datadog seamlessly integrates into a company’s tech stack and pulls all the metrics that matter for different cloud services and databases and makes them available in a single real-time dashboard. The shared dashboard then makes it easy for different teams in the company to collaborate when investigating why a service broke down or became really slow.

Cloud infrastructure monitoring is becoming a competitive space and Datadog is competing with offerings from New Relic (NYSE:NEWR), Elastic (NYSE:ESTC), Splunk (NASDAQ:SPLK), monitoring tools made by the cloud providers themselves and up and coming startups like Better Stack.

As you can see below, Datadog's revenue growth has been incredible over the last year, growing from quarterly revenue of $198.5 million, to $363 million. 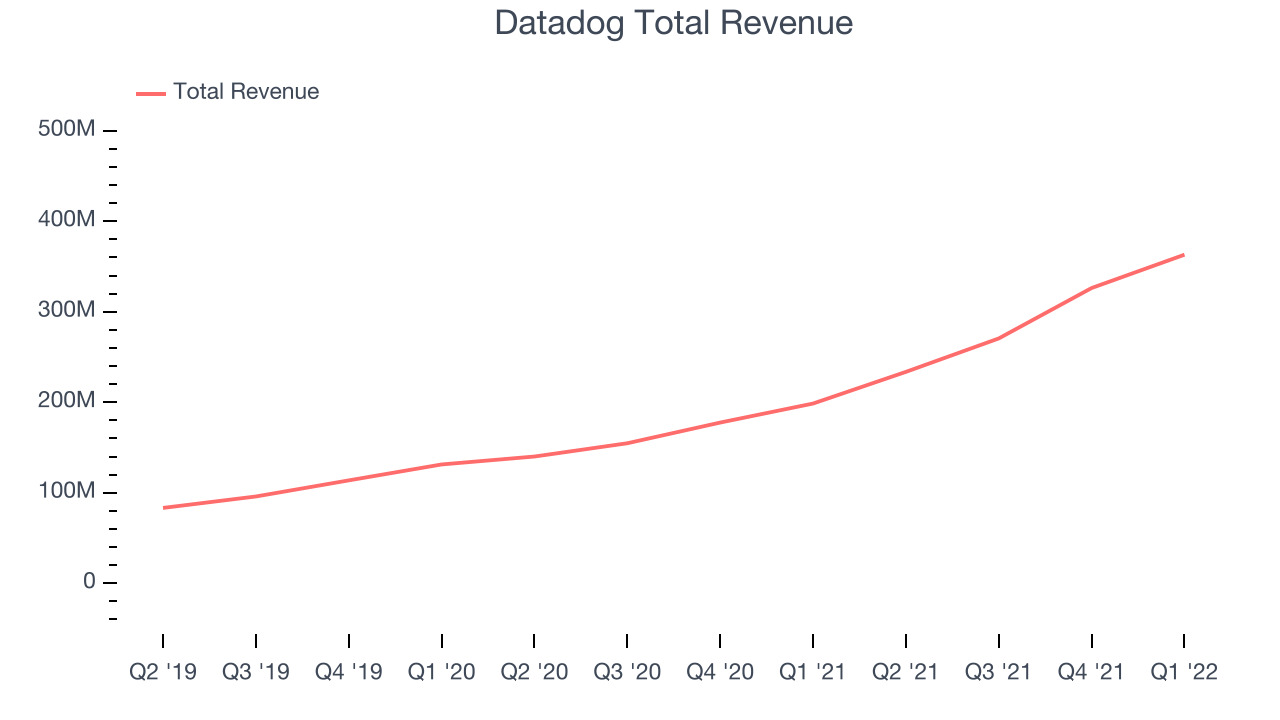 Guidance for the next quarter indicates Datadog is expecting revenue to grow 61.8% year on year to $378 million, in line with the 66.8% year-over-year increase in revenue the company had recorded in the same quarter last year. Ahead of the earnings results the analysts covering the company were estimating sales to grow 40.6% over the next twelve months.

You can see below that at the end of the quarter Datadog reported 2,250 enterprise customers paying more than $100,000 annually, an increase of 240 on last quarter. That is quite a bit more contract wins than last quarter and quite a bit above what we have typically seen lately, demonstrating that the business itself has good sales momentum. We've no doubt shareholders will take this as an indication that the company's go-to-market strategy is working very well. 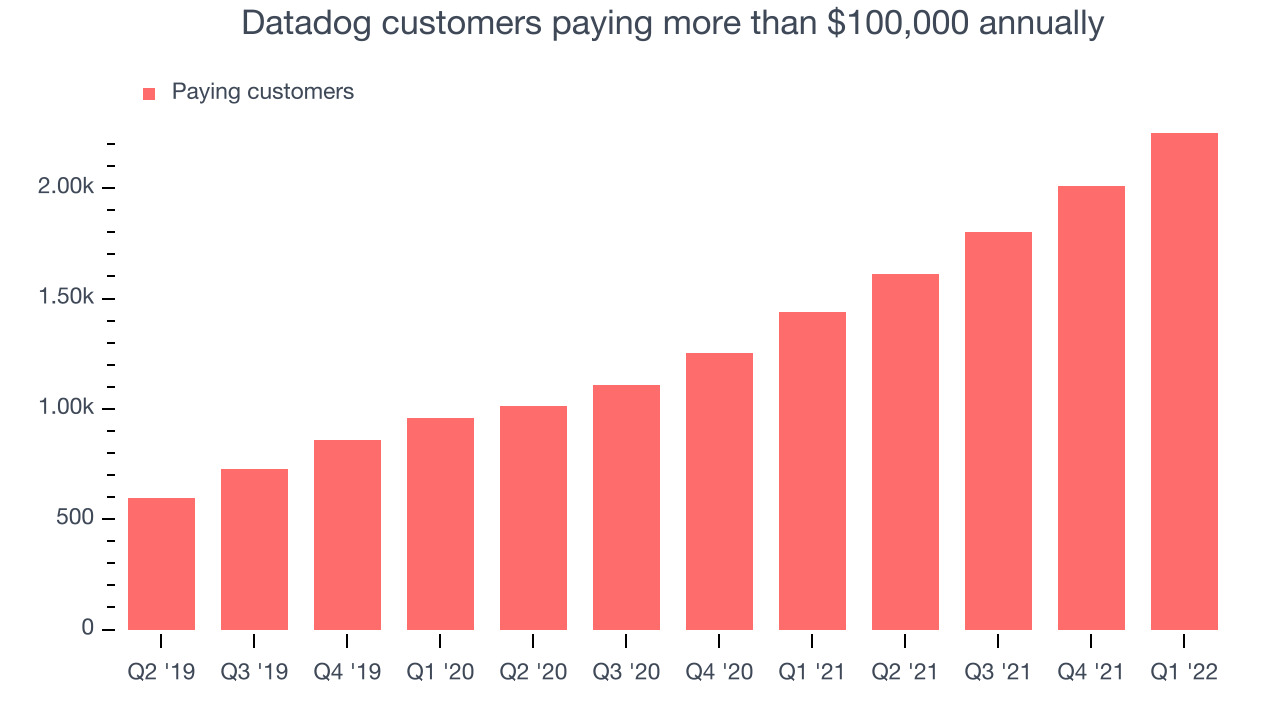 What makes the software as a service business so attractive is that once the software is developed, it typically shouldn't cost much to provide it as an ongoing service to customers. Datadog's gross profit margin, an important metric measuring how much money there is left after paying for servers, licenses, technical support and other necessary running expenses was at 79.4% in Q1. 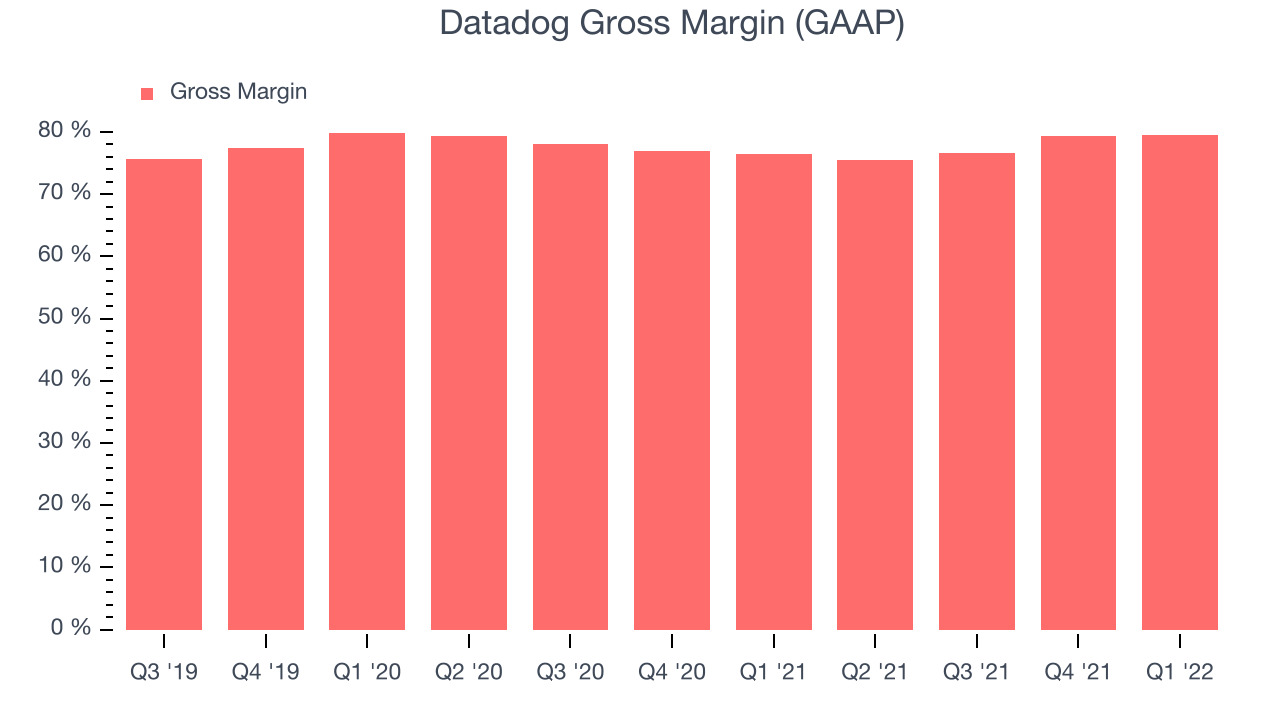 That means that for every $1 in revenue the company had $0.79 left to spend on developing new products, marketing & sales and the general administrative overhead. Trending up over the last year, this is a good gross margin that allows companies like Datadog to fund large investments in product and sales during periods of rapid growth and be profitable when they reach maturity.

If you follow StockStory for a while, you know that we put an emphasis on cash flow. Why, you ask? We believe that in the end cash is king, as you can't use accounting profits to pay the bills. Datadog's free cash flow came in at $129.9 million in Q1, up 192% year on year. 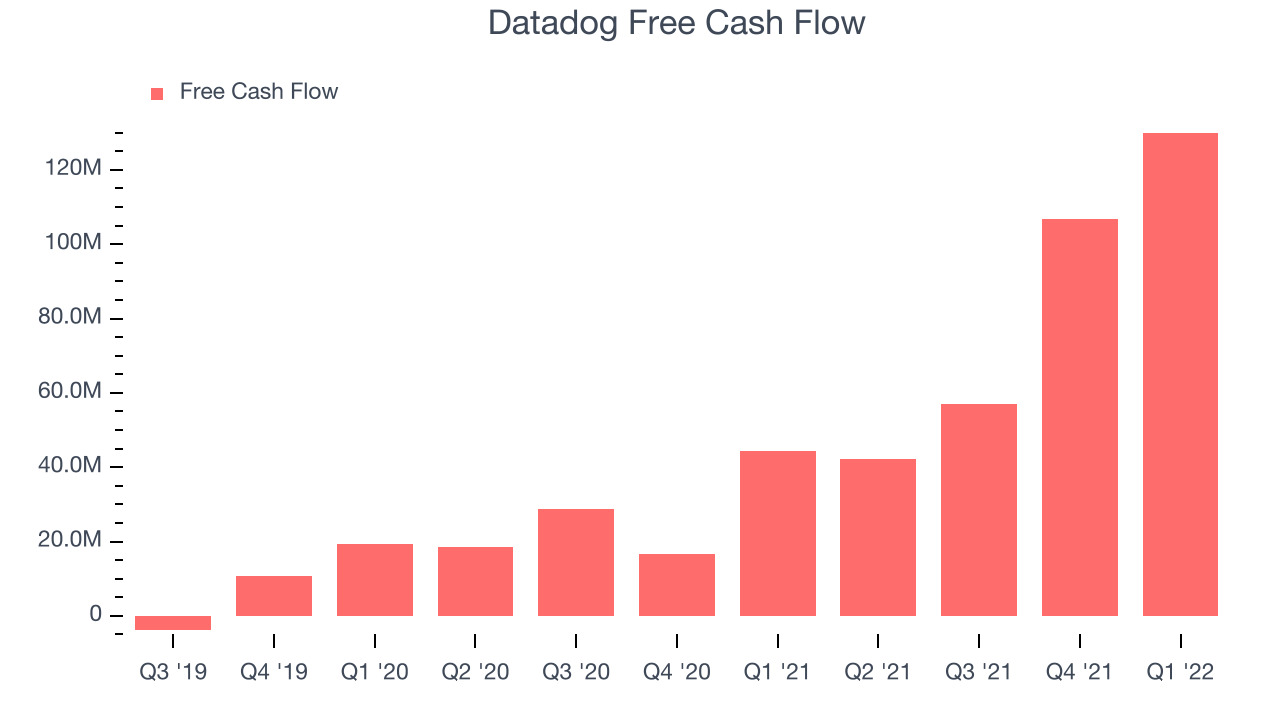 Datadog has generated $335.9 million in free cash flow over the last twelve months, an impressive 28.1% of revenues. This robust FCF margin is a result of Datadog asset lite business model, scale advantages, and strong competitive positioning, and provides it the option to return capital to shareholders while still having plenty of cash to invest in the business.

With a market capitalization of $37.4 billion, more than $1.67 billion in cash and with free cash flow over the last twelve months being positive, the company is in a very strong position to invest in growth.

We were impressed by the exceptional revenue growth Datadog delivered this quarter. And we were also glad that the revenue guidance for the rest of the year exceeded expectations. Zooming out, we think this was a great quarter and shareholders will likely feel excited about the results. But the market was likely expecting more and the company is down 11.4% on the results and currently trades at $105.5 per share.

Datadog may have had a good quarter, but investors should also consider its valuation and business qualities, when assessing the investment opportunity. There are a number of reasons why we think Datadog is a great business. While we would expect growth rates to moderate from here, its revenue growth has been exceptional, over the last two years. On top of that, its very efficient customer acquisition hints at the potential for strong profitability, and its bountiful generation of free cash flow empowers it to invest in growth initiatives.

The market is certainly expecting long term growth from Datadog given its price to sales ratio based on the next twelve months is 24.8x. But looking at the tech landscape today, Datadog's qualities as one of the best businesses really stand out and we still like it at this price, despite the higher multiple.

The Wall St analysts covering the company had a one year price target of $198 per share right before these results, implying that they saw upside in buying Datadog even in the short term.