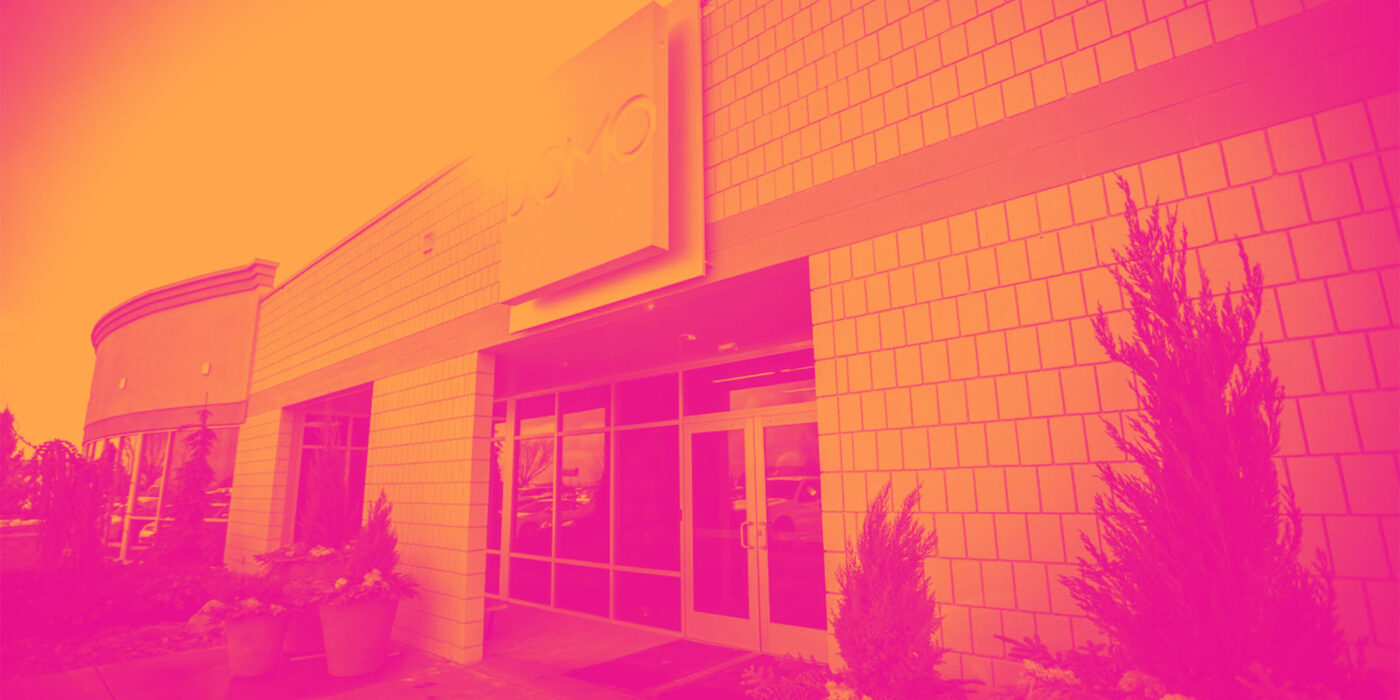 Data visualisation and business intelligence company Domo (NASDAQ:DOMO) beat analyst expectations in Q4 FY2022 quarter, with revenue up 23.1% year on year to $69.9 million. On top of that, guidance for next quarter's revenue was surprisingly good, being $74 million at the midpoint, 5.64% above what analysts were expecting. Domo made a GAAP loss of $33.2 million, down on its loss of $19.6 million, in the same quarter last year.

Serial entrepreneur Josh James founded the company, after selling his prior company, Omniture, to Adobe (NASDAQ:ADBE). He had noticed that it was very difficult for the management to understand the vital signs of their company since data around various metrics such as staff numbers, retention rates, and customer acquisition costs were often held in disparate systems.

Today, Domo allows decision makers to monitor all these things and more from their phone and can draw data from thousands of sources, such as disparate points of sales across a large franchisee network.

For example, pharmaceutical companies rely on Domo's software to track the temperature of perishable products as they travel through the supply chain via real time updates. This helps them to test different refrigeration systems to know which one performs best, ensuring they save costs and deliver their products faster to users.

Organizations generate a lot of data that is stored in silos, often in incompatible formats, making it slow and costly to extract actionable insights, which in turn drives demand for modern cloud-based data analysis platforms that can efficiently analyze the silo-ed data.

In the business intelligence space, Domo is competing with Tableau (owned by Salesforce), Microsoft (NASDAQ:MSFT), and SAP (NYSE:SAP).

As you can see below, Domo's revenue growth has been strong over the last year, growing from quarterly revenue of $56.8 million, to $69.9 million. 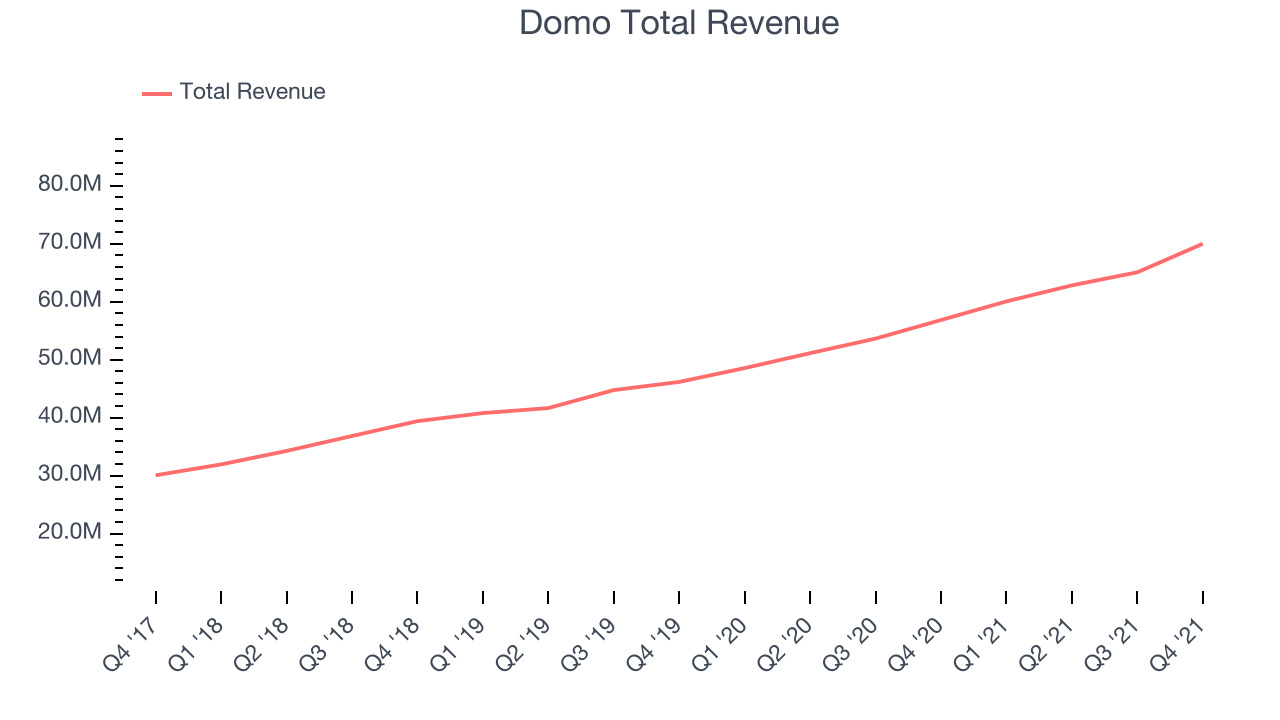 This quarter, Domo's quarterly revenue was once again up a very solid 23.1% year on year. On top of that, revenue increased $4.91 million quarter on quarter, a very strong improvement on the $2.25 million increase in Q3 2022, which shows acceleration of growth, and is great to see.

Guidance for the next quarter indicates Domo is expecting revenue to grow 23.2% year on year to $74 million, in line with the 23.6% year-over-year increase in revenue the company had recorded in the same quarter last year. For the upcoming financial year management expects revenue to be $316.5 million at the midpoint, growing 22.6% compared to 22.7% increase in FY2022.

What makes the software as a service business so attractive is that once the software is developed, it typically shouldn't cost much to provide it as an ongoing service to customers. Domo's gross profit margin, an important metric measuring how much money there is left after paying for servers, licenses, technical support and other necessary running expenses was at 73.5% in Q4. 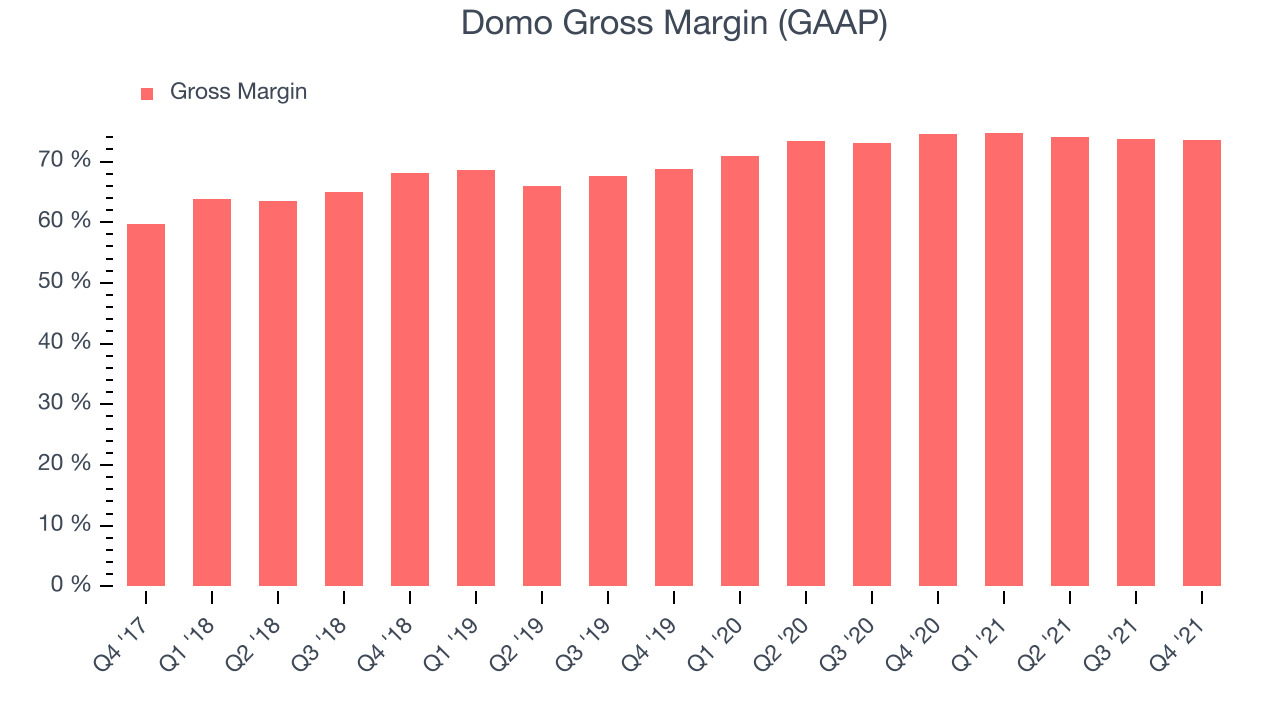 That means that for every $1 in revenue the company had $0.73 left to spend on developing new products, marketing & sales and the general administrative overhead. This is around the average of what we typically see in SaaS businesses, but it is good to see that the gross margin is staying stable which indicates that Domo is doing a good job controlling costs and is not under pressure from competition to lower prices.

If you follow StockStory for a while, you know that we put an emphasis on cash flow. Why, you ask? We believe that in the end cash is king, as you can't use accounting profits to pay the bills. Domo burned through $643 thousand in Q4, with cash flow turning negative year on year.

Domo has burned through $2 million in cash over the last twelve months, resulting in a negative 0.77% free cash flow margin. This below average FCF margin is a result of Domo's need to invest in the business to continue penetrating its market.

With a market capitalization of $1.45 billion Domo is among smaller companies, but its more than $83.5 million in cash and the fact it is operating close to free cash flow break-even put it in a robust financial position to invest in growth.

We were impressed by the very optimistic revenue guidance Domo provided for the next quarter. And we were also glad that the revenue guidance for the rest of the year exceeded expectations. Overall, we think this was a really good quarter, that should leave shareholders feeling very positive. The company is up 4.87% on the results and currently trades at $46 per share.

Domo may have had a good quarter, but investors should also consider its valuation and business qualities, when assessing the investment opportunity. We cheer for everyone who is making the lives of others easier through technology, but in case of Domo we will be cheering from the sidelines. Its revenue growth has been solid. But while its strong gross margins suggest it can operate profitably and sustainably, unfortunately its customer acquisition is less efficient than many comparable companies.

Domo's price to sales ratio based on the next twelve months is 4.8x, suggesting that the market does have lower expectations of the business, relative to the high growth tech stocks. While we have no doubt one can find things to like about the company, and the price is not completely unreasonable, we think that at the moment there might be better opportunities in the market.