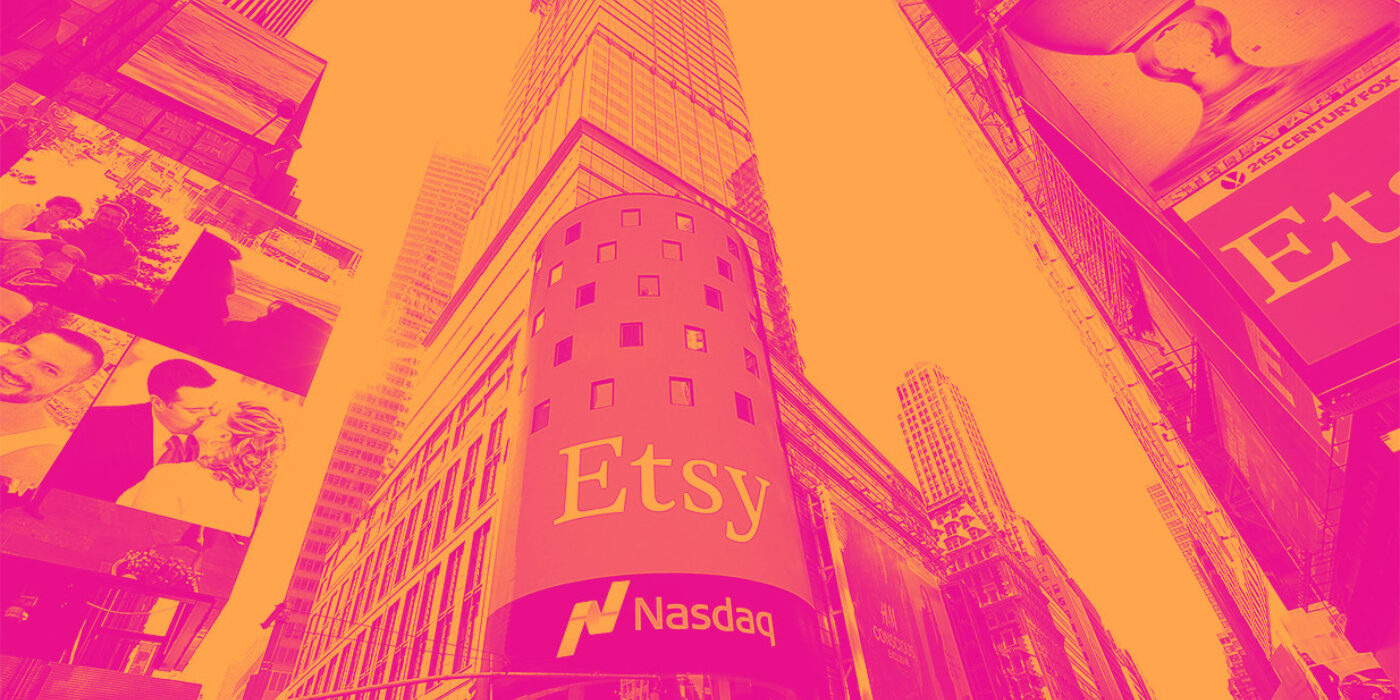 Online marketplace Etsy (NASDAQ: ETSY) reported results in line with analyst expectations in Q1 FY2022 quarter, with revenue up 5.19% year on year to $579.2 million. However, guidance for the next quarter was less impressive, coming in at $565 million at the midpoint, being 9.92% below analyst estimates. Etsy made a GAAP profit of $86.1 million, down on its profit of $143.7 million, in the same quarter last year.

Is now the time to buy Etsy? Access our full analysis of the earnings results here, it's free.

"Despite continued uncertainty and macroeconomic headwinds, Etsy continues to rise to the occasion to deliver solid results that show us maintaining most of the gains reported during the extremely strong year-ago period," said Josh Silverman, Etsy, Inc. CEO.

Etsy's revenue growth over the last three years has been incredible, averaging 61.3% annually. The initial impact of the pandemic was positive for Etsy's revenue, but growth rates subsequently normalized. 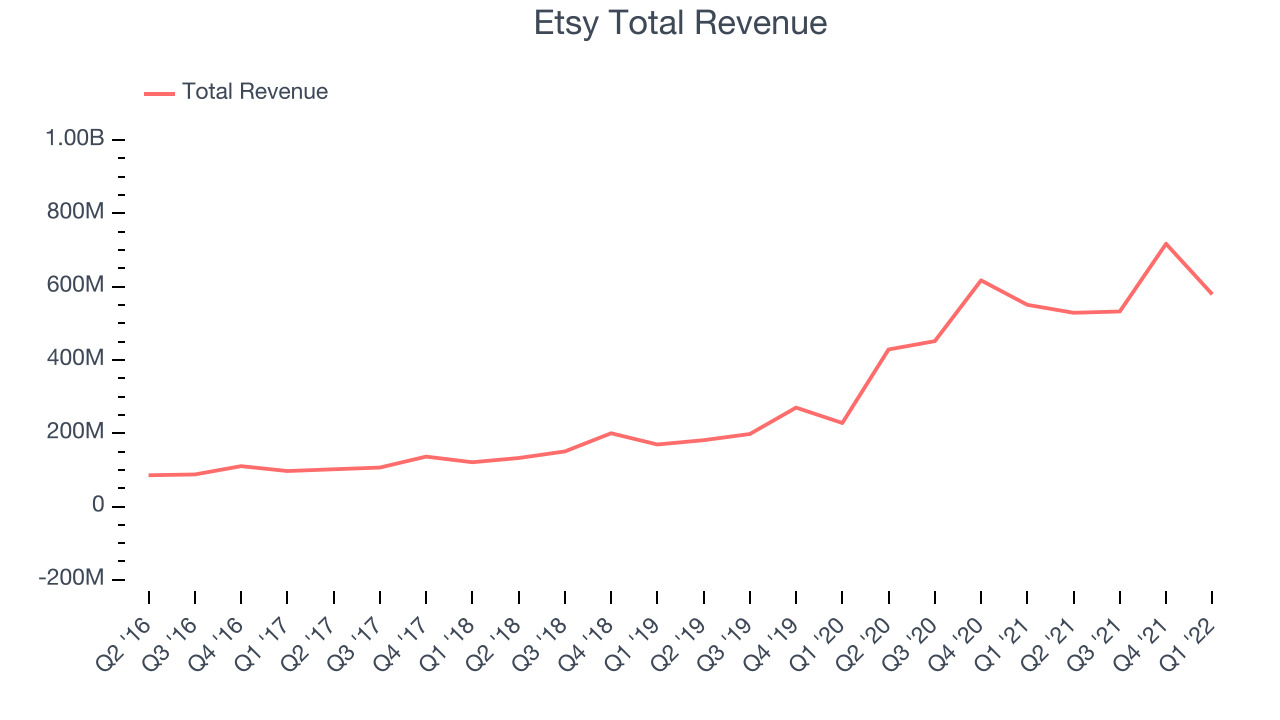 This quarter, Etsy reported an mediocre 5.19% year on year revenue growth, roughly in line with what analysts expected.

Guidance for the next quarter indicates Etsy is expecting revenue to grow 6.82% year on year to $565 million, slowing down from the 23.3% year-over-year increase in revenue the company had recorded in the same quarter last year. Ahead of the earnings results the analysts covering the company were estimating sales to grow 22.1% over the next twelve months.

There are others doing even better than Etsy. Founded by ex-Google engineers, a small company making software for banks has been growing revenue 90% year on year and is already up more than 150% since the IPO last December. You can find it on our platform for free.

Over the last two years the number of Etsy's active buyers, a key usage metric for the company, grew 39.9% annually to 95.1 million users. This is among the fastest growth of any consumer internet company, indicating that users are excited about the offering. 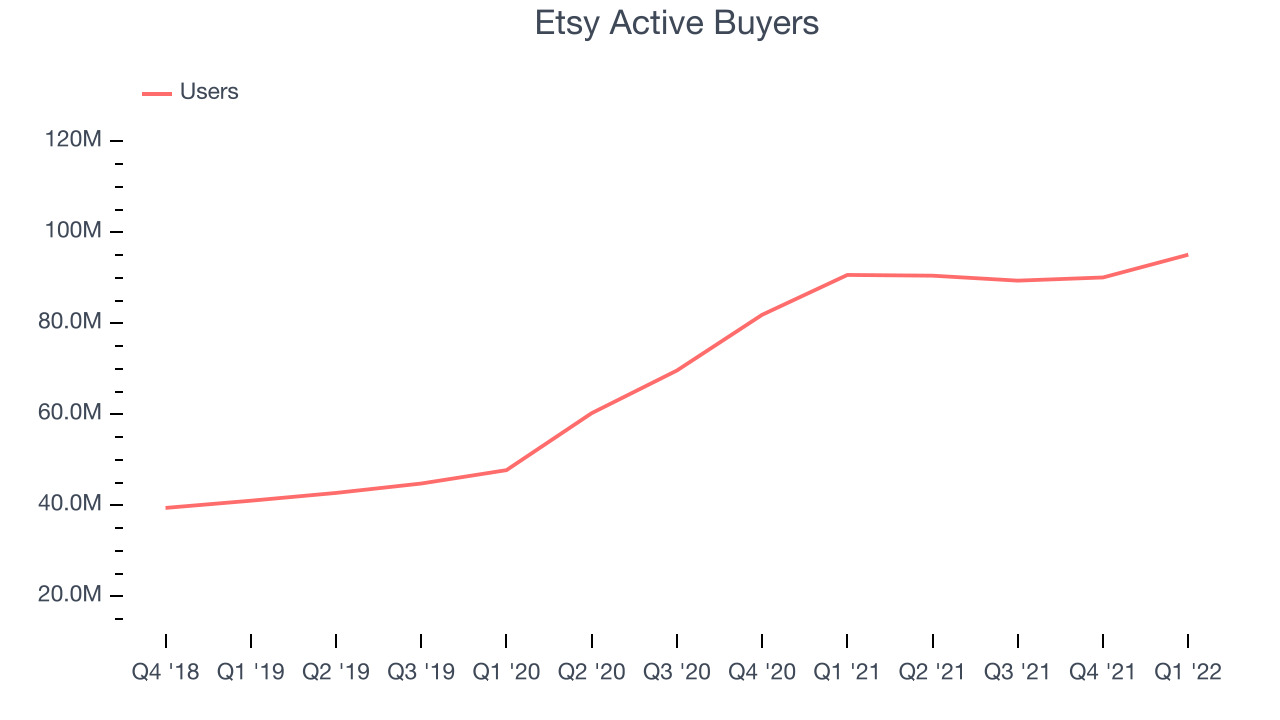 In Q1 the company added 4.44 million active buyers, translating to a 4.9% growth year on year.

Sporting a market capitalization of $12.7 billion, more than $982.2 million in cash and with positive free cash flow over the last twelve months, we're confident that Etsy has the resources it needs to pursue a high growth business strategy.

We struggled to find many strong positives in these results. On the other hand, it was unfortunate to see that the revenue guidance for the next quarter missed analysts' expectations and the revenue growth was quite weak. Overall, this quarter's results could have been better. The company is down 11.7% on the results and currently trades at $96.83 per share.

Etsy may have had a tough quarter, but does that actually create an opportunity to invest right now? It is important that you take into account its valuation and business qualities, as well as what happened in the latest quarter. We look at that in our actionable report which you can read here, it's free.