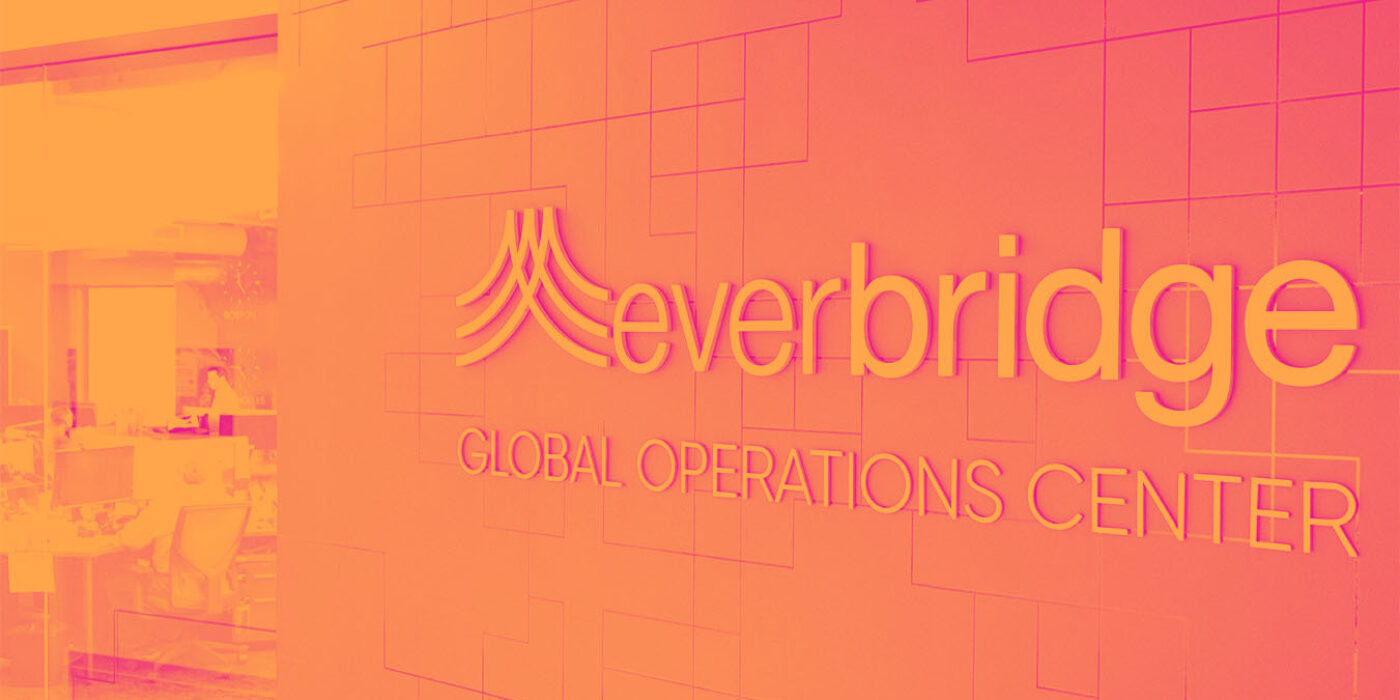 Critical event management software company Everbridge (NASDAQ:EVBG) reported Q1 FY2022 results beating Wall St's expectations, with revenue up 22% year on year to $100.3 million. The company expects that next quarter's revenue would be around $102 million, which is the midpoint of the guidance range. That was in roughly line with analyst expectations. Everbridge made a GAAP loss of $19 million, improving on its loss of $21.7 million, in the same quarter last year.

From school shootings to storm surges, Everbridge can help organisations automate the initiation of incident response, alert people to threats via their phones, and proactively assess risk levels before critical events emerge. Importantly, the Everbridge private network allows groups of customers to opt in to share data on a confidential basis with each other around specific problems or critical events. This means that Everbridge’s platform becomes more valuable as more organizations use it.

Everbridge gains competitive advantage as more customers anonymously share data with each other, so it’s important that it continues to win more customers. And the more Everbridge is deployed by varied customers, the more data and opportunities it has to help streamline responses, and derive insights about how critical events can be better managed in the future.

Everbridge has global market penetration but it faces competition from established firms like Juvare, which owns WebEOC, an extremely widely used emergency management software. And there are a plethora of smaller competitors in mass notification, though Everbridge’s cell broadcast and location-based SMS solutions cannot be replicated by all of them.

As you can see below, Everbridge's revenue growth has been very strong over the last year, growing from quarterly revenue of $82.2 million, to $100.3 million. 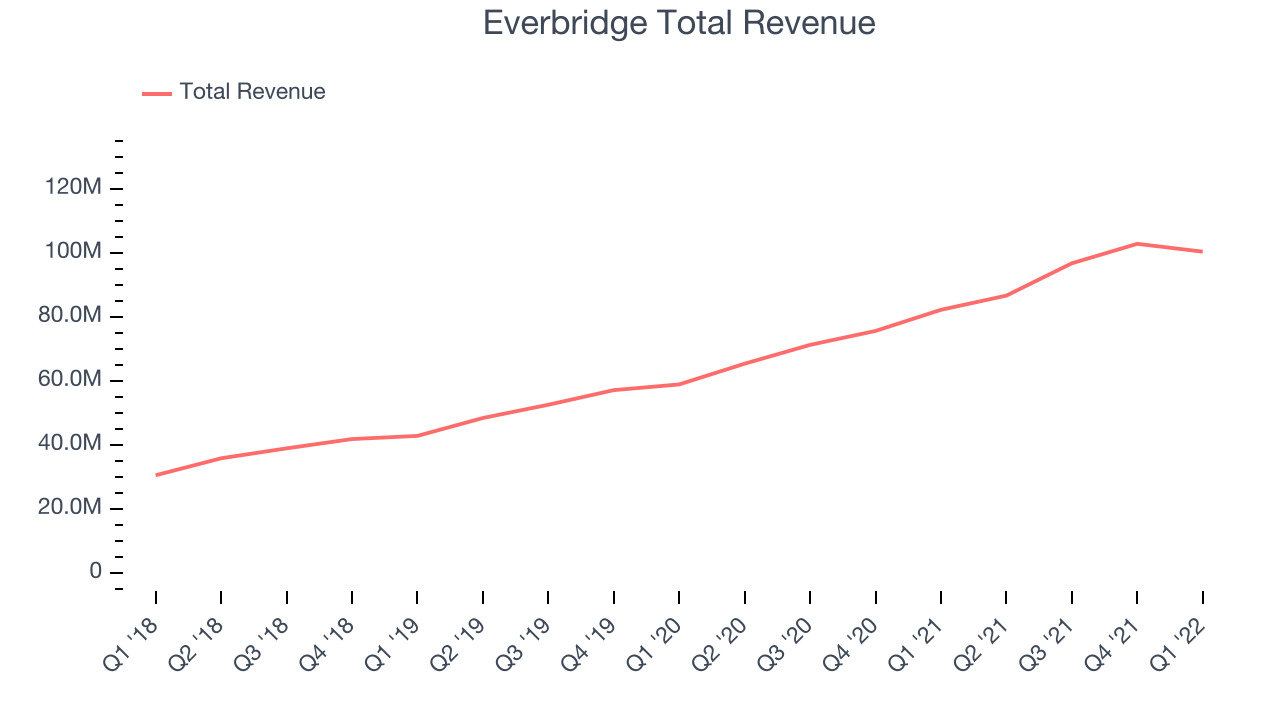 This quarter, Everbridge's quarterly revenue was once again up a very solid 22% year on year. But the revenue actually decreased by $2.45 million in Q1, compared to $6.08 million increase in Q4 2021. We'd like to see revenue increase each quarter, but a one-off fluctuation is usually not concerning and the management is guiding for growth to rebound in the next quarter.

Guidance for the next quarter indicates Everbridge is expecting revenue to grow 17.7% year on year to $102 million, slowing down from the 32.5% year-over-year increase in revenue the company had recorded in the same quarter last year. Ahead of the earnings results the analysts covering the company were estimating sales to grow 15.4% over the next twelve months.

You can see below that Everbridge reported 6,224 customers at the end of the quarter, an increase of 89 on last quarter. That is a little slower customer growth than what we are used to seeing lately, suggesting that the customer acquisition momentum is slowing a little bit. 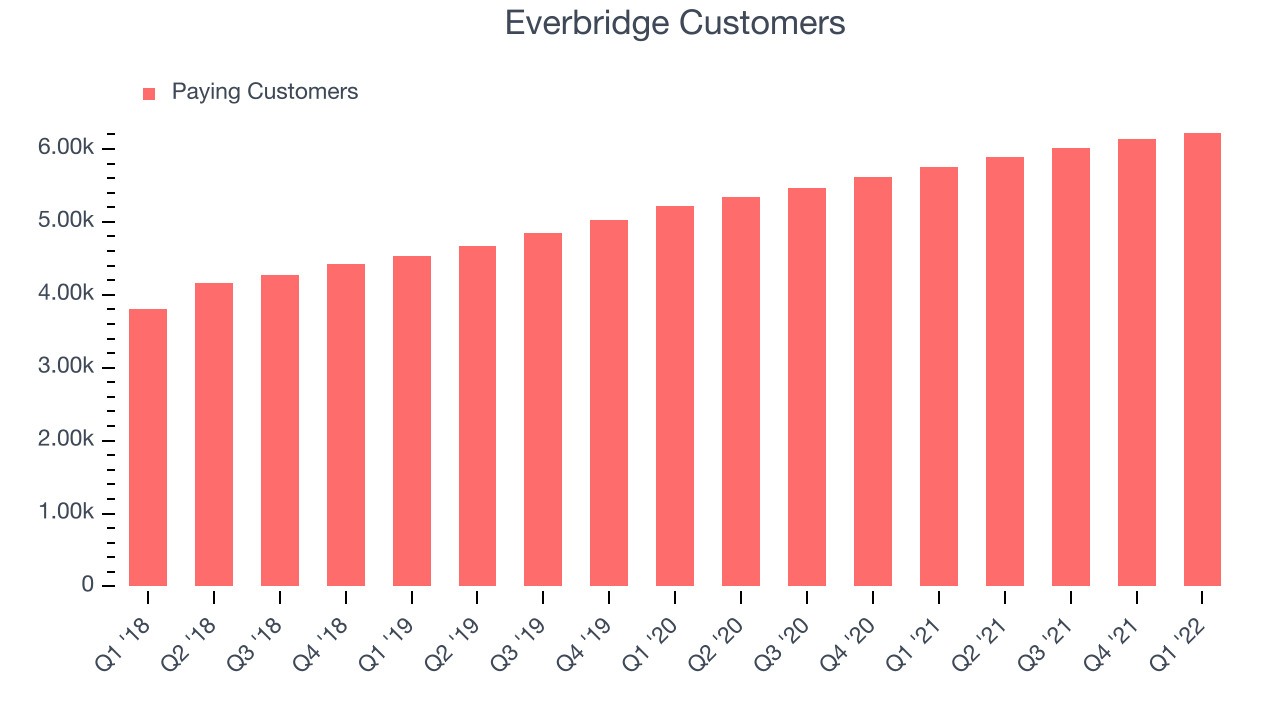 What makes the software as a service business so attractive is that once the software is developed, it typically shouldn't cost much to provide it as an ongoing service to customers. Everbridge's gross profit margin, an important metric measuring how much money there is left after paying for servers, licenses, technical support and other necessary running expenses was at 68.2% in Q1. 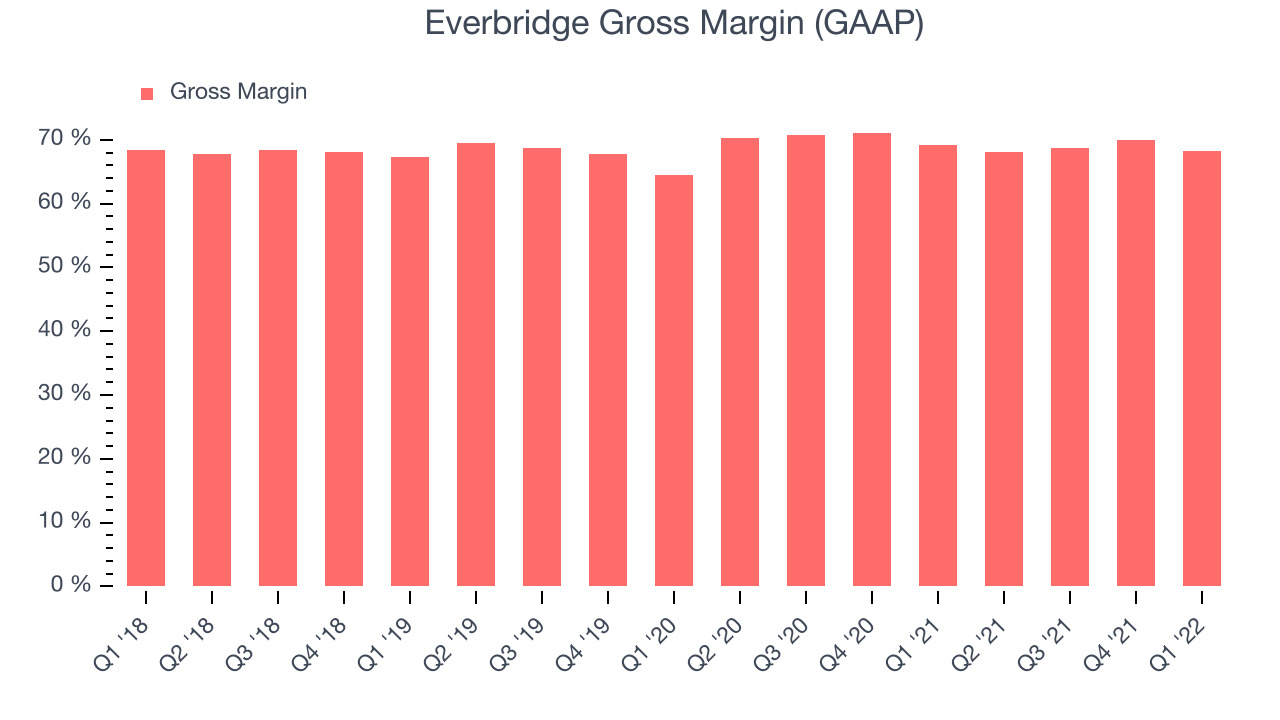 If you follow StockStory for a while, you know that we put an emphasis on cash flow. Why, you ask? We believe that in the end cash is king, as you can't use accounting profits to pay the bills. Everbridge's free cash flow came in at $1.52 million in Q1, down 90.1% year on year. 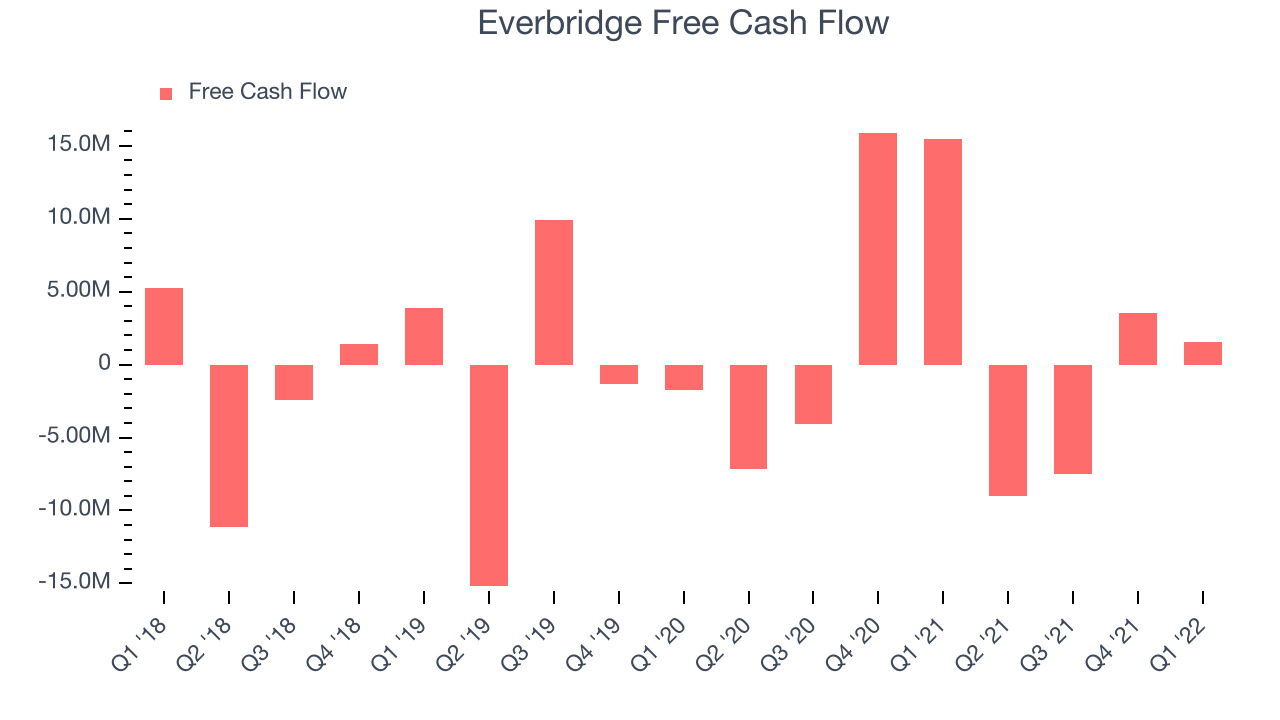 Everbridge has burned through $11.5 million in cash over the last twelve months, resulting in a negative 2.98% free cash flow margin. This below average FCF margin is a result of Everbridge's need to invest in the business to continue penetrating its market.

With a market capitalization of $1.57 billion Everbridge is among smaller companies, but its more than $492 million in cash and the fact it is operating close to free cash flow break-even put it in a robust financial position to invest in growth.

Everbridge topped analysts’ revenue expectations this quarter, even if just narrowly. That feature of these results really stood out as a positive. On the other hand, it was unfortunate to see the slowdown in customer growth and gross margin deteriorated a little. Overall, this quarter's results could have been better. The company is flat on the results and currently trades at $31.2 per share.

When considering Everbridge, investors should take into account its valuation and business qualities, as well as what happened in the latest quarter. Although Everbridge is not a bad business, it probably wouldn't be one of our picks. Its revenue growth has been strong, though we don't expect it to maintain historical growth rates. But while its very efficient customer acquisition hints at the potential for strong profitability, unfortunately its gross margins aren't as good as other tech businesses we look at.

Everbridge's price to sales ratio based on the next twelve months is 3.2x, suggesting that the market has lower expectations of the business, relative to the high growth tech stocks. We don't really see a big opportunity in the stock at the moment, but in the end beauty is in the eye of the beholder. And if you like the company, it seems that Everbridge doesn't trade at a completely unreasonable price point.