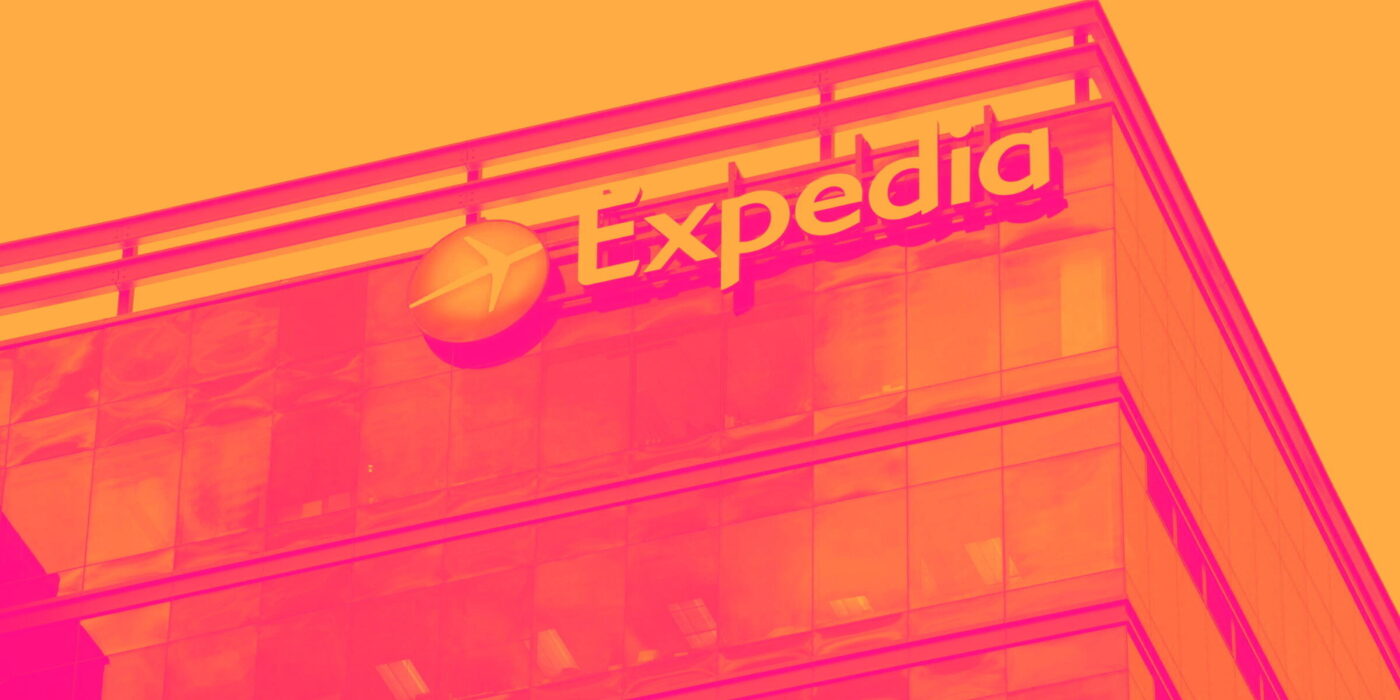 Online travel agency Expedia (NASDAQ: EXPE) fell short of analyst expectations in Q1 FY2022 quarter, with revenue up 80.4% year on year to $2.24 billion. Expedia made a GAAP loss of $123 million, improving on its loss of $581 million, in the same quarter last year.

For consumers, Expedia simplifies planning travel, by aggregating supply of hotels, flights, and experiences and using its scale and rewards programs to offer the best prices, while for suppliers, Expedia delivers one of the largest audiences of travel shoppers online.

Historically, Expedia has held its largest market share in North America, specifically in Hotels, while it has long sought to take market share from market leader Booking.com and Priceline in Europe. It acquired HomeAway in recent years and has begun building up an alternative accommodations business to compete with AirBnB.

Marketplaces have existed for centuries. Where once it was a main street in a small town or a mall in the suburbs, sellers benefitted from proximity to one another because they could draw customers by offering convenience and selection. Today, a myriad of online marketplaces fulfill that same role, aggregating large customer bases, which attracts commission paying sellers, generating flywheel scale effects which feed back into further customer acquisition. Because of the enormous number of flights, hotels, and accommodations available, travel is a natural fit for marketplaces that aggregate suppliers, simplifying the shopping process for consumers. Phocuswright estimated that the annual global travel market will reach $1.4 trillion of bookings in 2022 and online travel platforms today make up over 50% of the industry’s bookings, a percentage that has been rising for 20 years, and will likely continue in the years ahead. Covid lockdowns in 2020 halted global travel for months on end, and may have fundamentally reduced the market for business travel, a long term threat for the profitability of online travel platforms.

Expedia's revenue growth over the last three years has been strong, averaging 29.8% annually. Expedia's revenue took a hit when the pandemic first hit, but it has since rebounded strongly, as you can see below. 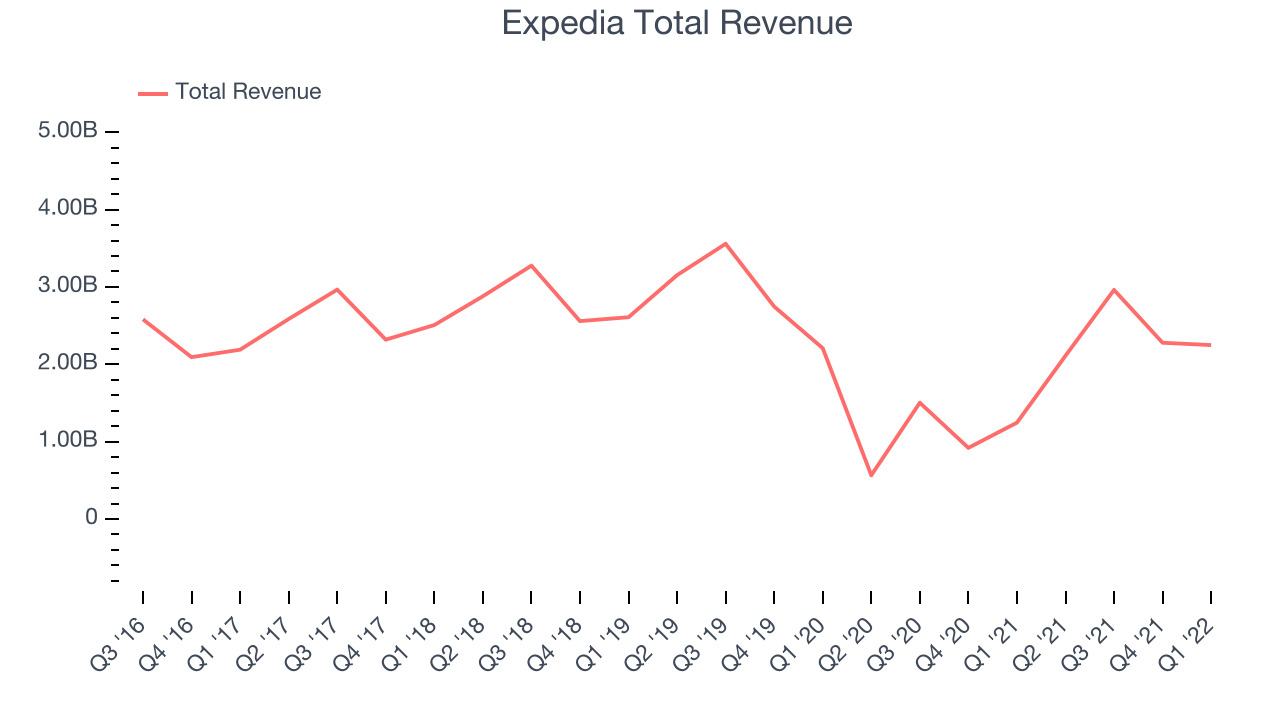 This quarter, Expedia reported a very impressive 80.4% year on year revenue growth, but this result fell short of what analysts were expecting.

Ahead of the earnings results the analysts covering the company were estimating sales to grow 29.7% over the next twelve months.

As an online travel company, Expedia generates revenue growth by a combination of increasing the number of stays (or experiences) booked, as well as the level of commission charged on those bookings.

Over the last two years the number of Expedia's nights booked, a key usage metric for the company, grew 66.8% annually to 56.5 million users. This is among the fastest growth of any consumer internet company, indicating that users are excited about the offering. 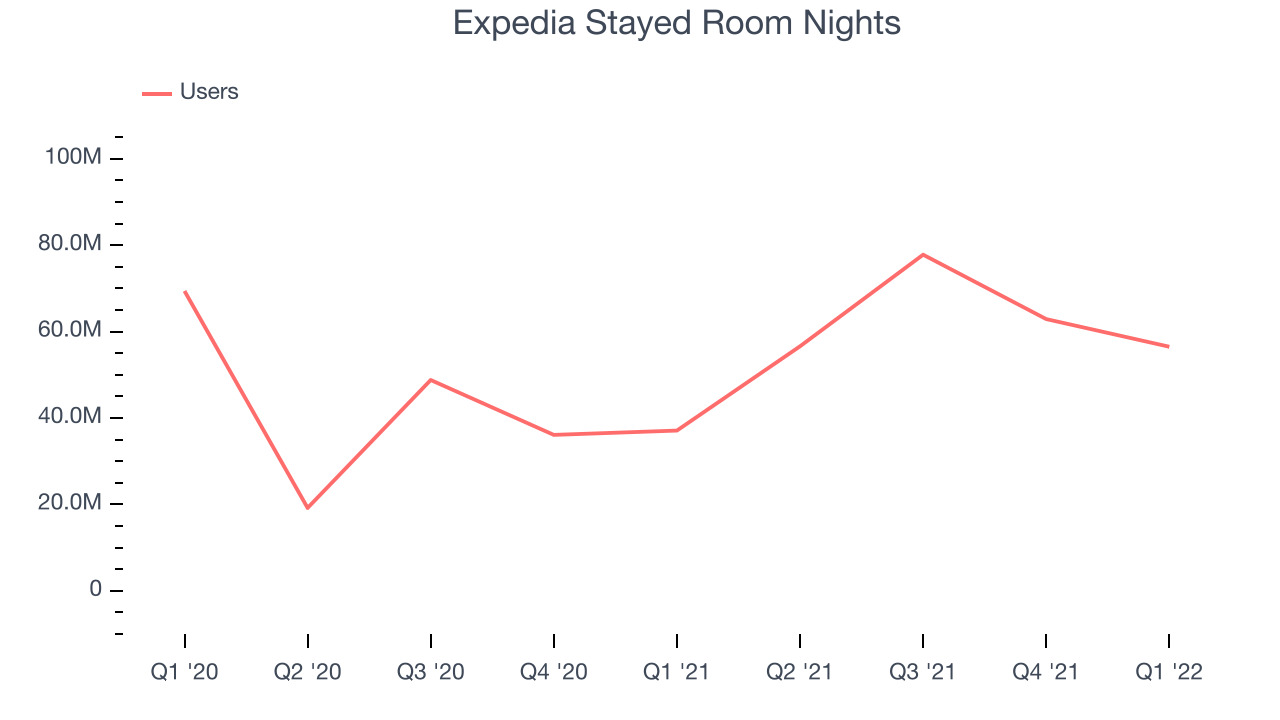 In Q1 the company added 19.4 million nights booked, translating to a 52.2% growth year on year.

Average revenue per user (ARPU) is a critical metric to track for every consumer internet product and for Expedia it measures revenue per each of the nights booked, a function of the cost of the service and the commission Expedia's charges. 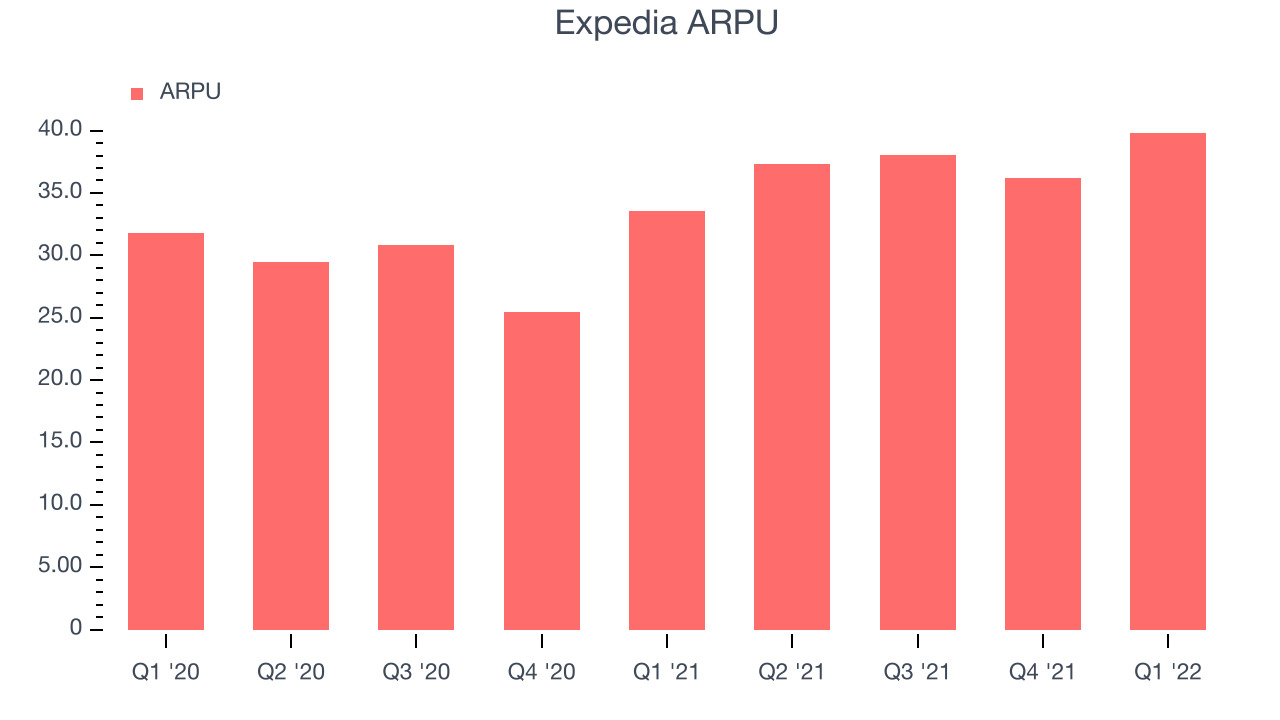 Expedia’s ARPU growth has been strong over the last two years, averaging 23.2%. The ability to increase price while still growing its user base reflects the strength of Expedia’s platform, as its users continue to spend more than last year. This quarter, ARPU grew 18.5% year on year, reaching $39.80 for each of the nights booked.

Unlike enterprise software that is typically sold by sales teams, consumer internet businesses like Expedia grow by a combination of product virality, paid advertisement or incentives.

It is very expensive for Expedia to acquire new users, with the company spending 61.9% of its gross profit on marketing over the last year. This low level of sales and marketing efficiency indicates a highly competitive environment, with little differentiation between Expedia and its peers.

Expedia's EBITDA was $173 million this quarter, which translates to a 7.69% margin. Over the last twelve months, the company has exhibited strong profitability with average EBITDA margins of 16.7%. 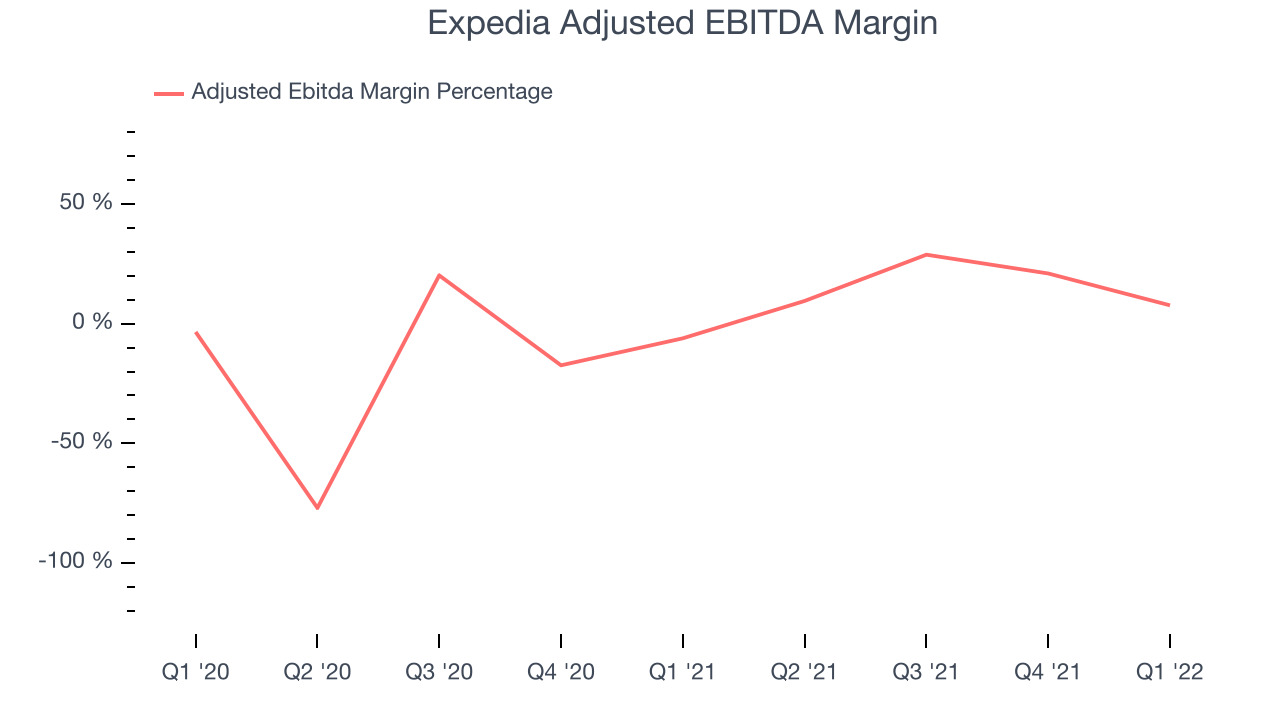 If you follow StockStory for a while, you know that we put an emphasis on cash flow. Why, you ask? We believe that in the end cash is king, as you can't use accounting profits to pay the bills. Expedia's free cash flow came in at $2.83 billion in Q1, up 41.6% year on year. 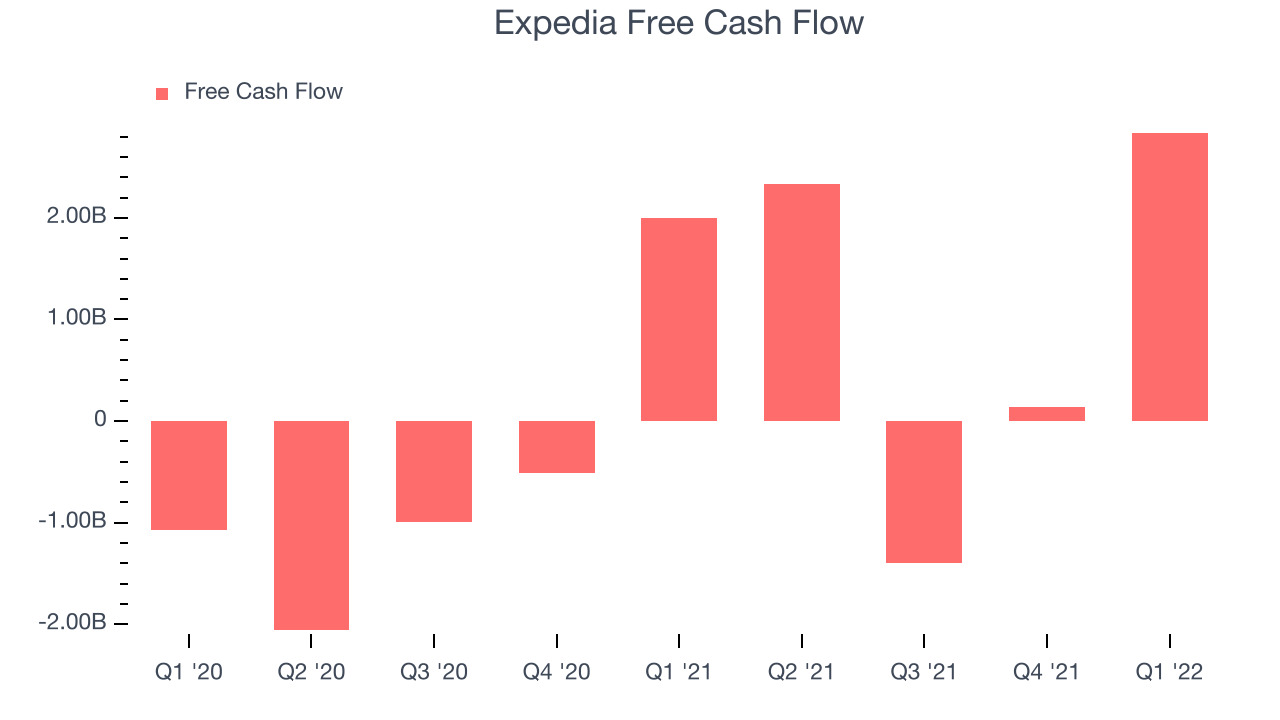 Expedia has generated $3.9 billion in free cash flow over the last twelve months, an impressive 40.7% of revenues. This robust FCF margin is a result of Expedia asset lite business model and scale advantages and provides it the option to return capital to shareholders while still having plenty of cash to invest in the business.

With a market capitalization of $28.4 billion, more than $5.55 billion in cash and with free cash flow over the last twelve months being positive, the company is in a very strong position to invest in growth.

We were impressed by the exceptional revenue growth Expedia delivered this quarter. And we were also glad to see the user growth. Zooming out, we think this was a great quarter and shareholders will likely feel excited about the results. The company is up 4.68% on the results and currently trades at $183 per share.

Expedia may have had a good quarter, but investors should also consider its valuation and business qualities, when assessing the investment opportunity. We think Expedia is a good business. We would expect growth rates to moderate from here, but its revenue growth has been good, over the last three years. And while its sales and marketing spend is very high compared to other consumer internet businesses, the good news is its powerful free cash generation enables it to sustainably invest in growth initiatives while maintaining an ample cash cushion, and its user growth has been strong.

The market is certainly expecting long term growth from Expedia given its EV/EBITDA ratio based on the next twelve months of 10.2x is higher than many other consumer internet companies. There are definitely things to like about Expedia and there's no doubt it is a bit of a market darling, at least for some. But when considering the company against the backdrop of the consumer internet stock landscape, it seems that there is a lot of optimism already priced in and we are wondering whether there might be better opportunities elsewhere right now.