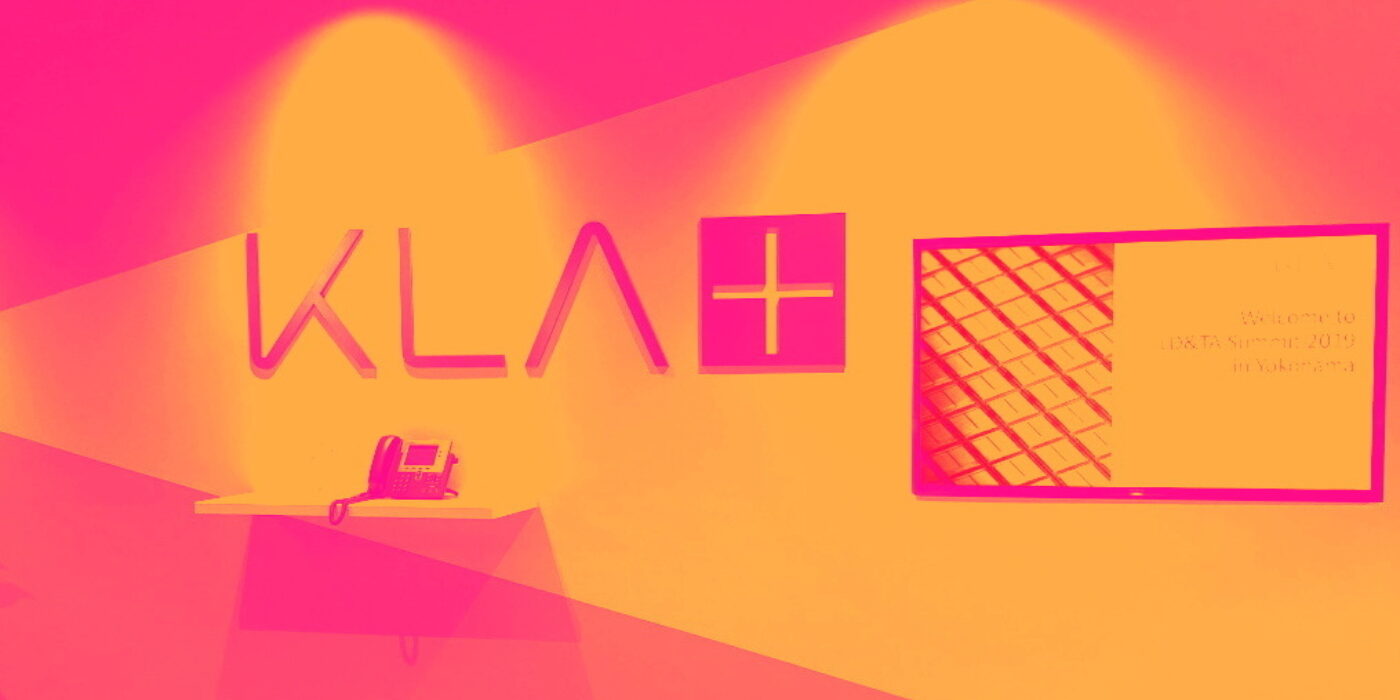 Maker of equipment for semiconductor manufacturing, KLA Corporation (NASDAQ:KLAC) reported Q2 FY2023 results beating Wall St's expectations, with revenue up 26.8% year on year to $2.98 billion. However, guidance for the next quarter was less impressive, coming in at $2.35 billion at the midpoint, being 5.95% below analyst estimates. KLA Corporation made a GAAP profit of $978.7 million, improving on its profit of $717.5 million, in the same quarter last year.

KLA is the dominant provider of process control systems, maintaining around 50% market share for more than a decade, or 4x its closest competitor. It works closely with its customers to develop specific tools for specific semiconductor manufacturing processes. In recent years it has looked to expand its addressable market and the 2019 acquisition of Orbotech extended its business into printed circuit boards and flat panel displays.

KLA Corporation's revenue growth over the last three years has been strong, averaging 26.1% annually. And as you can see below, last year has been especially strong, with quarterly revenue growing from $2.35 billion to $2.98 billion. Semiconductors are a cyclical industry and long-term investors should be prepared for periods of high growth, followed by periods of revenue contractions (which can sometimes offer opportune times to buy). 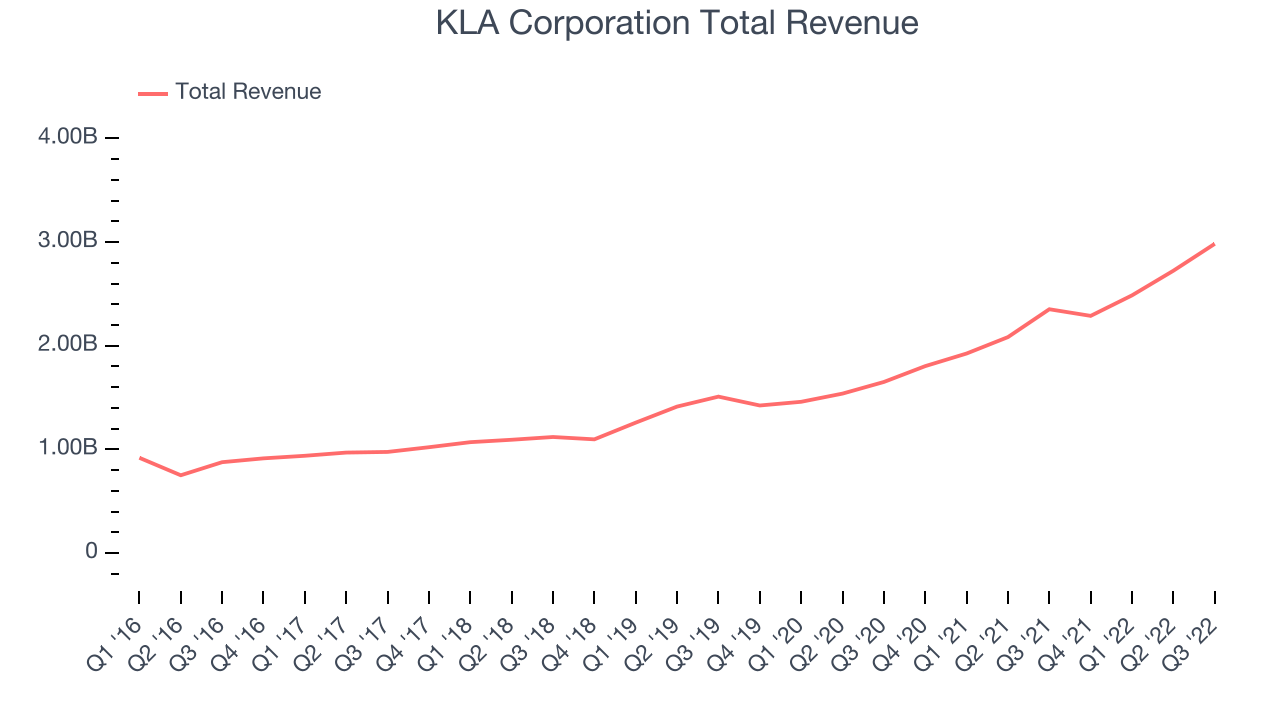 This was a decent quarter for KLA Corporation as revenues grew 26.8%, topping analyst estimates by 5.5%.

KLA Corporation' appears to be headed for a downturn. While the company is guiding to growth of 2.67% YoY next quarter, analyst consensus sees 13.3% declines over the next twelve months. 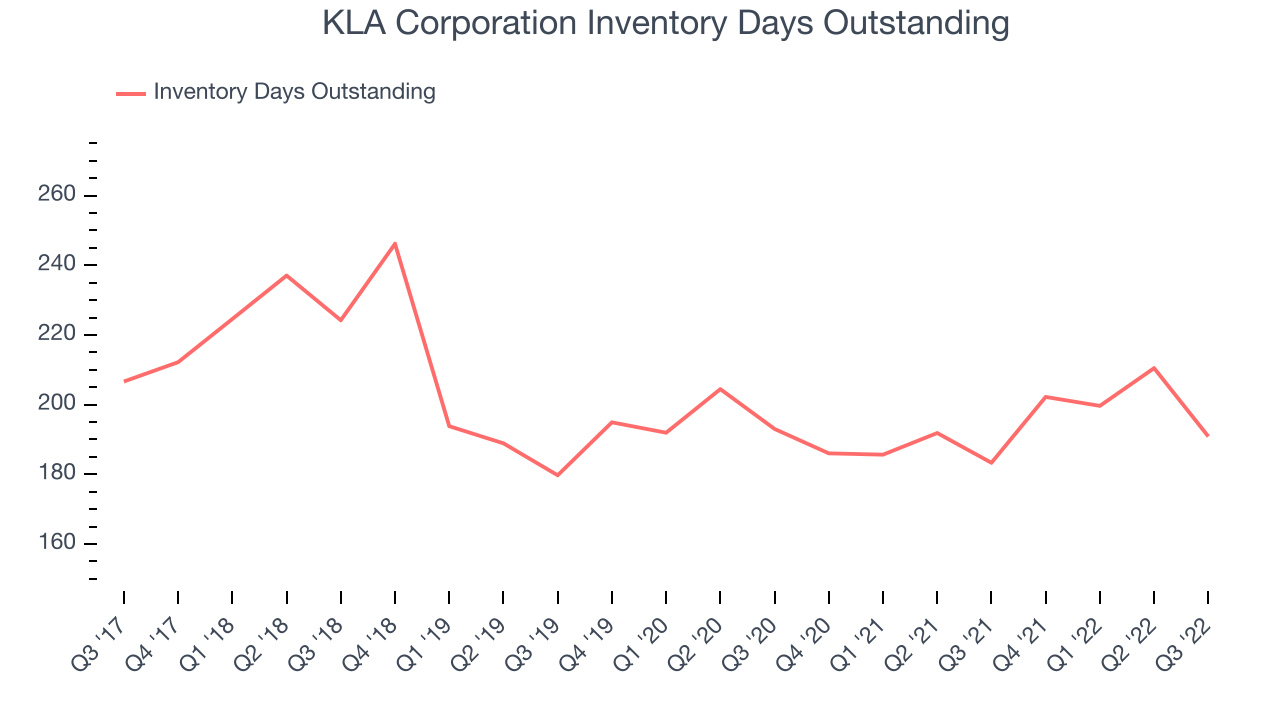 This quarter, KLA Corporation’s inventory days came in at 191, 11 days below the five year average, showing no indication of an excessive inventory buildup at the moment.

KLA Corporation's gross profit margin, how much the company gets to keep after paying the costs of manufacturing its products, came in at 59.4% in Q2, down 1.9 percentage points year on year. 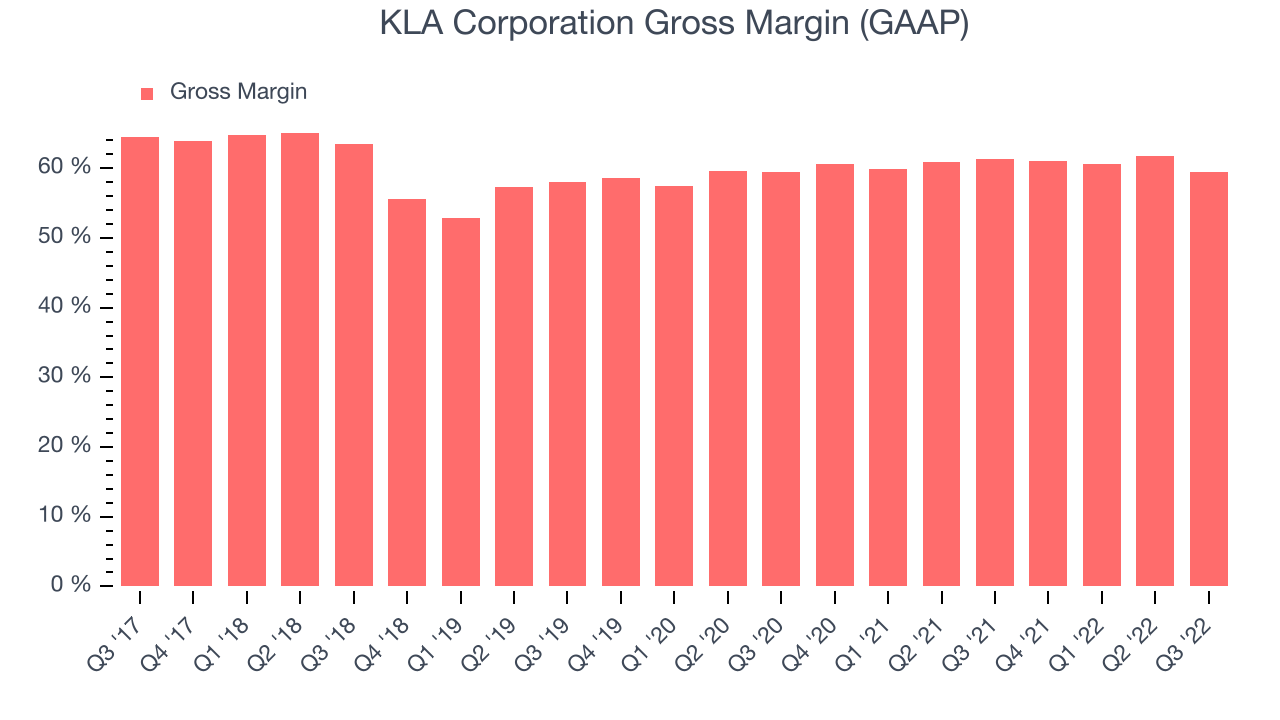 KLA Corporation's gross margins have been stable over the past year, averaging 60.7%, and remains well ahead of most of its semiconductor peers, indicative of a potent competitive offering, pricing power, and solid inventory management.

KLA Corporation reported an operating margin of 44.9% in Q2, up 1.3 percentage points year on year. Operating margins are one of the best measures of profitability, telling us how much the company gets to keep after paying the costs of manufacturing the product, selling and marketing it and most importantly, keeping products relevant through research and development spending. 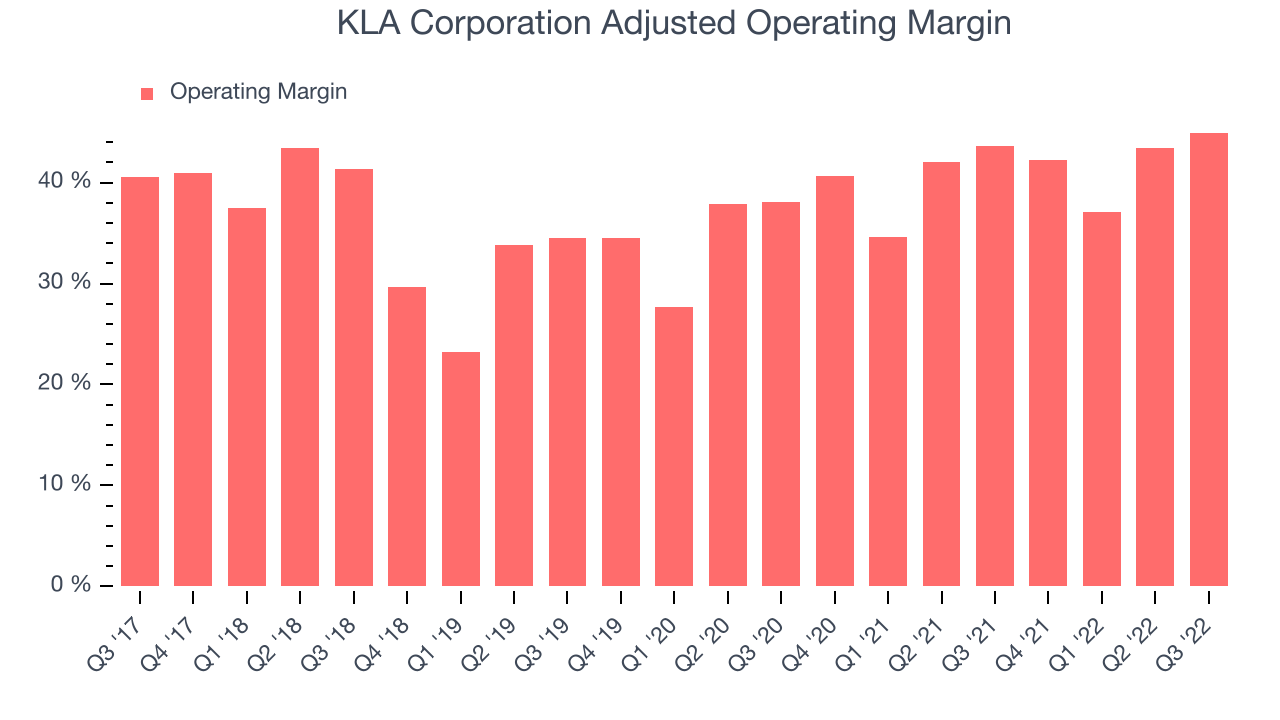 Operating margins have been trending up over the last year, averaging 41.9%. KLA Corporation's margins remain one of the highest in the semiconductor industry, driven by its highly efficient operating model's economies of scale.

Wall St analysts are expecting earnings per share to decline 24.2% over the next twelve months, although estimates are likely to change post earnings.

Earnings are important, but we believe cash is king as you cannot pay bills with accounting profits. KLA Corporation's free cash flow came in at $594.6 million in Q2, down 20.2% year on year. 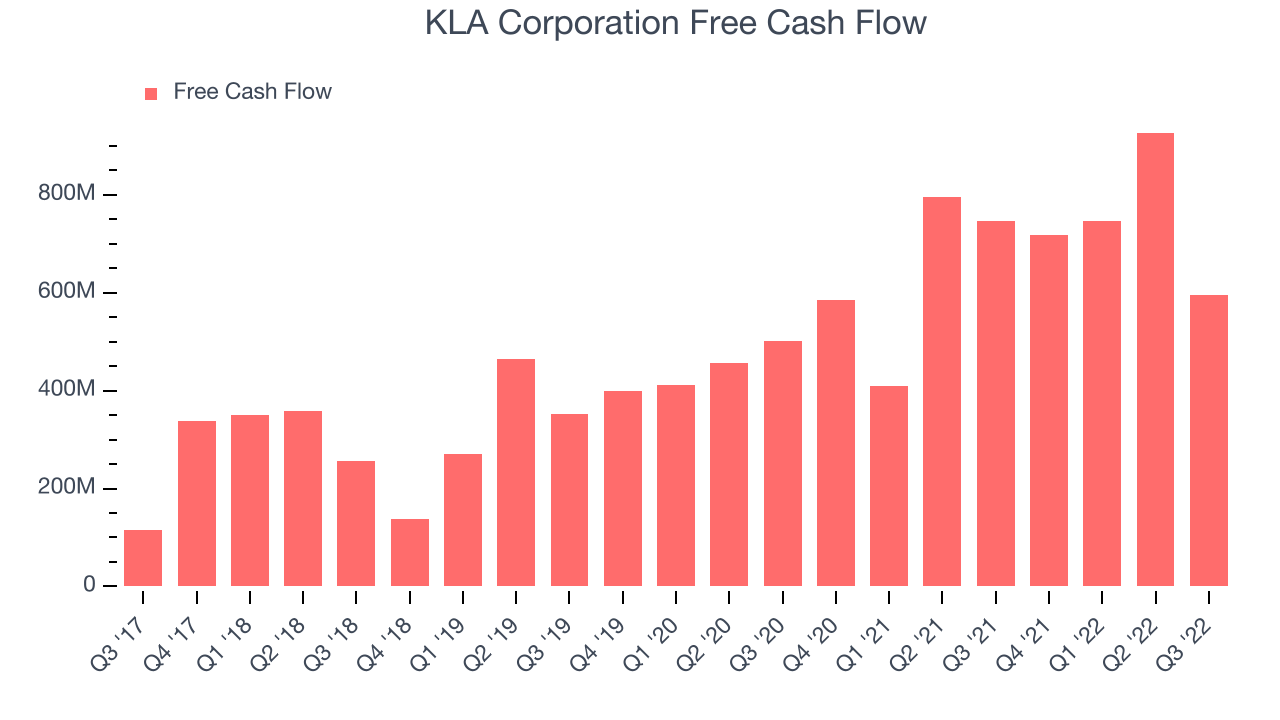 KLA Corporation has generated $2.98 billion in free cash flow over the last twelve months, translating to 28.4% of revenues. This is a great result; KLA Corporation's free cash flow conversion was very high compared to most semiconductor companies, in the last year. This high cash conversion, if maintained, puts it in a great position to invest in new products, while also remaining resilient during industry down cycles.

KLA Corporation’s average return on invested capital (ROIC) over the last 5 years of 78.5% implies it has a strong competitive position and is able to invest in profitable growth over the long term.

Sporting a market capitalization of $59.8 billion, more than $2.86 billion in cash and with positive free cash flow over the last twelve months, we're confident that KLA Corporation has the resources it needs to pursue a high growth business strategy.

We were very impressed by the strong improvements in KLA Corporation’s inventory levels. And we were also excited to see that it outperformed Wall St’s revenue expectations. On the other hand, it was unfortunate to see that the revenue guidance for the next quarter missed analysts' expectations and gross margin deteriorated a little. Overall, this quarter's results still seemed mixed. Investors might have been expecting more and the company is down 3.43% on the results and currently trades at $414 per share.

When considering KLA Corporation, investors should take into account its valuation and business qualities, as well as what happened in the latest quarter. We think KLA Corporation is a solid business. We would expect growth rates to moderate from here, but its revenue growth has been solid, over the last three years. On top of that, its impressive operating margins are indicative of an highly efficient business model, and its high return on invested capital suggests it is well run and in a strong position for profit growth.

KLA Corporation's price to earnings ratio based on the next twelve months is 23.4x. There are definitely things to like about KLA Corporation and looking at the semiconductors landscape right now, it seems that it doesn't trade at an unreasonable price point.