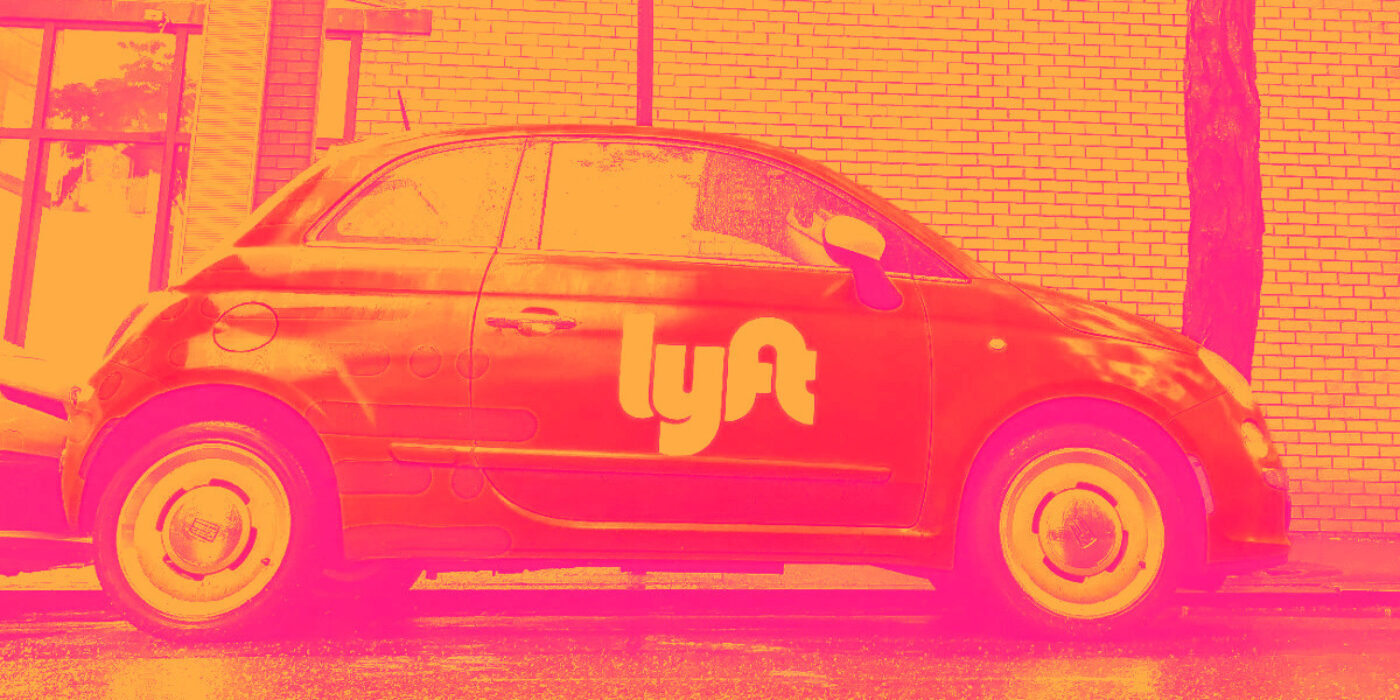 Uber created the first ride hailing app, allowing users to summon black limousines via their mobile devices, an innovation that disrupted modern transportation. Lyft followed and expanded the service to the mass market, positioning it as a casual, friendly carpool experience that aimed to appeal to younger generations. Initially, Lyft’s drivers had a pink mustache affixed to the grill of their car, which has since been replaced by an “Amp” device, which lights up the car’s dashboard to help riders easily find their car.

The company’s value propositions are multiple. For individuals, Lyft effectively lowered the cost per mile for taxi transportation vs. legacy cabs, while providing ease of use and convenience. For drivers, it has provided flexible earning opportunities.

Lyft's revenue growth over the last three years has been strong, averaging 27.8% annually. Lyft's revenue took a hit when the pandemic first hit, but it has since rebounded strongly, as you can see below. 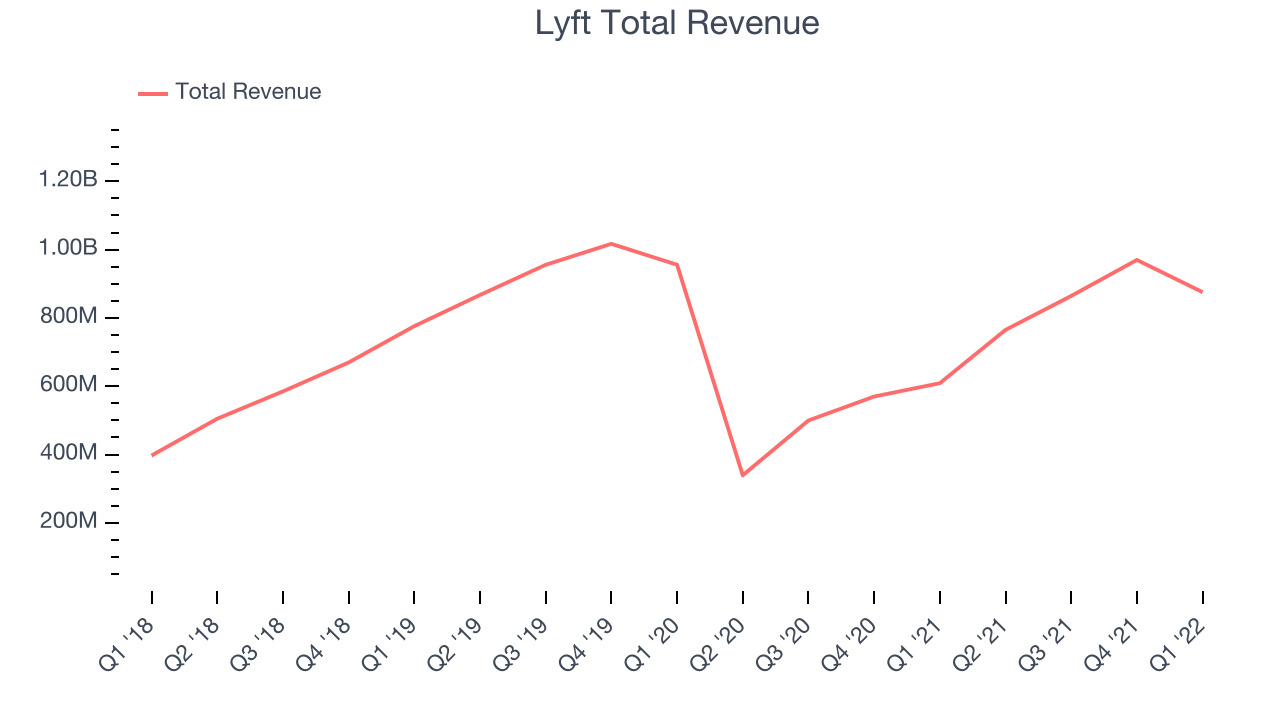 Ahead of the earnings results the analysts covering the company were estimating sales to grow 31.5% over the next twelve months.

As a gig economy marketplace, Lyft generates revenue growth by a combination of the volume of services users order and how much commission it earns.

Over the last two years the number of Lyft's paying users, a key usage metric for the company, grew 5.52% annually to 17.8 million users. This is an ok growth for a consumer internet company. 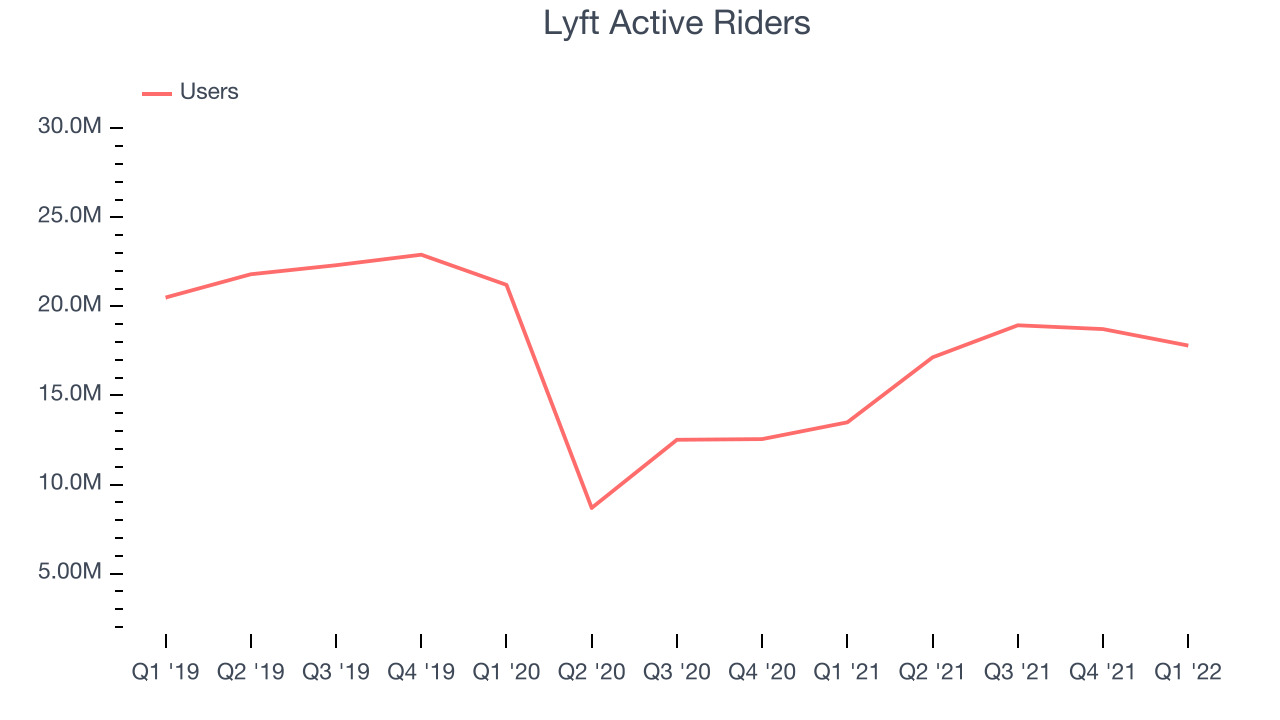 In Q1 the company added 4.31 million paying users, translating to a 31.9% growth year on year.

Average revenue per user (ARPU) is a critical metric to track for every consumer internet product and for Lyft it measures how much it earns off each transaction on its platform, a measure of the pricing leverage Lyft has with both its users and providers of services. 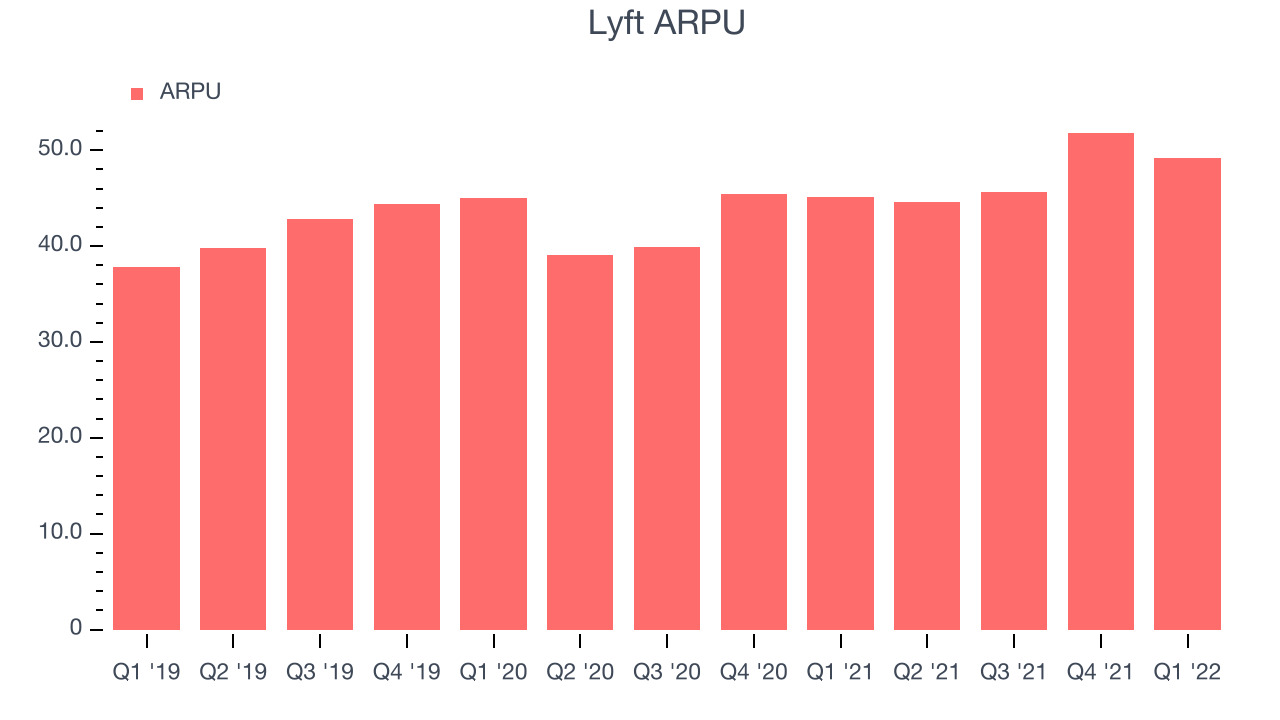 The ability to increase price while maintaining its user base shows increasing value of Lyft’s platform. This quarter, ARPU grew 8.97% year on year, reaching $49.17 for each of the paying users.

Unlike enterprise software that is typically sold by sales teams, consumer internet businesses like Lyft grow by a combination of product virality, paid advertisement or incentives.

Lyft is efficient at acquiring new users, spending 30.7% of its gross profit on marketing over the last year. This level of sales and marketing spend efficiency is indicative of a relatively solid competitive positioning, which gives Lyft the freedom to invest its resources into new growth initiatives.

Lyft reported EBITDA of $54.8 million this quarter, which was a 6.25% margin. Over the last twelve months Lyft has shown a solid, above-average profitability for a consumer internet business with average EBITDA margins of 6.21%. 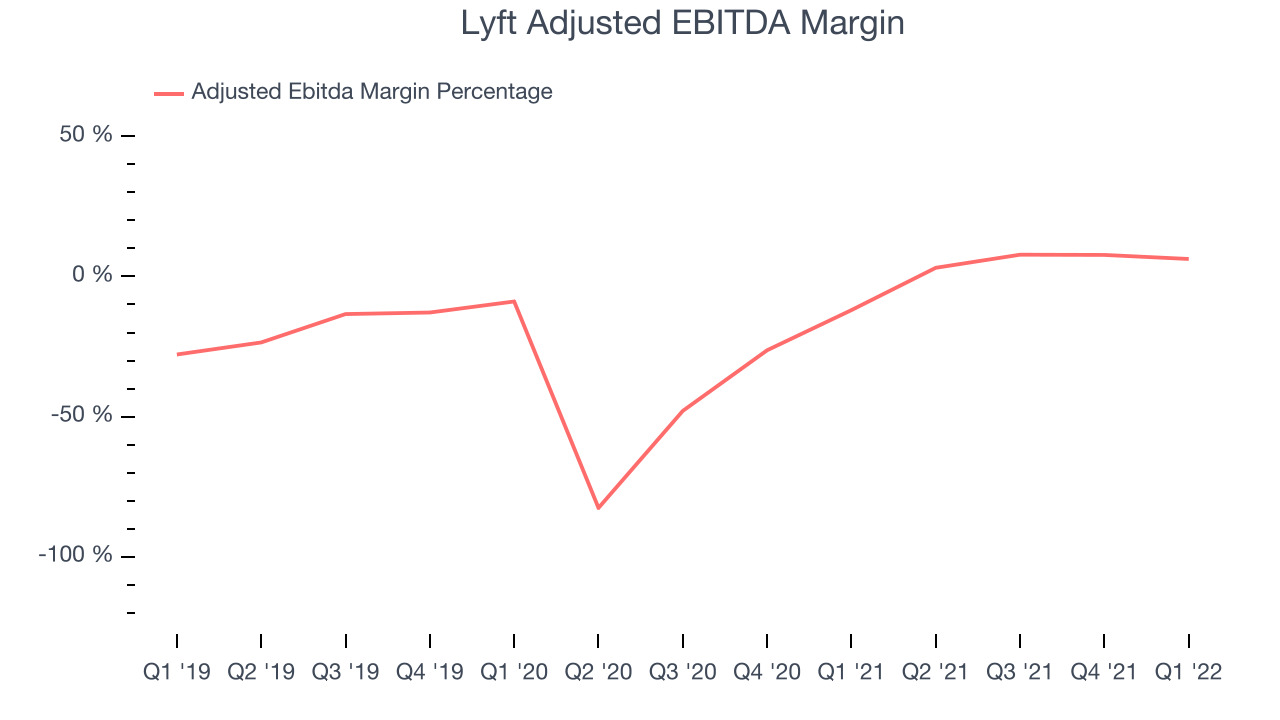 If you follow StockStory for a while, you know that we put an emphasis on cash flow. Why, you ask? We believe that in the end cash is king, as you can't use accounting profits to pay the bills. Lyft burned through $182.6 million in Q1, increasing the cash burn by 102% year on year. 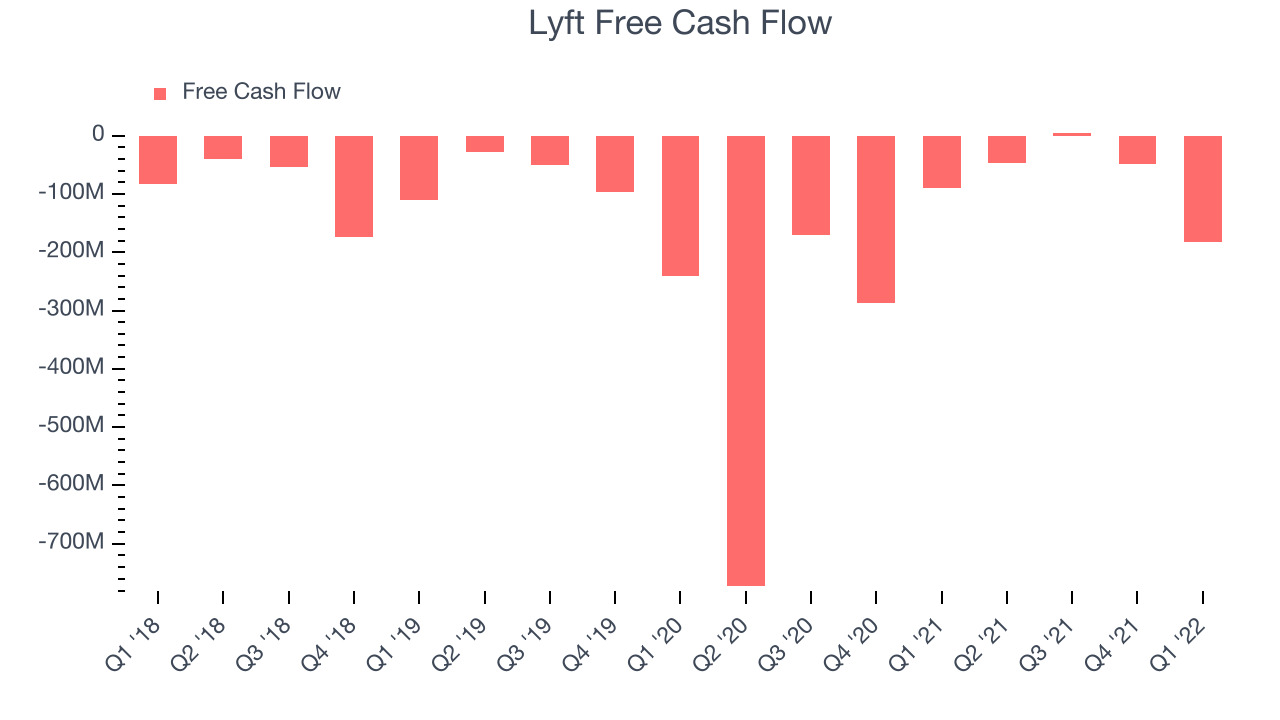 Lyft has burned through $273.4 million in cash over the last twelve months, resulting in a mediocre -7.87% free cash flow margin. This below average FCF margin is a result of Lyft's need to heavily invest in the business to continue to penetrate its market.

Since it has still been burning cash over the last twelve months it is worth keeping an eye on Lyft’s balance sheet, but we note that with a market capitalization of $10.9 billion and more than $2.23 billion in cash, the company has the capacity to continue to prioritise growth over profitability.

We were impressed by the exceptional revenue growth Lyft delivered this quarter. And we were also glad to see the user growth. Zooming out, we think this was a decent quarter should have shareholders feeling positive. The company currently trades at $16.6 per share.

Lyft may have had a good quarter, but investors should also consider its valuation and business qualities, when assessing the investment opportunity. Although Lyft is not a bad business, it probably wouldn't be one of our picks. Its revenue growth has been good, though we don't expect it to maintain historical growth rates. But while its user acquisition is efficient, the downside is that its ARPU is growing slowly and its operations are coming at a cost of a not an insignificant cash burn.

The market is certainly expecting long term growth from Lyft given its EV/EBITDA ratio based on the next twelve months of 21.6x is higher than many other consumer internet companies. We can find things to like about Lyft and there's no doubt it is a bit of a market darling, at least for some. But it seems that there is a lot of optimism already priced in and we are wondering whether there might be better opportunities elsewhere right now.