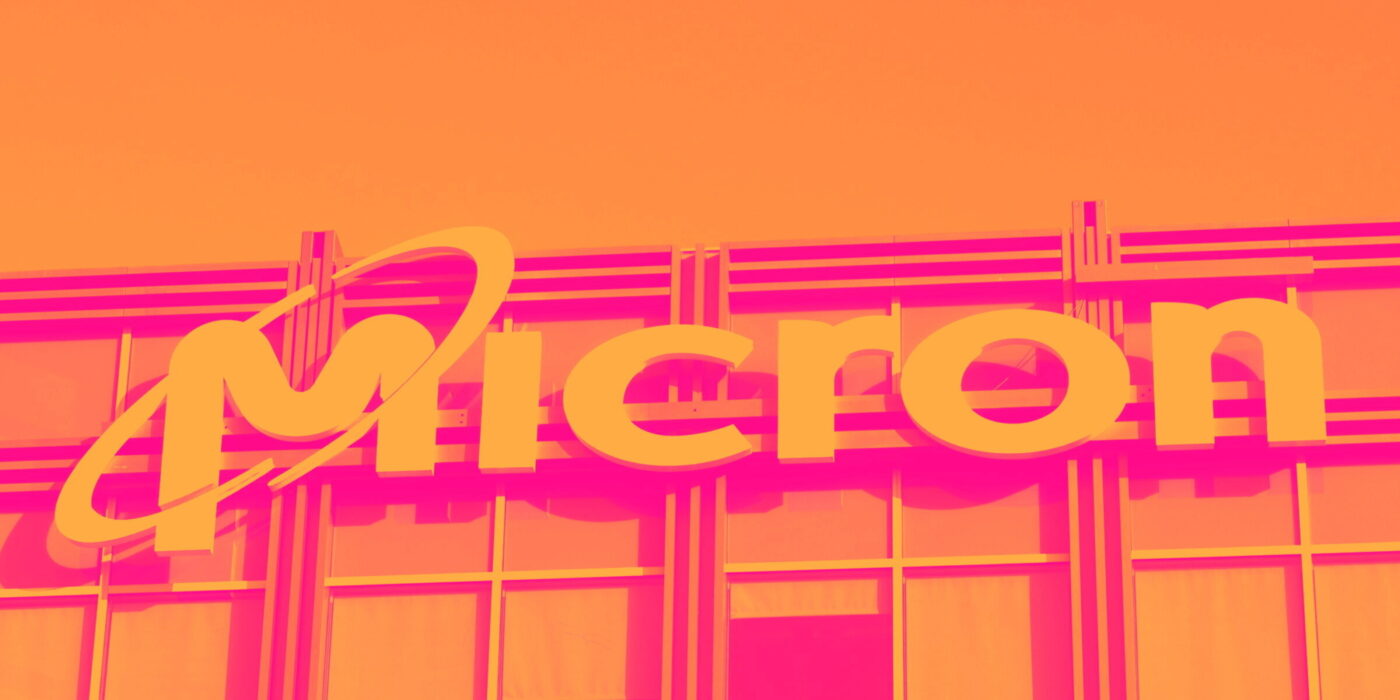 Memory chips maker Micron (NYSE:MU) fell short of analyst expectations in Q1 FY2023 quarter, with revenue down 46.8% year on year to $4.08 billion. Micron Technology made a GAAP loss of $195 million, down on its profit of $2.3 billion, in the same quarter last year.

Founded in the basement of a Boise, Idaho dental office in 1978, Micron (NYSE:MU) is a leading provider of memory chips used in thousands of devices across mobile, data centers, industrial, consumer, and automotive markets.

Micron is one of the leading producers of both DRAM and NAND memory chips globally, though DRAM has consistently accounted for the majority of Micron’s revenues. Micron’s DRAM is mostly used in PCs, servers, networking gear, along with industrial and automotive verticals. NAND is used in the same end markets, along with a heavy weighting in consumer devices like smartphones and tablets. Memory has the most volatile pricing dynamics in the semiconductors industry, which can result in Micron’s earnings results fluctuating wildly. As a result Micron’s valuation will often appear abnormally low compared to other semiconductors during the peak of the memory cycle, with the stock often trading for low to mid single digit forward earnings multiples (4x-8x) before dramatically expanding to high teens to mid twenties (18x-24x) when the cycle turns down.

Micron Technology's revenue growth over the last three years has been unremarkable, averaging 11.9% annually. Last year the quarterly revenue declined from $7.68 billion to $4.08 billion. Semiconductors are a cyclical industry and long-term investors should be prepared for periods of high growth, followed by periods of revenue contractions (which can sometimes offer opportune times to buy). 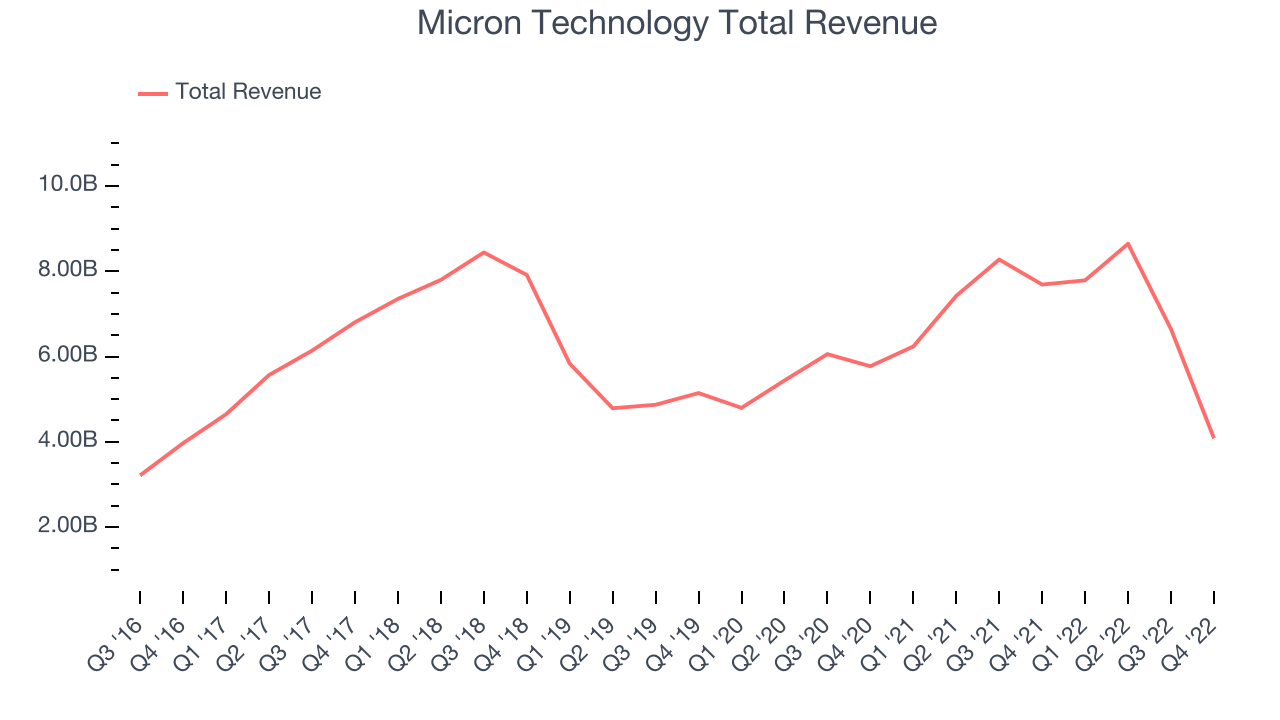 This was a difficult quarter for Micron Technology, with revenue declining 46.8%, missing analyst estimates by 2.22%.

Micron Technology's revenue growth has decelerated for the last three quarters and the company expects growth to turn negative next quarter guiding to a 51.1% year on year decline, while analysts are estimating a NTM revenue decline of 16.6%. 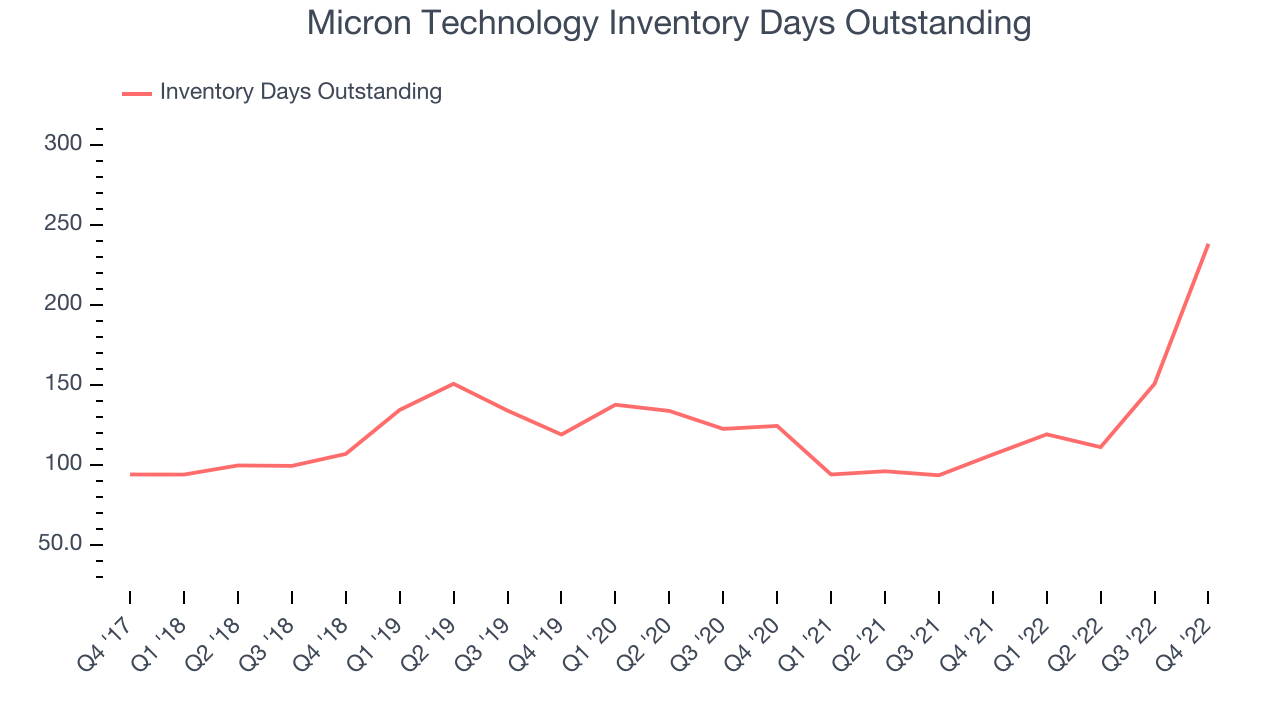 This quarter, Micron Technology’s inventory days came in at 238, 115 days above the five year average, suggesting that that inventory has grown to higher levels than what we used to see in the past.

Micron Technology's gross profit margin, how much the company gets to keep after paying the costs of manufacturing its products, came in at 21.8% in Q1, down 24.5 percentage points year on year. 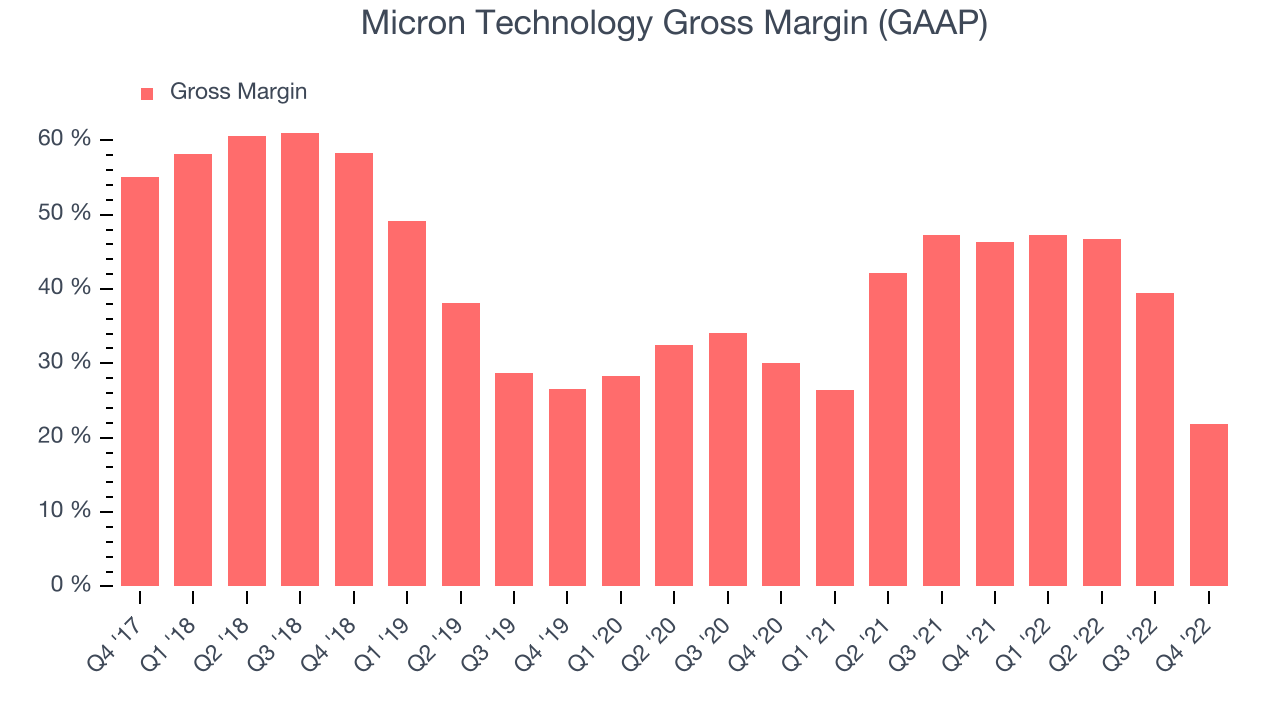 Micron Technology' gross margins have been trending up over the past year, averaging 38.8%. This is a welcome development, as Micron Technology's margins are slightly below the group average, potentially pointing to improved demand and pricing.

Micron Technology reported an operating margin of -1.6% in Q1, down 37 percentage points year on year. Operating margins are one of the best measures of profitability, telling us how much the company gets to keep after paying the costs of manufacturing the product, selling and marketing it and most importantly, keeping products relevant through research and development spending. 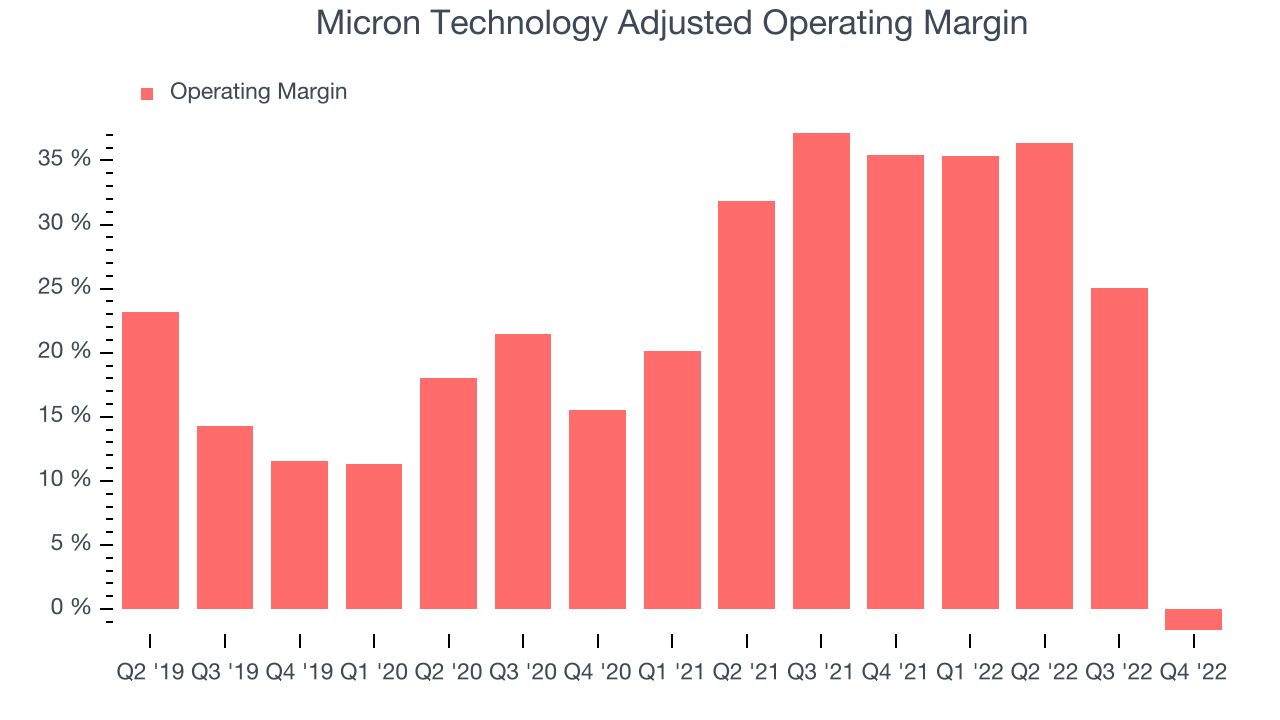 Operating margins have been trending down over the last year, averaging 23.7%. However, Micron Technology's margins remain one of the strongest in the industry, driven by its solid gross margins and economies of scale generated from its highly efficient operating model.

Wall St analysts are expecting earnings per share to decline 418% over the next twelve months, although estimates are likely to change post earnings.

Earnings are important, but we believe cash is king as you cannot pay bills with accounting profits. Micron Technology's free cash flow came in at -$1.53 billion in Q1, down 327% year on year. 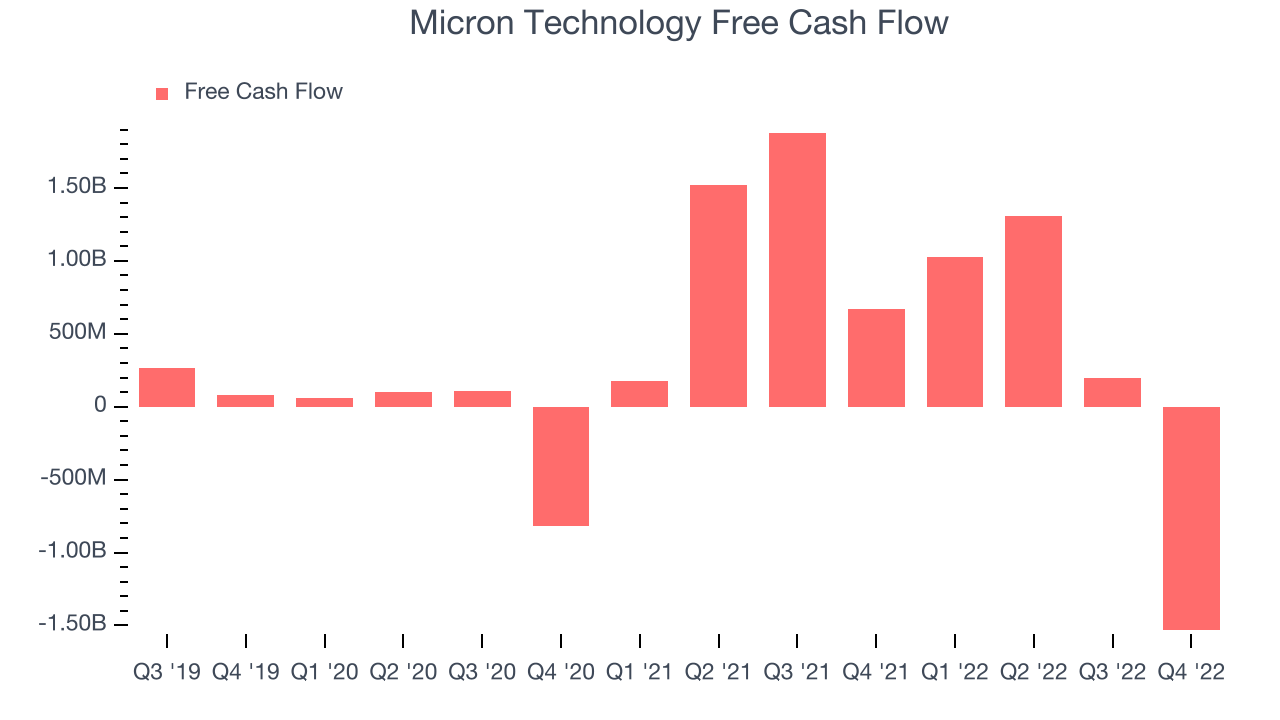 Micron Technology produced free cash flow of $1 billion in the last year, which is 3.7% of revenue. It's good to see positive free cash flow, and that puts the company in a position to reinvest, but we wouldn't mind seeing cashflow yield improve a little.

Micron Technology’s average return on invested capital (ROIC) over the last 5 years of 21% implies it has a strong competitive position and is able to invest in profitable growth over the long term.

With a market capitalization of $59.8 billion, more than $10.5 billion in cash and with free cash flow over the last twelve months being positive, the company is in a very strong position to invest in growth.

We struggled to find many strong positives in these results. On the other hand, it was less good to see that the revenue growth was quite weak and the revenue guidance for the next quarter missed analysts' expectations. Overall, it seems to us that this was a complicated quarter for Micron Technology. The company is flat on the results and currently trades at $51.24 per share.

When considering Micron Technology, investors should take into account its valuation and business qualities, as well as what happened in the latest quarter. We cheer for everyone who is making the lives of others easier through technology, but in the case of Micron Technology we will be cheering from the sidelines. Its revenue growth has been weak, but at least that growth rate is expected to increase in the short term.

Given its price to earnings ratio based on the next twelve months is 203.8x, Micron Technology is priced with expectations of a long-term growth, and there's no doubt it is a bit of a market darling, at least for some. While we have no doubt one can find things to like about the company, we think there might be better opportunities in the market and at the moment don't see many reasons to get involved.