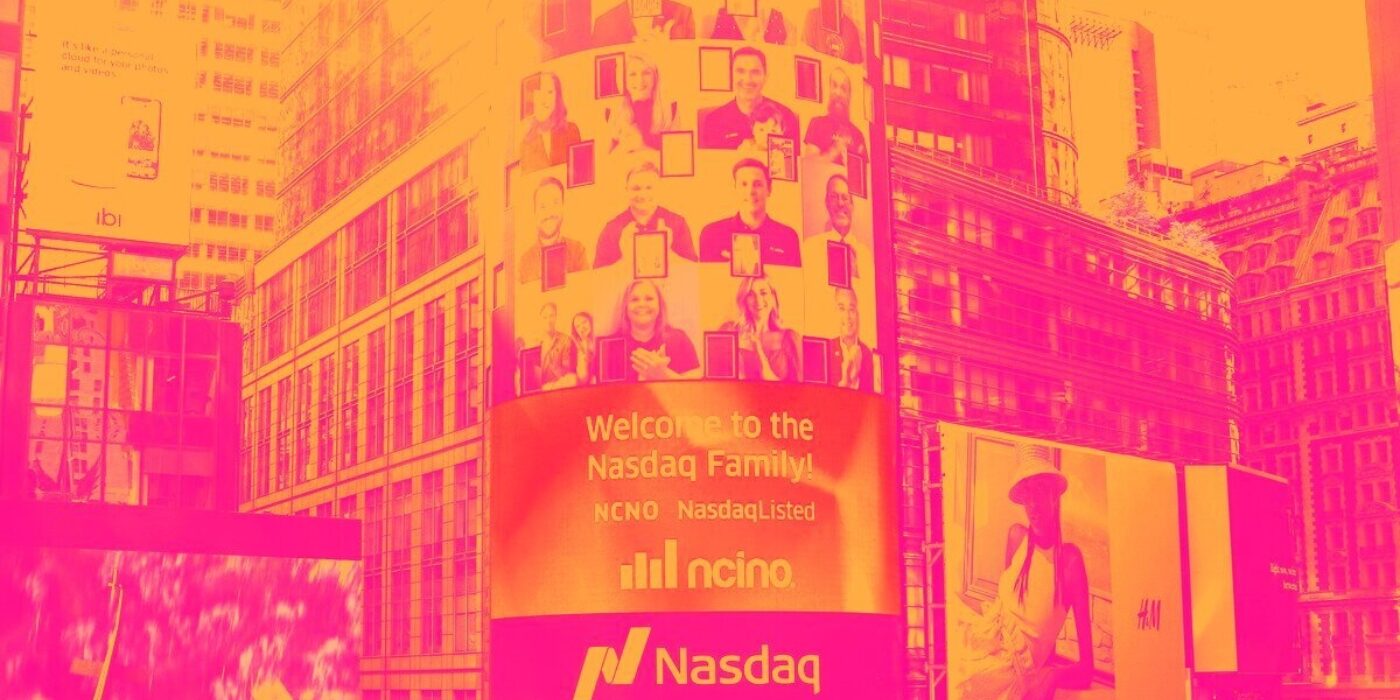 Maker of operating system for banks nCino (NASDAQ:NCNO) announced better-than-expected results in the Q3 FY2023 quarter, with revenue up 50.3% year on year to $105.2 million. The company expects that next quarter's revenue would be around $104.5 million, which is the midpoint of the guidance range. That was in roughly line with analyst expectations. nCino made a GAAP loss of $22.6 million, down on its loss of $13.6 million, in the same quarter last year.

Founded in 2011 in North Carolina, nCino (NASDAQ:NCNO) makes cloud-based operating systems for banks and provides that software as a service.

Banks are complex to run, heavily regulated and often lag far behind the curve in adopting cloud technologies, instead relying on decades old on-premise software. nCino offers cloud-based software that promises to replace the functionalities of the banks legacy systems, making it easier and cheaper to operate the bank. The company built its software on top of the Salesforce platform and as a result has a very close partnership with Salesforce (CRM).

nCino works as a central system for banks and credit unions allowing them to onboard new customers by offering them loans or checking and savings accounts, all online and in compliance with regulatory requirements. The platform becomes the single central location where all the data about customers and decisions are stored, which improves effectiveness of banking operations and allows banks to offer more personalised services to their clients.

Consumers these days are accustomed to frictionless digital experiences from online shopping to ordering food or hailing a cab. Financial services firms are notoriously risk averse in adopting modern software, often lacking the resources or competency to develop the digital solutions in-house. That drives demand for software as a service platforms that allows banks and other finance institutions to offer the digital services without having to run or maintain them.

As you can see below, nCino's revenue growth has been impressive over the last two years, growing from quarterly revenue of $54.2 million in Q3 FY2021, to $105.2 million.

This was another standout quarter with the revenue up a splendid 50.3% year on year. Quarter on quarter the revenue increased by $5.66 million in Q3, which was roughly in line with the Q2 2023 increase. This steady quarter-on-quarter growth shows the company is able to maintain a strong growth trajectory.

Guidance for the next quarter indicates nCino is expecting revenue to grow 39.4% year on year to $104.5 million, improving on the 32.4% year-over-year increase in revenue the company had recorded in the same quarter last year. Ahead of the earnings results the analysts covering the company were estimating sales to grow 26.7% over the next twelve months.

What makes the software as a service business so attractive is that once the software is developed, it typically shouldn't cost much to provide it as an ongoing service to customers. nCino's gross profit margin, an important metric measuring how much money there is left after paying for servers, licenses, technical support and other necessary running expenses was at 59% in Q3. 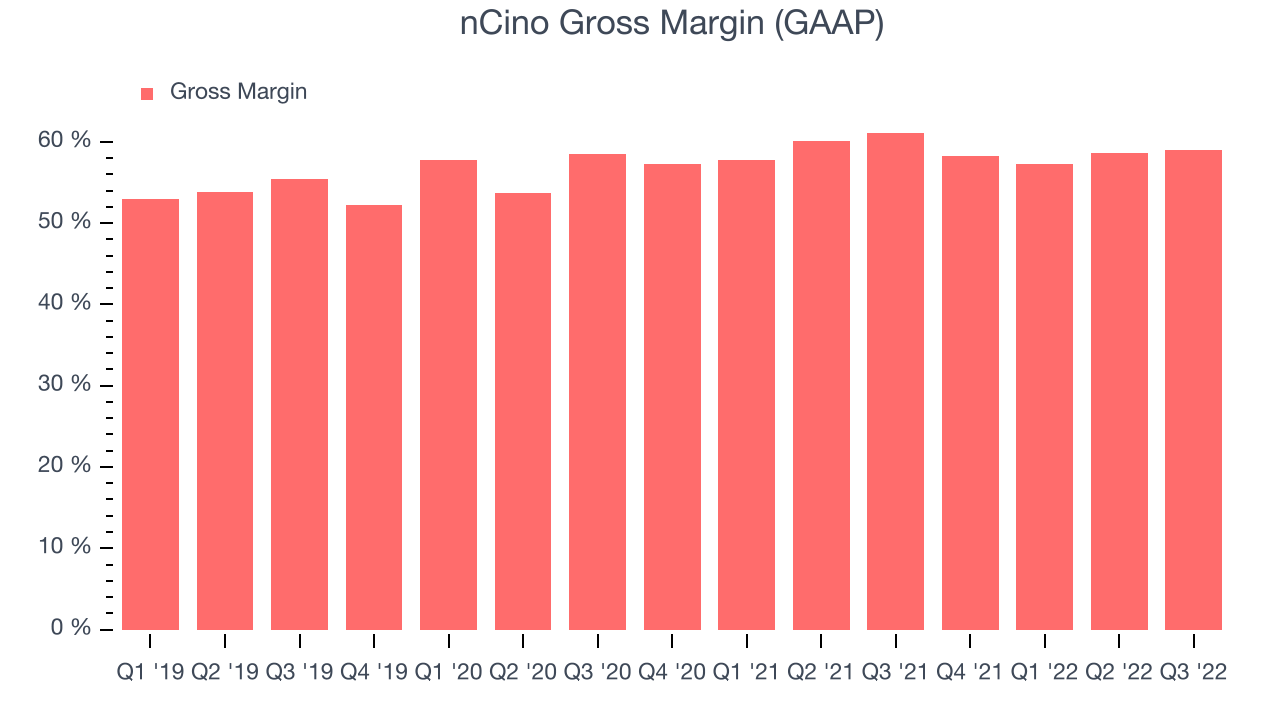 That means that for every $1 in revenue the company had $0.59 left to spend on developing new products, marketing & sales and the general administrative overhead. This would be considered a low gross margin for a SaaS company and we would like to see it start improving.

If you have followed StockStory for a while, you know that we put an emphasis on cash flow. Why, you ask? We believe that in the end cash is king, as you can't use accounting profits to pay the bills. nCino burned through $8.66 million in Q3.

nCino has burned through $30.1 million in cash over the last twelve months, resulting in a negative 8.05% free cash flow margin. This below average FCF margin is a result of nCino's need to invest in the business to continue penetrating its market.

Since it has still been burning cash over the last twelve months it is worth keeping an eye on nCino’s balance sheet, but we note that with a market capitalization of $2.76 billion and more than $106.4 million in cash, the company has the capacity to continue to prioritise growth over profitability.

We were impressed by the exceptional revenue growth nCino delivered this quarter. On the other hand, it was unfortunate to see that the revenue guidance for the next quarter missed analysts' expectations. Zooming out, we think this was still a decent, albeit mixed, quarter, showing the company is staying on target. The company is flat on the results and currently trades at $26.11 per share.

When considering nCino, investors should take into account its valuation and business qualities, as well as what happened in the latest quarter. We cheer for everyone who is making the lives of others easier through technology, but in case of nCino we will be cheering from the sidelines. Its revenue growth has been impressive, though we don't expect it to maintain historical growth rates. But while its efficient customer acquisition is better than many similar companies, the downside is that its gross margins show its business model is much less lucrative than the best software businesses and its cash burn raises the question if it can sustainably maintain its growth.

Given its price to sales ratio based on the next twelve months is 6.1x, nCino is priced with expectations of a long-term growth, and there's no doubt it is a bit of a market darling, at least for some. While we have no doubt one can find things to like about the company, we think there might be better opportunities in the market and at the moment don't see many reasons to get involved.