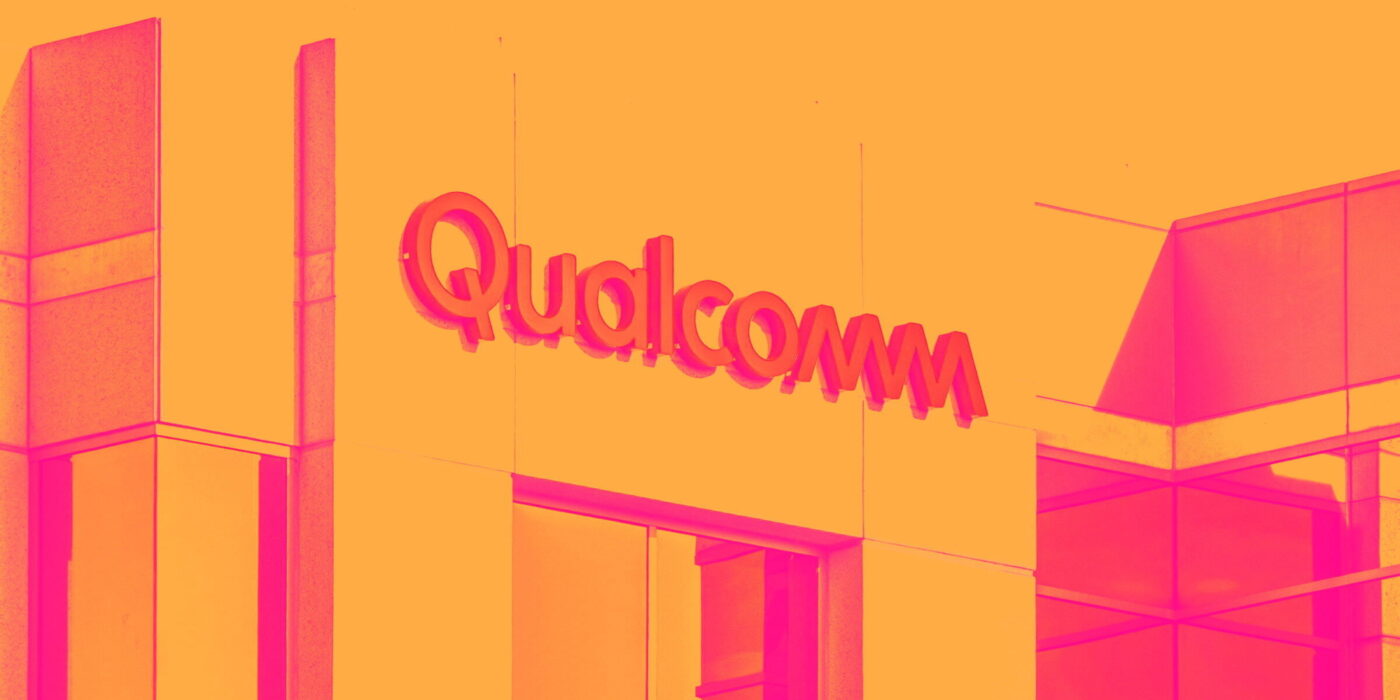 Wireless chipmaker Qualcomm (NASDAQ:QCOM) reported results in line with analyst expectations in Q4 FY2022 quarter, with revenue up 22% year on year to $11.3 billion. However, guidance for the next quarter was less impressive, coming in at $9.6 billion at the midpoint, being 20.3% below analyst estimates. Qualcomm made a GAAP profit of $2.87 billion, improving on its profit of $2.79 billion, in the same quarter last year.

Qualcomm has one of the more unique semiconductor business models. Its research has created the intellectual property that is the foundation for the global wireless industry. In the 1990s they developed the original code division multiple access (CDMA) technology that became the standard for cell phone networks first in the US, then around the world. Qualcomm has had a hand in developing Wi-Fi, GPS, and Bluetooth, along with RFID (Radio Frequency ID), and 4G and 5G technology.

It monetizes its portfolio of more than 140,000 patents through designing semiconductors used in handsets, autos, and IoT and also through licensing its patents for others to incorporate in their own products. Qualcomm outsources manufacturing of its chips, its main product family is the Snapdragon chip, an all in one chip used to power mobile devices: it includes a cellular modem, integrated Wi-Fi, Bluetooth, and GPS, along with a CPU (central processing unit) and GPU (graphics processing unit). Different versions of Snapdragon are used in different types of devices (tablets, laptops, handsets) based on the different battery life or processing requirements.

Qualcomm’s stranglehold on wireless’s foundational technology has enmeshed it in disputes over royalty payments, which are highly consequential to Qualcomm’s business model as it receives a royalty of roughly 5% of the average price of every smartphone sold, and those licensing revenues are nearly pure profit. In 2017, Apple refused to continue paying the royalty which degenerated into a lawsuit with Apple switching to Intel modem chips, only to return to Qualcomm in 2019, when Intel decided not to make 5G modems. Qualcomm also ran into similar disputes with Chinese handset makers such as Huawei in the past few years, all of which have since been resolved, with Qualcomm continuing to receive its royalty payments. Because of its unique position in the semiconductor world, Qualcomm became a geopolitical football during China-US trade tensions over the past few years: China blocked Qualcomm’s attempted acquisition of NXPI over antitrust concerns, while the US blocked Broadcom proposed hostile takeover of Qualcomm over national security concerns.

Qualcomm's revenue growth over the last three years has been strong, averaging 29.4% annually. And as you can see below, last year has been especially strong, with quarterly revenue growing from $9.33 billion to $11.3 billion. Semiconductors are a cyclical industry and long-term investors should be prepared for periods of high growth, followed by periods of revenue contractions (which can sometimes offer opportune times to buy). 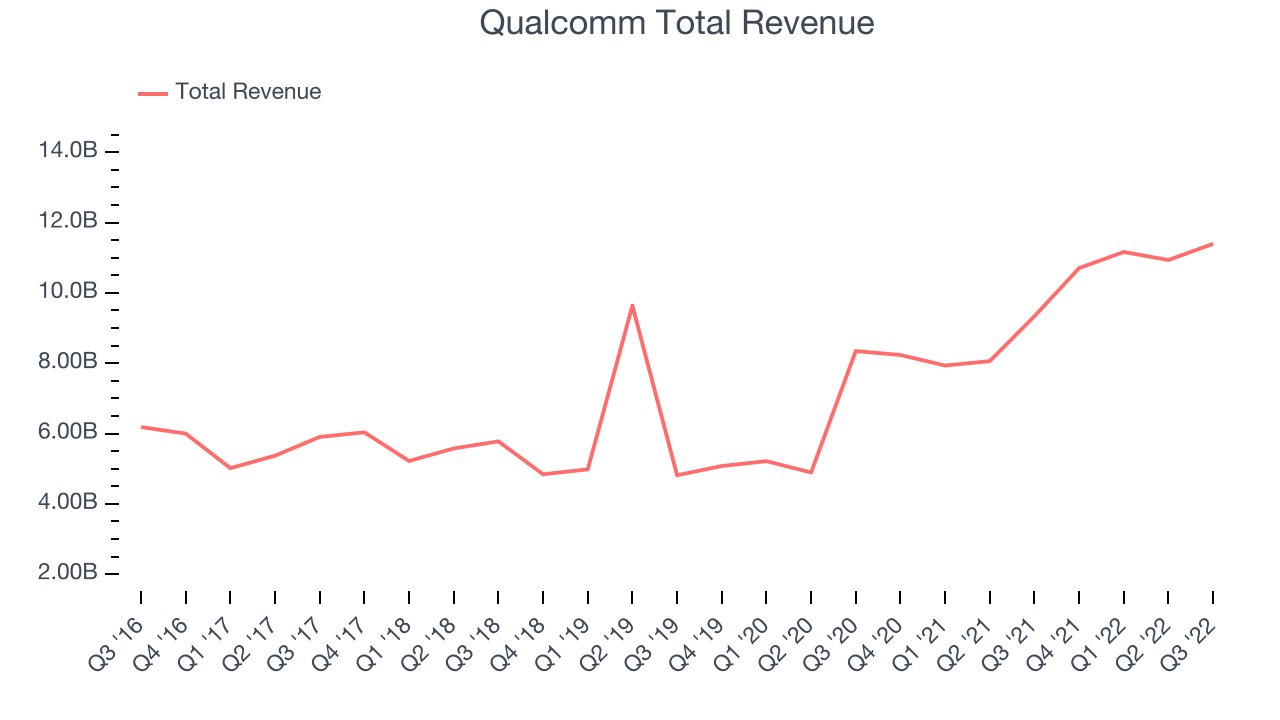 This was a decent quarter for Qualcomm as revenues grew 22%, topping analyst estimates by 0.28%. This marks 9 straight quarters of revenue growth, which means the current upcycle has had a good run, as a typical upcycle tends to be 8-10 quarters.

Qualcomm's revenue growth is expected to go negative next quarter, with the company guiding to decline of 10.3% YoY next quarter, but analyst consensus sees growth of 5.14% over the next twelve months. 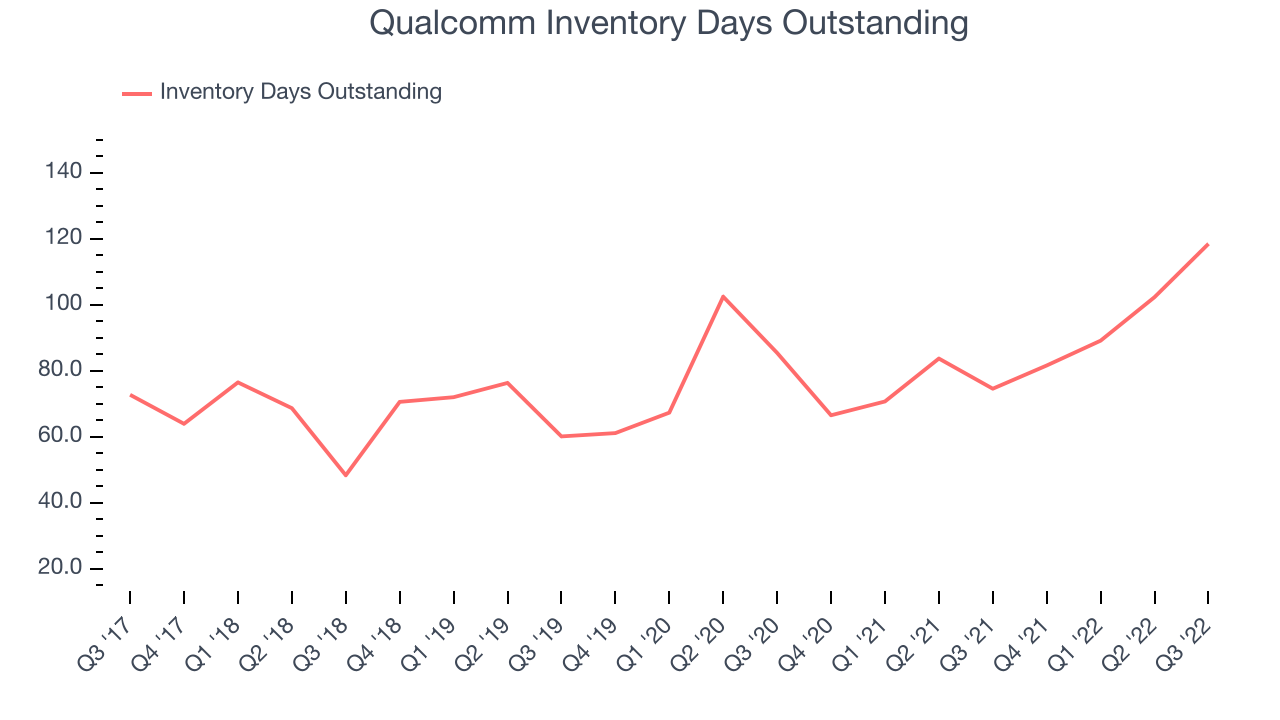 This quarter, Qualcomm’s inventory days came in at 119, 42 days above the five year average, suggesting that that inventory has grown to higher levels than what we used to see in the past.

Qualcomm's gross profit margin, how much the company gets to keep after paying the costs of manufacturing its products, came in at 57.2% in Q4, down 0.5 percentage points year on year. 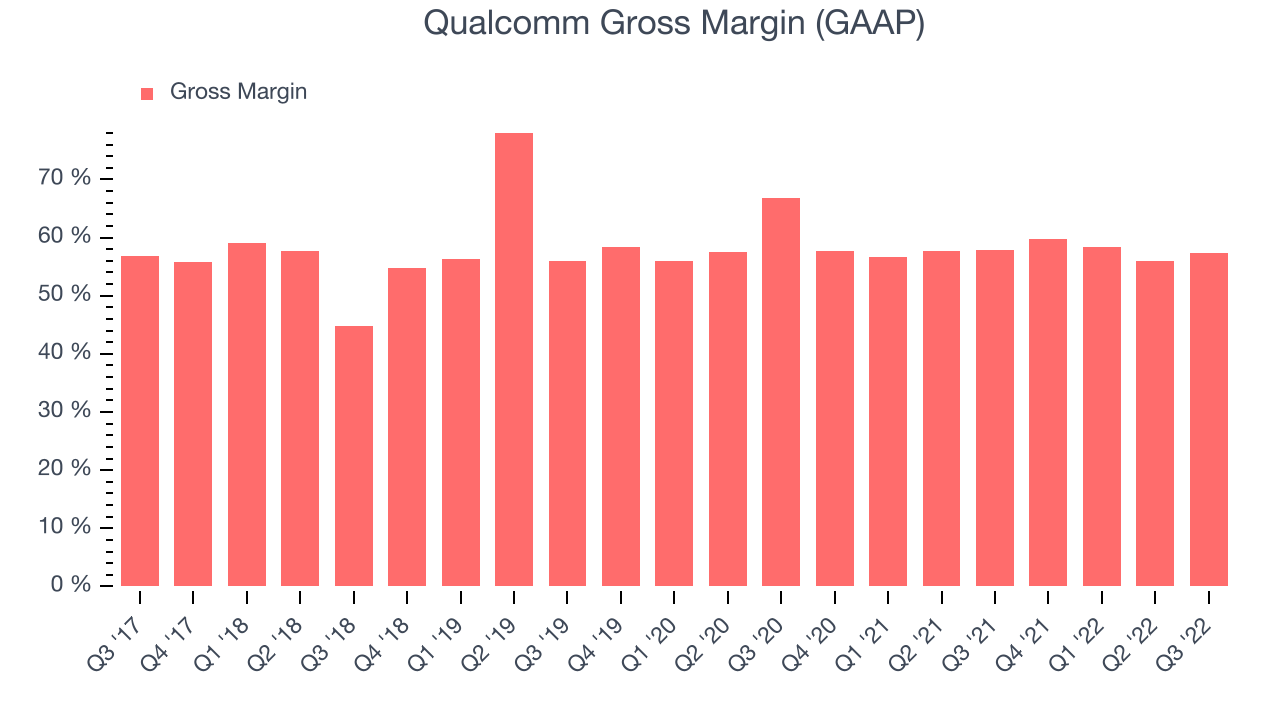 Qualcomm's gross margins have been stable over the past year, averaging 57.8%, and remains well ahead of most of its semiconductor peers, indicative of a potent competitive offering, pricing power, and solid inventory management.

Qualcomm reported an operating margin of 37.3% in Q4, up 0.9 percentage points year on year. Operating margins are one of the best measures of profitability, telling us how much the company gets to keep after paying the costs of manufacturing the product, selling and marketing it and most importantly, keeping products relevant through research and development spending. 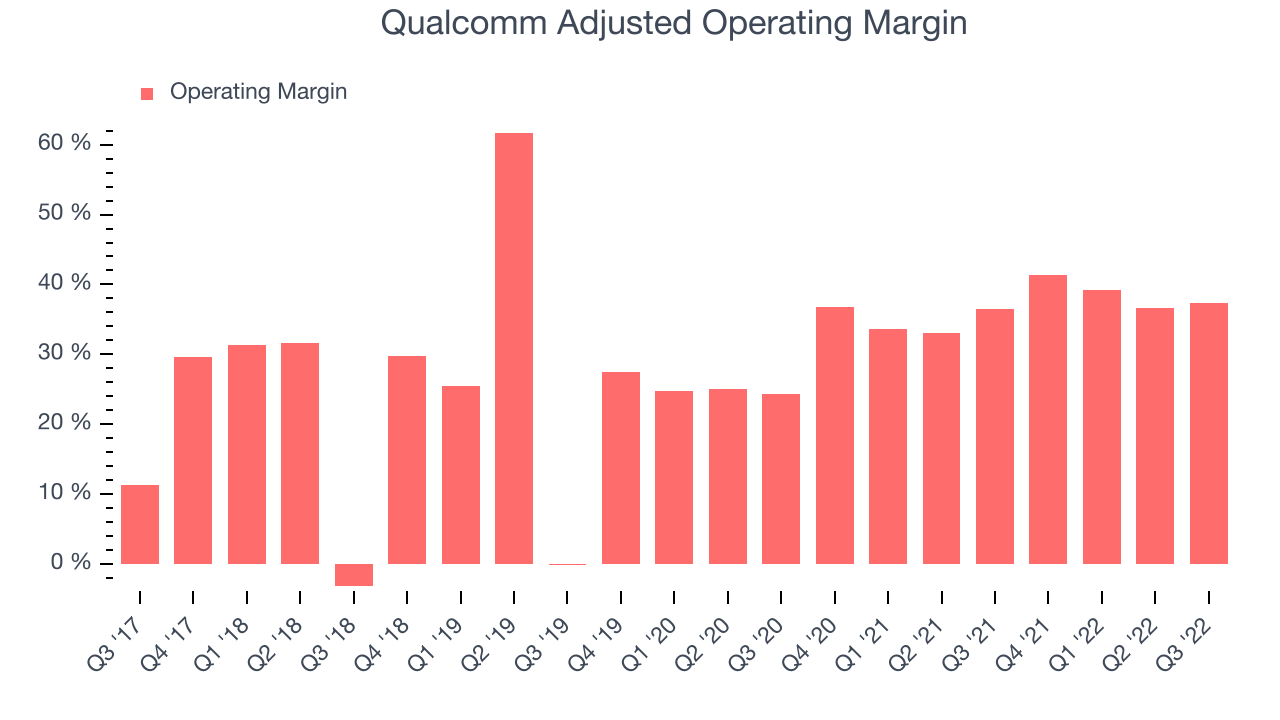 Operating margins have been trending up over the last year, averaging 38.6%. Qualcomm's margins remain one of the highest in the semiconductor industry, driven by its highly efficient operating model's economies of scale.

Earnings are important, but we believe cash is king as you cannot pay bills with accounting profits. Qualcomm's free cash flow came in at $812 million in Q4, up 25.5% year on year. 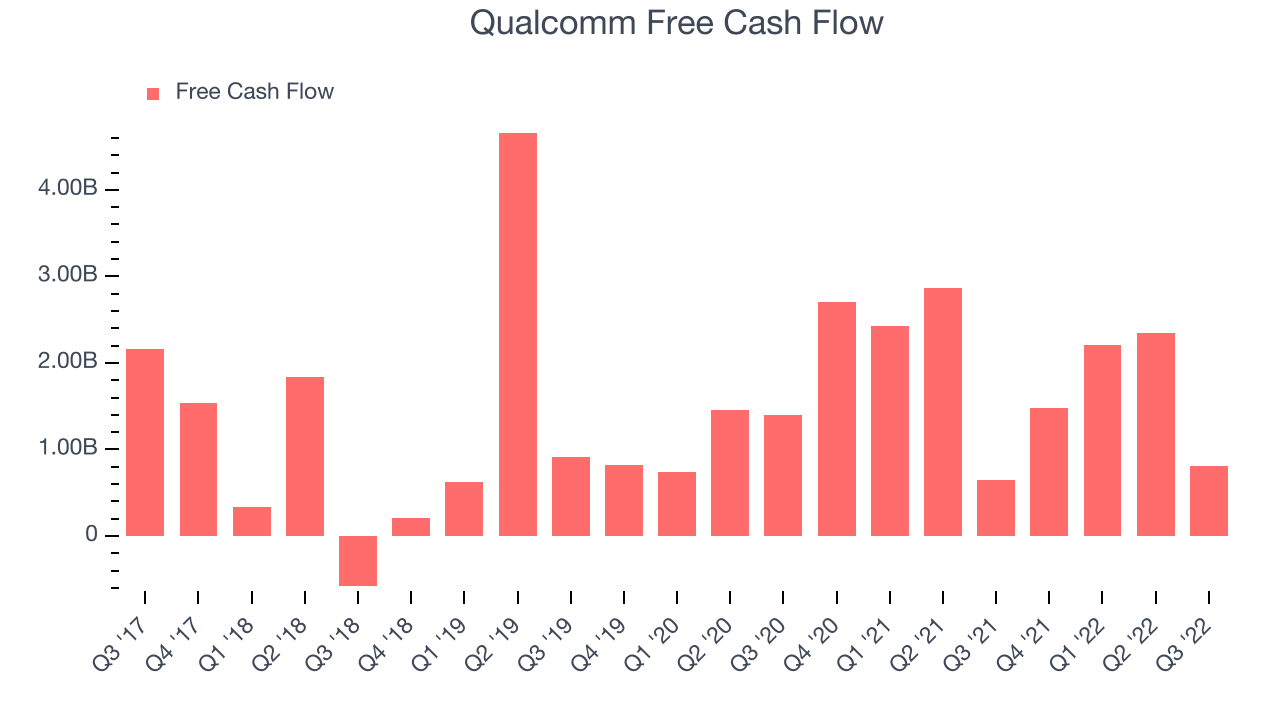 Qualcomm has generated $6.83 billion in free cash flow over the last twelve months, translating to 15.4% of revenues. This is a strong result; Qualcomm's free cash flow conversion was higher than most semiconductor companies, in the last year. If it maintains this level of cash generation, it will be able to invest plenty in new products, and ride out any cyclical downturn more easily.

Qualcomm’s average return on invested capital (ROIC) over the last 5 years of 57.8% implies it has a strong competitive position and is able to invest in profitable growth over the long term.

Sporting a market capitalization of $131 billion, more than $6.38 billion in cash and with positive free cash flow over the last twelve months, we're confident that Qualcomm has the resources it needs to pursue a high growth business strategy.

We struggled to find many strong positives in these results. On the other hand, it was unfortunate to see that the revenue guidance for the next quarter missed analysts' expectations and inventory levels increased. Overall, it seems to us that this was a complicated quarter for Qualcomm. The company currently trades at $115.86 per share.

Qualcomm may have had a bad quarter, but investors should also consider its valuation and business qualities, when assessing the investment opportunity. We think Qualcomm is a solid business. We would expect growth rates to moderate from here, but its revenue growth has been strong, over the last three years. On top of that, its impressive operating margins are indicative of an highly efficient business model, and its high return on invested capital suggests it is well run and in a strong position for profit growth.

Qualcomm's price to earnings ratio based on the next twelve months is 8.8x. There are definitely things to like about Qualcomm and looking at the semiconductors landscape right now, it seems that the company trades at a pretty interesting price point.

The Wall St analysts covering the company had a one year price target of $174.6 per share right before these results, implying that they saw upside in buying Qualcomm even in the short term.