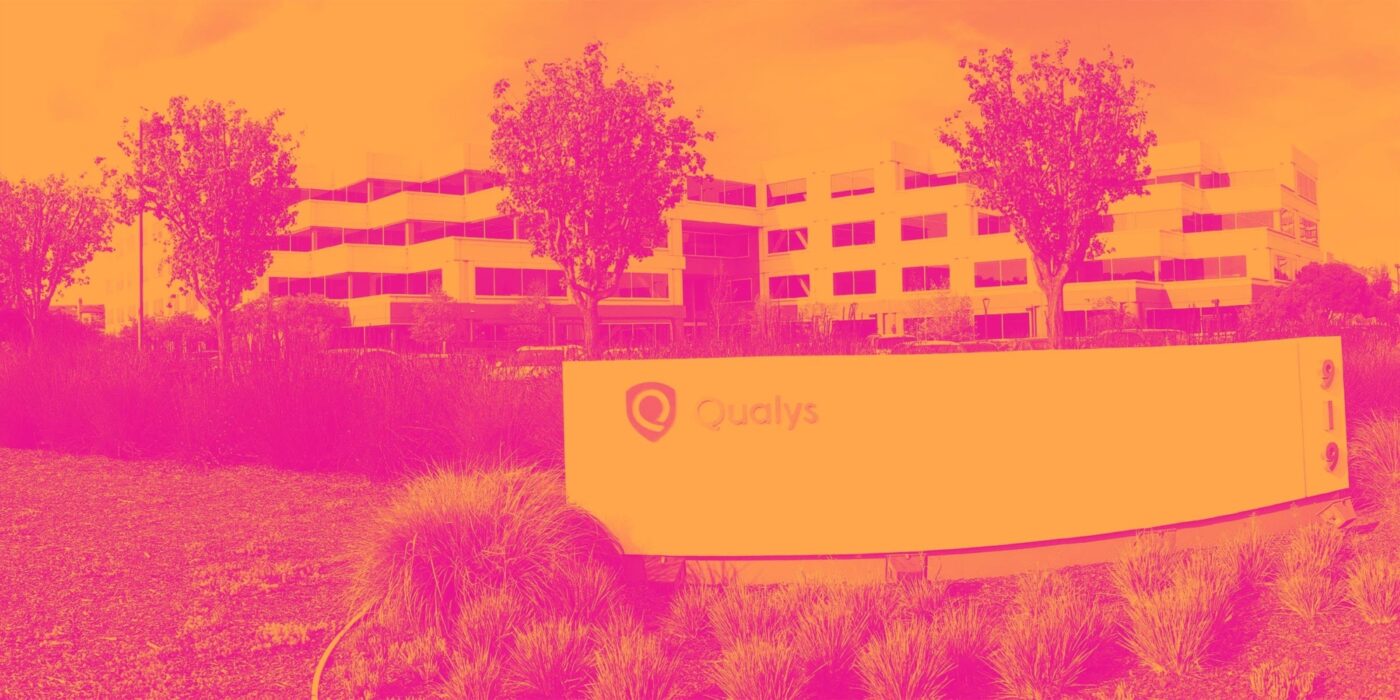 Cloud security and compliance software provider Qualys (NASDAQ:QLYS) reported results in line with analyst expectations in Q3 FY2022 quarter, with revenue up 19.6% year on year to $125.5 million. The company expects that next quarter's revenue would be around $130.2 million, which is the midpoint of the guidance range. That was in roughly line with analyst expectations. Qualys made a GAAP profit of $27.6 million, flat year on year.

The cyberattack surface has expanded rapidly in recent years. The digitization of business processes and the shift of enterprise resources to the cloud have led to the explosion of IT applications and systems. To secure their systems and stay compliant with the latest regulations, organizations need to adopt a security platform to efficiently monitor all their assets.

Qualys helps organizations prevent and detect cyber threats using its vulnerability management software, which scans and discovers all the IT assets owned by a company. Its software automatically collects and analyses data from these assets to detect potential vulnerabilities, such as weak security policies, unpatched software, outdated apps, and compromised logins. Then, it prioritizes these issues based on severity and provides recommendations on how they can be remediated. Qualys is also capable of automating the full threat detection process so that security analysts can focus on the most dangerous threats.

For example, due to the scale of their network infrastructure eBay needed a solution that would automatically find the most recent vulnerabilities without requiring constant research by security specialists. It also needed to make sure that the networks of its business partners are not posing a risk. Qualys is able to automatically scan eBay’s and its partners networks, provide detailed inventory of all apps and devices and alert the information security team on any vulnerabilities, saving them time and cost.

Beyond automation, Qualys has been investing in the endpoint security space to cover the detection and prevention of threats on devices such as laptops, servers, mobile phones, as well as cloud environments.

Other companies with similar capabilities as Qualys include Rapid7 (NASDAQ:RPD), Tenable (NASDAQ:TENB) and cloud security innovators such as CrowdStrike (NASDAQ:CRWD) and FireEye (NASDAQ:FEYE).

As you can see below, Qualys's revenue growth has been mediocre over the last two years, growing from quarterly revenue of $93 million in Q3 FY2020, to $125.5 million. 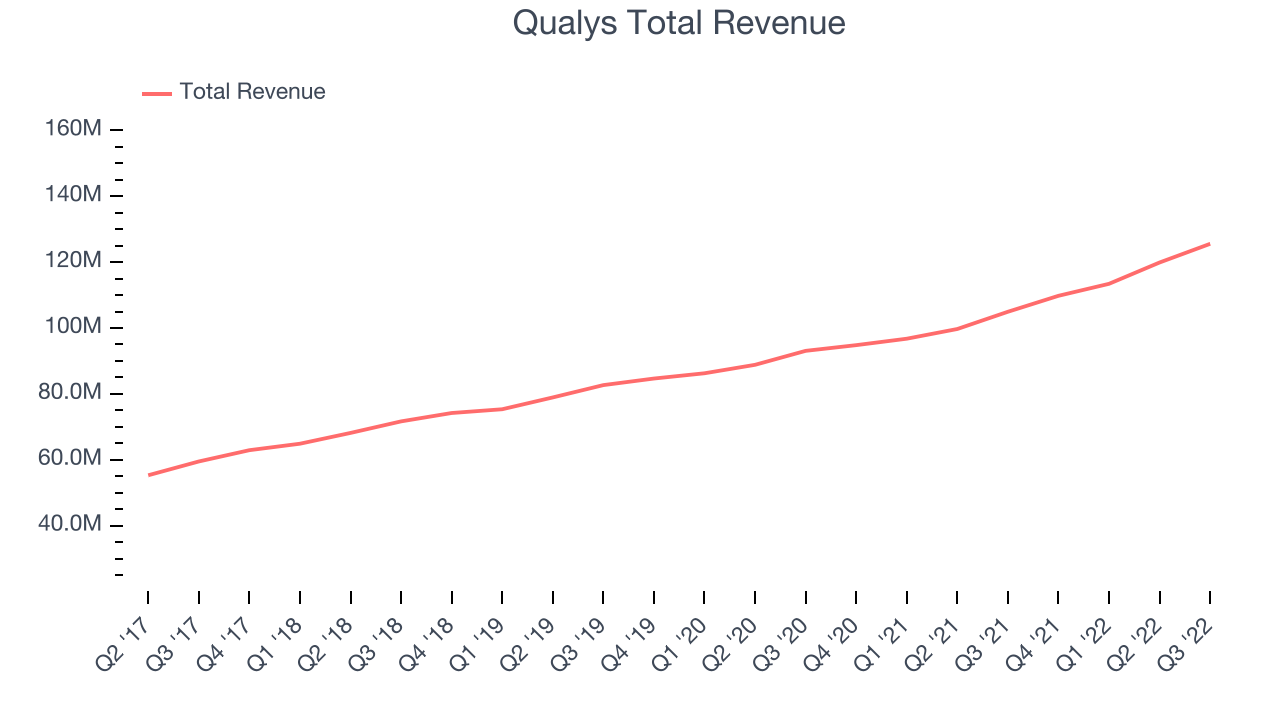 This quarter, Qualys's quarterly revenue was once again up 19.6% year on year. But the growth did slow down a little compared to last quarter, as Qualys increased revenue by $5.66 million in Q3, compared to $6.47 million revenue add in Q2 2022. We'd like to see revenue increase by a greater amount each quarter, but a one-off fluctuation is usually not concerning.

Guidance for the next quarter indicates Qualys is expecting revenue to grow 18.6% year on year to $130.2 million, improving on the 15.8% year-over-year increase in revenue the company had recorded in the same quarter last year. Ahead of the earnings results the analysts covering the company were estimating sales to grow 17.4% over the next twelve months.

What makes the software as a service business so attractive is that once the software is developed, it typically shouldn't cost much to provide it as an ongoing service to customers. Qualys's gross profit margin, an important metric measuring how much money there is left after paying for servers, licenses, technical support and other necessary running expenses was at 79.2% in Q3. 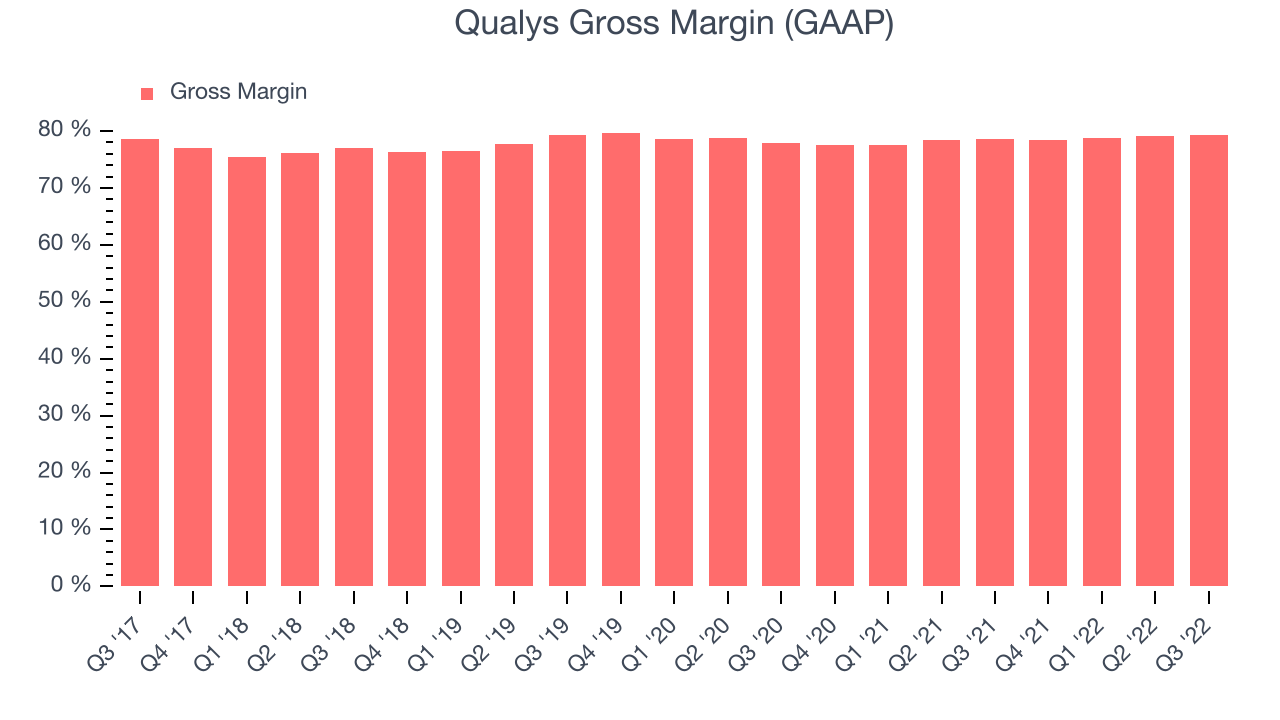 That means that for every $1 in revenue the company had $0.79 left to spend on developing new products, marketing & sales and the general administrative overhead. This is a good gross margin that allows companies like Qualys to fund large investments in product and sales during periods of rapid growth and be profitable when they reach maturity. It is good to see that the gross margin is staying stable which indicates that Qualys is doing a good job controlling costs and is not under pressure from competition to lower prices.

If you follow StockStory for a while, you know that we put an emphasis on cash flow. Why, you ask? We believe that in the end cash is king, as you can't use accounting profits to pay the bills. Qualys's free cash flow came in at $40.9 million in Q3, roughly the same as last year. 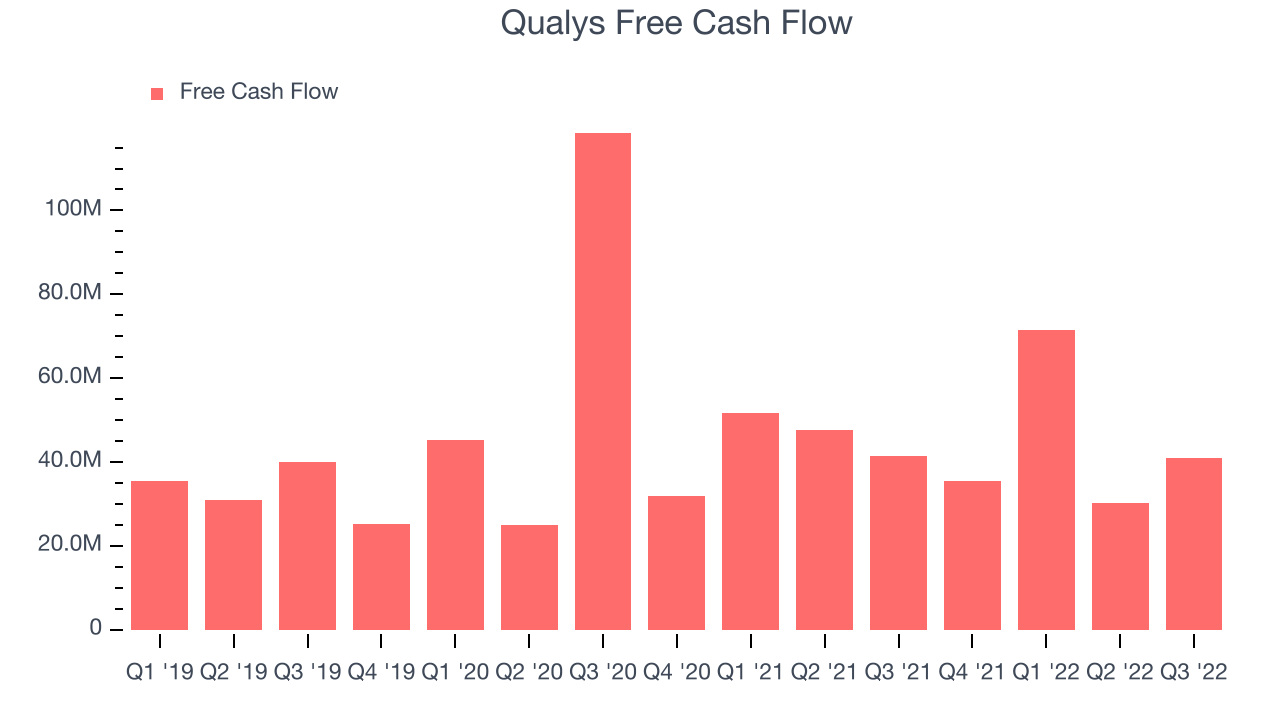 Qualys has generated $178.1 million in free cash flow over the last twelve months, an impressive 38% of revenues. This robust FCF margin is a result of Qualys asset lite business model, scale advantages, and strong competitive positioning, and provides it the option to return capital to shareholders while still having plenty of cash to invest in the business.

With a market capitalization of $5.35 billion Qualys is among smaller companies, but its more than $385.2 million in cash and positive free cash flow over the last twelve months give us confidence that Qualys has the resources it needs to pursue a high growth business strategy.

This was a mostly in-line quarter for Qualys, showing the company is staying on its trajectory. But the market is volatile following another interest rate hike and the stock is down 6.59% on the results and currently trades at $125 per share.

When considering Qualys, investors should take into account its valuation and business qualities, as well as what happened in the latest quarter. There are a number of reasons why we think Qualys is a great business. Its revenue growth has been weak, and analysts expect growth rates to deteriorate from there. But on a positive note, its bountiful generation of free cash flow empowers it to invest in growth initiatives, and its very efficient customer acquisition hints at the potential for strong profitability.

The market is certainly expecting long term growth from Qualys given its price to sales ratio based on the next twelve months is 9.5x. But looking at the tech landscape today, Qualys's qualities stand out and we still like it at this price.

The Wall St analysts covering the company had a one year price target of $150 per share right before these results, implying that they saw upside in buying Qualys even in the short term.