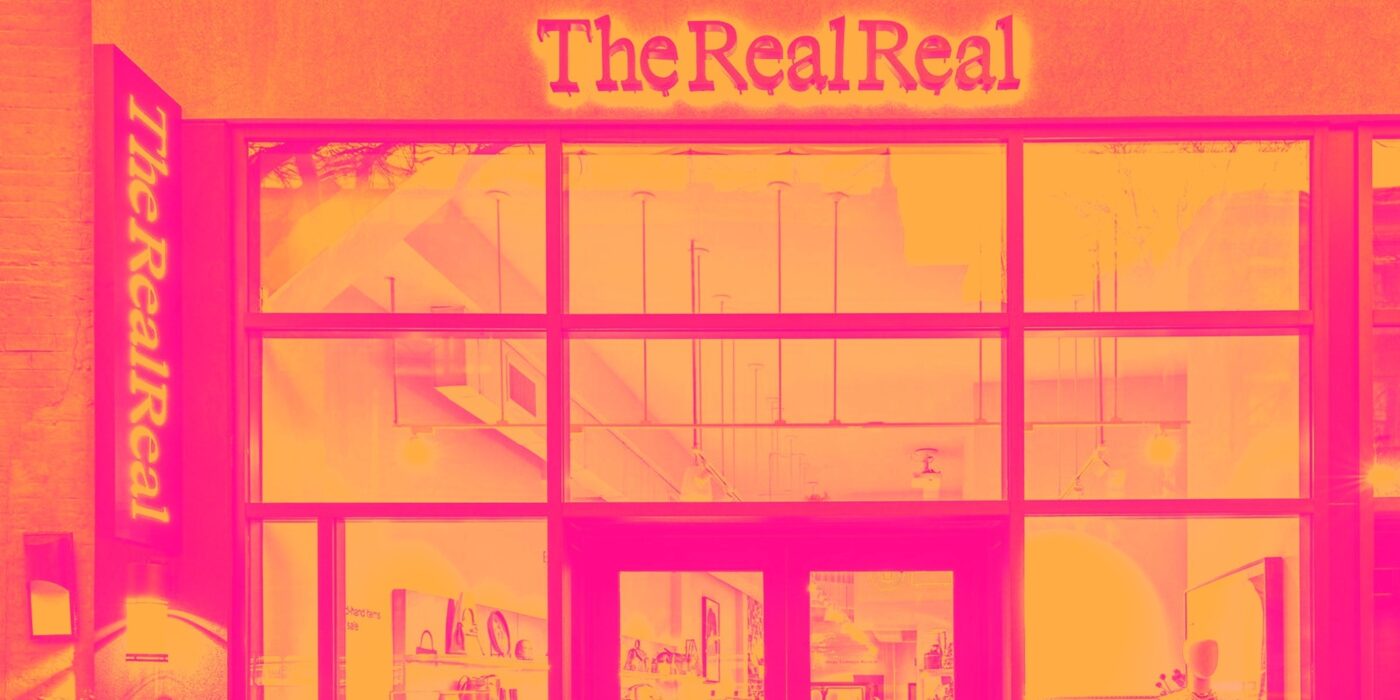 Secondhand luxury marketplace The RealReal (NASDAQ: REAL) fell short of analyst expectations in Q3 FY2022 quarter, with revenue up 20% year on year to $142.7 million. Guidance for the next quarter also missed analyst expectations with revenues guided to $155 million at the midpoint, or 11.3% below analyst estimates. The RealReal made a GAAP loss of $47.2 million, improving on its loss of $57.1 million, in the same quarter last year.

The RealReal provides an online marketplace for consignment luxury goods with its key differentiation being that it authenticates each item sold on its platform, reducing risk for buyers of expensive secondhand goods, while also enabling it to provide fulfillment services. The top selling categories are men’s and women’s apparel, watches and jewelry, and home and art. Its authentication differentiation has enabled The RealReal to grow an audience of buyers, which in turn has attracted high net worth individuals willing to sell their used goods. The key differentiation on the seller side is that The RealReal has reduced the friction of selling by taking care of packaging, shipping, listing and photos.

This intermediary model is more expensive to operate than a traditional marketplace, which tends to be asset lite, merely connecting buyers and sellers, but necessary to unlock a previously latent supply of merchandise that was relegated to brick and mortar consignment shops. As a result, The RealReal charges one of the highest take rates (commissions) in online commerce.

The RealReal's revenue growth over the last three years has been strong, averaging 29.9% annually. 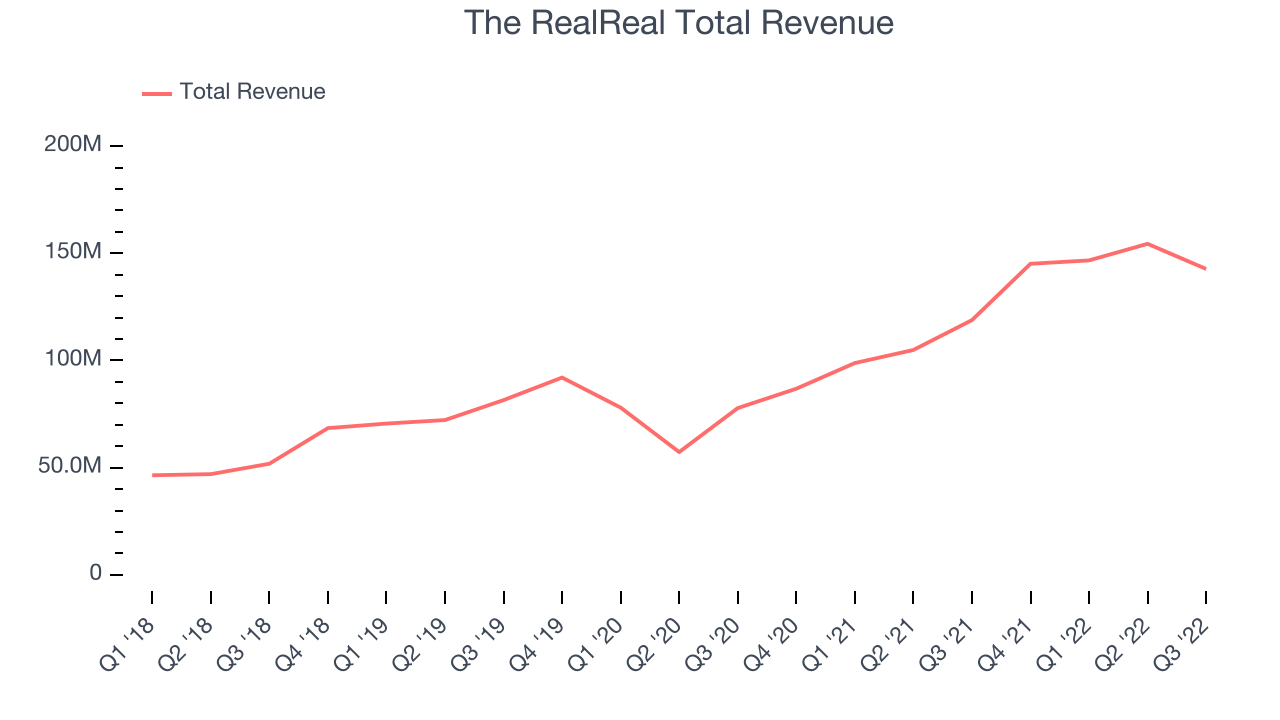 This quarter, The RealReal reported a decent 20% year on year revenue growth, but this result fell short of what analysts were expecting.

Guidance for the next quarter indicates The RealReal is expecting revenue to grow 6.8% year on year to $155 million, slowing down from the 67.1% year-over-year increase in revenue the company had recorded in the same quarter last year. Ahead of the earnings results the analysts covering the company were estimating sales to grow 22% over the next twelve months.

Over the last two years the number of The RealReal's paying users, a key usage metric for the company, grew 19.8% annually to 950 thousand users. This is a strong growth for a consumer internet company. 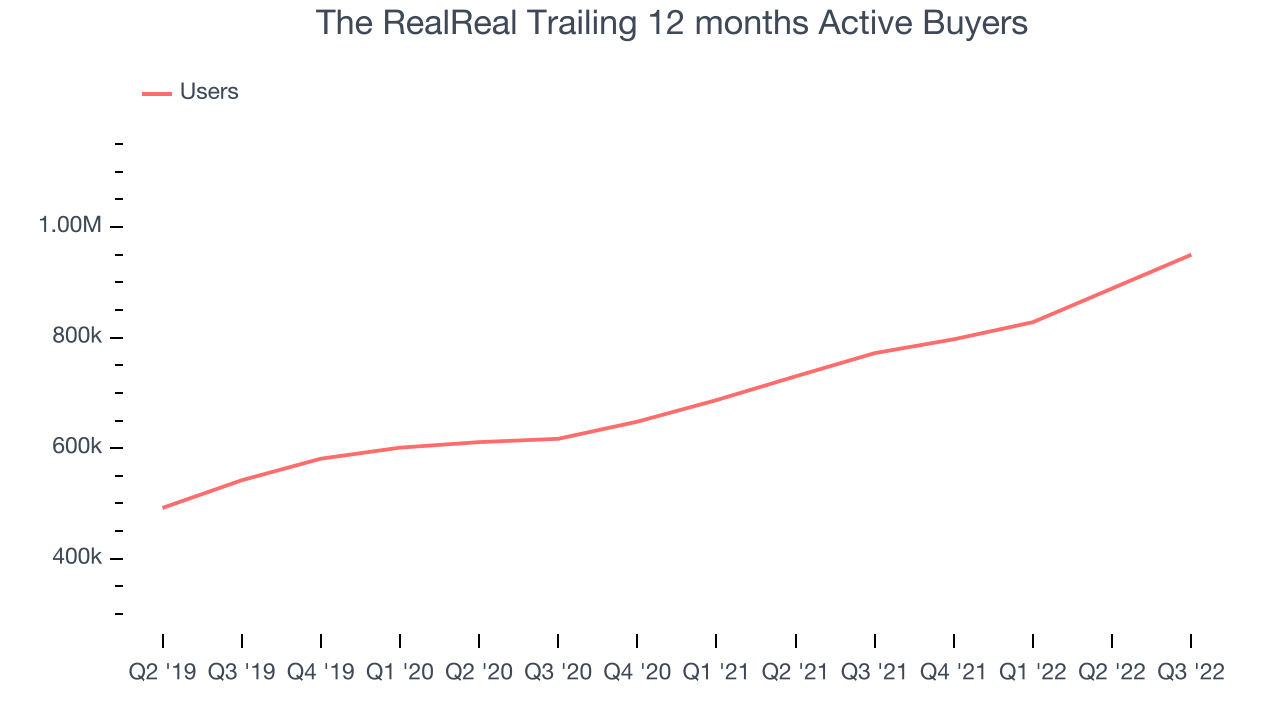 In Q3 the company added 178 thousand paying users, translating to a 23% growth year on year.

Average revenue per user (ARPU) is a critical metric to track for every consumer internet product and for The RealReal it a function of how much its users spend on the platform and what is The RealReal's take rate (cut) from each transaction. 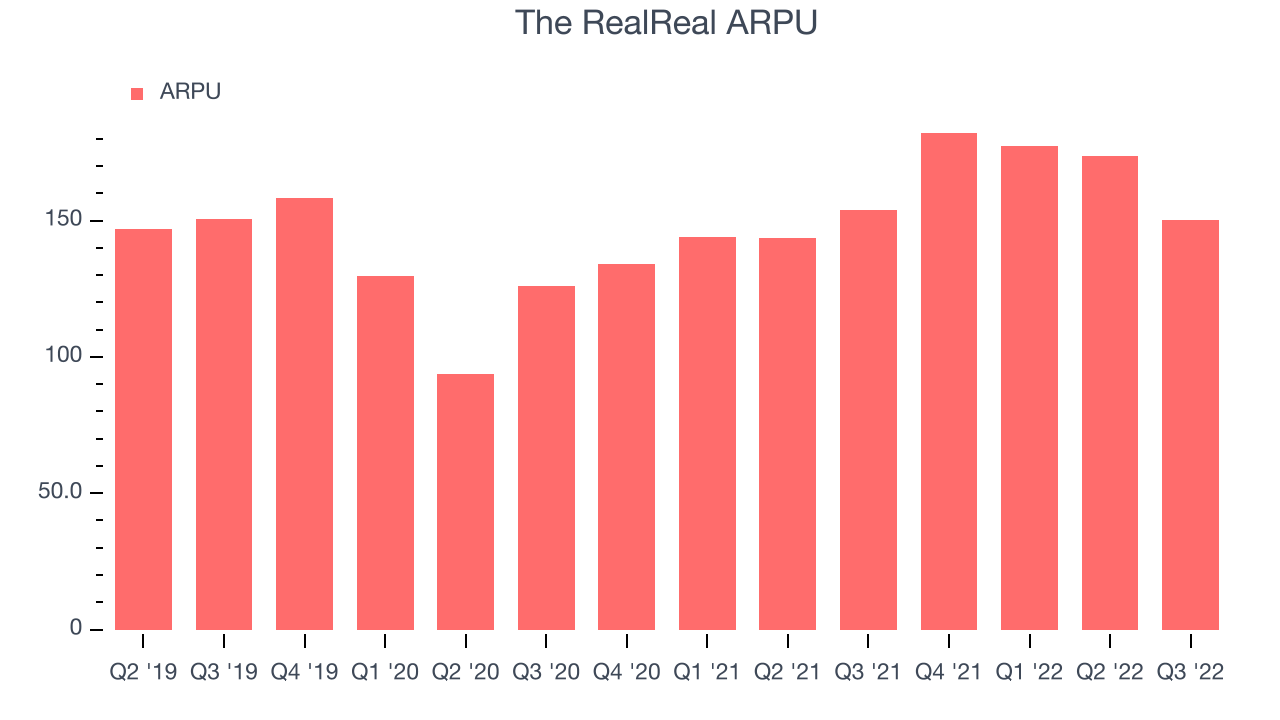 The RealReal’s ARPU growth has been decent over the last two years, averaging 18.5%. The ability to increase price while still growing its user base shows the value of The RealReal’s platform. This quarter, ARPU shrank 2.41% year on year, settling in at $150.21 for each of the paying users.

Consumer internet businesses like The RealReal grow by a combination of product virality, paid advertisement and occasional incentives, unlike enterprise products that are typically sold by sales teams.

The RealReal is very efficient at acquiring new users, spending only 20.1% of its gross profit on marketing over the last year. This level of sales and marketing spend efficiency is indicative of a combination of scale and a highly differentiated product offering, which gives The RealReal the freedom to invest its resources into new growth initiatives while still maintaining optionality.

The RealReal's EBITDA was negative $28.1 million this quarter, which translates to a -19.8% margin. The company is one of the least profitable consumer internet business and over the last twelve months The RealReal has EBITDA margins of -20.3%.

If you follow StockStory for a while, you know that we put an emphasis on cash flow. Why, you ask? We believe that in the end cash is king, as you can't use accounting profits to pay the bills. The RealReal burned through $17.3 million in Q3.

The RealReal has burned through $149.9 million in cash over the last twelve months, a -25.5% free cash flow margin. This low FCF margin is a result of The RealReal's need to continue investing in the business in order to fuel growth.

Since it has still been burning cash over the last twelve months it is worth keeping an eye on The RealReal’s balance sheet, but we note that with a market capitalization of $132.7 million and more than $300.4 million in cash, the company has the capacity to continue to prioritise growth over profitability.

We enjoyed seeing The RealReal’s strong user growth this quarter. That feature of these results really stood out as a positive. On the other hand, user growth didn't not translate to revenue growth and the company missed analysts' expectations this quarter and it was unfortunate to see that the revenue guidance for the next quarter also missed expectations. Overall, this quarter's results could have been better. The company is down 8.57% on the results and currently trades at $1.12 per share.

The RealReal may have had a bad quarter, but investors should also consider its valuation and business qualities, when assessing the investment opportunity. Although The RealReal is not a bad business, it probably wouldn't be one of our picks. Its revenue growth has been good, though we don't expect it to maintain historical growth rates. But while its user acquisition efficiency is best in class, the downside is that its EBITDA margins indicate low profitability of its core business when compared to other consumer internet businesses and its cash burn raises the question of whether it can sustainably maintain its growth.

The RealReal's price/gross profit ratio based on the next twelve months is 0.3x. In the end, beauty is in the eye of the beholder. While The RealReal wouldn't be our first pick, if you like the business, the shares are trading at a pretty interesting price point right now.