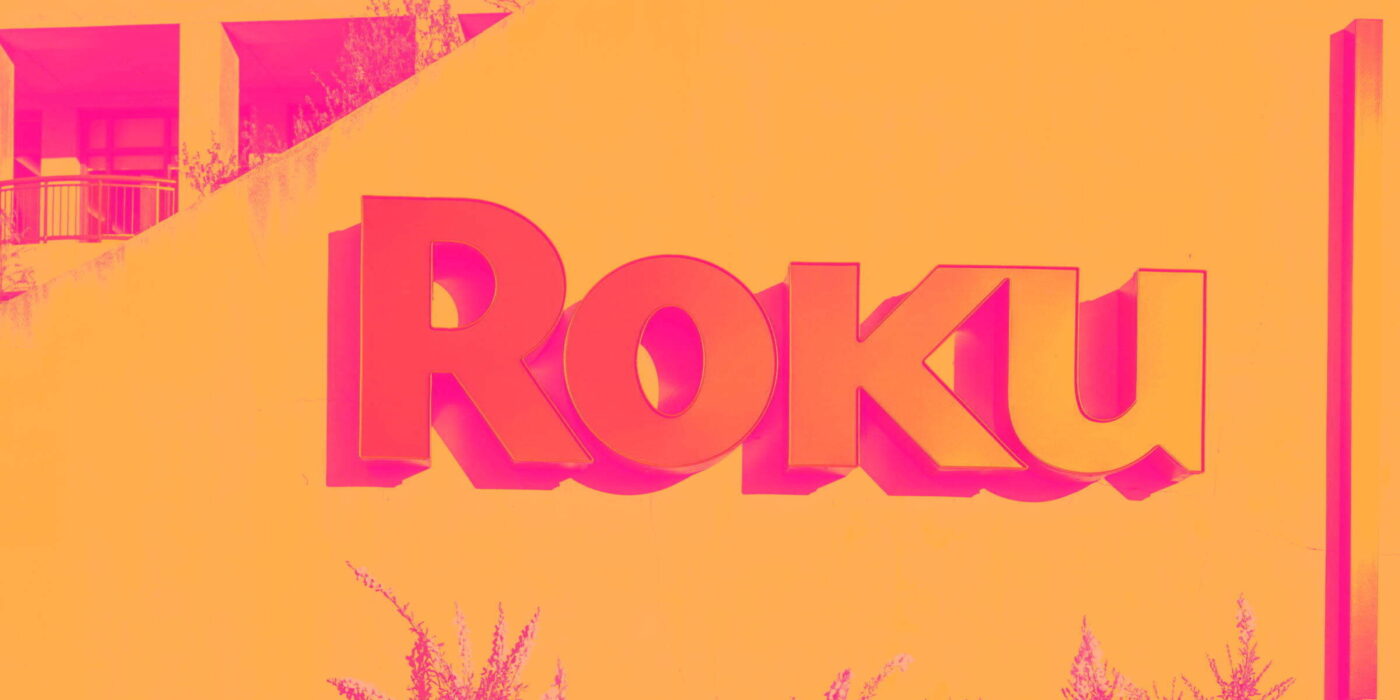 Streaming TV platform Roku (NASDAQ: ROKU) beat analyst expectations in Q1 FY2022 quarter, with revenue up 27.7% year on year to $733.6 million. However, guidance for the next quarter was less impressive, coming in at $805 million at the midpoint, being 2.2% below analyst estimates. Roku made a GAAP loss of $26.3 million, down on its profit of $76.2 million, in the same quarter last year.

Roku was originally founded by Anthony Wood in 2002 – the name Roku means six in Japanese – it was Wood’s sixth company he founded. He would eventually go to work at Netflix tasked with developing a Netflix branded streaming player. Days before launch, Netflix decided it couldn’t release its own hardware player that would put it into competition with other hardware distribution partners like Sony or Samsung, so instead it spun Roku out.

Roku’s streaming content operating system runs on either Roku TV models or as the OS on a range of smart TV models. The company owns and operates the Roku channel, a collection of content offered for free. Its business is built on scaling the number of active accounts to grow the number of hours of viewing throughout its ecosystem, and then monetize through a combination of advertising and commissions from sales of subscription services.

The Roku ecosystem offers benefits to each of its stakeholders, ranging from consumers, content publishers, advertisers, Roku TV brand partners, and other partners. Consumers can discover and access a wide variety of streaming content, content publishers have access to a large base of over 50 million customers, while advertisers can leverage Roku’s data to serve targeted and measurable ads to TV viewers who increasingly don’t watch TV through traditional channels.

Consumers today expect goods and services to be hyper-personalized and on demand. Whether it be what music they listen to or what movie they watch, or finding a date, online consumer businesses today are expected to delight their customers with simple user interfaces that magically fulfill demand. Subscription models have increased usage and stickiness of many online consumer services.

Roku's revenue growth over the last three years has been exceptional, averaging 54.9% annually. Roku may have benefited slightly from the initial impact of the pandemic bringing forward some sales, but growth rates have normalized since then. 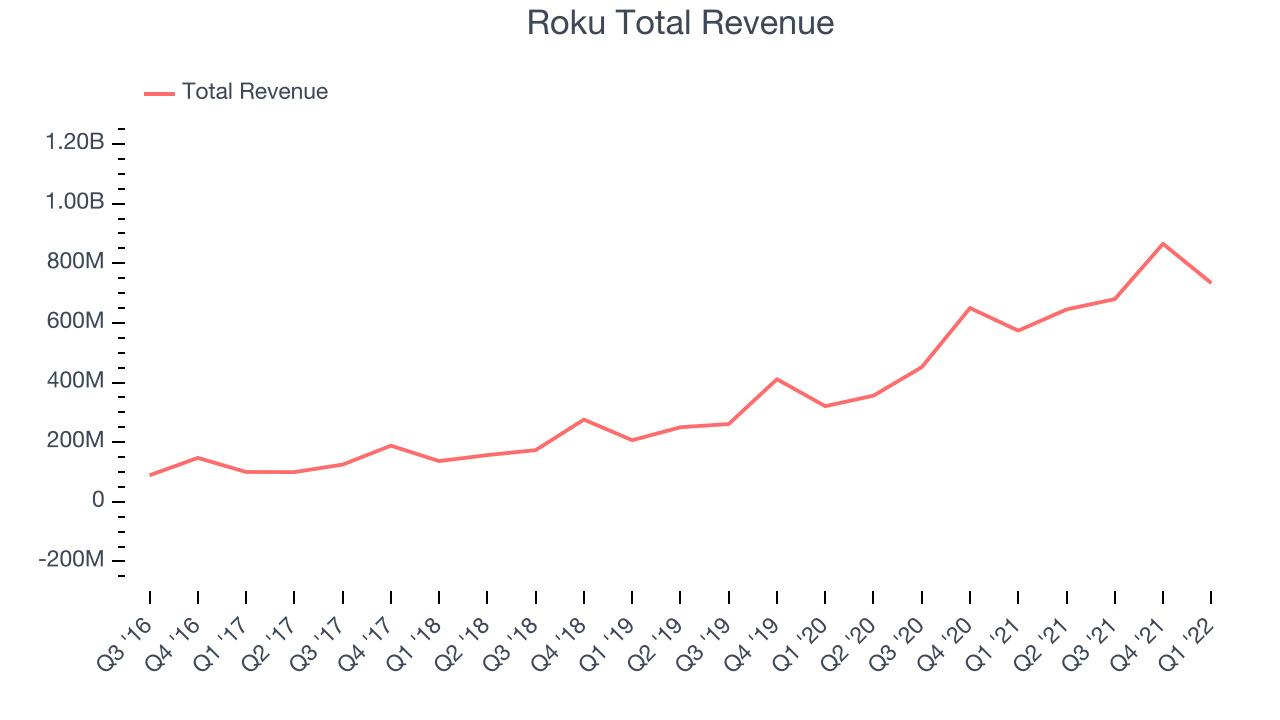 Guidance for the next quarter indicates Roku is expecting revenue to grow 24.7% year on year to $805 million, slowing down from the 81.1% year-over-year increase in revenue the company had recorded in the same quarter last year. Ahead of the earnings results the analysts covering the company were estimating sales to grow 34.4% over the next twelve months.

As a subscription app, Roku generates revenue growth by growing both the subscriber numbers, and the total lifetime value of the average subscriber.

Over the last two years the number of Roku's monthly active users, a key usage metric for the company, grew 20.6% annually to 61.3 million users. This is a strong growth for a consumer internet company. 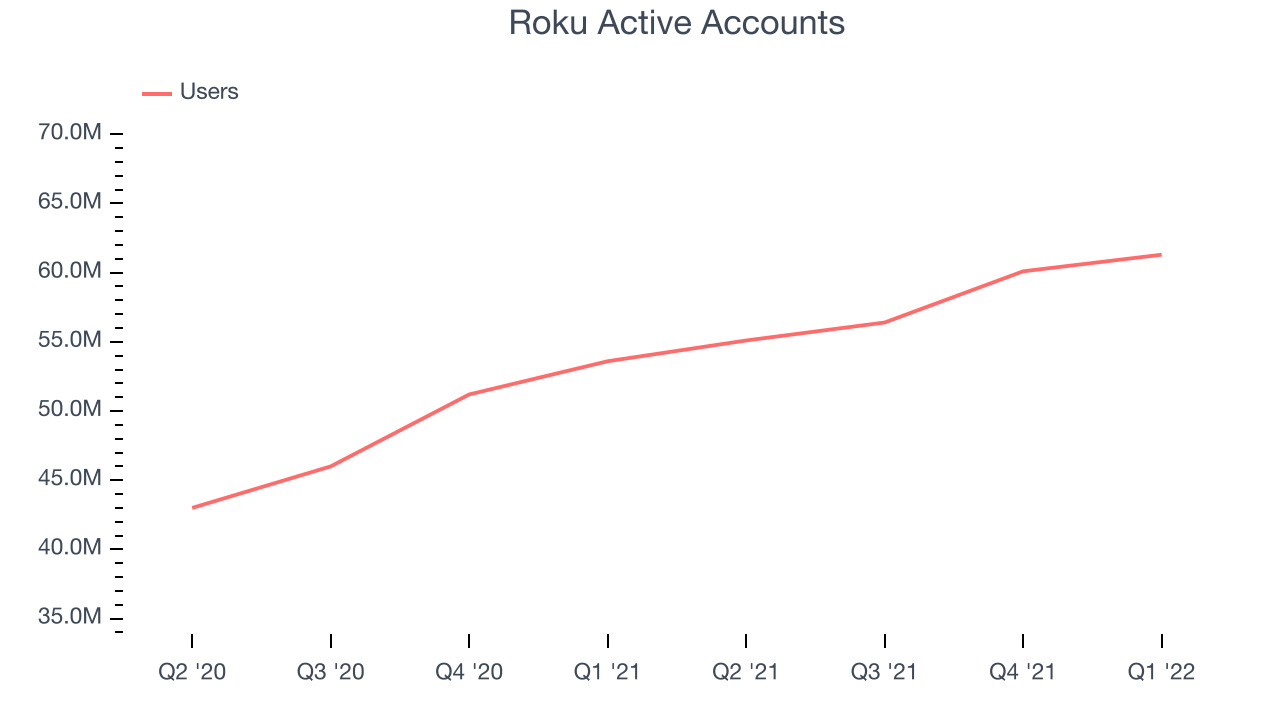 In Q1 the company added 7.7 million monthly active users, translating to a 14.3% growth year on year.

Average revenue per user (ARPU) is a critical metric to track for every consumer internet product and for Roku it measures revenue per each of the monthly active users, a proxy for how valuable its users are. 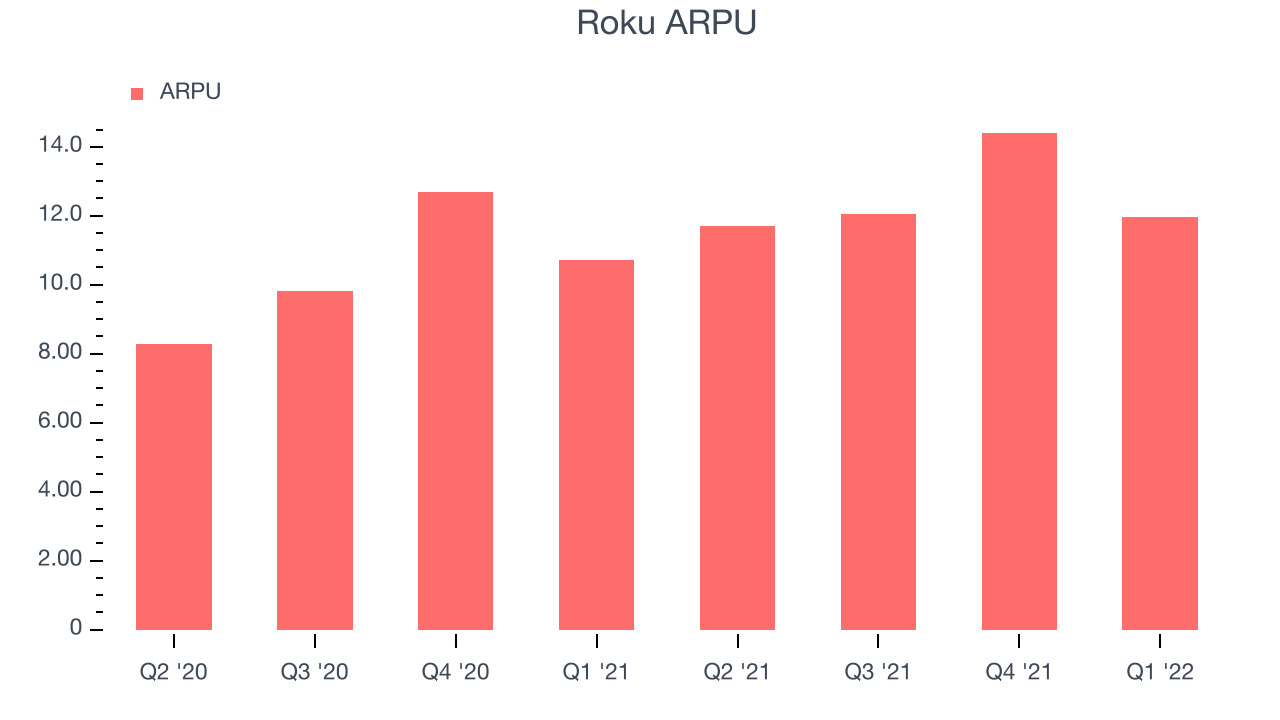 Roku’s ARPU growth has been strong over the last two years, averaging 22.3%. The ability to increase price while still growing its user base reflects the strength of Roku’s platform, as its users continue to spend more than last year. This quarter, ARPU grew 11.7% year on year, reaching $11.96 for each of the monthly active users.

Consumer internet businesses like Roku grow by a combination of product virality, paid advertisement and occasional incentives, unlike enterprise products that are typically sold by sales teams.

Roku is efficient at acquiring new users, spending 35.2% of its gross profit on marketing over the last year. This level of sales and marketing spend efficiency is indicative of a relatively solid competitive positioning, which gives Roku the freedom to invest its resources into new growth initiatives.

Roku reported EBITDA of $57.5 million this quarter, which was a 7.84% margin. Over the last twelve months, the company has exhibited strong profitability with average EBITDA margins of 13.9%. 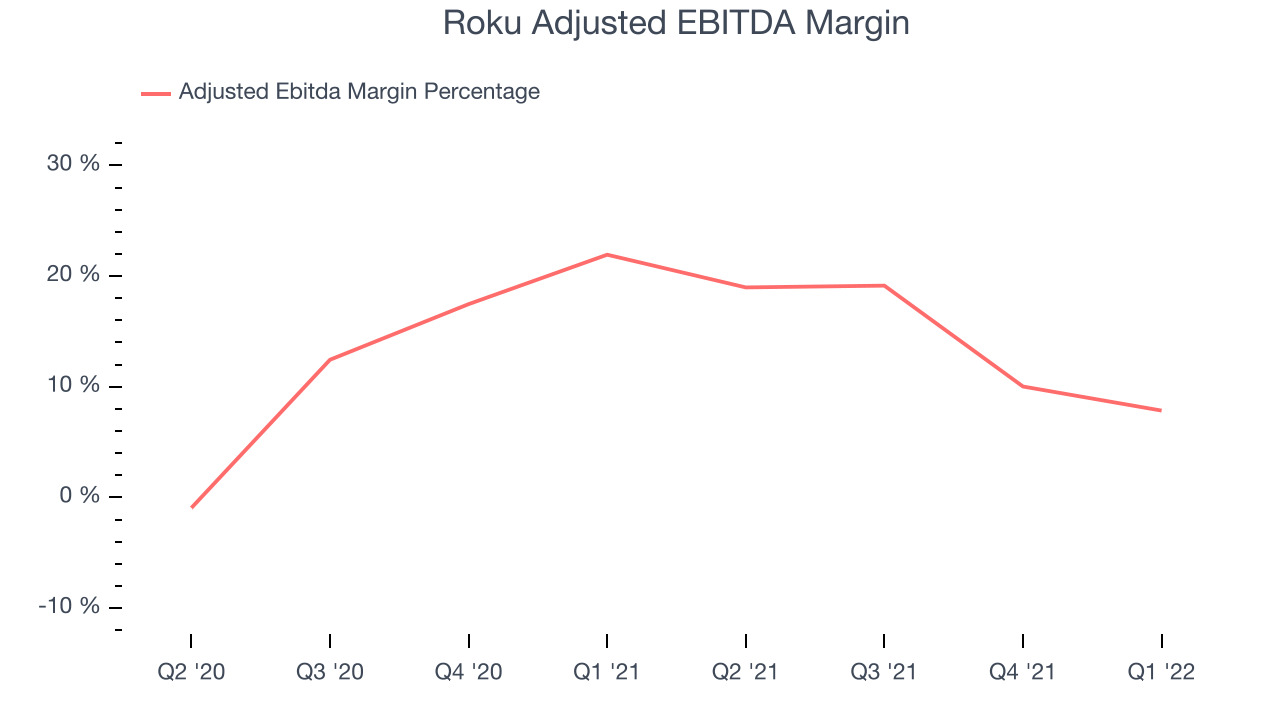 If you follow StockStory for a while, you know that we put an emphasis on cash flow. Why, you ask? We believe that in the end cash is king, as you can't use accounting profits to pay the bills. Roku's free cash flow came in at $87 million in Q1, down 5.48% year on year. 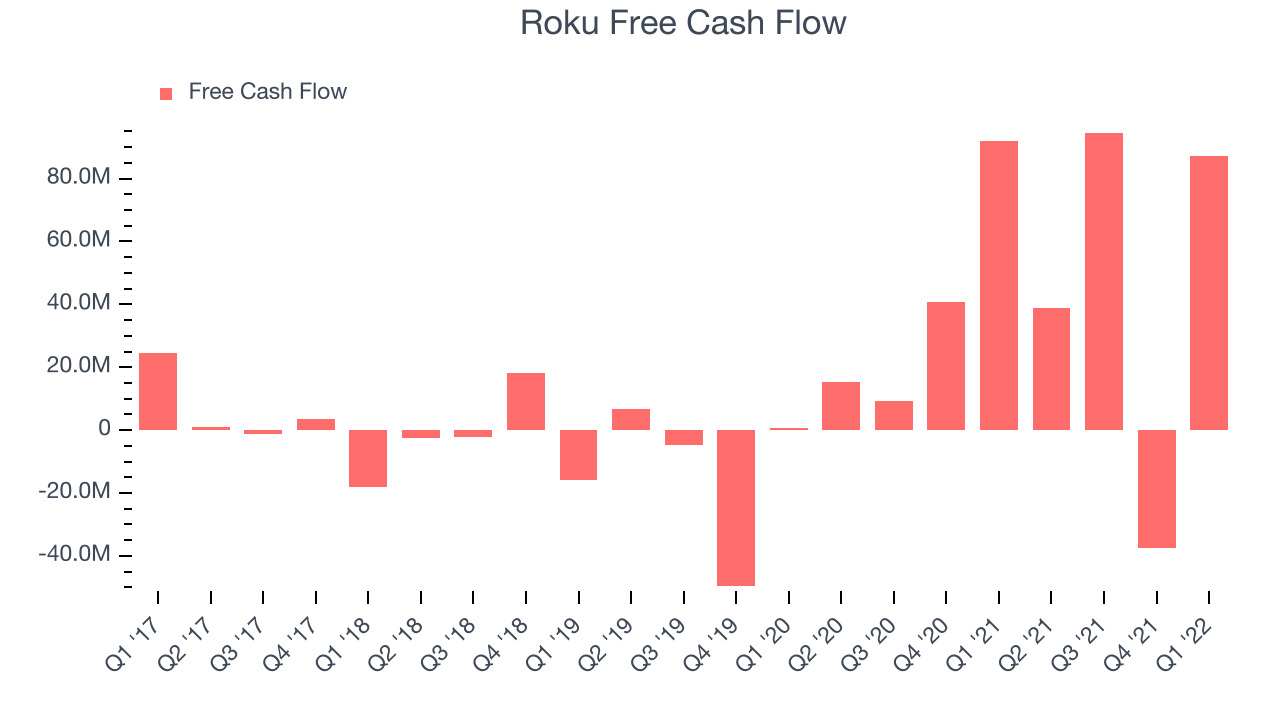 Roku has generated $182.9 million in free cash flow over the last twelve months, a 6.25% of revenues. This FCF margin is a result of Roku asset lite business model, and provides it with the optionality to further invest in the business.

With a market capitalization of $11.5 billion, more than $2.23 billion in cash and with free cash flow over the last twelve months being positive, the company is in a very strong position to invest in growth.

It was great to see that Roku’s user base is growing. And we were also glad to see good revenue growth. On the other hand, it was unfortunate to see that the revenue guidance for the next quarter missed analysts' expectations. Overall, it seems to us that this was a complicated quarter for Roku. The company is up 4.86% on the results and currently trades at $96 per share.

When considering Roku, investors should take into account its valuation and business qualities, as well as what happened in the latest quarter. There are a number of reasons why we think Roku is a great business. First, its revenue growth has been exceptional over the last three years. On top of that, its user growth has been strong, and its EBITDA margins indicate very healthy profitability of its business.

Roku's price/gross profit ratio based on the next twelve months is 6.3x. But looking at the consumer internet landscape today, Roku's qualities stand out and we still like it at this price.

The Wall St analysts covering the company had a one year price target of $309.9 per share right before these results, implying that they saw upside in buying Roku even in the short term.