Cloud infrastructure analytics maker Sumo Logic (SUMO) reported Q1 FY2023 results beating Wall St's expectations, with revenue up 25.1% year on year to $67.8 million. Guidance for the full year was in line with analyst expectations with revenues guided to $290.5 million at the midpoint. Sumo Logic made a GAAP loss of $34.7 million, down on its loss of $26.9 million, in the same quarter last year.

Sumo plugs into their cloud customers’ services and gathers logs about how they are being used, analyses the data and then makes them accessible through collaborative dashboards. It helps their customers reduce downtime by alerting them about performance issues of their applications and mitigates security risks by flagging suspicious traffic and visitor behaviour.

When the founders were starting Sumo Logic, the first investment from the famous VC firm Greylock came so fast they didn’t even have a name for the company yet, and so they chose the name of one of their dogs “Sumo” as a placeholder. As is often the case, it stuck.

The data analytics space is competitive, and it includes companies such as Datadog (NASDAQ:DDOG), Splunk (NASDAQ:SPLK), and Elastic (ESTC).

As you can see below, Sumo Logic's revenue growth has been strong over the last year, growing from quarterly revenue of $54.2 million, to $67.8 million.

This quarter, Sumo Logic's quarterly revenue was once again up a very solid 25.1% year on year. But the growth did slow down compared to last quarter, as the revenue increased by just $806 thousand in Q1, compared to $5.03 million in Q4 2022. We'd like to see revenue increase by a greater amount each quarter, but a one-off fluctuation is usually not concerning.

Guidance for the next quarter indicates Sumo Logic is expecting revenue to grow 21.5% year on year to $71.5 million, improving on the 19% year-over-year increase in revenue the company had recorded in the same quarter last year. Ahead of the earnings results the analysts covering the company were estimating sales to grow 19.2% over the next twelve months.

What makes the software as a service business so attractive is that once the software is developed, it typically shouldn't cost much to provide it as an ongoing service to customers. Sumo Logic's gross profit margin, an important metric measuring how much money there is left after paying for servers, licenses, technical support and other necessary running expenses was at 64.4% in Q1. 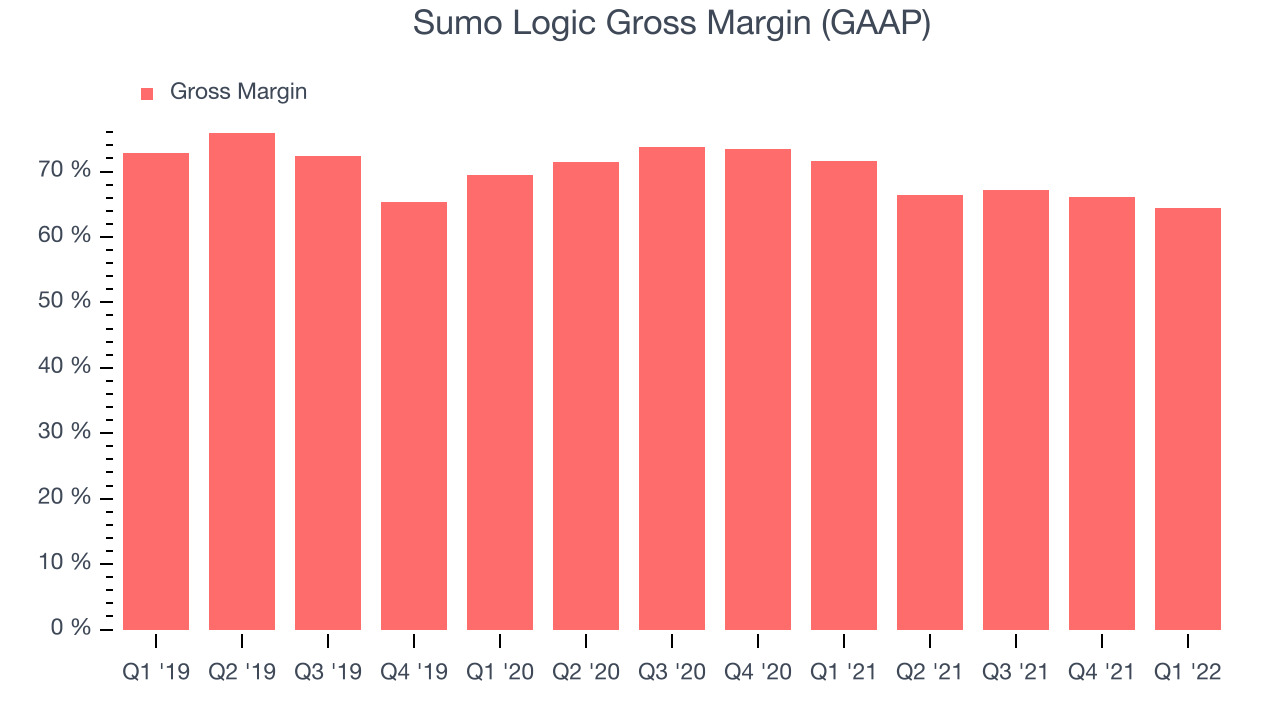 That means that for every $1 in revenue the company had $0.64 left to spend on developing new products, marketing & sales and the general administrative overhead. This would be considered a low gross margin for a SaaS company and it has been going down over the last year, which is probably the opposite direction shareholders would like to see it go.

If you follow StockStory for a while, you know that we put an emphasis on cash flow. Why, you ask? We believe that in the end cash is king, as you can't use accounting profits to pay the bills. Sumo Logic burned through $1.99 million in Q1.

Sumo Logic has burned through $31.9 million in cash over the last twelve months, a negative 12.4% free cash flow margin. This low FCF margin is a result of Sumo Logic's need to still heavily invest in the business.

Since it has still been burning cash over the last twelve months it is worth keeping an eye on Sumo Logic’s balance sheet, but we note that with a market capitalization of $860.2 million and more than $308.1 million in cash, the company has the capacity to continue to prioritise growth over profitability.

It was good to see Sumo Logic outperform Wall St’s revenue expectations this quarter. And we were also glad that the revenue guidance for the next quarter exceeded analysts' expectations. On the other hand, there was a deterioration in gross margin. Zooming out, we think this was still a decent, albeit mixed, quarter, showing the company is staying on target. The company is up 6.49% on the results and currently trades at $8.2 per share.

When considering Sumo Logic, investors should take into account its valuation and business qualities, as well as what happened in the latest quarter. We cheer for everyone who is making the lives of others easier through technology, but in case of Sumo Logic we will be cheering from the sidelines. Its revenue growth has been solid. Unfortunately, its customer acquisition is less efficient than many comparable companies, and its gross margins show its business model is much less lucrative than the best software businesses.

Sumo Logic's price to sales ratio based on the next twelve months is 2.9x, suggesting that the market does have lower expectations of the business, relative to the high growth tech stocks. While we have no doubt one can find things to like about the company, and the price is not completely unreasonable, we think that at the moment there might be better opportunities in the market.