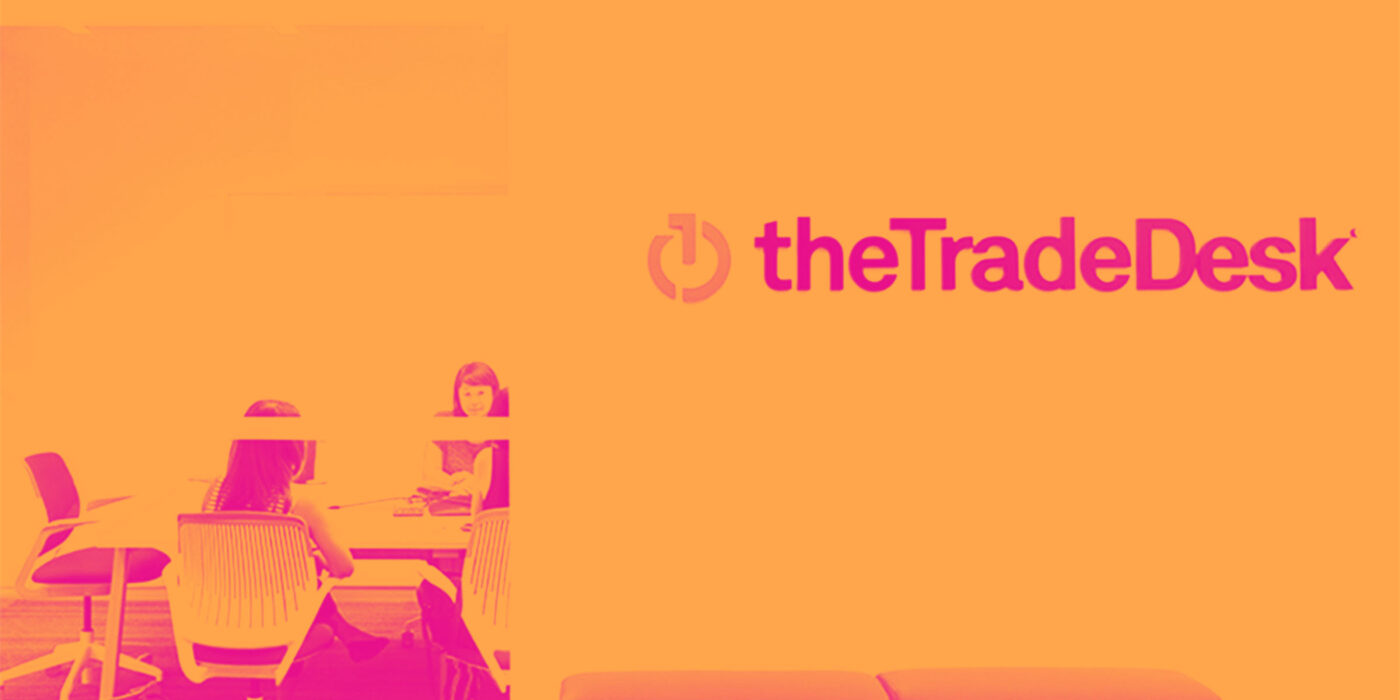 Firing on All Cylinders: The Trade Desk (NASDAQ:TTD) Q4 Earnings Lead the Way

As advertising software stocks’ Q4 earnings season wraps, let's dig into this quarters’ best and worst performers, including The Trade Desk (NASDAQ:TTD) and its peers.

The 5 advertising software stocks we track reported a mixed Q4; on average, revenues beat analyst consensus estimates by 1.89%, while on average next quarter revenue guidance was 0.38% above consensus. Technology stocks have been hit hard on fears of higher interest rates and while some of the advertising software stocks have fared somewhat better, they have not been spared, with share price declining 12.2% since earnings, on average.

The Trade Desk reported revenues of $395.5 million, up 23.6% year on year, beating analyst expectations by 1.52%. It was a strong quarter for the company, with a very optimistic guidance for the next quarter and a decent beat of analyst estimates.

“2021 was a remarkable year for The Trade Desk capped off by record performance in the fourth quarter. The launch of Solimar, our most important new platform to date, along with major progress in areas such as CTV, identity and retail data, enabled us to gain more share of the data-driven advertising market. As a result, we generated nearly $6.2 billion of total spend on our platform, nearly $1.2 billion in revenue and over $500 million in adjusted EBITDA in 2021 as we continue to scale the business with profitable growth. We exceeded our objectives for 2021 and I could not be more excited about the momentum we’re carrying into the first quarter and the year ahead,” said Jeff Green, founder and CEO of The Trade Desk.

Read why we think that The Trade Desk is one of the best advertising software stocks, our full report is free.

When Oren Netzer saw a digital ad for US-based Target while sitting in his Tel Aviv apartment, he knew there was an unsolved problem, so he started DoubleVerify (NYSE: DV), a provider of advertising solutions to businesses that helps with ad verification, fraud prevention, and brand safety.

DoubleVerify reported revenues of $105.5 million, up 34.1% year on year, beating analyst expectations by 4.54%. It was a solid quarter for the company, with a strong top line growth and a decent beat of analyst estimates.

DoubleVerify delivered the strongest analyst estimates beat and highest full year guidance raise among its peers. The stock is up 2.66% since the results and currently trades at $24.31.

Is now the time to buy DoubleVerify? Access our full analysis of the earnings results here, it's free.

PubMatic reported revenues of $75.5 million, up 34.3% year on year, in line with analyst expectations. It was a weaker quarter for the company, with a decline in gross margin compared to the previous year and revenue guidance for the next quarter below analysts' estimates.

PubMatic had the weakest performance against analyst estimates in the group. The stock is down 15.2% since the results and currently trades at $25.94.

Co-founded by Adam Foroughi who was frustrated with not being able to find a good solution to market his own dating app, AppLovin (NASDAQ:APP) is a provider of marketing and monetization tools for mobile app developers and also operates a portfolio of mobile games.

AppLovin reported revenues of $793.4 million, up 55.6% year on year, beating analyst expectations by 2.2%. It was a mixed quarter for the company, with strong top line growth but full-year revenue guidance missing analysts' expectations.

AppLovin pulled off the fastest revenue growth but had the weakest full year guidance update among the peers. The stock is down 20.3% since the results and currently trades at $54.80.

Read our full, actionable report on AppLovin here, it's free.

Started in 2011 as a spin-out of RapLeaf, LiveRamp (NYSE:RAMP) provides software as a service that helps companies better target their marketing by merging offline and online data about their customers.

LiveRamp reported revenues of $140.6 million, up 17.4% year on year, beating analyst expectations by 1.08%. It was a mixed quarter for the company, with accelerating customer growth but an underwhelming revenue guidance for the next quarter.

LiveRamp had the slowest revenue growth among the peers. The company added 6 enterprise customers paying more than $1m annually to a total of 86. The stock is down 13.7% since the results and currently trades at $38.31.

Read our full, actionable report on LiveRamp here, it's free.