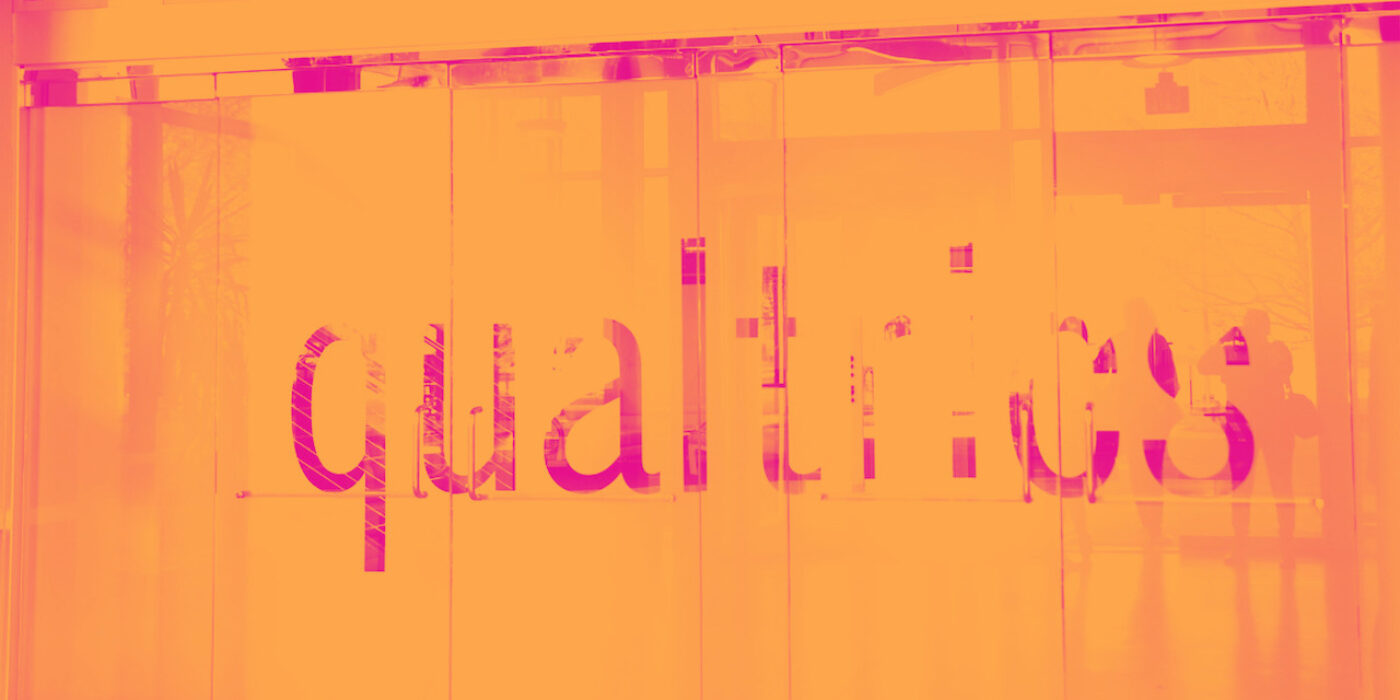 Online survey software provider Qualtrics (NASDAQ:XM) reported results ahead of analyst expectations in the Q1 FY2022 quarter, with revenue up 40.6% year on year to $335.6 million. Guidance for next quarter's revenue was $345 million at the midpoint, 2.2% above the average of analyst estimates. Qualtrics made a GAAP loss of $292.3 million, down on its loss of $199.8 million, in the same quarter last year.

Data is commonly stored in silos across the organization, making it difficult to generate efficient insights from the feedback received from customers, employees, and partners. Qualtrics makes it easy and efficient to extract and unify the data to generate actionable business insights.

For example, when JetBlue observed a spike in negative feedback and reduced customer satisfaction at one of their airport terminals, they investigated the issue and found the terminal speaker was broken and passengers couldn’t hear what the gate agent was saying. With Qualtrics, JetBlue was able to send an automated alert to the airport maintenance crew and the issue was fixed the same day.

The software platform was originally designed for academic researchers. This has led to its widespread adoption in universities around the world, an important factor that has contributed to its success to date. Qualtrics has since evolved its software for the business world, which is increasingly flooded with data.

The Internet has given customers more choice on whom to conduct business with and has also given them the power to easily share their experiences with other customers. These twin dynamics effectively have increased pressure on companies to both improve their customer service and also monitor their brand reputation online, driving the need for customer experience software offerings.

As you can see below, Qualtrics's revenue growth has been impressive over the last year, growing from quarterly revenue of $238.6 million, to $335.6 million. 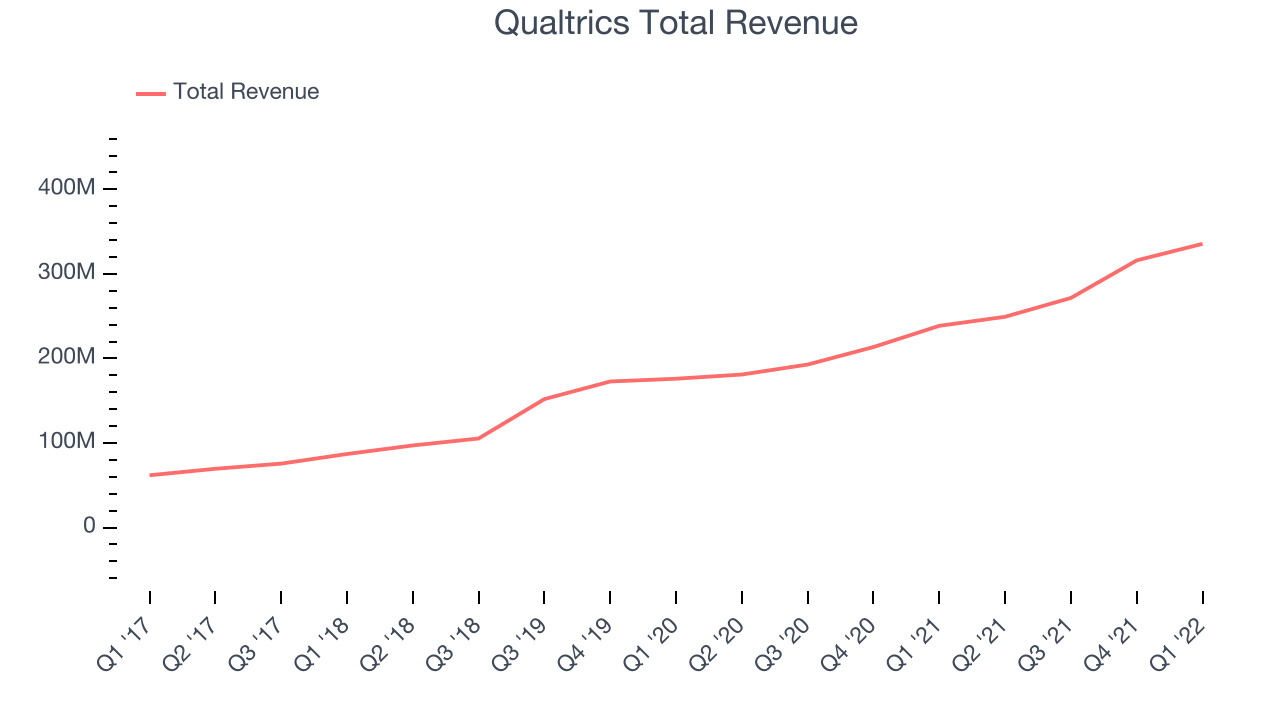 Guidance for the next quarter indicates Qualtrics is expecting revenue to grow 38.3% year on year to $345 million, in line with the 37.7% year-over-year increase in revenue the company had recorded in the same quarter last year. Ahead of the earnings results the analysts covering the company were estimating sales to grow 26.9% over the next twelve months.

What makes the software as a service business so attractive is that once the software is developed, it typically shouldn't cost much to provide it as an ongoing service to customers. Qualtrics's gross profit margin, an important metric measuring how much money there is left after paying for servers, licenses, technical support and other necessary running expenses was at 70.4% in Q1. 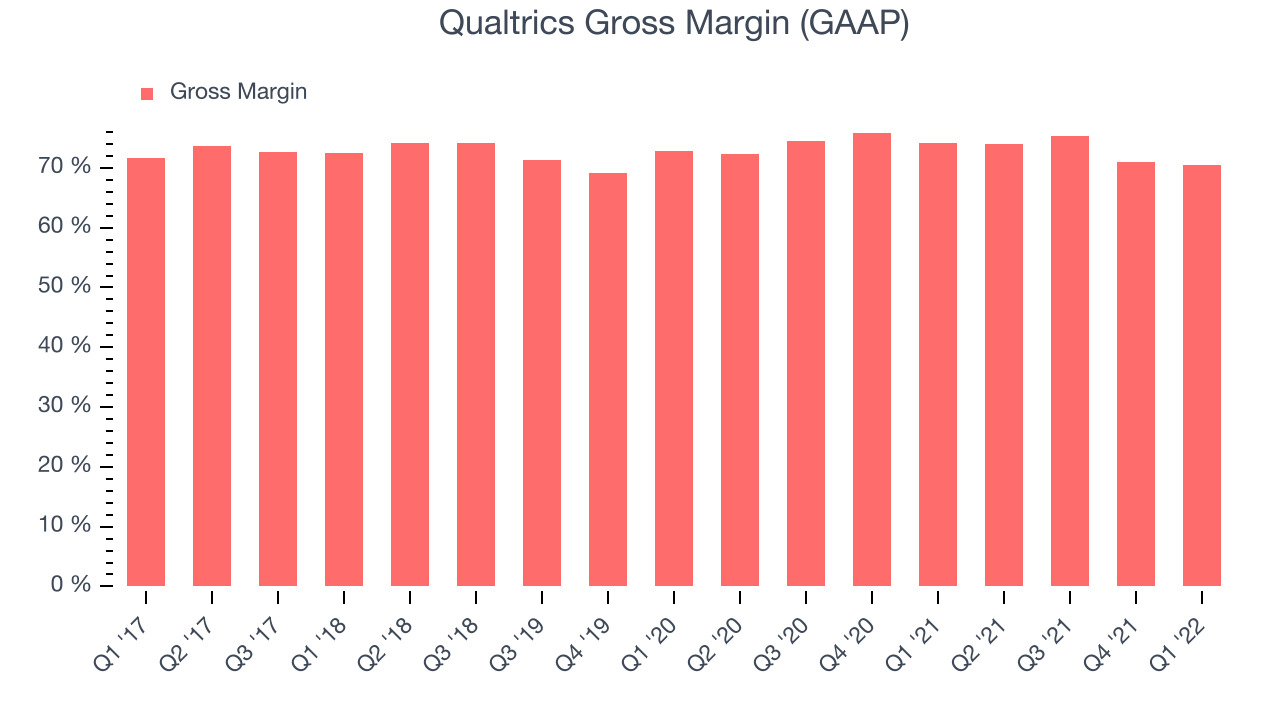 That means that for every $1 in revenue the company had $0.70 left to spend on developing new products, marketing & sales and the general administrative overhead. Despite it going down over the last year, this is still around the lower average of what we typically see in SaaS businesses. Gross margin has a major impact on a company’s ability to invest in developing new products and sales & marketing, which may ultimately determine the winner in a competitive market so it is important to track.

If you follow StockStory for a while, you know that we put an emphasis on cash flow. Why, you ask? We believe that in the end cash is king, as you can't use accounting profits to pay the bills. Qualtrics's free cash flow came in at $9.93 million in Q1, turning positive year on year. 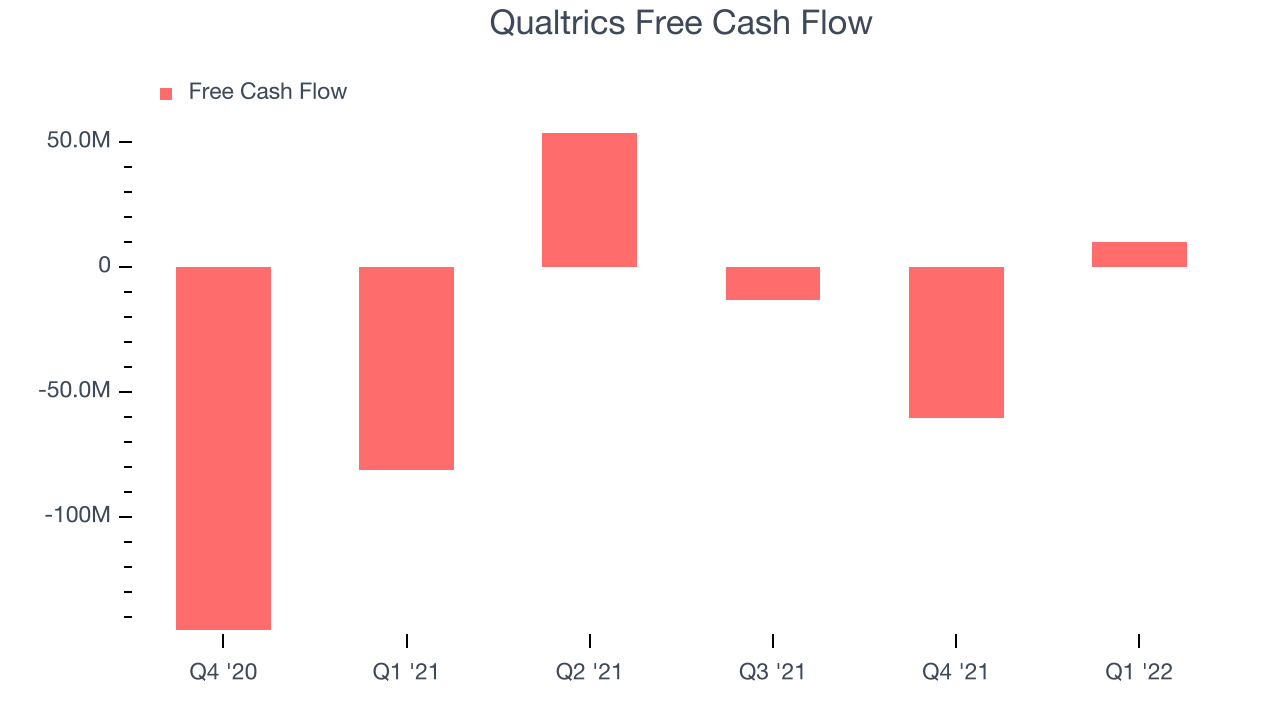 Qualtrics has burned through $9.85 million in cash over the last twelve months, resulting in a negative 0.84% free cash flow margin. This below average FCF margin is a result of Qualtrics's need to invest in the business to continue penetrating its market.

With a market capitalization of $14.8 billion, more than $836.4 million in cash and the fact it is operating close to free cash flow break-even, we're confident that Qualtrics has the resources it needs to pursue a high growth business strategy.

We enjoyed seeing Qualtrics’s impressive revenue growth this quarter. And we were also glad that the revenue guidance for the next quarter exceeded analysts' expectations. Overall, we think this was a strong quarter, that should leave shareholders feeling very positive. The company is up 4.31% on the results and currently trades at $25.4 per share.

Qualtrics may have had a good quarter, but investors should also consider its valuation and business qualities, when assessing the investment opportunity. Although Qualtrics is not a bad business, it probably wouldn't be one of our picks. Its revenue growth has been impressive, though we don't expect it to maintain historical growth rates. Unfortunately, its customer acquisition is less efficient than many comparable companies.

Qualtrics's price to sales ratio based on the next twelve months is 9.5x, suggesting that the market has lower expectations of the business, relative to the high growth tech stocks. We don't really see a big opportunity in the stock at the moment, but in the end beauty is in the eye of the beholder. And if you like the company, it seems that Qualtrics doesn't trade at a completely unreasonable price point.