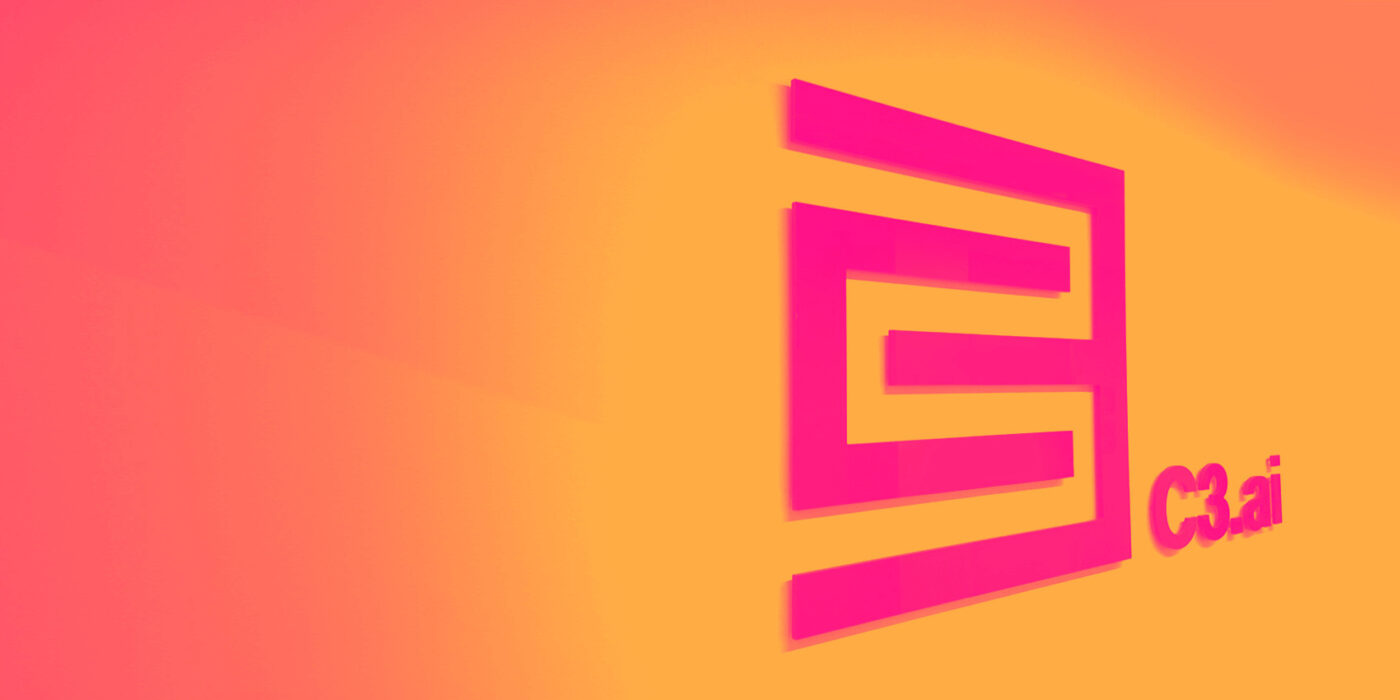 Artificial intelligence (AI) software company C3.ai (NYSE:AI) reported Q2 FY2023 results topping analyst expectations, with revenue up 7.11% year on year to $62.4 million. Guidance for the full year also exceeded estimates, however the guidance for the next quarter was less impressive, coming in at $64 million, 4.22% below analyst estimates. C3.ai made a GAAP loss of $68.8 million, down on its loss of $56.7 million, in the same quarter last year.

Founded in 2009 by enterprise software veteran Tom Seibel, C3.ai (NYSE:AI) provides software that makes it easy for organizations to add artificial intelligence technology to their applications.

Building a functional AI-powered application from scratch is a really complex and time consuming technical problem, even for a large company. A dysfunctional AI-based software can be at best useless, but at worst can be actually damaging to the company, for example resulting in a false clinical diagnosis or a failure to detect complications in an energy plant.

C3.AI’s software development platform includes features to build AI applications with little or no code and it also provides pre-built AI applications and models tailored to a wide range of industries that can be automatically installed and deployed.

To drive the adoption of its software, C3.AI provides a place for organizations to connect their data so that AI technology can be applied and it also integrates with sales and marketing systems such as CRM to generate more meaningful feedback.

The company was initially called C3 Energy to focus on analyzing electricity flow from plants to homes and has since expanded its scope by developing solutions to address problems in other industries such as predictive maintenance, fraud detection, and network optimization.

This expanding market opportunity is attracting competition from the likes of Palantir (NYSE:PLTR), IBM (NYSE:IBM) and a number of growing startups.

C3.ai's quarterly revenue was only up 7.11% year on year, which might disappoint some shareholders. But the revenue actually decreased again in Q2 by $2.9 million, compared to $7 million decrease in Q1 2023. While one-off fluctuations don't always have to be concerning, we have no doubt that shareholders would like to see the revenue rebound soon.

C3.ai is guiding for revenue to decline next quarter 8.27% year on year to $64 million, a significant deceleration on the 42% year-over-year increase in revenue the company had recorded in the same quarter last year. Ahead of the earnings results the analysts covering the company were estimating sales to grow 5.23% over the next twelve months.

What makes the software as a service business so attractive is that once the software is developed, it typically shouldn't cost much to provide it as an ongoing service to customers. C3.ai's gross profit margin, an important metric measuring how much money there is left after paying for servers, licenses, technical support and other necessary running expenses was at 66.7% in Q2. 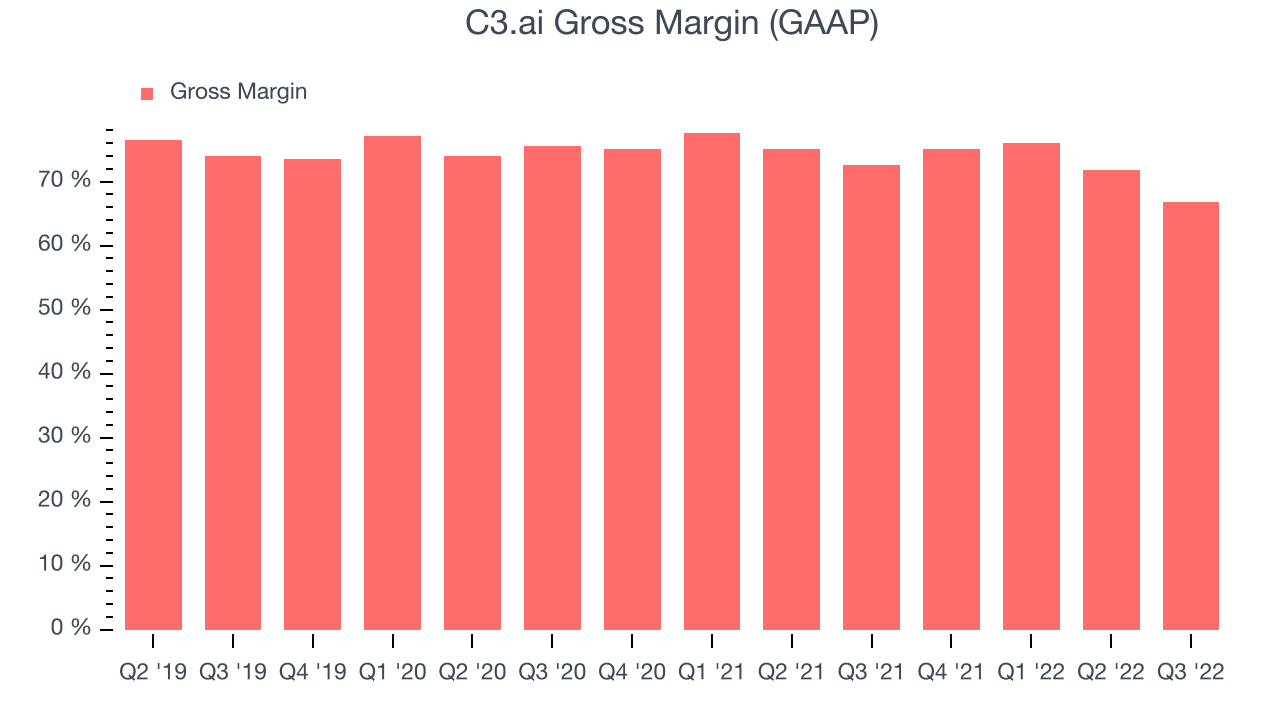 If you have followed StockStory for a while, you know that we put an emphasis on cash flow. Why, you ask? We believe that in the end cash is king, as you can't use accounting profits to pay the bills. C3.ai burned through $77 million in Q2, increasing the cash burn by 288% year on year. 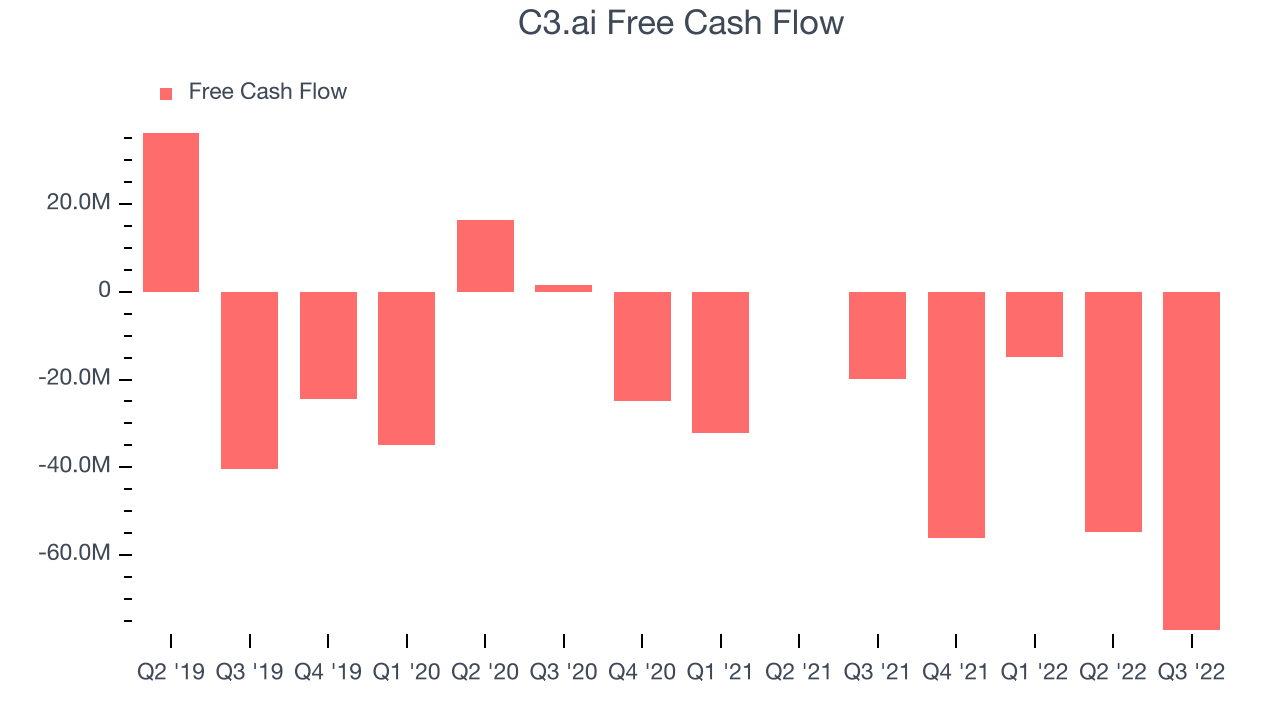 C3.ai has burned through $202.7 million in cash over the last twelve months, a negative 75.1% free cash flow margin. This low FCF margin is a result of C3.ai's need to still heavily invest in the business.

Since it has still been burning cash over the last twelve months it is worth keeping an eye on C3.ai’s balance sheet, but we note that with a market capitalization of $1.3 billion and more than $840 million in cash, the company has the capacity to continue to prioritise growth over profitability.

It was good to see C3.ai outperform Wall St’s revenue expectations this quarter. That feature of these results really stood out as a positive. On the other hand, it was unfortunate to see that the revenue guidance for the next quarter missed analysts' expectations and gross margin deteriorated. Overall, this quarter's results were not the best we've seen from C3.ai. The company currently trades at $13.56 per share.

When considering C3.ai, investors should take into account its valuation and business qualities, as well as what happened in the latest quarter. We cheer for everyone who is making the lives of others easier through technology, but in case of C3.ai we will be cheering from the sidelines. Its revenue growth has been solid, though we don't expect it to maintain historical growth rates. But while its very efficient customer acquisition hints at the potential for strong profitability, unfortunately its growth is coming at a cost of significant cash burn.

C3.ai's price to sales ratio based on the next twelve months is 4.6x, suggesting that the market does have lower expectations of the business, relative to the high growth tech stocks. While we have no doubt one can find things to like about the company, we think there might be better opportunities in the market and at the moment don't see many reasons to get involved.