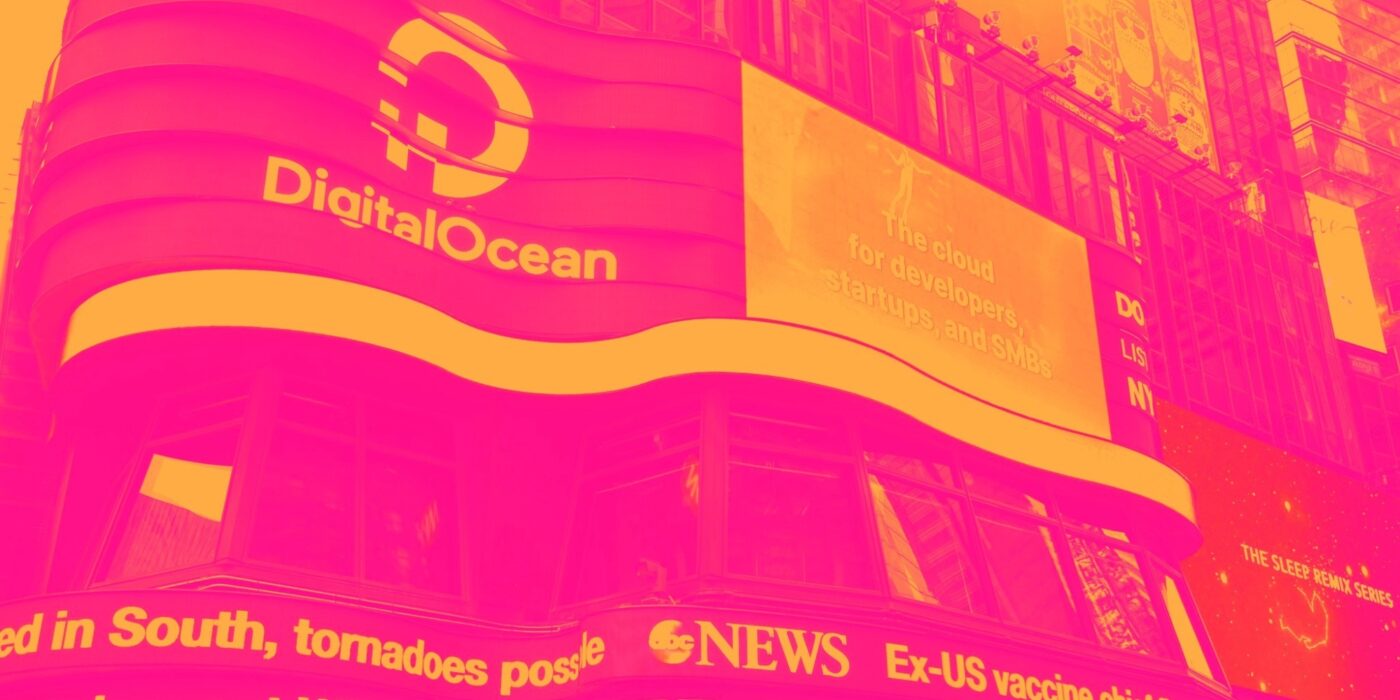 Cloud computing provider DigitalOcean (NYSE: DOCN) fell short of analyst expectations in Q2 FY2022 quarter, with revenue up 28.9% year on year to $133.8 million. Guidance for the next quarter also missed analyst expectations with revenues guided to $146.2 million at the midpoint, or 0.37% below analyst estimates. DigitalOcean made a GAAP loss of $6.19 million, down on its loss of $2.18 million, in the same quarter last year.

DigitalOcean offers a range of cloud computing options for developers and small businesses. Hyperscalers Amazon Web Services, Microsoft Azure, and Google Cloud Platform are the dominant providers of the cloud infrastructure that has become the standard for companies today.

For individual developers and small and medium businesses, the large cloud platforms present some hurdles to adoption: the actual onboarding and implementation processes can be difficult, pricing models can be complex and at times unpredictable, and there is a relatively low level of support for SMBs, as the cloud giants are focused on serving enterprise customers.

DigitalOcean focuses mainly on less application and website hosting use cases and differentiates itself from the hyperscale platforms through the intuitive simplicity of its user interface, which allows customers to spin up “Droplets” (their term for a virtual machine) in under a minute. The company offers a high level of live-person customer support regardless of spend levels, and utilizes open source software to keep costs low. For context, DigitalOcean’s bandwidth prices are a fraction of its hyperscale rivals.

Digital Ocean’s main competitors are the hyperscale cloud providers: Amazon (NASDAQ:AMZN), Microsoft (NASDAQ: MSFT), and Alphabet’s Google Cloud Platform (NASDAQ: GOOGL). IBM (NYSE:IBM) and Oracle (NYSE:ORCL) round out the larger players. A second set of rivals are niche cloud providers that target certain verticals or geographies such as OVH, Vultr, Linode, and Heroku, which is owned by Salesforce.com (NYSE:CRM).

As you can see below, DigitalOcean's revenue growth has been very strong over the last year, growing from quarterly revenue of $103.8 million, to $133.8 million. 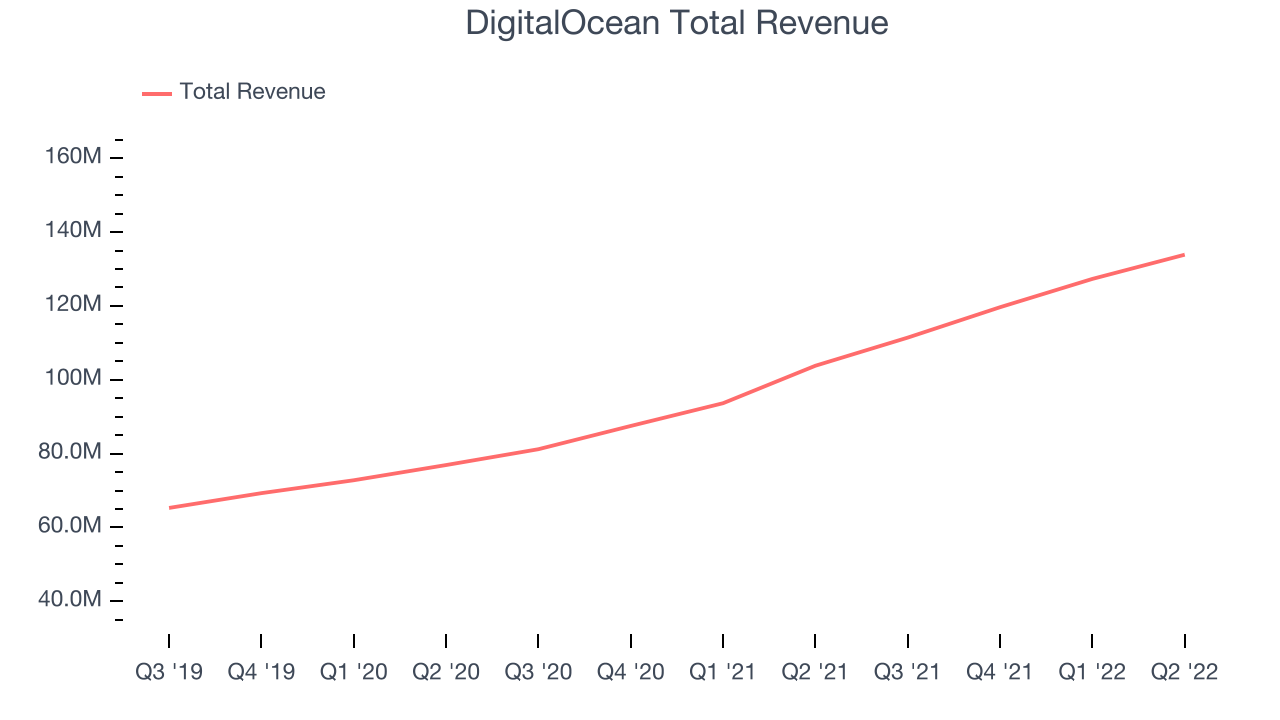 Even though DigitalOcean fell short of revenue estimates, its quarterly revenue growth was still up a very solid 28.9% year on year. But the growth did slow down a little compared to last quarter, as DigitalOcean increased revenue by $6.55 million in Q2, compared to $7.66 million revenue add in Q1 2022. We'd like to see revenue increase by a greater amount each quarter, but a one-off fluctuation is usually not concerning.

Guidance for the next quarter indicates DigitalOcean is expecting revenue to grow 31.2% year on year to $146.2 million, slowing down from the 37.2% year-over-year increase in revenue the company had recorded in the same quarter last year. Ahead of the earnings results the analysts covering the company were estimating sales to grow 32.1% over the next twelve months. 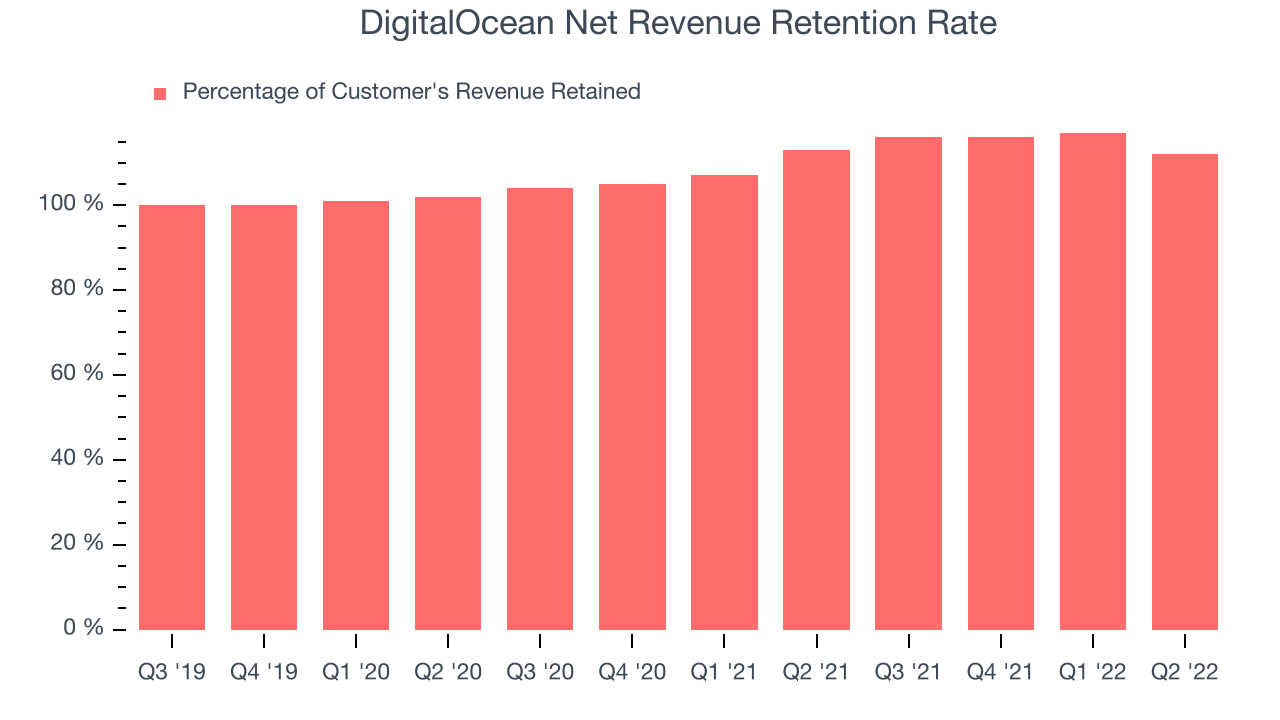 DigitalOcean's net revenue retention rate, an important measure of how much customers from a year ago were spending at the end of the quarter, was at 112% in Q2. That means even if they didn't win any new customers, DigitalOcean would have grown its revenue 12% year on year. Despite the recent drop this is still a good retention rate and a proof that DigitalOcean's customers are satisfied with their software and are getting more value from it over time. That is good to see.

What makes the software as a service business so attractive is that once the software is developed, it typically shouldn't cost much to provide it as an ongoing service to customers. DigitalOcean's gross profit margin, an important metric measuring how much money there is left after paying for servers, licenses, technical support and other necessary running expenses was at 64.7% in Q2. 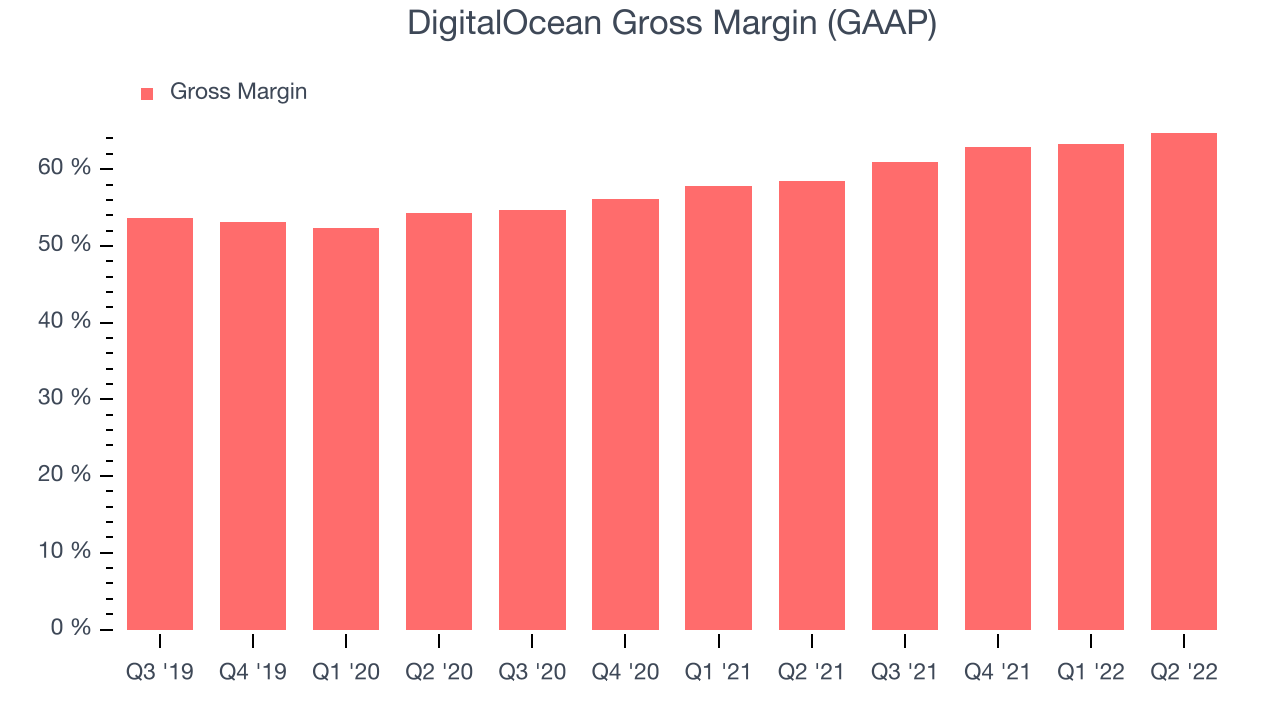 That means that for every $1 in revenue the company had $0.64 left to spend on developing new products, marketing & sales and the general administrative overhead. While it improved significantly from the previous quarter this would still be considered a low gross margin for a SaaS company and we would like to see the improvements continue.

If you follow StockStory for a while, you know that we put an emphasis on cash flow. Why, you ask? We believe that in the end cash is king, as you can't use accounting profits to pay the bills. DigitalOcean's free cash flow came in at $18.2 million in Q2, up 39.7% year on year.

DigitalOcean has generated $42.4 million in free cash flow over the last twelve months, a decent 8.62% of revenues. This FCF margin is a result of DigitalOcean asset lite business model, and provides it with optionality and decent amount of cash to invest in the business.

With a market capitalization of $4.67 billion DigitalOcean is among smaller companies, but its more than $1.16 billion in cash and positive free cash flow over the last twelve months give us confidence that DigitalOcean has the resources it needs to pursue a high growth business strategy.

It was good to see DigitalOcean improve their gross margin this quarter. And we were also glad to see good revenue growth. On the other hand, it was less good to see the deterioration in revenue retention rate and it missed analysts' revenue expectations. Overall, it seems to us that this was a complicated quarter for DigitalOcean. The company is down 2.42% on the results and currently trades at $46.7 per share.

DigitalOcean may have had a bad quarter, but investors should also consider its valuation and business qualities, when assessing the investment opportunity. We think DigitalOcean is a solid business. Its revenue growth has been strong. And while its gross margins show its business model is much less lucrative than the best software businesses, the good news is its very efficient customer acquisition hints at the potential for strong profitability, and its customers spend noticeably more each year, which is great to see.

DigitalOcean's price to sales ratio based on the next twelve months is 7.5x, suggesting that the market is expecting more steady growth, relative to the hottest tech stocks. There are definitely things to like about DigitalOcean and looking at the tech landscape right now, it seems that it doesn't trade at an unreasonable price point.

The Wall St analysts covering the company had a one year price target of $54.3 per share right before these results, implying that they saw upside in buying DigitalOcean even in the short term.