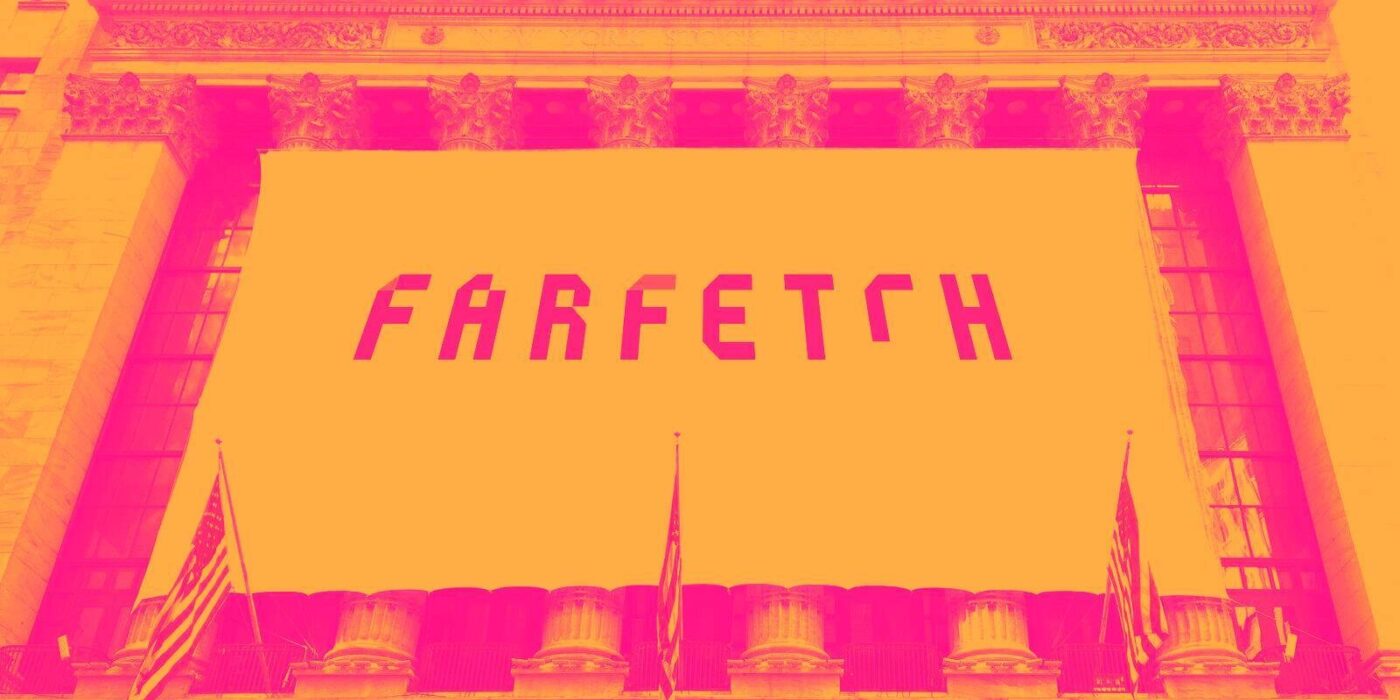 Online luxury marketplace Farfetch (NYSE: FTCH) missed analyst expectations in Q3 FY2022 quarter, with revenue up 1.85% year on year to $593.3 million. Farfetch made a GAAP loss of $274.9 million, down on its profit of $769.1 million, in the same quarter last year.

Farfetch operates a marketplace focused on multi-brand fashion boutiques listing inventory on its marketplace, with Farfetch charging a commission on sales made. Over time, the company has created network effects for its buyers and sellers, while providing a unique value proposition to each. For buyers, Farfetch aggregates a wide inventory of exclusive apparel that is often difficult to locate, while also reducing purchasing friction by offering free returns and localized multi-lingual customer service; an important feature as many are buying from vendors in different countries, notably China, which is Farfetch’s second largest market.

Fashion boutiques generally operate only from a few locations, and have little online presence; Farfetch enabled them access to a much wider audience. This provides dual benefits; it allows them to grow their business but also allows them to prove to their brand partners (e.g. Gucci) that their boutiques should have access to unique inventory. Finally, for the fashion brands themselves, Farfetch is a distribution platform through which to sell direct to consumers, while maintaining control of pricing, an important function in the fashion industry. 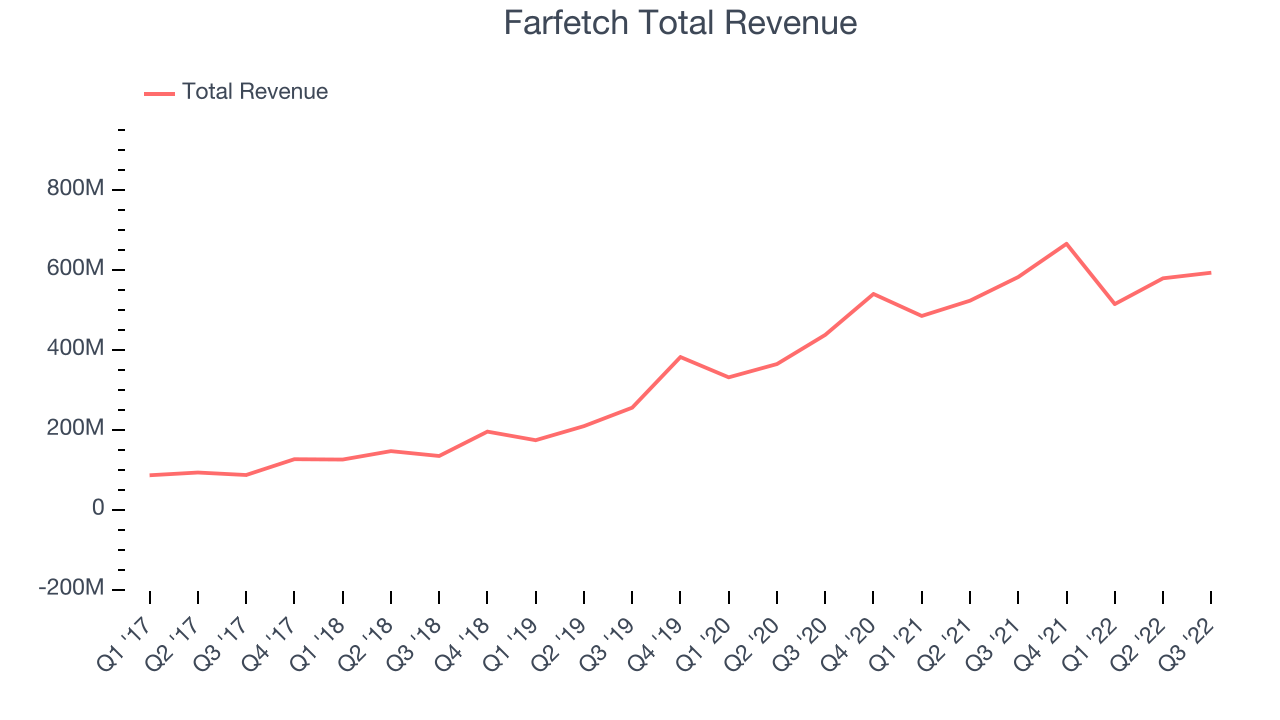 Ahead of the earnings results the analysts covering the company were estimating sales to grow 13.5% over the next twelve months.

As a online marketplace, Farfetch generates revenue growth both by growing the number of buyers using the platform and how much each of those buyers spends.

Over the last two years the number of Farfetch's active buyers, a key usage metric for the company, grew 28% annually to 3.9 million users. This is among the fastest growth of any consumer internet company, indicating that users are excited about the offering. 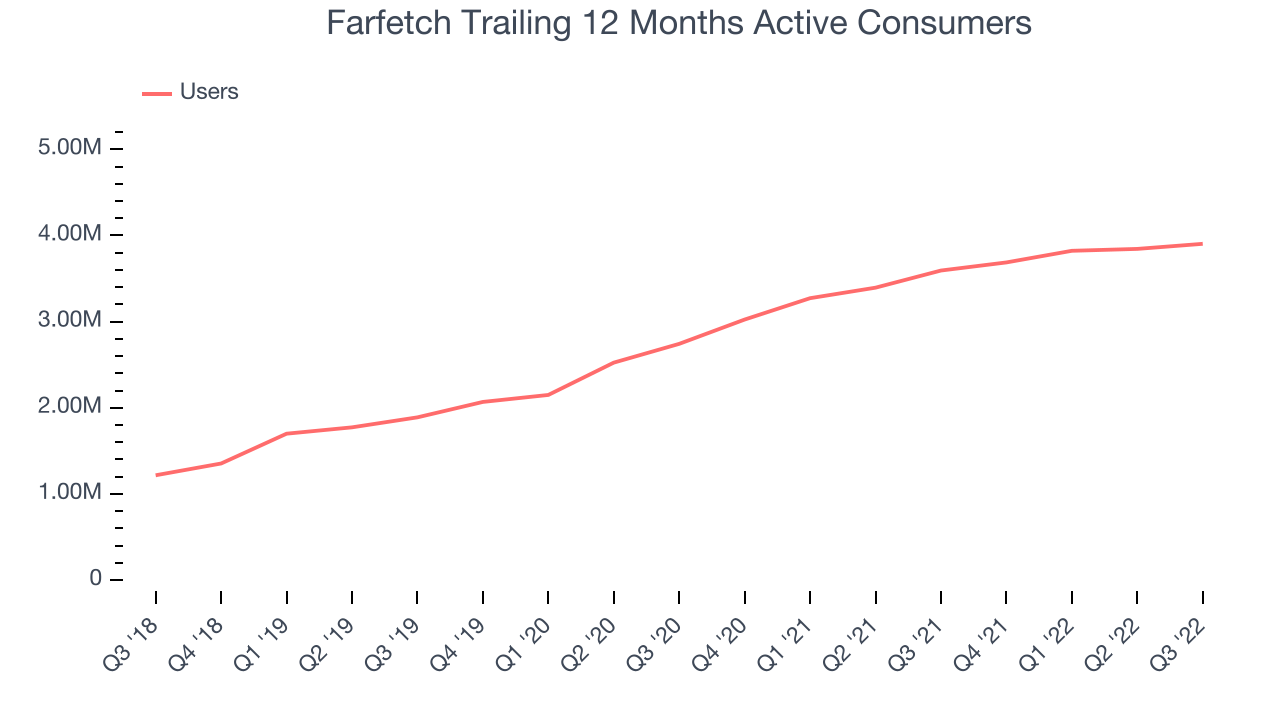 In Q3 the company added 310 thousand active buyers, translating to a 8.62% growth year on year.

Average revenue per user (ARPU) is a critical metric to track for every consumer internet product and for Farfetch it a function of how much its users spend on the platform and what is Farfetch's take rate (cut) from each transaction. 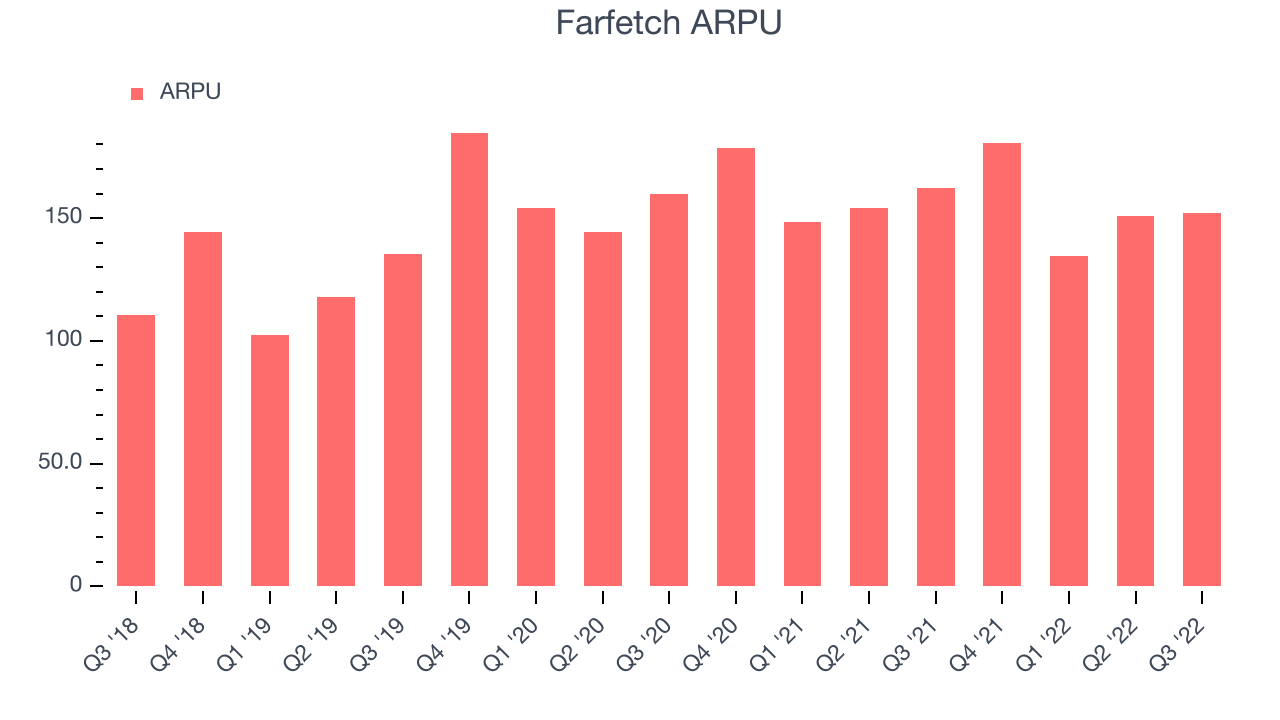 Farfetch’s ARPU has declined over the last two years, averaging 1.93% annually. While it is not great to see the company losing pricing power, at least the strong user growth somewhat compensates for it. This quarter, ARPU shrank 6.23% year on year, settling in at $152.02 for each of the active buyers.

Unlike enterprise software that is typically sold by sales teams, consumer internet businesses like Farfetch grow by a combination of product virality, paid advertisement or incentives.

Farfetch is efficient at acquiring new users, spending 39.3% of its gross profit on marketing over the last year. This level of sales and marketing spend efficiency is indicative of a relatively solid competitive positioning, which gives Farfetch the freedom to invest its resources into new growth initiatives.

Farfetch reported negative EBITDA of $4.11 million this quarter, which was a -0.7% margin. Over the last twelve months Farfetch has shown a rather mediocre profitability for a consumer internet business with LTM EBITDA margins of -3.95%. 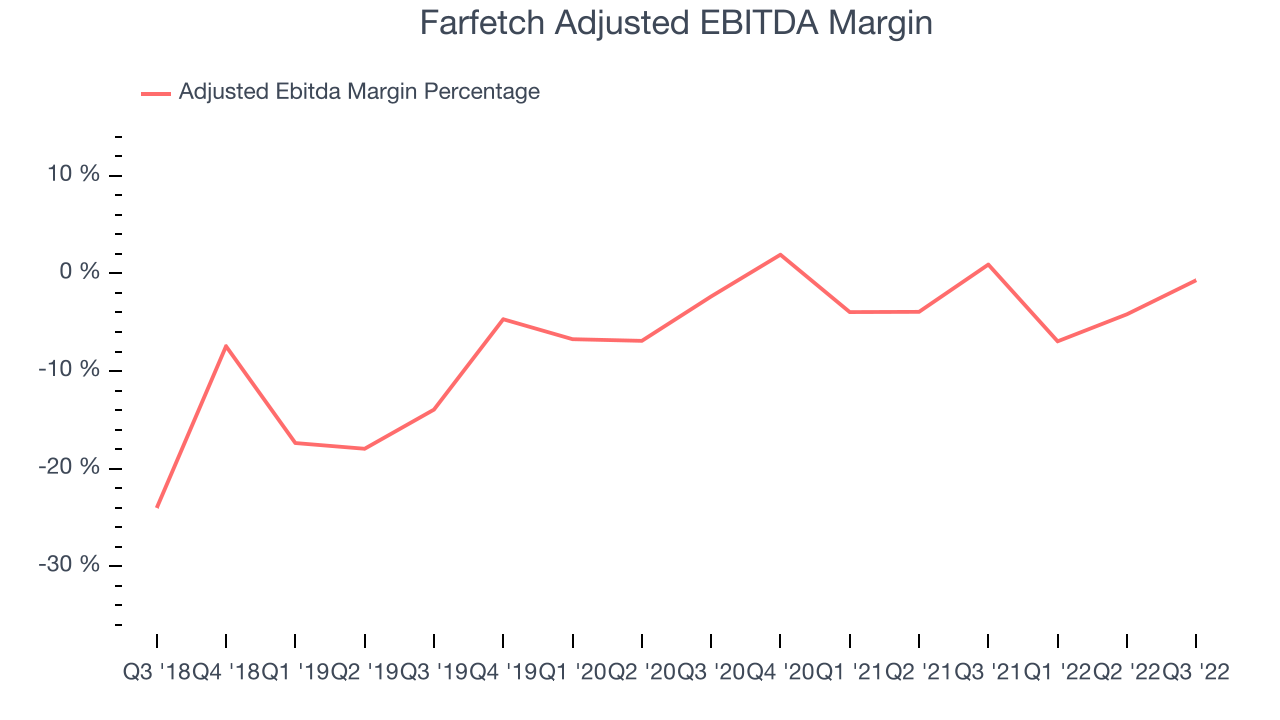 If you follow StockStory for a while, you know that we put an emphasis on cash flow. Why, you ask? We believe that in the end cash is king, as you can't use accounting profits to pay the bills. Farfetch burned through $130.6 million in Q3, increasing the cash burn by 66.1% year on year. 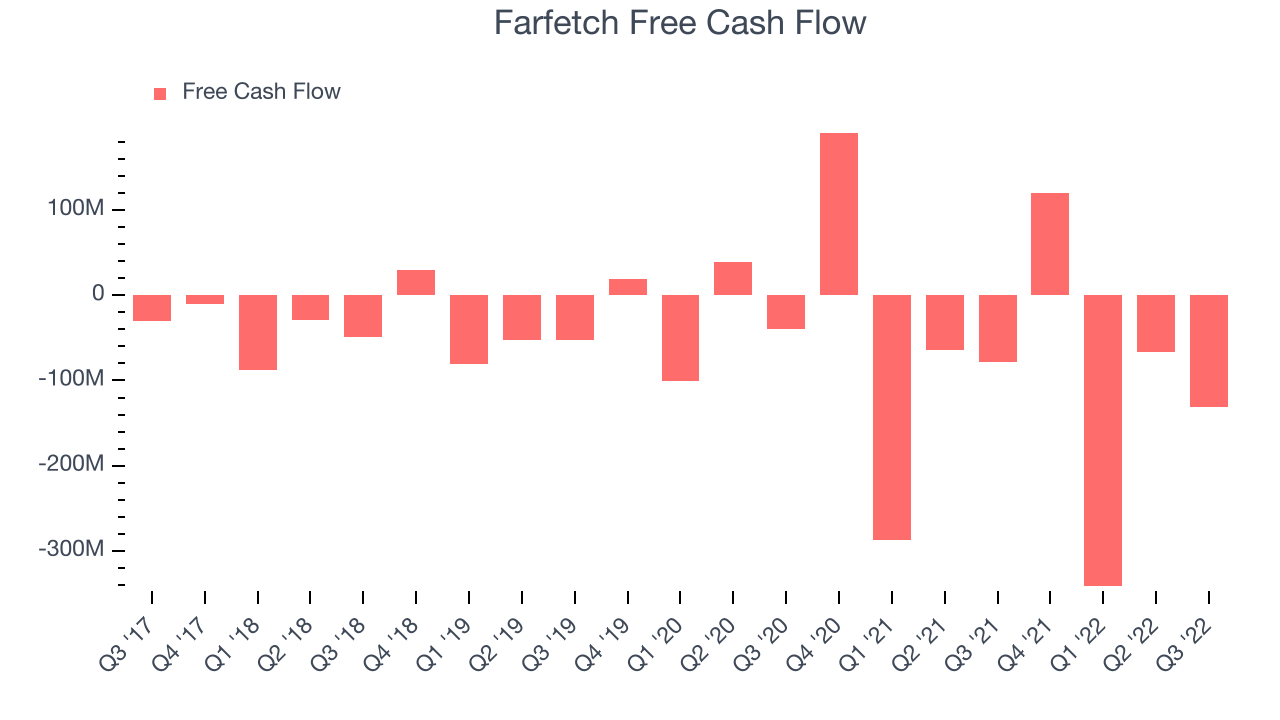 Farfetch has burned through $419.8 million in cash over the last twelve months, an uninspiring -17.9% free cash flow margin. This low FCF margin is a result of Farfetch's capital intensive business model.

Since it has still been burning cash over the last twelve months it is worth keeping an eye on Farfetch’s balance sheet, but we note that with a market capitalization of $3.55 billion and more than $487.3 million in cash, the company has the capacity to continue to prioritise growth over profitability.

It was good to see that Farfetch’s added new users. That feature of these results really stood out as a positive. On the other hand, it was less good to see that the revenue growth was quite weak and it missed analysts' revenue expectations. Overall, it seems to us that this was a complicated quarter for Farfetch. The company is down 9.29% on the results and currently trades at $8.29 per share.

When considering Farfetch, investors should take into account its valuation and business qualities, as well as what happened in the latest quarter. We cheer for everyone who is making the lives of others easier through technology, but in the case of Farfetch we will be cheering from the sidelines. Its revenue growth has been exceptional, and that growth rate is even expected to increase in the short term. But while its user growth has been strong, the downside is that its ARPU has been declining and its cash burn raises the question of whether it can sustainably maintain its growth.

At the moment Farfetch trades at next twelve months EV/EBITDA 36.6x. While we have no doubt one can find things to like about the company, and the price is not completely unreasonable, we think that at the moment there might be better opportunities in the market.