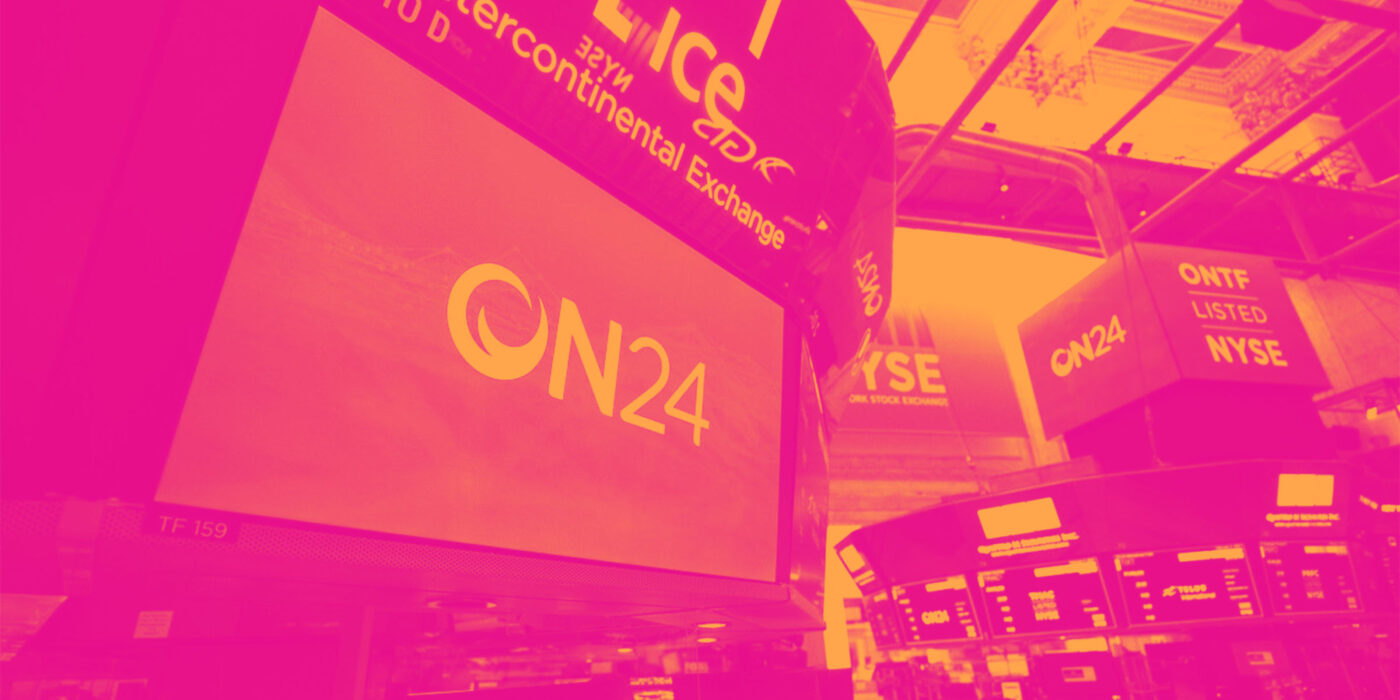 ON24's (NYSE:ONTF) Posts Q4 Sales In Line With Estimates But Growth To Slow Down Next Year

Virtual events software company (NYSE:ONTF) reported results in line with analyst expectations in Q4 FY2021 quarter, with revenue down 2.34% year on year to $52 million. However, guidance for the next quarter was less impressive, coming in at $47.5 million at the midpoint, being 8.87% below analyst estimates. ON24 made a GAAP loss of $9.5 million, down on its profit of $9.5 million, in the same quarter last year.

Is now the time to buy ON24? Access our full analysis of the earnings results here, it's free.

“2021 was the most pivotal year in the company’s history as we achieved numerous milestones across the business. To continue on our path towards reaching $500 million of ARR and beyond, the entire team is focused on executing against key priorities in 2022,” said Sharat Sharan, co-founder and CEO of ON24.

Started in 1998 as a platform to broadcast press conferences, ON24’s (NYSE:ONTF) software helps organizations organize online webinars and other virtual events and convert prospects into customers.

Online marketing and sales are expanding at a rapid pace. Compared to the offline advertising market, which has been affected by the Covid pandemic and is challenging to measure and improve, more organizations are expected to adopt data-driven digital engagement platforms to better engage their customers online.

As you can see below, ON24's revenue growth has been very strong over the last year, growing from quarterly revenue of $53.2 million, to $52 million.

ON24 is guiding for revenue to decline next quarter 5.18% year on year to $47.5 million, a further deceleration on the 102% year-over-year decrease in revenue the company had recorded in the same quarter last year. For the upcoming financial year management expects revenue to be $202 million at the midpoint, declining 0.79% compared to 39.8% growth in FY2021.

There are others doing even better than ON24. Founded by ex-Google engineers, a small company making software for banks has been growing revenue 90% year on year and is already up more than 150% since the IPO last December. You can find it on our platform for free.

What makes the software as a service business so attractive is that once the software is developed, it typically shouldn't cost much to provide it as an ongoing service to customers. ON24's gross profit margin, an important metric measuring how much money there is left after paying for servers, licenses, technical support and other necessary running expenses was at 75.5% in Q4.

That means that for every $1 in revenue the company had $0.75 left to spend on developing new products, marketing & sales and the general administrative overhead. Despite it going down over the last year, this is still a good gross margin that allows companies like ON24 to fund large investments in product and sales during periods of rapid growth and be profitable when they reach maturity.

With a market capitalization of $719.2 million ON24 is among smaller companies, but its more than $382.5 million in cash and positive free cash flow over the last twelve months put it in a very strong position to invest in growth.

We struggled to find many strong positives in these results. On the other hand, it was unfortunate to see that ON24's revenue guidance for the full year miss analyst's expectations and the revenue guidance for next year indicates quite a significant slowdown in growth. Overall, this quarter's results were not the best we've seen from ON24. The company is so far flat on the results and currently trades at $15.6 per share.

ON24 may have had a tough quarter, but does that actually create an opportunity to invest right now? It is important that you take into account its valuation and business qualities, as well as what happened in the latest quarter. We look at that in our actionable report which you can read here, it's free.