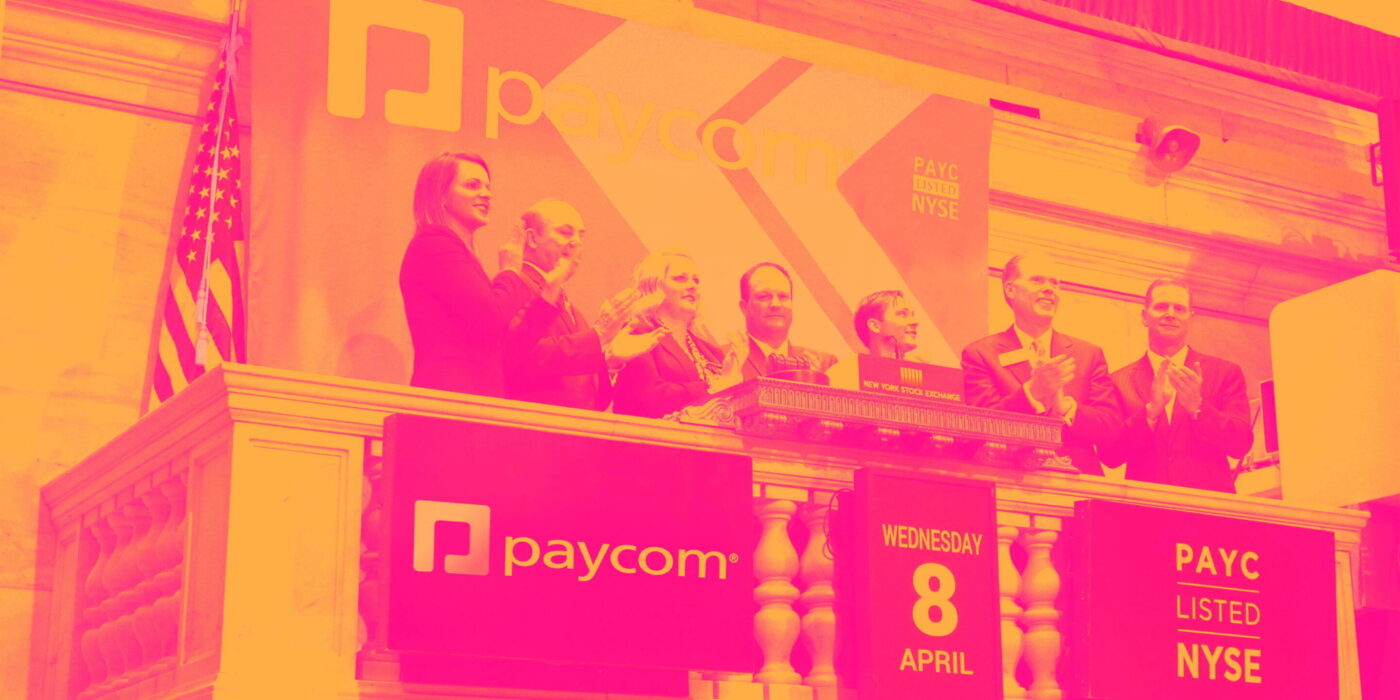 Online payroll and human resource software provider Paycom (NYSE:PAYC) announced better-than-expected results in the Q1 FY2022 quarter, with revenue up 29.8% year on year to $353.5 million. Guidance for next quarter's revenue was $309 million at the midpoint, 2.53% above the average of analyst estimates. Paycom Software made a GAAP profit of $91.9 million, improving on its profit of $64.6 million, in the same quarter last year.

Founded in 1998 as one of the first online payroll companies. Today, Paycom (NYSE:PAYC) provides software for small and medium-sized businesses (SMBs) to manage their payroll and HR needs in one place.

Human Capital Management (HCM) software is meant to streamline mundane, but vital, business functions like keeping attendance, running payroll, and keeping compliant with shifting Federal and local government taxes and labor laws. For many small and medium sized businesses, these are often handled by their accountant which is an unnecessarily expensive use of resources, or QuickBooks style spreadsheets which don’t have sufficient functionality.

Using a single database or system of records, Paycom is a cost effective solution that allows SMBs to simplify the management of all their HR operations throughout an employee’s lifecycle, from when they first apply for a job, to onboarding and managing performance reviews, all the way through collecting retirement benefits.

Paycom has useful functionality that differentiates it from rivals, in part because the company regularly iterates its platform based on customer feedback. One example is that HR managers can automatically share open positions to career sites, which funnels qualified applicants back to the company to easily schedule interviews and conduct background checks. Another is the ability for businesses to conduct self evaluations based on analytics that pull together performance reviews and other HR data from across the company.

Other providers of HR solutions for small and medium-sized businesses include Paychex (NASDAQ:PAYX), ADP (NASDAQ:ADP), Asure, (NYSE:ASUR) and Paylocity (NASDAQ:PCTY).

As you can see below, Paycom Software's revenue growth has been very strong over the last year, growing from quarterly revenue of $272.1 million, to $353.5 million. 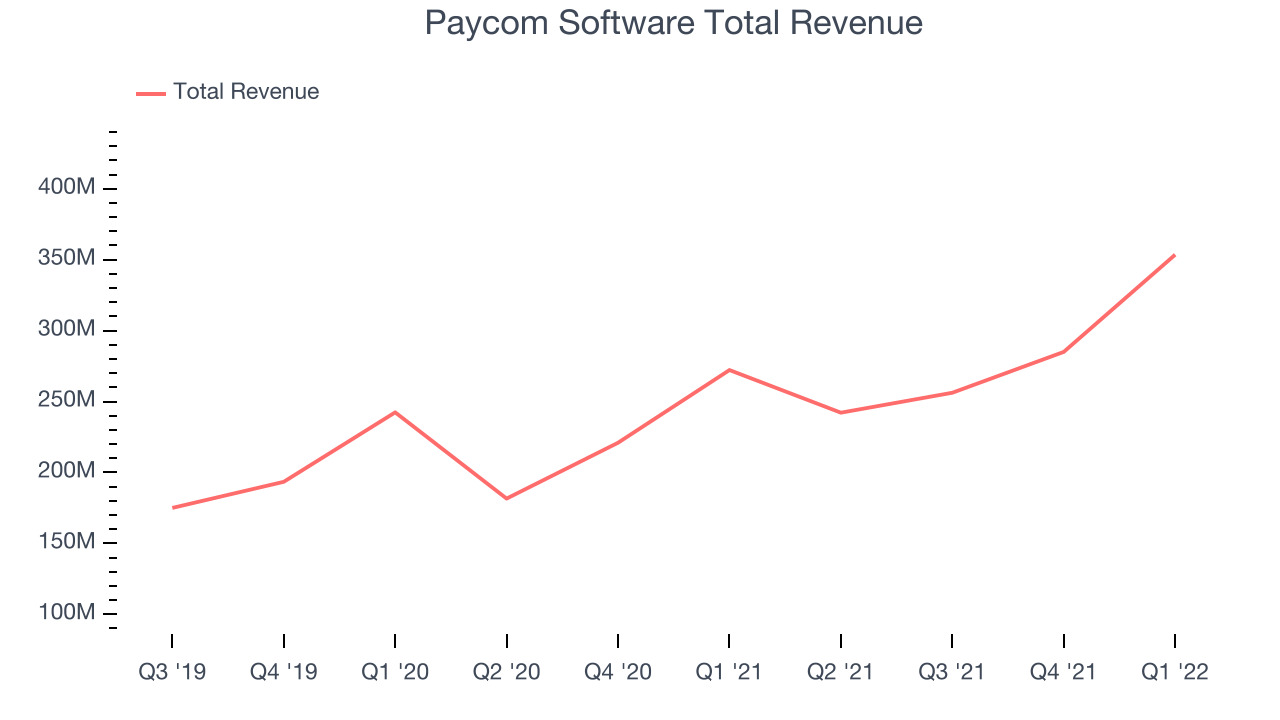 This quarter, Paycom Software's quarterly revenue was once again up a very solid 29.8% year on year. On top of that, revenue increased $68.5 million quarter on quarter, a very strong improvement on the $28.7 million increase in Q4 2021, which shows re-acceleration of growth, and is great to see.

Guidance for the next quarter indicates Paycom Software is expecting revenue to grow 27.6% year on year to $309 million, slowing down from the 33.3% year-over-year increase in revenue the company had recorded in the same quarter last year. Ahead of the earnings results the analysts covering the company were estimating sales to grow 23% over the next twelve months.

What makes the software as a service business so attractive is that once the software is developed, it typically shouldn't cost much to provide it as an ongoing service to customers. Paycom Software's gross profit margin, an important metric measuring how much money there is left after paying for servers, licenses, technical support and other necessary running expenses was at 86.2% in Q1. 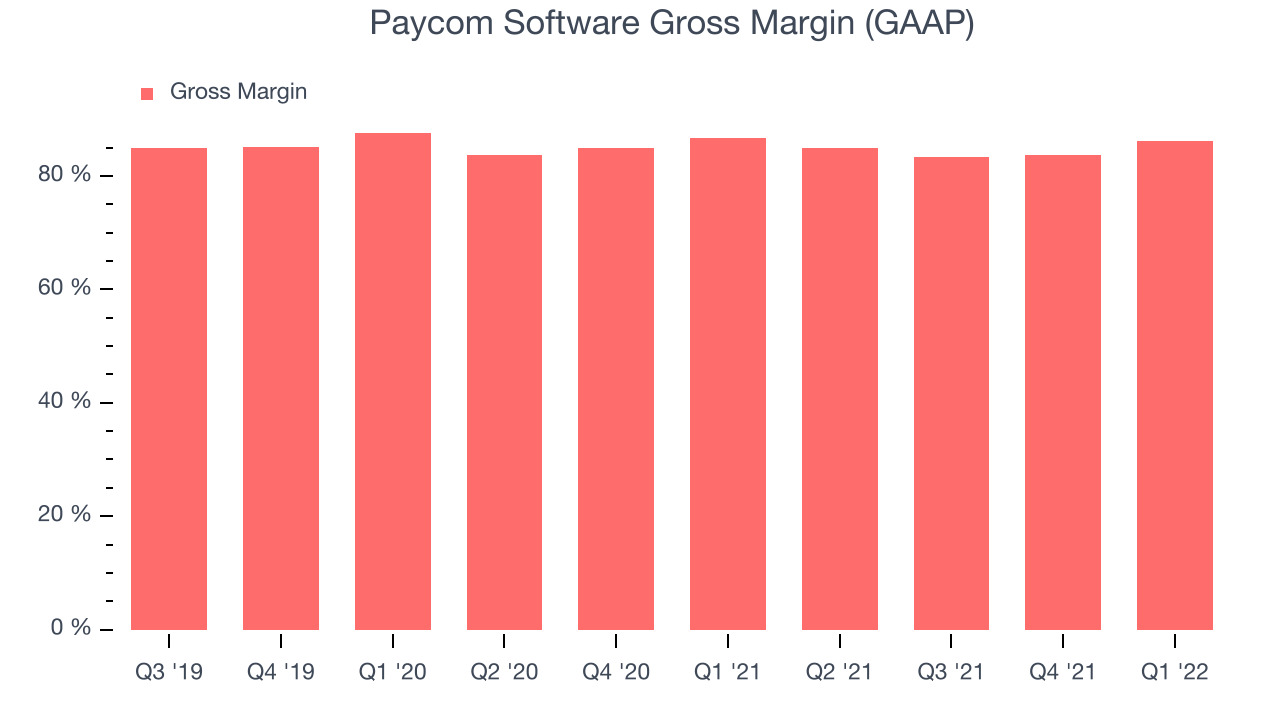 That means that for every $1 in revenue the company had $0.86 left to spend on developing new products, marketing & sales and the general administrative overhead. Significantly up from the last quarter, this is a great gross margin, that allows companies like Paycom Software to fund large investments in product and sales during periods of rapid growth and be profitable when they reach maturity.

If you follow StockStory for a while, you know that we put an emphasis on cash flow. Why, you ask? We believe that in the end cash is king, as you can't use accounting profits to pay the bills. Paycom Software's free cash flow came in at $82.7 million in Q1, up 29% year on year. 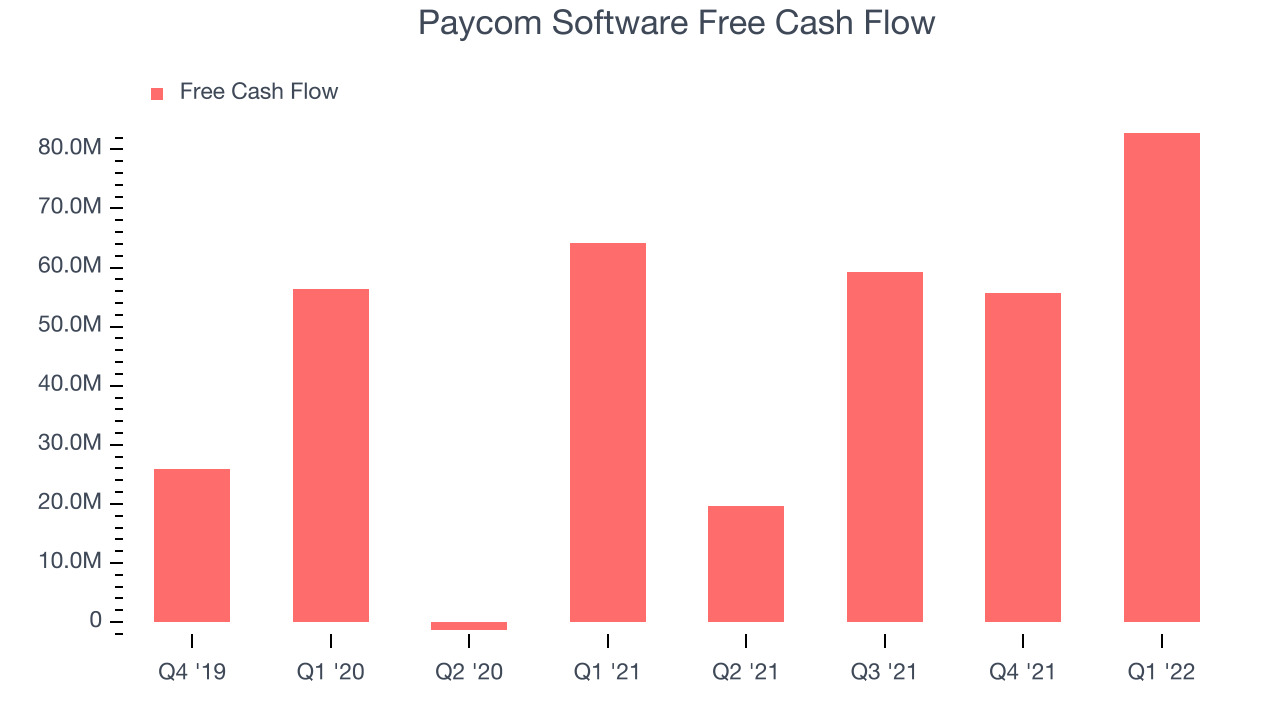 Paycom Software has generated $217.3 million in free cash flow over the last twelve months, an impressive 19.1% of revenues. This extremely high FCF margin is a result of Paycom Software asset lite business model and strong competitive positioning, and provides it the option to return capital to shareholders while still having plenty of cash to invest in the business.

With a market capitalization of $17.6 billion, more than $360.5 million in cash and with free cash flow over the last twelve months being positive, the company is in a very strong position to invest in growth.

We enjoyed seeing Paycom Software’s improve their gross margin materially this quarter. And we were also glad that the revenue guidance for the next quarter exceeded analysts' expectations. Overall, we think this was a really good quarter, that should leave shareholders feeling very positive. The company is up 9.11% on the results and currently trades at $315.44 per share.

When considering Paycom Software, investors should take into account its valuation and business qualities, as well as what happened in the latest quarter. There are a number of reasons why we think Paycom Software is a great business. First, its revenue growth has been strong. On top of that, its impressive gross margins are indicative of excellent business economics, and its very efficient customer acquisition hints at the potential for strong profitability.

Paycom Software's price to sales ratio based on the next twelve months is 12.0x, suggesting that the market is expecting more steady growth, relative to the hottest tech stocks. Looking at the tech landscape today, Paycom Software's qualities really stand out. We'd argue more mature tech businesses are sometimes underestimated because they aren't growing quite as quickly as the hottest stocks, and we really like the stock at this price.

The Wall St analysts covering the company had a one year price target of $420.2 per share right before these results, implying that they saw upside in buying Paycom Software even in the short term.