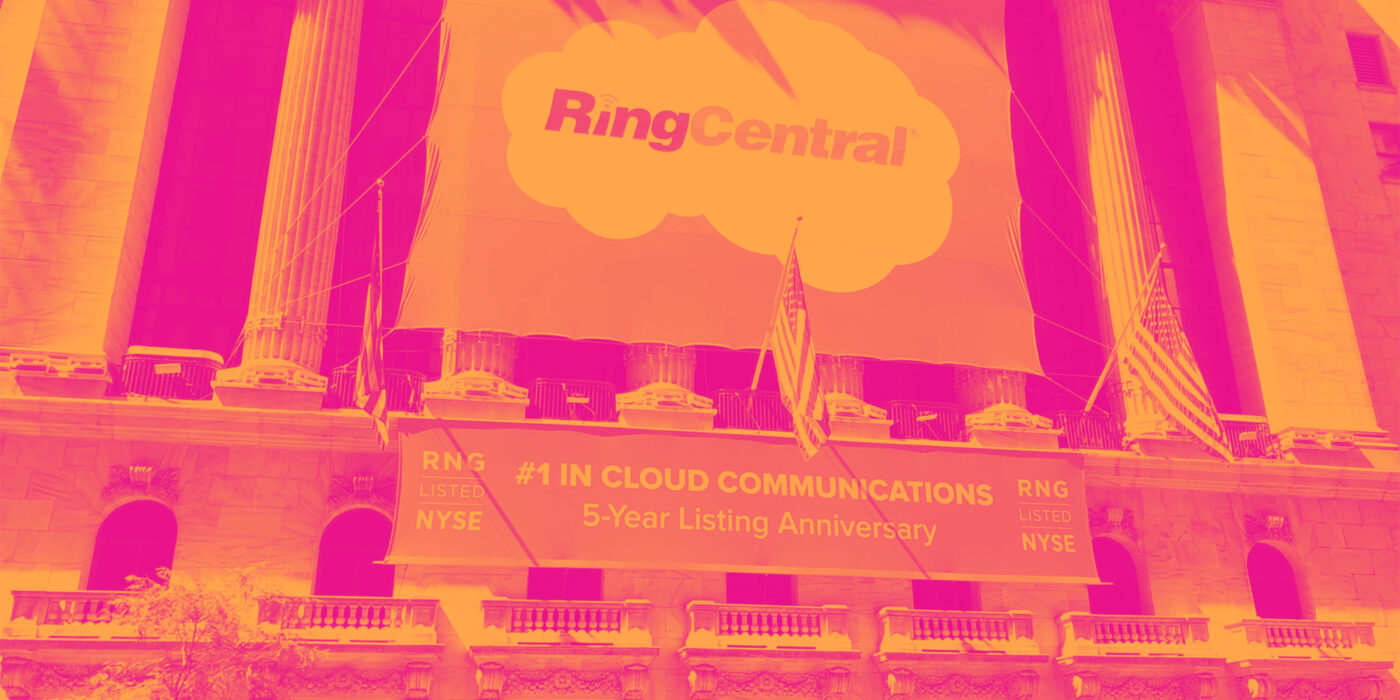 Office and call centre communications software provider RingCentral (NYSE:RNG) reported Q3 FY2022 results that beat analyst expectations, with revenue up 22.7% year on year to $509 million. However, guidance for the next quarter was less impressive, coming in at $526 million at the midpoint, being 3.55% below analyst estimates. RingCentral made a GAAP loss of $284.6 million, down on its loss of $146.7 million, in the same quarter last year.

Traditionally, the technology used by enterprises to set up their own private telephone networks to communicate both internally and externally involved a lot of on-premise technology and even getting locked into proprietary phones.

RingCentral offers the same functionality through internet telephony (VoIP) integrated in its cloud based phone app. Its advantages include running on any mobile or desktop device, lower cost than legacy competitors, additional functionality like auto-receptionist and rule-based call routing. The company has integrated video calls and chat into their app, with the aim of making their software the only one a company needs to power all their communications. Building on the same technology, RingCentral also develops software to power contact centres.

As you can see below, RingCentral's revenue growth has been very strong over the last two years, growing from quarterly revenue of $303.6 million in Q3 FY2020, to $509 million. 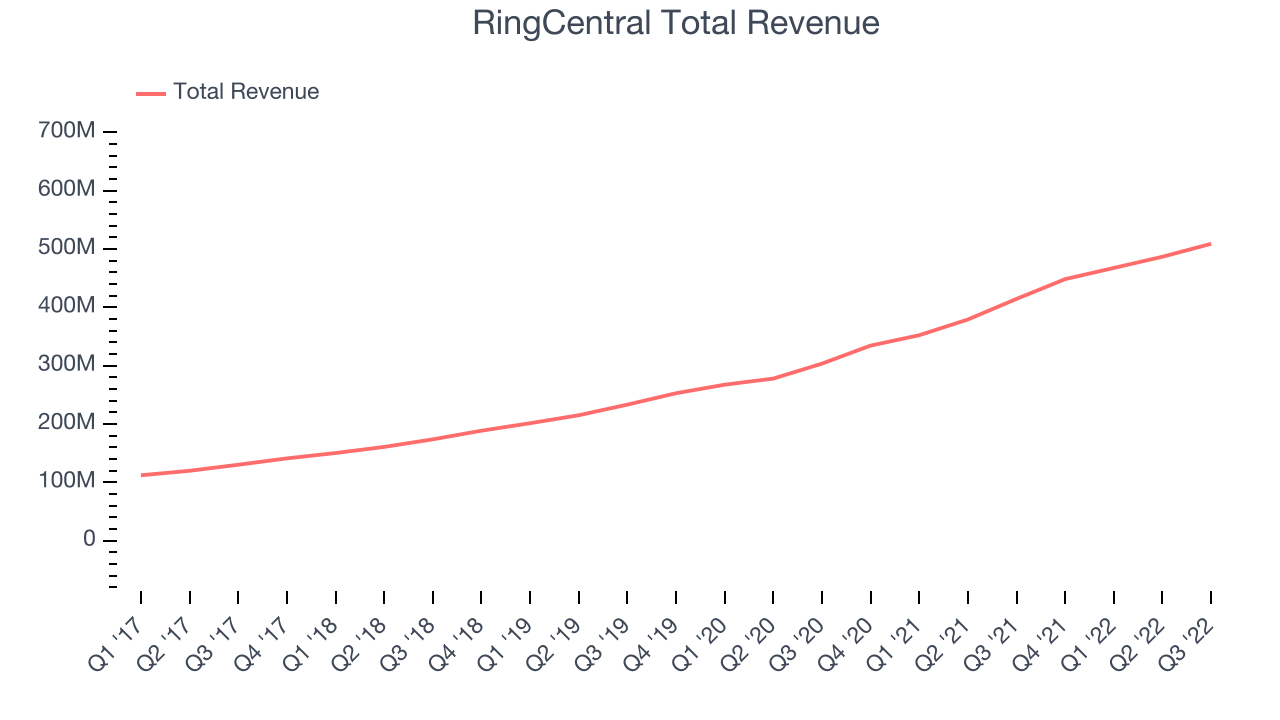 This quarter, RingCentral's quarterly revenue was once again up a very solid 22.7% year on year. On top of that, revenue increased $22.1 million quarter on quarter, a solid improvement on the $19.2 million increase in Q2 2022. Happily, that's a slight re-acceleration of growth.

Guidance for the next quarter indicates RingCentral is expecting revenue to grow 17.2% year on year to $526 million, slowing down from the 34% year-over-year increase in revenue the company had recorded in the same quarter last year. Ahead of the earnings results the analysts covering the company were estimating sales to grow 21.2% over the next twelve months.

What makes the software as a service business so attractive is that once the software is developed, it typically shouldn't cost much to provide it as an ongoing service to customers. RingCentral's gross profit margin, an important metric measuring how much money there is left after paying for servers, licenses, technical support and other necessary running expenses was at 67% in Q3. 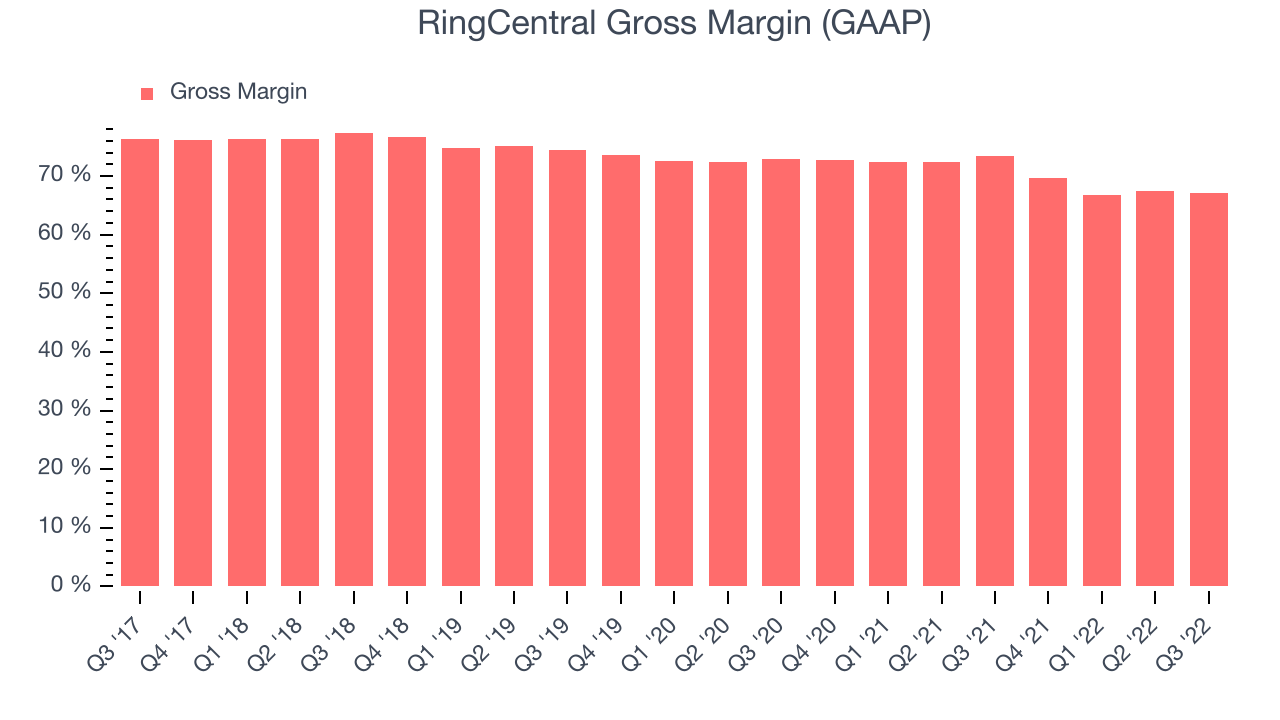 That means that for every $1 in revenue the company had $0.67 left to spend on developing new products, marketing & sales and the general administrative overhead. This would be considered a low gross margin for a SaaS company and it has been going down over the last year, which is probably the opposite direction shareholders would like to see it go.

If you have followed StockStory for a while, you know that we put an emphasis on cash flow. Why, you ask? We believe that in the end cash is king, as you can't use accounting profits to pay the bills. RingCentral's free cash flow came in at $20.5 million in Q3, down 15.5% year on year. 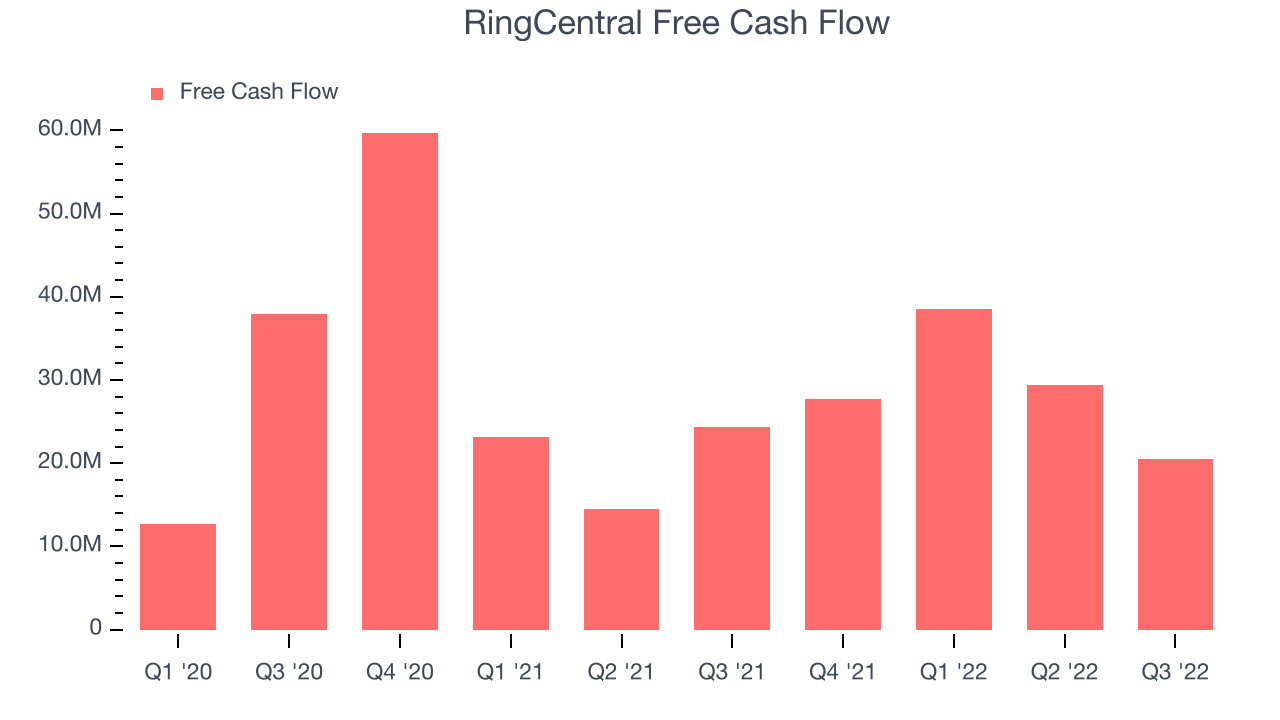 RingCentral has generated $116.1 million in free cash flow over the last twelve months, a decent 6.07% of revenues. This FCF margin is a result of RingCentral asset lite business model, and provides it with optionality and decent amount of cash to invest in the business.

With a market capitalization of $2.87 billion RingCentral is among smaller companies, but its more than $305.3 million in cash and positive free cash flow over the last twelve months give us confidence that RingCentral has the resources it needs to pursue a high growth business strategy.

RingCentral topped analysts’ revenue expectations this quarter, even if just narrowly. That feature of these results really stood out as a positive. On the other hand, it was unfortunate to see that the revenue guidance for the next quarter missed analysts' expectations. Overall, this quarter's results could have been better. The company is up 10.5% on the results and currently trades at $31.33 per share.

RingCentral may have had a bad quarter, but investors should also consider its valuation and business qualities, when assessing the investment opportunity. Although RingCentral is not a bad business, it probably wouldn't be one of our picks. Its revenue growth has been strong, though we don't expect it to maintain historical growth rates. But while its strong free cash flow generation gives it re-investment options, unfortunately its gross margins show its business model is much less lucrative than the best software businesses.

RingCentral's price to sales ratio based on the next twelve months is 1.2x, suggesting that the market has lower expectations of the business, relative to the high growth tech stocks. We don't really see a big opportunity in the stock at the moment, but in the end beauty is in the eye of the beholder. And if you like the company, it seems that RingCentral doesn't trade at a completely unreasonable price point.