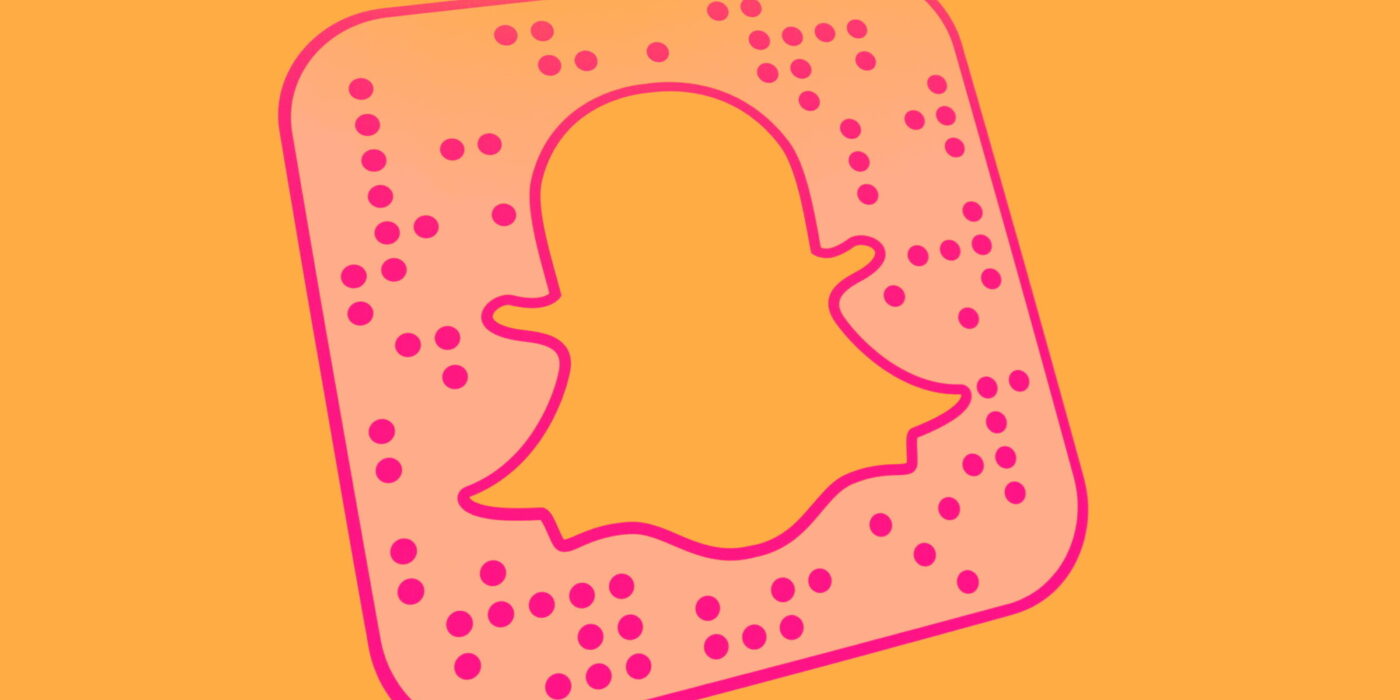 Snapchat differentiates itself from other social networks through product innovation around Augmented Reality (AR), demographics, and the ephemeral nature of its messaging and Stories. Snapchat is a mobile first, camera centric image messaging app whose disappearing messages are meant to emphasize personal expression and living in the moment. The Snapchat platform has 5 distinct features: the main Camera tab, where users send snaps to friends, Communication (messaging/video calls), Snap Map (personalized map that shows friends and local businesses), Stories (content from users, news, and professionally generated content), and Spotlight (sort of a TikTok-like never ending spool of content Snapchat tailors to a user’s likes).

More so than other social networks, Snapchat is geared to digital natives, specifically 13-34 year olds. This is what makes the platform appealing to advertisers - its unique ability to address a hard to reach demographic at scale. The majority of under 35s in the US, Australia, and Western Europe use Snapchat. Originally built only for iOS, Snapchat introduced a version for Android in 2019, which is why rest of world adoption is still in its early stages. The reason advertisers have flocked to Snapchat is the very high ROI for advertisers: the cost of advertising on Snap remains low.

Snap's revenue growth over the last three years has been impressive, averaging 46.5% annually. The initial impact of the pandemic was positive for Snap's revenue, but growth rates subsequently normalized. 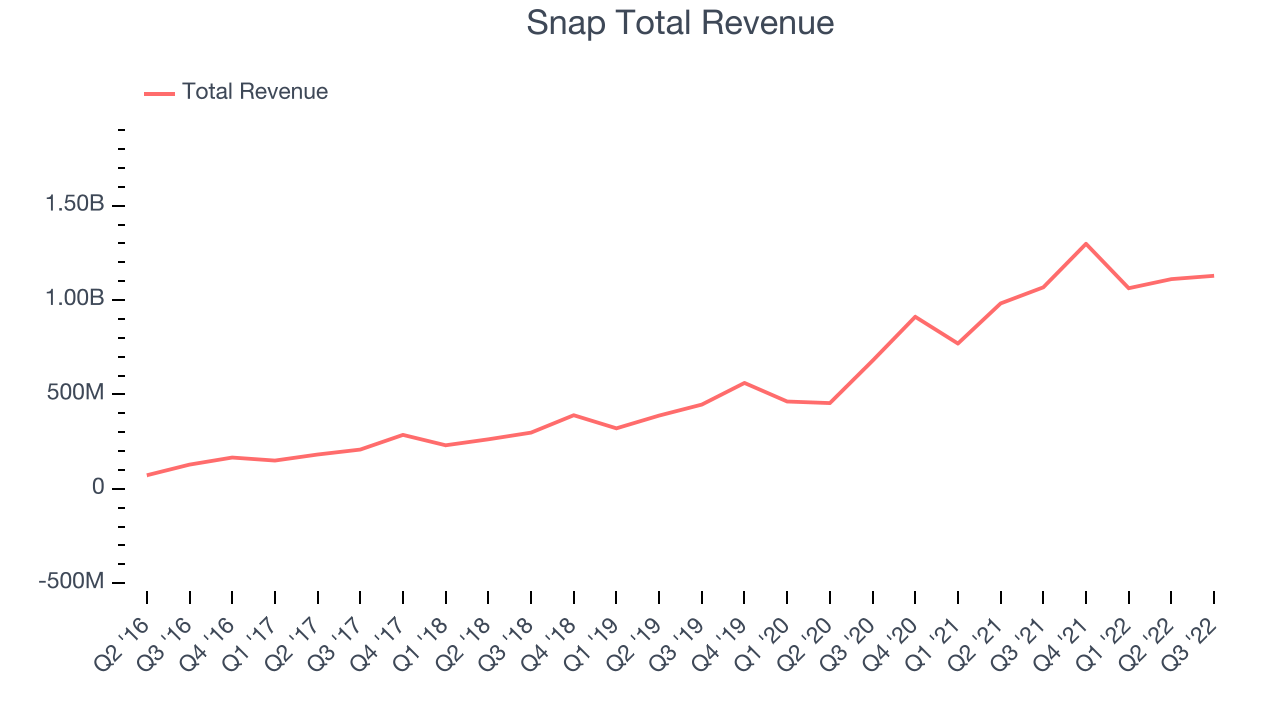 This quarter, Snap reported an mediocre 5.71% year on year revenue growth, and this result fell short of what analysts were expecting.

Ahead of the earnings results the analysts covering the company were estimating sales to grow 12.1% over the next twelve months.

Over the last two years the number of Snap's daily active users, a key usage metric for the company, grew 20.7% annually to 363 million users. This is a strong growth for a consumer internet company. 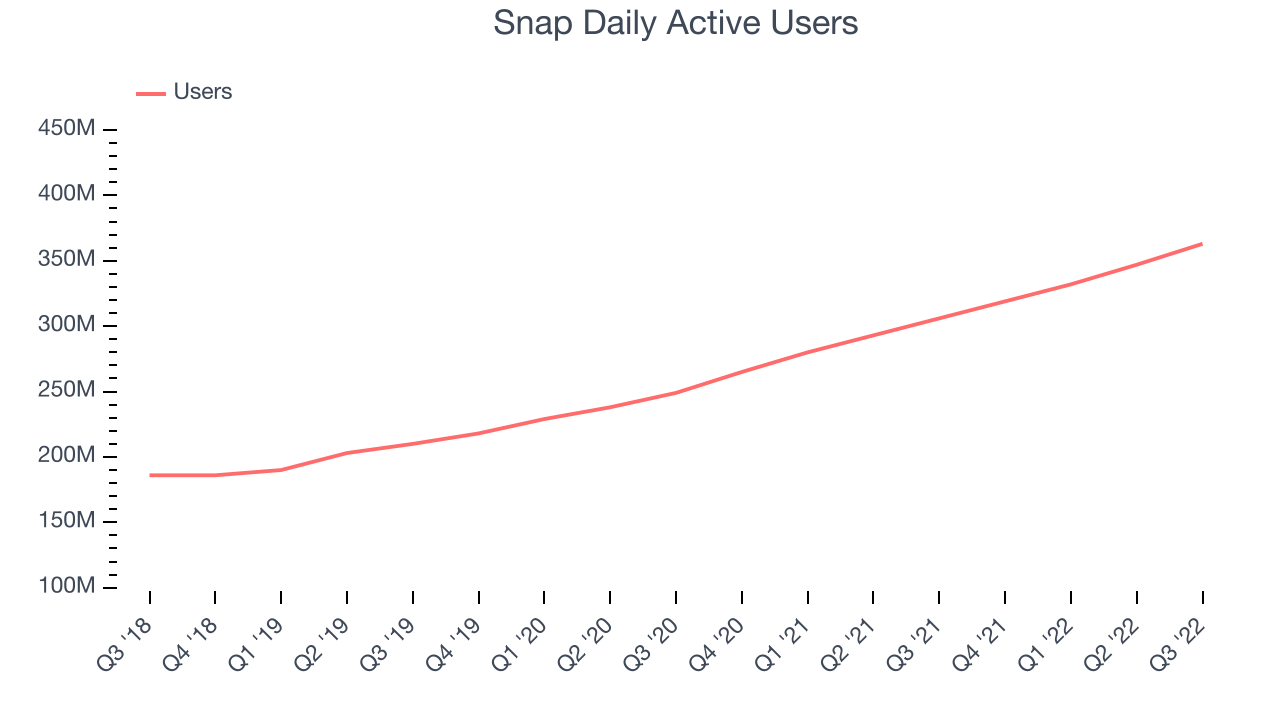 In Q3 the company added 57 million daily active users, translating to a 18.6% growth year on year.

Average revenue per user (ARPU) is a critical metric to track for every consumer internet product and for Snap it measures how much it makes off ads served to each user, proxy for how valuable advertisers find its audience and its ad-targeting capabilities. 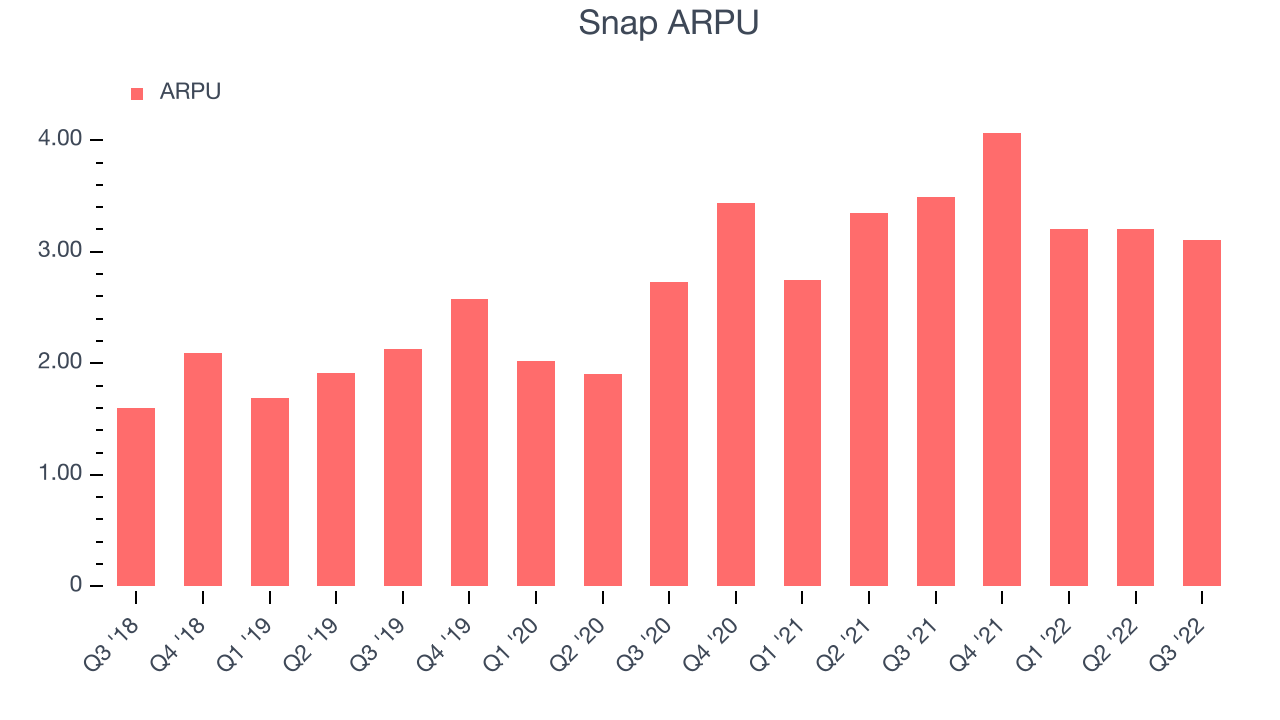 Snap’s ARPU growth has been strong over the last two years, averaging 24.1%. The ability to increase price while still growing its user base reflects the strength of Snap’s platform, as its users continue to spend more than last year. This quarter, ARPU shrank 10.8% year on year, settling in at $3.10 for each of the daily active users.

Unlike enterprise software that is typically sold by sales teams, consumer internet businesses like Snap grow by a combination of product virality, paid advertisement or incentives.

Snap is efficient at acquiring new users, spending 38.5% of its gross profit on marketing over the last year. This level of sales and marketing spend efficiency is indicative of a relatively solid competitive positioning, which gives Snap the freedom to invest its resources into new growth initiatives.

Snap's EBITDA was $72.6 million this quarter, which translates to a 6.43% margin. Over the last twelve months, the company has exhibited strong profitability with average EBITDA margins of 9.58%. 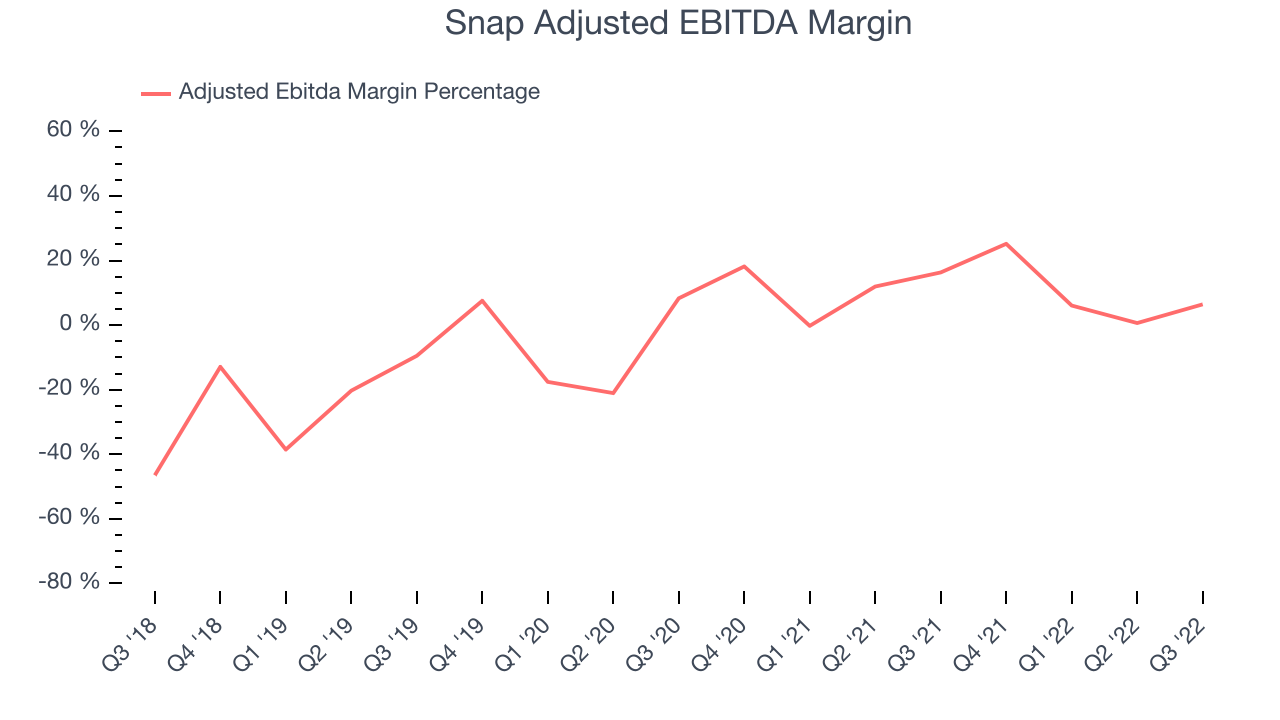 If you follow StockStory for a while, you know that we put an emphasis on cash flow. Why, you ask? We believe that in the end cash is king, as you can't use accounting profits to pay the bills. Snap's free cash flow came in at $18.1 million in Q3, down 64.9% year on year. 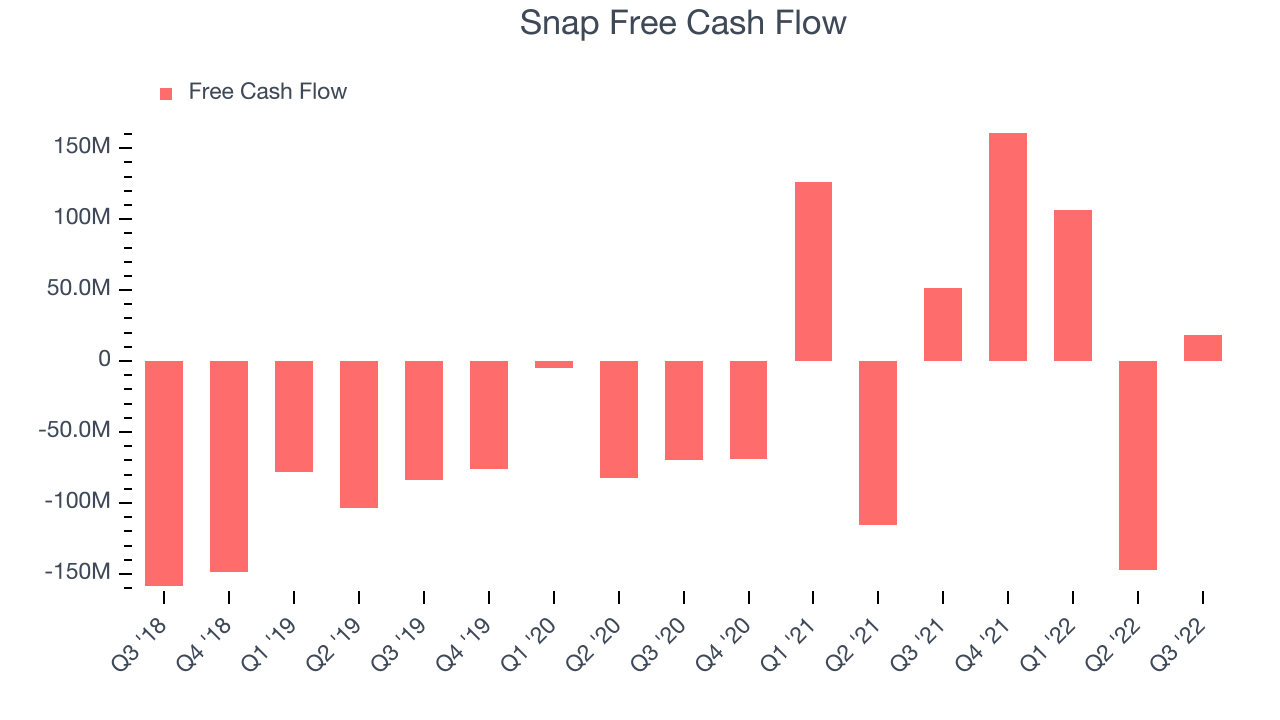 Snap has generated $137.9 million in free cash flow over the last twelve months, a 2.99% of revenues. This FCF margin is a result of Snap asset lite business model, and provides it with the optionality to further invest in the business.

With a market capitalization of $17.9 billion, more than $4.42 billion in cash and with free cash flow over the last twelve months being positive, the company is in a very strong position to invest in growth.

It was great to see that Snap’s user base is growing, although the numbers did miss analyst estimates. On the other hand, it was unfortunate to see that Snap also missed analysts' revenue expectations and the revenue growth was quite weak. Overall, this quarter's results could have been better. The company is down 21.5% on the results and currently trades at $8.48 per share.

When considering Snap, investors should take into account its valuation and business qualities, as well as what happened in the latest quarter. We think Snap is a solid business. We would expect growth rates to moderate from here, but its revenue growth has been exceptional, over the last three years. On top of that, its user growth has been strong, and its ARPU is growing.

At the moment Snap trades at next twelve months EV/EBITDA 24.2x. There are definitely things to like about Snap and looking at the consumer internet landscape right now, it seems that it doesn't trade at an unreasonable price point.

The Wall St analysts covering the company had a one year price target of $14.8 per share right before these results, implying that they saw upside in buying Snap even in the short term.