Game engine maker Unity (NYSE:U) fell short of analyst expectations in Q1 FY2022 quarter, with revenue up 36.3% year on year to $320.1 million. Guidance for the next quarter also missed analyst expectations with revenues guided to $292.5 million at the midpoint, or 18.6% below analyst estimates. Unity made a GAAP loss of $177.5 million, down on its loss of $107.4 million, in the same quarter last year.

Instead of having to build everything from scratch, game developers can use Unity’s game engine that handles things like the physics of how players and objects move or how networking and in-app purchases work.

Similarly to when opening a new restaurant a chef just buys an oven and other tools needed, and focuses their effort on the recipes and the food, a game developer can now focus on the story, characters and rules of their game rather than having to build their own tools. While it has been lately venturing into VR and movie production, Unity is still most popular with mobile game makers, powering a large share of the top 1,000 games.

The demand for rich, interactive 2D, 3D, VR and AR experiences is growing, and while the ubiquitous metaverse might still be more of a buzzword than a real thing, what is real is the demand for the tools to create these experiences, whether they are games or interactive movies.

As you can see below, Unity's revenue growth has been impressive over the last year, growing from quarterly revenue of $234.7 million, to $320.1 million. 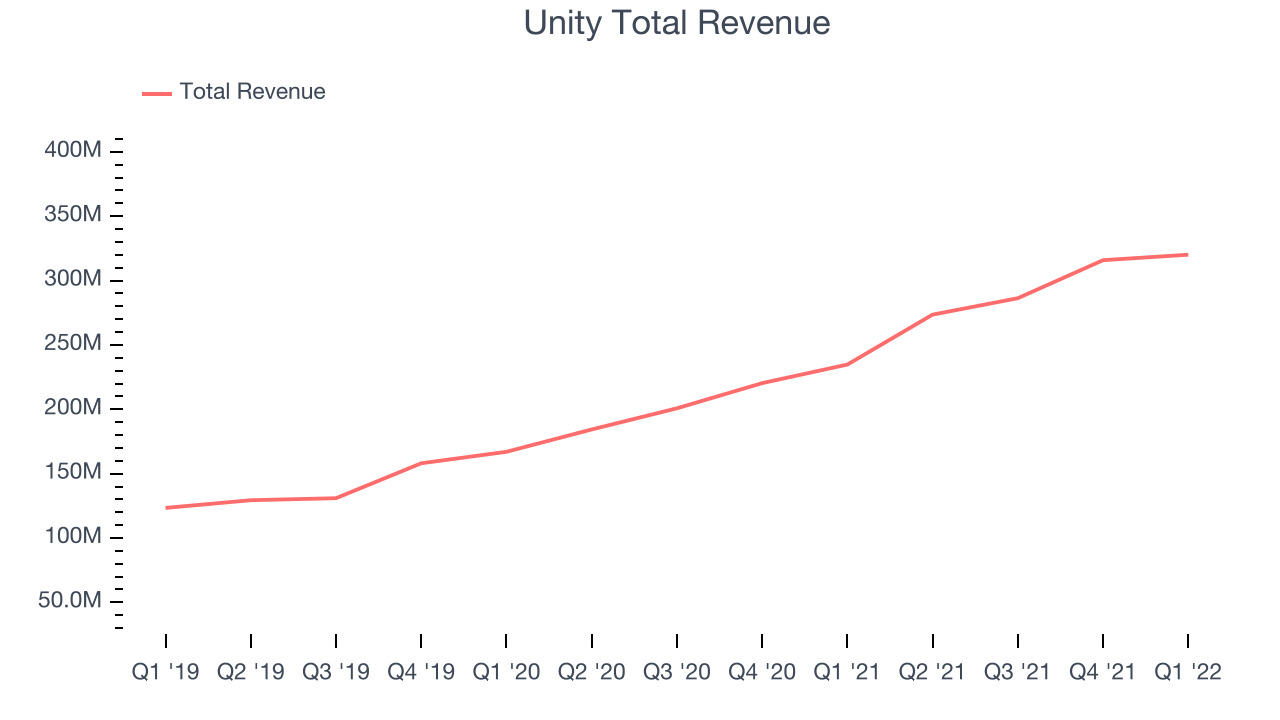 Despite missing analyst estimates of revenue, this was another quarter of strong revenue growth for Unity with revenue up 36.3% year on year. But the growth did slow down compared to last quarter, as the revenue increased by just $4.26 million in Q1, compared to $29.5 million in Q4 2021. We'd like to see revenue increase by a greater amount each quarter, but a one-off fluctuation is usually not concerning.

Guidance for the next quarter indicates Unity is expecting revenue to grow 6.92% year on year to $292.5 million, slowing down from the 48.4% year-over-year increase in revenue the company had recorded in the same quarter last year. Ahead of the earnings results the analysts covering the company were estimating sales to grow 34% over the next twelve months.

You can see below that at the end of the quarter Unity reported 1,083 enterprise customers paying more than $100,000 annually, an increase of 31 on last quarter. That is a bit less contract wins than last quarter and also quite a bit below what we have typically seen over the past couple of quarters, suggesting that the sales momentum with large customers is slowing down. 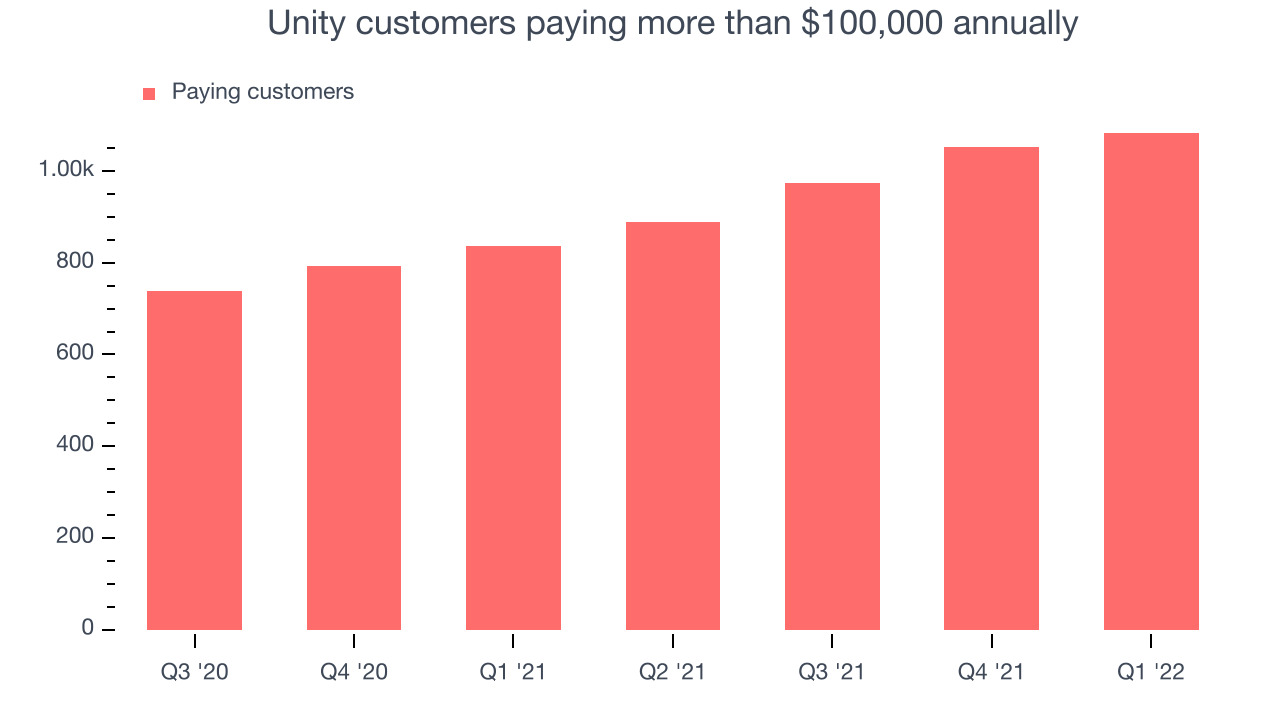 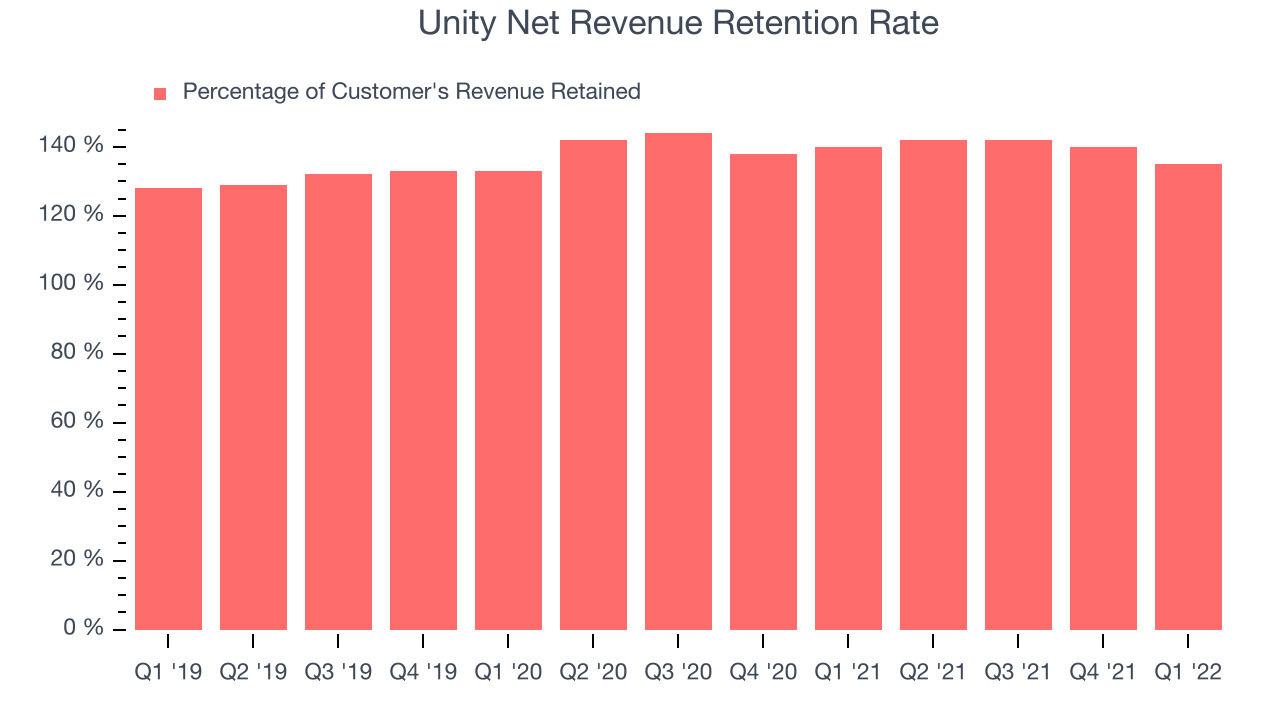 Unity's net revenue retention rate, an important measure of how much customers from a year ago were spending at the end of the quarter, was at 135% in Q1. That means even if they didn't win any new customers, Unity would have grown its revenue 35% year on year. Despite the recent drop this is still a great retention rate and a clear proof of a great product. We can see that Unity's customers are very satisfied with their software and are using it more and more over time.

What makes the software as a service business so attractive is that once the software is developed, it typically shouldn't cost much to provide it as an ongoing service to customers. Unity's gross profit margin, an important metric measuring how much money there is left after paying for servers, licenses, technical support and other necessary running expenses was at 70.6% in Q1. 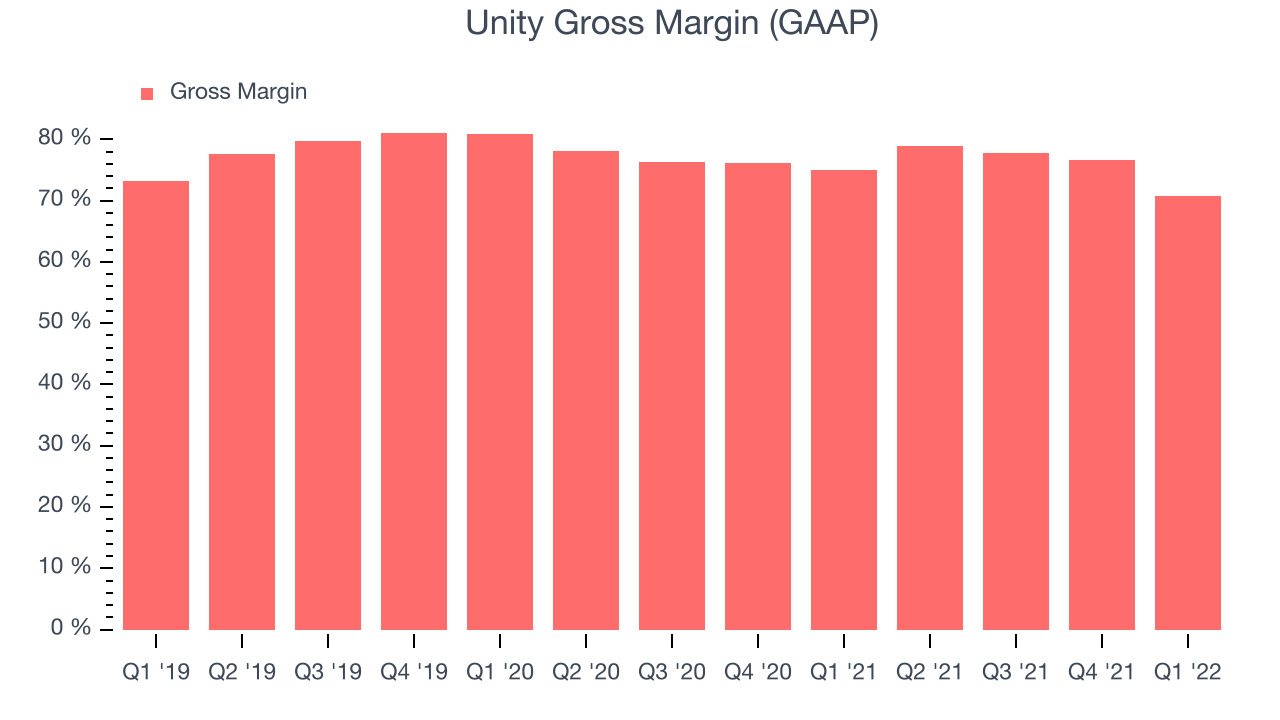 That means that for every $1 in revenue the company had $0.70 left to spend on developing new products, marketing & sales and the general administrative overhead. Despite the recent drop this is still around the lower average of what we typically see in SaaS businesses. Gross margin has a major impact on a company’s ability to invest in developing new products and sales & marketing, which may ultimately determine the winner in a competitive market so it is important to track.

If you follow StockStory for a while, you know that we put an emphasis on cash flow. Why, you ask? We believe that in the end cash is king, as you can't use accounting profits to pay the bills. Unity's free cash flow came in at $86.3 million in Q1, turning positive year on year. 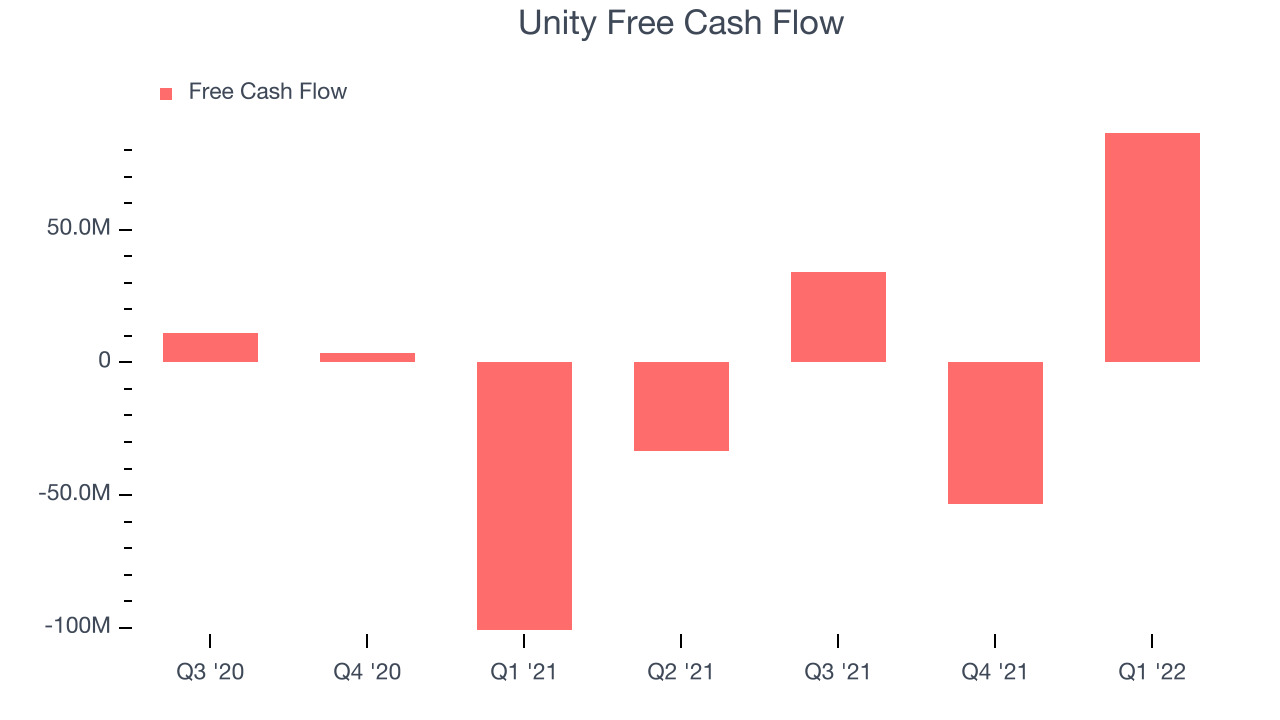 Unity has generated $33.6 million in free cash flow over the last twelve months, 2.81% of revenues. This FCF margin is a result of Unity asset lite business model, and provides it with at least some cash to invest in the business without depending on capital markets.

With a market capitalization of $14.9 billion, more than $1.8 billion in cash and with free cash flow over the last twelve months being positive, the company is in a very strong position to invest in growth.

We enjoyed seeing Unity’s impressive revenue growth this quarter. That feature of these results really stood out as a positive. On the other hand, it was unfortunate to see that Unity's revenue guidance for the full year missed analyst's expectations and the revenue guidance for the next quarter missed analysts' expectations. Overall, this quarter's results were not the best we've seen from Unity. The company is down 32.5% on the results and currently trades at $32.41 per share.

Unity may have had a bad quarter, but investors should also consider its valuation and business qualities, when assessing the investment opportunity. We think Unity is a good business. Its revenue growth has been exceptional. On top of that, its customers are increasing their spending quite quickly, suggesting that they love the product, and its strong gross margins suggest it can operate profitably and sustainably.

Unity's price to sales ratio based on the next twelve months is 8.8x, suggesting that the market is expecting more moderate growth, relative to the hottest tech stocks. There is definitely a lot of things to like about Unity and looking at the tech landscape right now, it seems that it doesn't trade at an unreasonable price point.

The Wall St analysts covering the company had a one year price target of $141.3 per share right before these results, implying that they saw upside in buying Unity even in the short term.