Ride sharing and on demand delivery service Uber (NYSE: UBER) reported results ahead of analyst expectations in the Q2 FY2022 quarter, with revenue up 105% year on year to $8.07 billion. Uber made a GAAP loss of $2.6 billion, down on its profit of $1.11 billion, in the same quarter last year.

Uber pioneered the online ride hailing model, allowing users to summon taxi’s via their mobile devices, an innovation that disrupted modern transportation. The company next expanded into food delivery with UberEats, and has grown a trucking brokerage business, Uber Freight. It is the largest global ride sharing network, with majority market share in the most countries it operates in.

The company’s value propositions are multiple. For individuals, Uber effectively lowered the cost per mile for taxi transportation vs. legacy cabs, while providing ease of use and convenience. For drivers, it has provided flexible earning opportunities. While for restaurants and merchants, Uber’s platform has allowed them to expand their consumer reach, and provided an online presence. 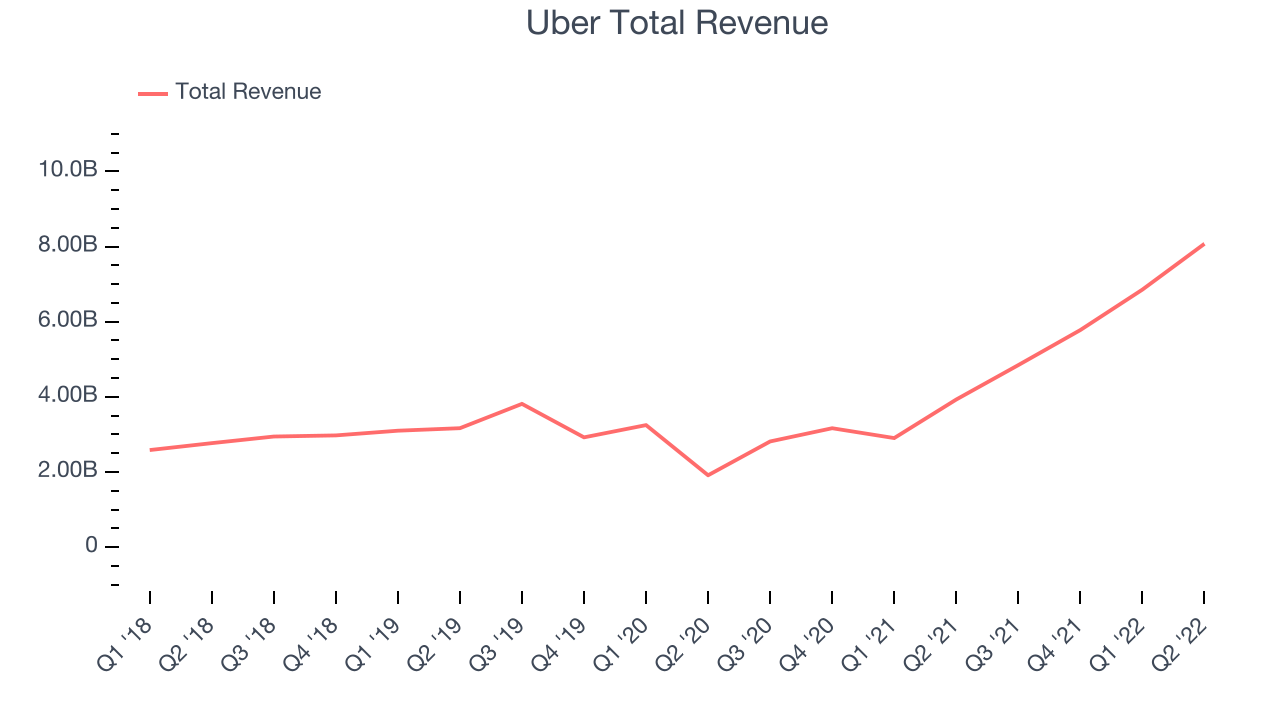 Ahead of the earnings results the analysts covering the company were estimating sales to grow 31.5% over the next twelve months.

As a gig economy marketplace, Uber generates revenue growth by a combination of the volume of services users order and how much commission it earns.

Over the last two years the number of Uber's paying users, a key usage metric for the company, grew 17.7% annually to 122 million users. This is a solid growth for a consumer internet company. 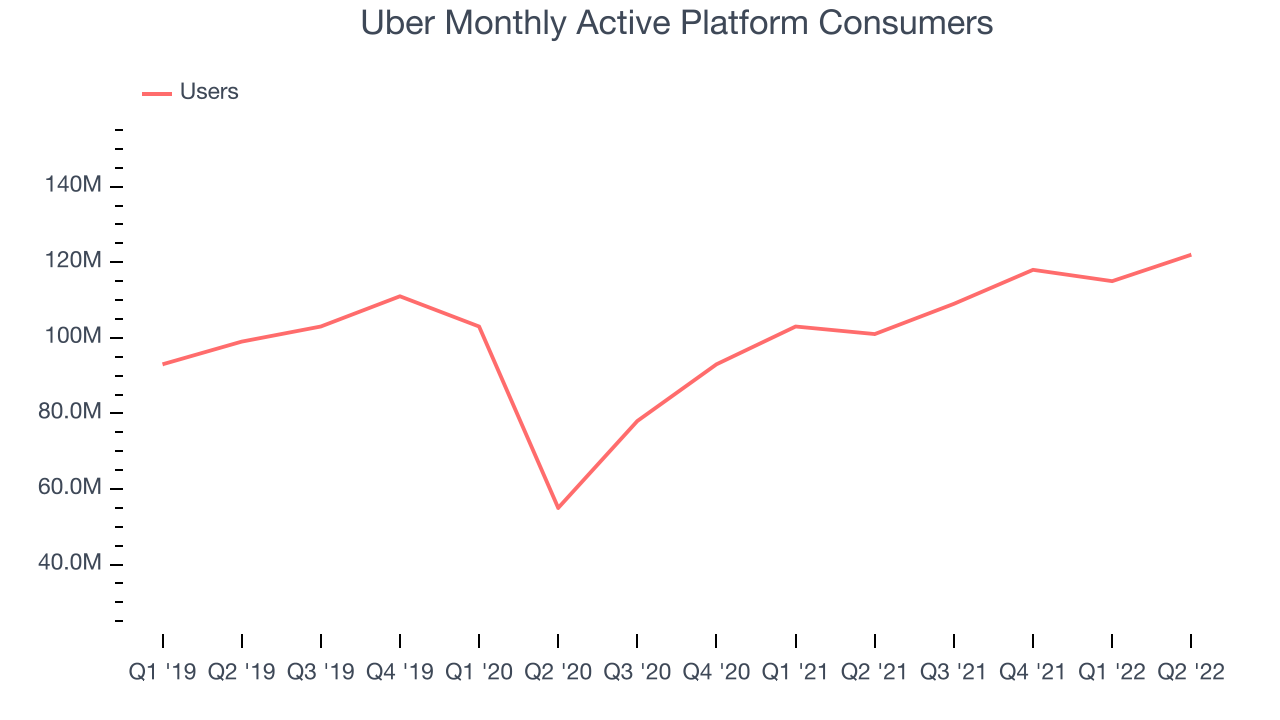 In Q2 the company added 21 million paying users, translating to a 20.7% growth year on year.

Average revenue per user (ARPU) is a critical metric to track for every consumer internet product and for Uber it measures how much it earns off each transaction on its platform, a measure of the pricing leverage Uber has with both its users and providers of services. 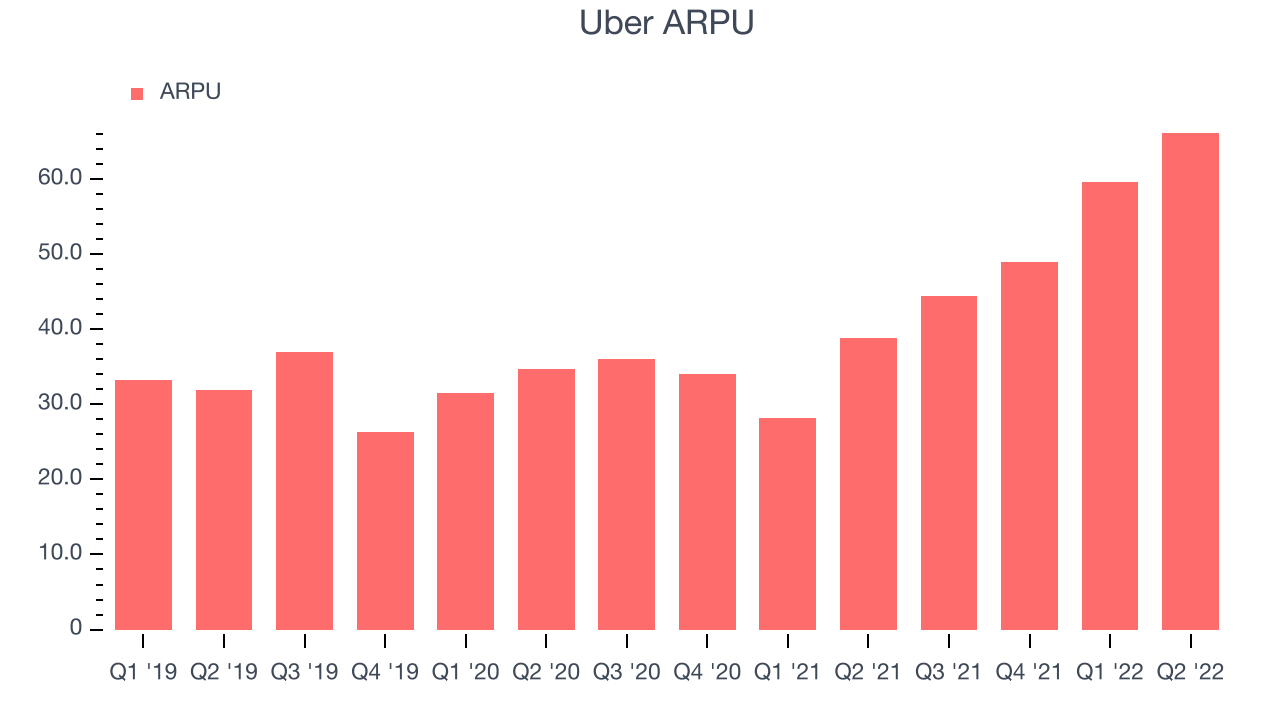 Uber’s ARPU growth has been strong over the last two years, averaging 34.5%. The ability to increase price while still growing its user base shows the value of Uber’s platform, as its users continue to spend more than last year. This quarter, ARPU grew 70.1% year on year, reaching $66.17 for each of the paying users.

Consumer internet businesses like Uber grow by a combination of product virality, paid advertisement and occasional incentives, unlike enterprise products that are typically sold by sales teams.

It is expensive for Uber to acquire new users, with the company spending 51.5% of its gross profit on marketing over the last year. This level of sales and marketing spend efficiency indicates Uber is not highly differentiated and points to Uber likely having to continue to invest to maintain growth.

Uber's EBITDA came in at $364 million this quarter, which translated to a 4.5% margin. Over the last twelve months Uber has shown above-average profitability for a consumer internet business with average EBITDA margins of 2.15%. 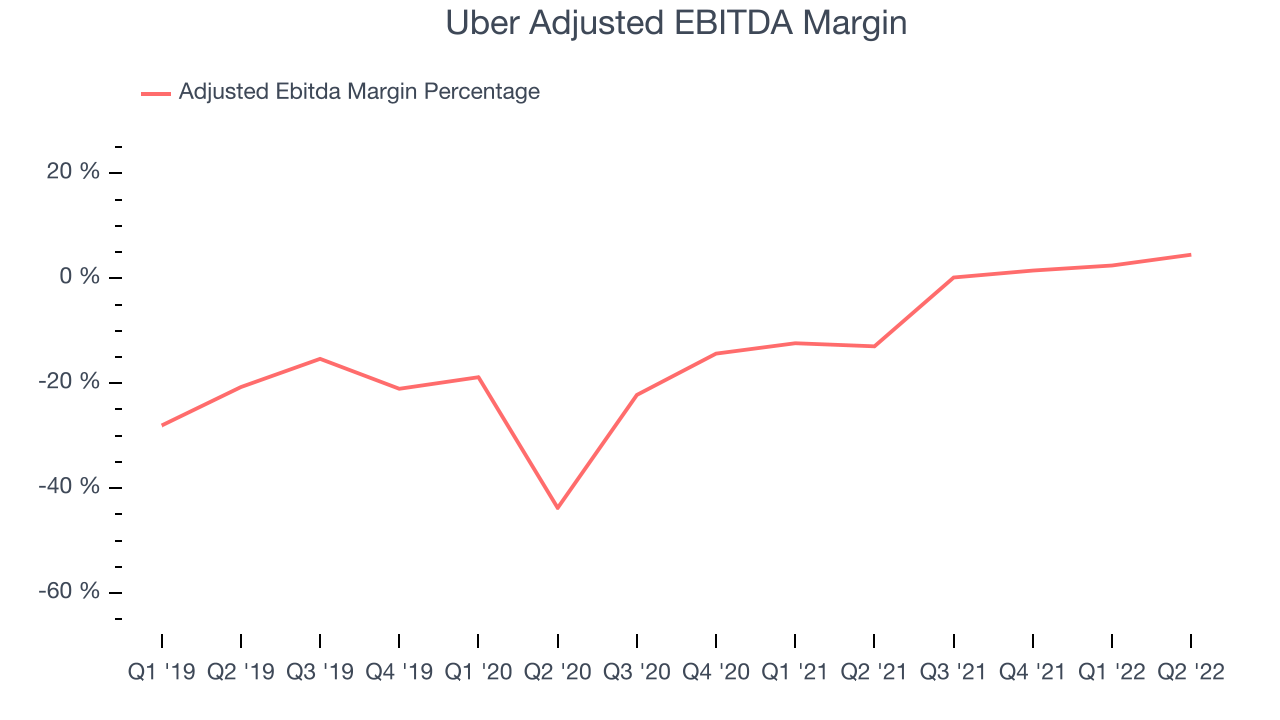 If you follow StockStory for a while, you know that we put an emphasis on cash flow. Why, you ask? We believe that in the end cash is king, as you can't use accounting profits to pay the bills. Uber's free cash flow came in at $382 million in Q2, turning positive year on year. 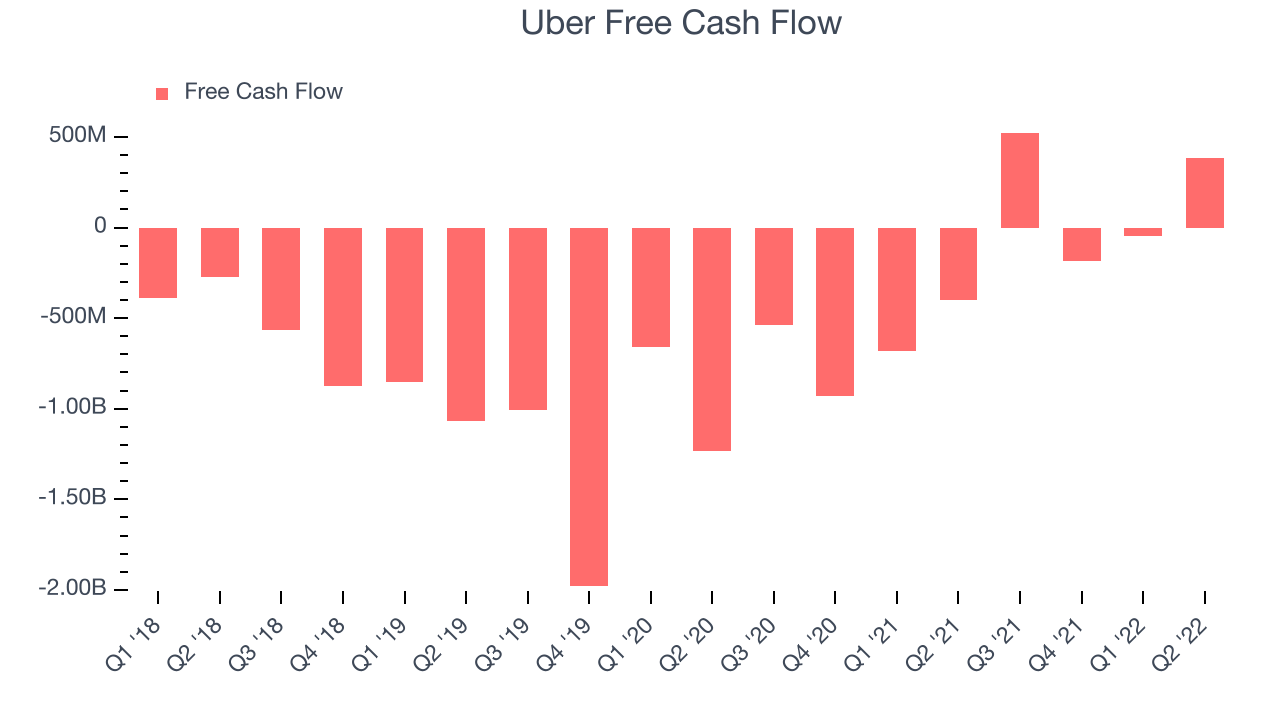 Uber has generated $672 million in free cash flow over the last twelve months, a 2.63% of revenues. This FCF margin is a result of Uber asset lite business model, and provides it with the optionality to further invest in the business.

Sporting a market capitalization of $48.3 billion, more than $4.39 billion in cash and with positive free cash flow over the last twelve months, we're confident that Uber has the resources it needs to pursue a high growth business strategy.

We were impressed by the strong free cash flow Uber delivered this quarter. And we were also excited to see that it outperformed Wall St’s revenue expectations. Zooming out, we think this impressive quarter should have shareholders feeling very positive. The company is up 15.4% on the results and currently trades at $28.4 per share.

Uber may have had a good quarter, but investors should also consider its valuation and business qualities, when assessing the investment opportunity. We think Uber is a solid business. We would expect growth rates to moderate from here, but its revenue growth has been impressive, over the last three years. And while its sales and marketing efficiency is sub-average, the good news is its increasing ARPU shows growing value of its platform, and its user growth has been healthy.

The market is certainly expecting long term growth from Uber given its EV/EBITDA ratio based on the next twelve months of 22.4x is higher than many other consumer internet companies. There are definitely things to like about Uber and there's no doubt it is a bit of a market darling, at least for some. But when considering the company against the backdrop of the consumer internet stock landscape, it seems that there is a lot of optimism already priced in and we are wondering whether there might be better opportunities elsewhere right now.