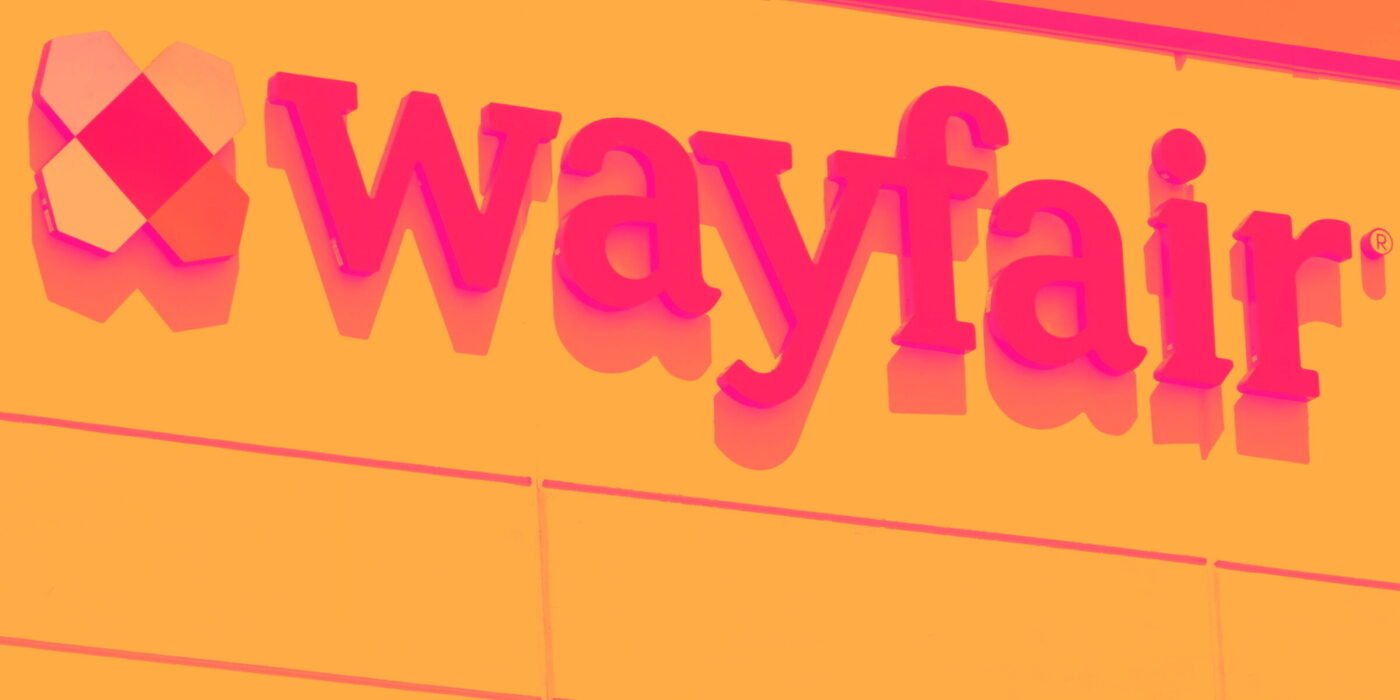 Online home goods retailer Wayfair (NYSE: W) reported results in line with analyst expectations in Q1 FY2022 quarter, with revenue down 13.9% year on year to $2.99 billion. Wayfair made a GAAP loss of $319 million, down on its profit of $18.2 million, in the same quarter last year.

Wayfair operates an ecommerce platform that operates through 5 brands: its flagship Wayfair.com, Joss & Main, Birch Lane, AllModern, and Perigold, who collectively offer over 20 million products from over 16K suppliers in the largely unbranded furniture manufacturing industry. The company offers the widest array of home furnishing options online, and because of the unbranded nature, is often relatively low priced, due to its lack of brick and mortar infrastructure, allowing consumers to personalize home stylings that mimic designer fashions at a fraction of the price.

Wayfair’s business model differentiation is threefold: a combination of scale-driven online marketing investments and expertise in converting customers, along with holding minimal inventory, instead orchestrating a logistics network where the majority of its products are shipped directly to customers from its suppliers, while also offering an Amazon-like ability for its suppliers to house inventory in Wayfair warehouses to speed delivery (for a fee).

Wayfair's revenue growth over the last three years has been strong, averaging 26% annually. The initial impact of the pandemic was positive for Wayfair's revenue, pulling forward sales, but quarterly revenue subsequently normalized, year over year.

This quarter, Wayfair reported a rather lacklustre 13.9% year on year revenue decline, in line with analyst estimates.

Ahead of the earnings results the analysts covering the company were estimating sales to grow 8.86% over the next twelve months.

As an online retailer, Wayfair generates revenue growth by growing both the number of buyers, and the average order size.

Over the last two years the number of Wayfair's active buyers, a key usage metric for the company, grew 24.1% annually to 25.4 million users. This is a strong growth for a consumer internet company. 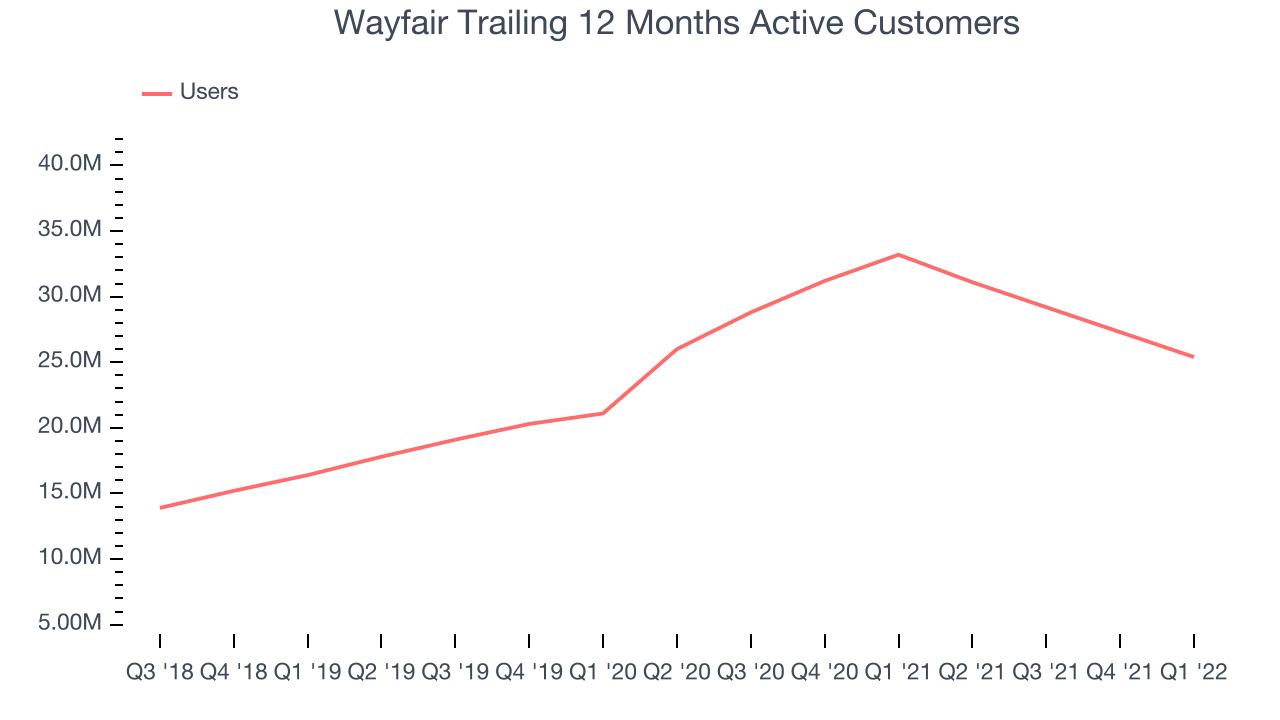 Unfortunately, in Q1 the number of active buyers decreased by 7.8 million, a 23.4% drop year on year.

Average revenue per user (ARPU) is a critical metric to track for every consumer internet product and for Wayfair it measures how much customers spend per order.

Wayfair’s ARPU has declined over the last two years, averaging 0.72% annually. While it is not great to see the company losing pricing power, at least the strong user growth somewhat compensates for it. This quarter, ARPU grew 12.4% year on year, reaching $117.83 for each of the active buyers.

Consumer internet businesses like Wayfair grow by a combination of product virality, paid advertisement and occasional incentives, unlike enterprise products that are typically sold by sales teams.

It is relatively expensive for Wayfair to acquire new users, with the company spending 48.4% of its gross profit on marketing over the last year. This level of sales and marketing spend efficiency indicates Wayfair has to compete for users and points to Wayfair likely having to continue to invest to maintain growth.

Wayfair reported negative EBITDA of $113 million this quarter, which was a -3.78% margin. Over the last twelve months Wayfair has shown above-average profitability for a consumer internet business with average EBITDA margins of 1.84%. 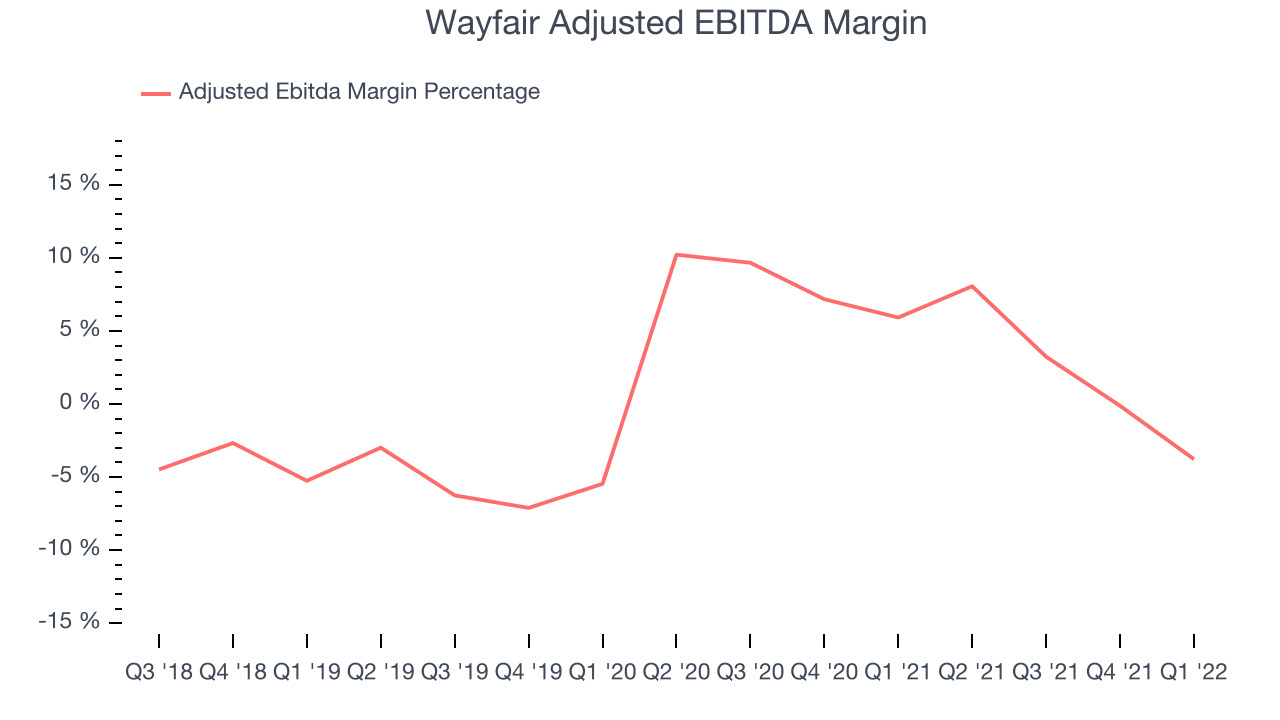 If you follow StockStory for a while, you know that we put an emphasis on cash flow. Why, you ask? We believe that in the end cash is king, as you can't use accounting profits to pay the bills. Wayfair burned through $331 million in Q1, with cash flow turning negative year on year. 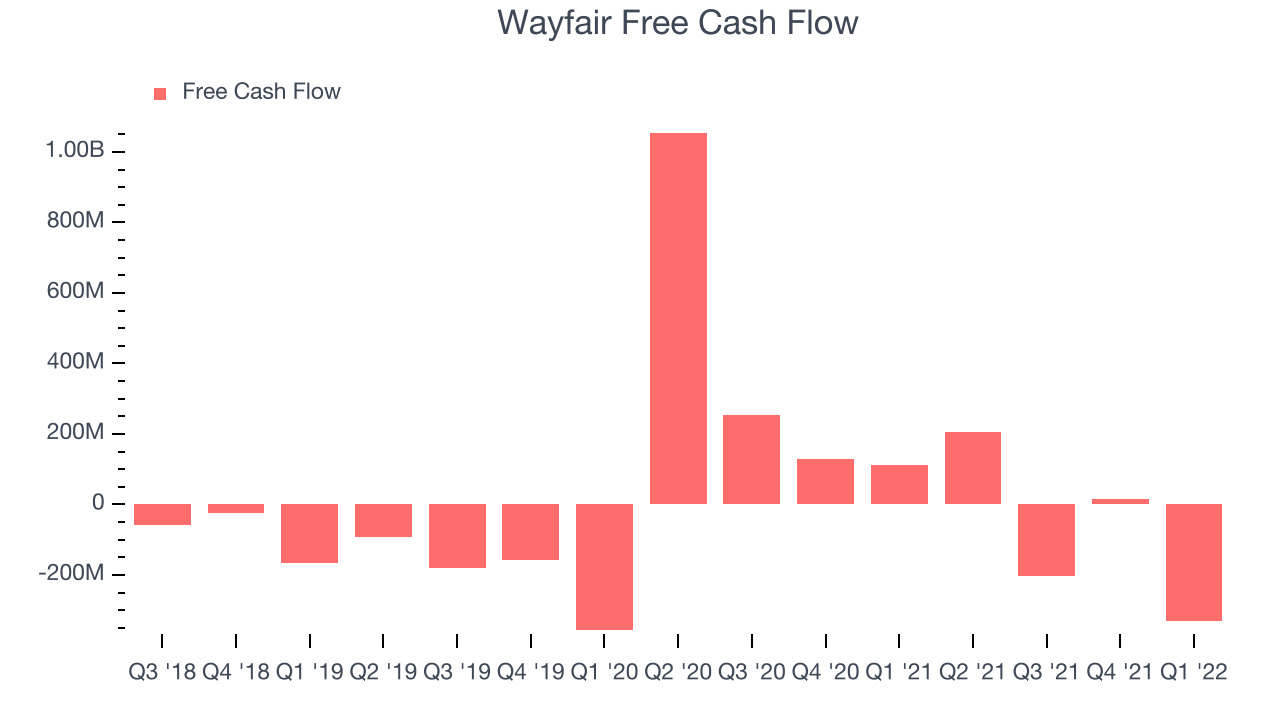 Wayfair has burned through $312.2 million in cash over the last twelve months, resulting in a mediocre -2.37% free cash flow margin. This below average FCF margin is a result of Wayfair's need to heavily invest in the business to continue to penetrate its market.

With a market capitalization of $9.52 billion Wayfair is among smaller companies, but its more than $1.2 billion in cash and the fact it is operating close to free cash flow break-even put it in a robust financial position to invest in growth.

We struggled to find many strong positives in these results. On the other hand, there was a decline in number of users and the revenue growth was quite weak. Overall, this quarter's results were not the best we've seen from Wayfair. The company currently trades at $50.4 per share.

When considering Wayfair, investors should take into account its valuation and business qualities, as well as what happened in the latest quarter. We cheer for everyone who is making the lives of others easier through technology, but in the case of Wayfair we will be cheering from the sidelines. Its revenue growth has been solid, though we don't expect it to maintain historical growth rates. But while its user growth has been strong, the downside is that its ARPU has been declining and its sales and marketing efficiency is sub-average.

Wayfair's price/gross profit ratio based on the next twelve months is 2.4x. While we have no doubt one can find things to like about the company, we think there might be better opportunities in the market and at the moment don't see many reasons to get involved.