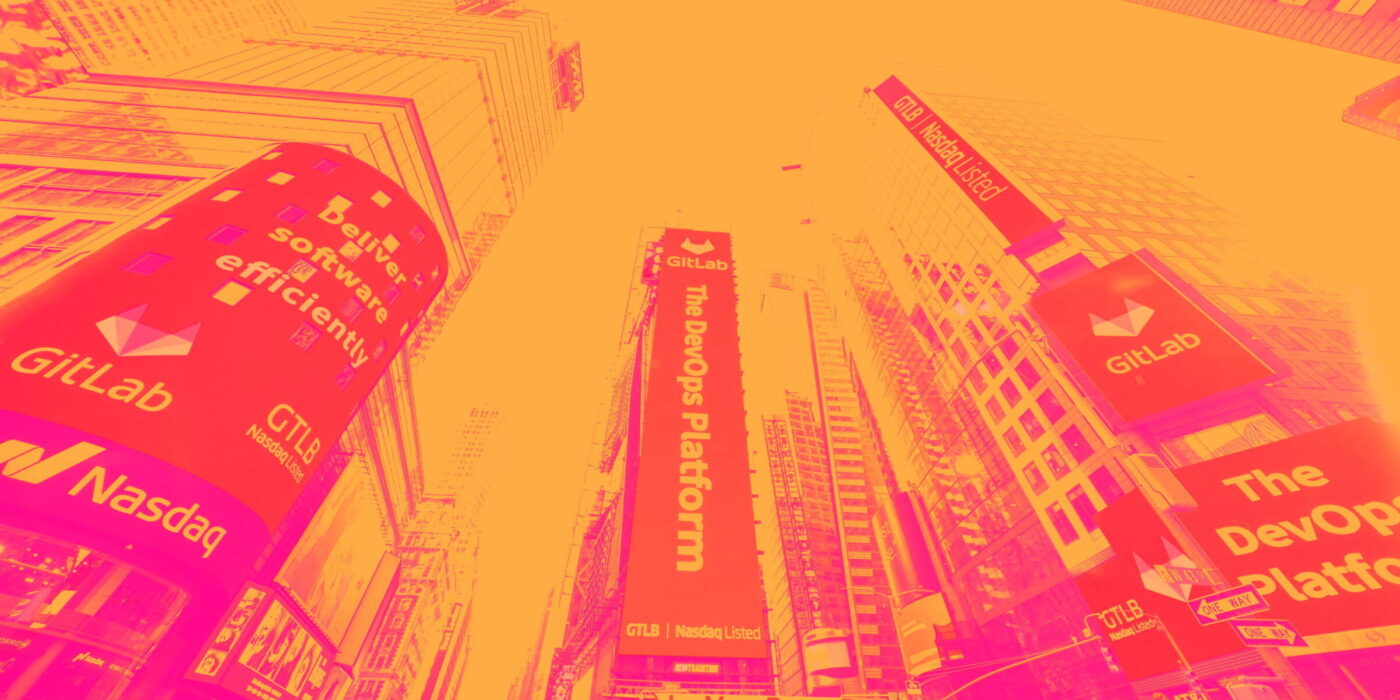 Software development tools maker GitLab (NASDAQ:GTLB) reported Q1 FY2023 results that beat analyst expectations, with revenue up 61.7% year on year to $87.4 million. On top of that, guidance for next quarter's revenue was surprisingly good, being $94 million at the midpoint, 3.65% above what analysts were expecting. GitLab made a GAAP loss of $26.6 million, improving on its loss of $34.5 million, in the same quarter last year.

As businesses across all sizes and industries are increasingly seeking the cost savings and improvements in customer engagement that Digital Transformation provides, this means that all companies are becoming software companies. Today, many software developers prefer to use reusable components that provide functionality so they don’t have to recreate the wheel for each new app. Traditionally, developing software meant costly internal or third party best-of-breed tools, all internally integrated, which only increased complexity, particularly when the frequency of updating / upgrading services has increased.

As a result, software development or DevOps has evolved to become more centralized, whereby all developers in a given organization use the same tools from the next gen software stacks: containers and microservices, which are modularized components of applications that allow a quicker pace of development. The second trend in modern software development is the adoption of best in class platforms rather than using a disparate collection of tools that need to be integrated with each other.

This is where GitLab comes in, its platform is a one stop shop for a huge range of DevOps tools with a single code base that is meant to address every stage in the lifecycle of software development. Two key differentiations versus other DevOps platforms are its breadth of tools and its ability to be deployed across AWS, Azure, Google Cloud Platform, which customers appreciate as a means of avoiding vendor lock-in.

As you can see below, GitLab's revenue growth has been incredible over the last year, growing from quarterly revenue of $54 million, to $87.4 million. 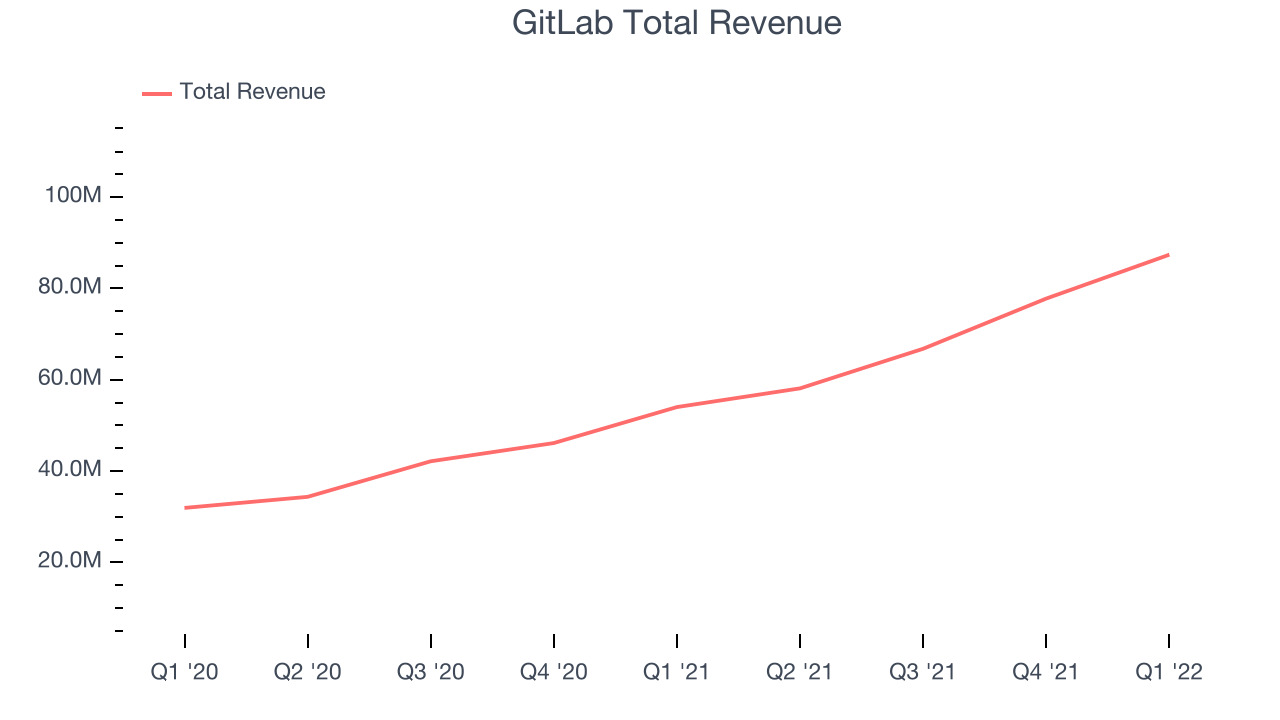 This was another standout quarter with the revenue up a splendid 61.7% year on year. But the growth did slow down a little compared to last quarter, as GitLab increased revenue by $9.61 million in Q1, compared to $10.9 million revenue add in Q4 2022. So while the growth is overall still impressive, we will be keeping an eye on the slowdown.

Guidance for the next quarter indicates GitLab is expecting revenue to grow 61.7% year on year to $94 million, slowing down from the 69.1% year-over-year increase in revenue the company had recorded in the same quarter last year. Ahead of the earnings results the analysts covering the company were estimating sales to grow 49.3% over the next twelve months.

What makes the software as a service business so attractive is that once the software is developed, it typically shouldn't cost much to provide it as an ongoing service to customers. GitLab's gross profit margin, an important metric measuring how much money there is left after paying for servers, licenses, technical support and other necessary running expenses was at 88.7% in Q1. 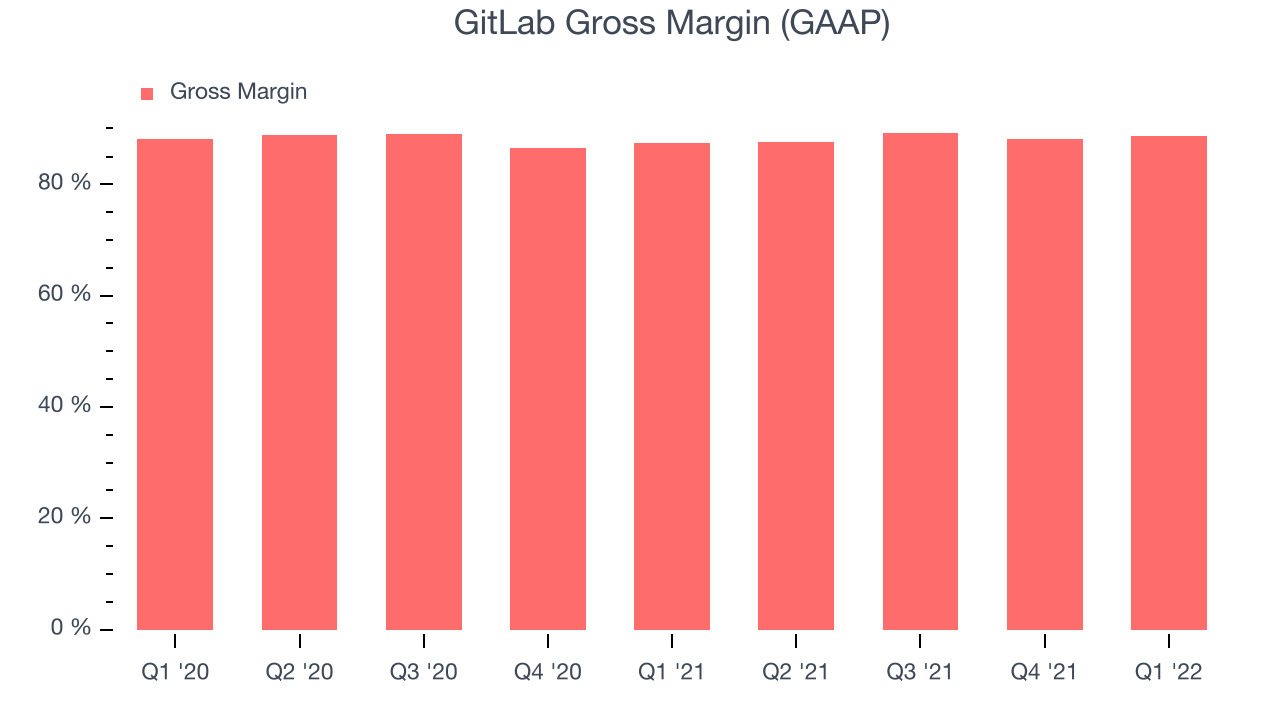 That means that for every $1 in revenue the company had $0.88 left to spend on developing new products, marketing & sales and the general administrative overhead. This is a great gross margin, that allows companies like GitLab to fund large investments in product and sales during periods of rapid growth and be profitable when they reach maturity. It is good to see that the gross margin is staying stable which indicates that GitLab is doing a good job controlling costs and is not under pressure from competition to lower prices.

If you follow StockStory for a while, you know that we put an emphasis on cash flow. Why, you ask? We believe that in the end cash is king, as you can't use accounting profits to pay the bills. GitLab burned through $30 million in Q1, increasing the cash burn by 55.4% year on year. 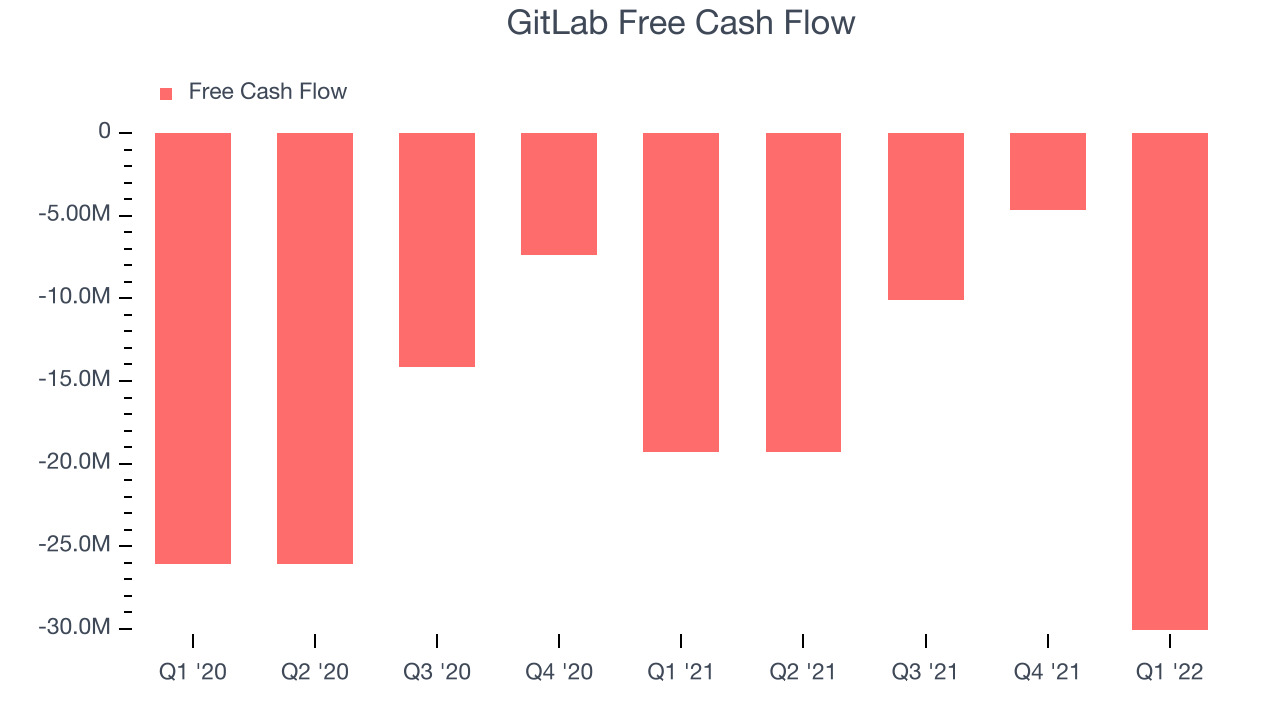 GitLab has burned through $64 million in cash over the last twelve months, a negative 22% free cash flow margin. This low FCF margin is a result of GitLab's need to still heavily invest in the business.

Since it has still been burning cash over the last twelve months it is worth keeping an eye on GitLab’s balance sheet, but we note that with a market capitalization of $6.04 billion and more than $934.7 million in cash, the company has the capacity to continue to prioritise growth over profitability.

We were impressed by how strongly GitLab outperformed analysts’ revenue expectations this quarter. And we were also excited to see the really strong revenue growth. Zooming out, we think this impressive quarter should have shareholders feeling very positive. The company currently trades at $47.8 per share.

When considering GitLab, investors should take into account its valuation and business qualities, as well as what happened in the latest quarter. There are a number of reasons why we think GitLab is a great business. First, its revenue growth has been exceptional. And while its growth is coming at a cost of significant cash burn, the good news is its impressive gross margins are indicative of excellent business economics, and its efficient customer acquisition is better than many similar companies.

GitLab's price to sales ratio based on the next twelve months is 13.6x, suggesting that the market is expecting more measured growth, relative to the hottest tech stocks. Looking at the tech landscape today, GitLab's qualities as a business really stand out and we still like it at this price.

The Wall St analysts covering the company had a one year price target of $115.2 per share right before these results, implying that they saw upside in buying GitLab even in the short term.