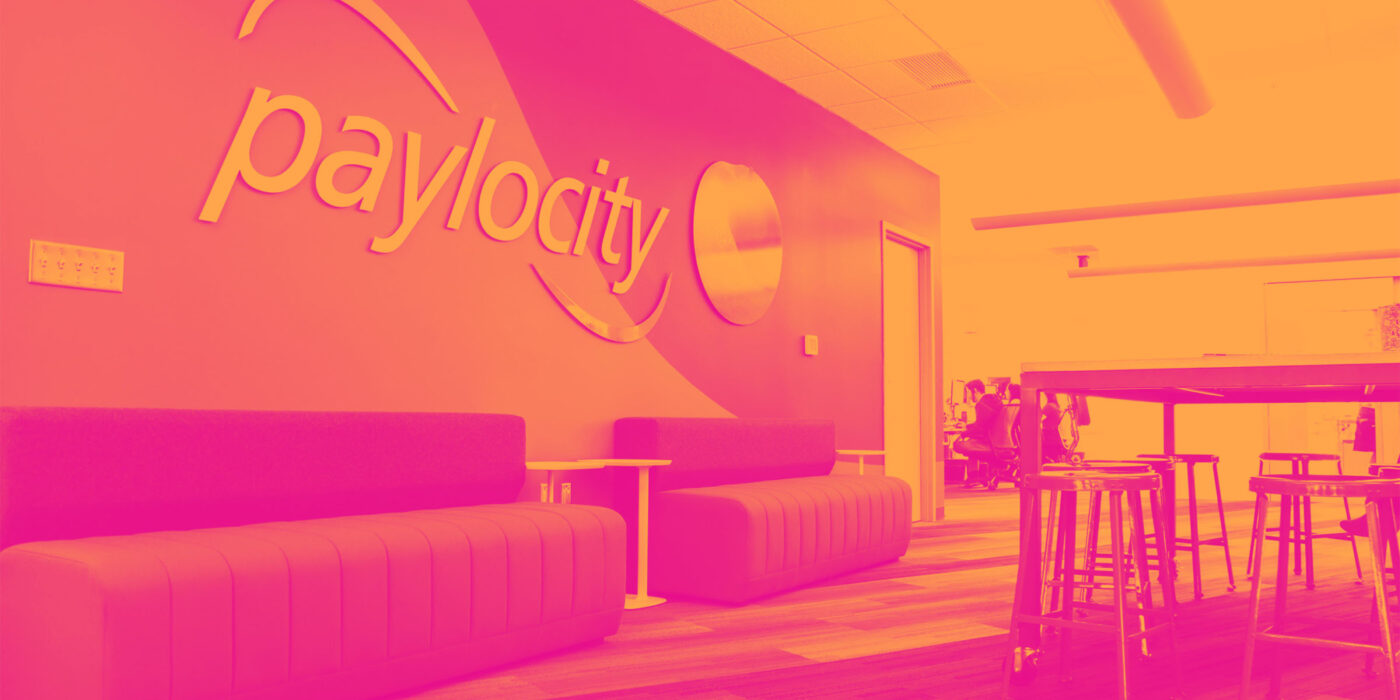 Payroll and human resources software provider, Paylocity (NASDAQ:PCTY) reported Q4 FY2022 results topping analyst expectations, with revenue up 36.7% year on year to $228.9 million. On top of that, guidance for next quarter's revenue was surprisingly good, being $239.3 million at the midpoint, 5.99% above what analysts were expecting. Paylocity made a GAAP profit of $15.1 million, improving on its profit of $11.8 million, in the same quarter last year.

Is now the time to buy Paylocity? Access our full analysis of the earnings results here, it's free.

“Recurring & other revenue grew 34% in fiscal 22 as our value proposition of providing the most modern software in the industry continues to resonate in the marketplace. Our products focused on the Modern Workforce have all seen significant increases in utilization, including Community, where monthly users has grown by more than 40% and video creation increased by over 80% in fiscal 22,” said Steve Beauchamp, Co-Chief Executive Officer of Paylocity.

Founded by payroll software veteran Steve Sarowitz in 1997, Paylocity (NASDAQ:PCTY) is a provider of payroll and human resources software for small and medium-sized enterprises.

As you can see below, Paylocity's revenue growth has been very strong over the last year, growing from quarterly revenue of $167.4 million, to $228.9 million. 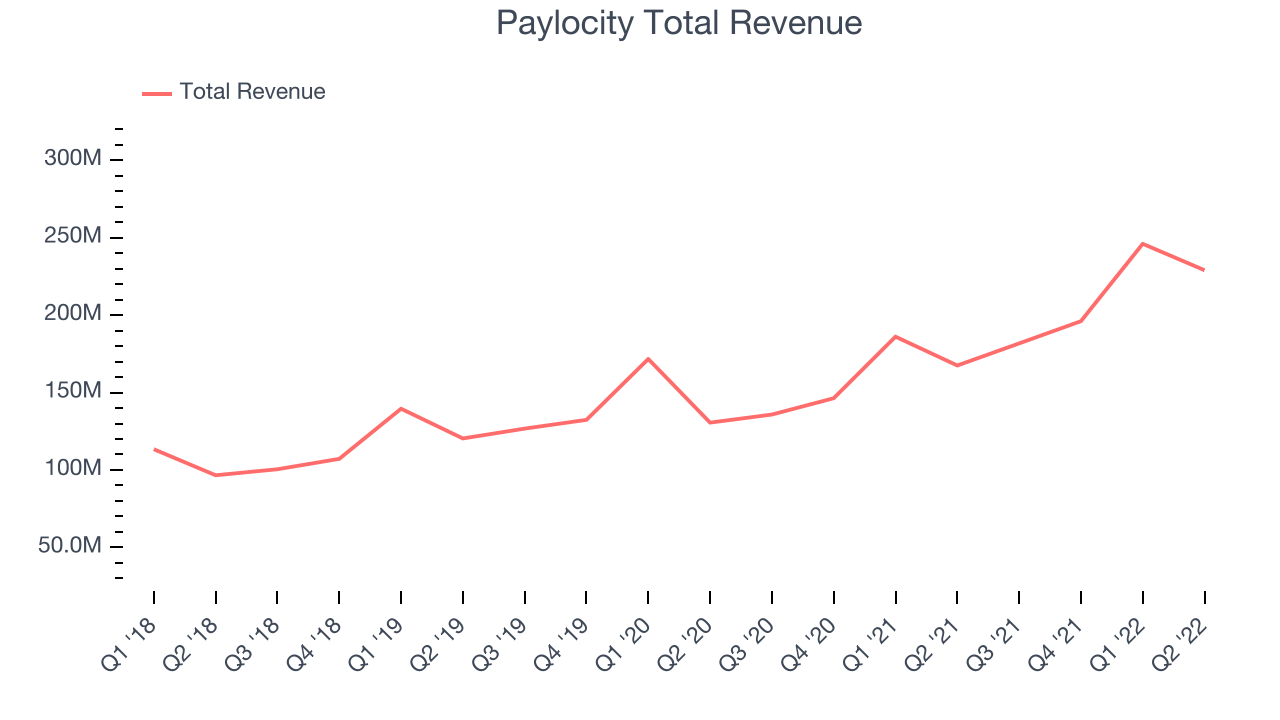 And unsurprisingly, this was another great quarter for Paylocity with revenue up 36.7% year on year. But the revenue actually decreased by $17 million in Q4, compared to $49.9 million increase in Q3 2022. However, Paylocity's sales do seem to have a seasonal pattern to them, and since management is guiding for revenue to rebound in the coming quarter we wouldn't be too concerned.

Guidance for the next quarter indicates Paylocity is expecting revenue to grow 31.7% year on year to $239.3 million, in line with the 33.8% year-over-year increase in revenue the company had recorded in the same quarter last year. For the upcoming financial year management expects revenue to be $1.08 billion at the midpoint, growing 27.7% compared to 34.1% increase in FY2022.

What makes the software as a service business so attractive is that once the software is developed, it typically shouldn't cost much to provide it as an ongoing service to customers. Paylocity's gross profit margin, an important metric measuring how much money there is left after paying for servers, licenses, technical support and other necessary running expenses was at 66.1% in Q4. 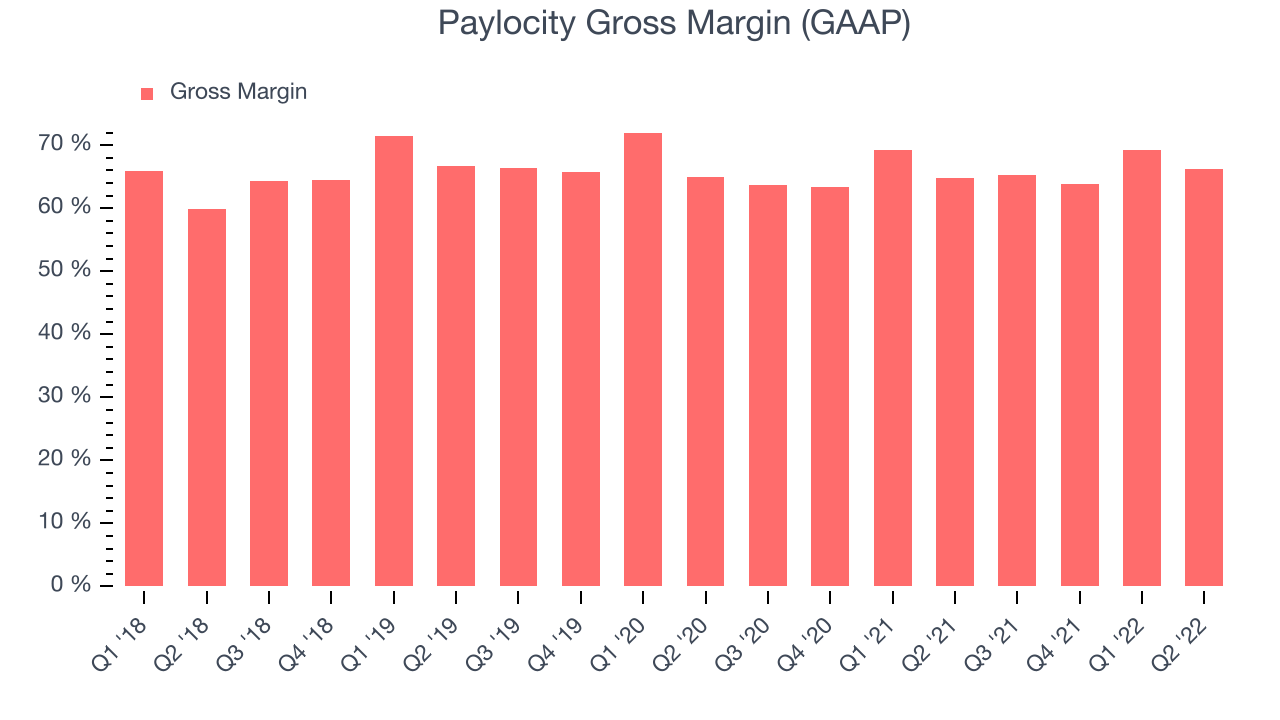 Sporting a market capitalization of $12.4 billion, more than $139.7 million in cash and with positive free cash flow over the last twelve months, we're confident that Paylocity has the resources it needs to pursue a high growth business strategy.

We were impressed by the very optimistic revenue guidance Paylocity provided for the next quarter. And we were also glad that the revenue guidance for the rest of the year exceeded expectations and free cash flow came in strong. On the other hand, it was less good to see the pretty significant deterioration in gross margin. Overall, we think this was a strong quarter, that should leave shareholders feeling very positive. The company is up 5.09% on the results and currently trades at $238 per share.

Should you invest in Paylocity right now? It is important that you take into account its valuation and business qualities, as well as what happened in the latest quarter. We look at that in our actionable report which you can read here, it's free.