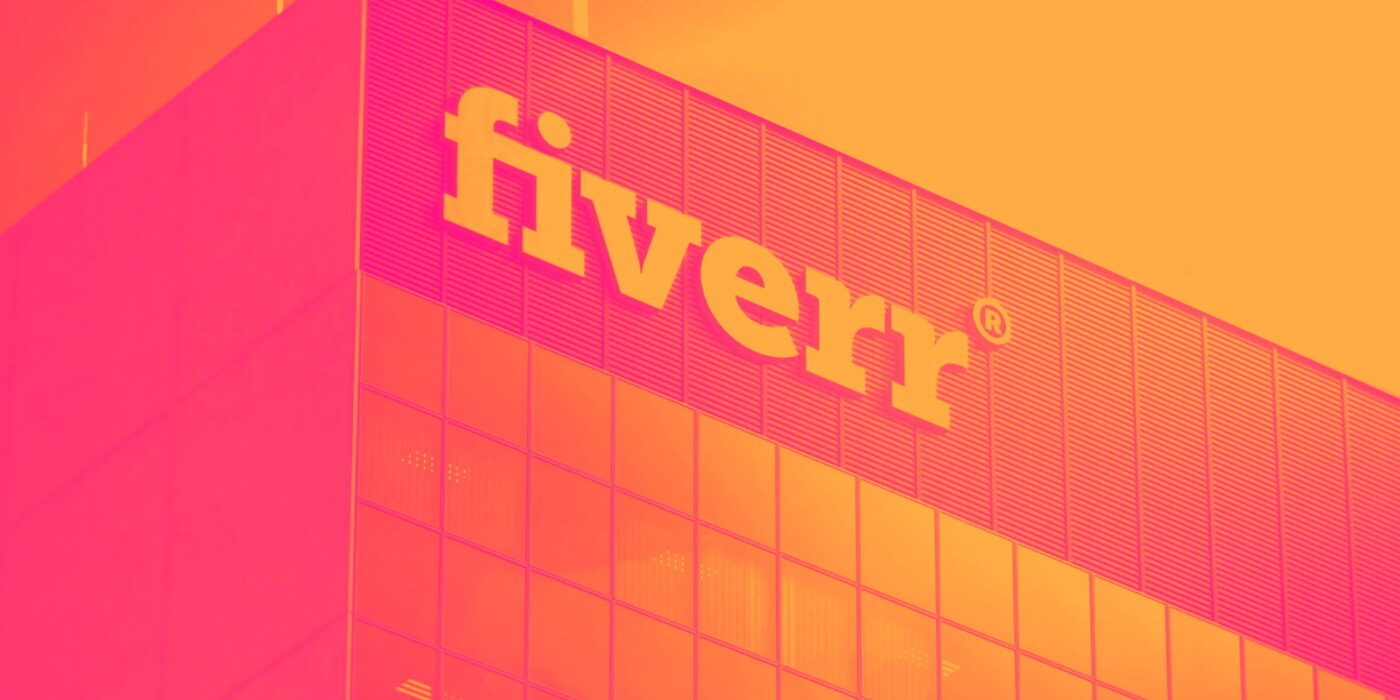 Online freelance marketplace Fiverr (NYSE: FVRR) was in-line with analyst expectations in Q1 FY2022 quarter, with revenue up 26.8% year on year to $86.6 million. Guidance for the next quarter missed analyst expectations with revenues guided to $86.7 million at the midpoint, or 6.34% below analyst estimates. Fiverr made a GAAP loss of $16.9 million, improving on its loss of $17.8 million, in the same quarter last year.

Fiverr operates a global digital services marketplace in over 450 categories including graphic design, digital marketing, translation and programming. The company operates in over 160 countries, with roughly 2/3rds of its business taking place in English-speaking countries.

The value proposition for buyers of “gigs” is multi-part: access to an expansive catalog of digital services and a diverse pool of freelancers, price certainty for clearly defined services, and the knowledge that Fiverr will regulate any disputes between buyers and sellers of services.

For gig sellers, Fiverr provides an audience and digital storefront to list their services. By reducing the need to source a pipeline of new projects, freelancers can focus on execution. The fixed price element removes the need for negotiating with buyers. Fiverr also provides the business support infrastructure for freelancers, such as standardized contracts, invoicing and payment, financial reporting, marketing and real-time performance feedback along with a customer support function.

Fiverr's revenue growth over the last three years has been exceptional, averaging 58.2% annually. The initial impact of the pandemic was positive for Fiverr's revenue, but growth rates subsequently normalized.

This quarter, Fiverr reported a decent 26.8% year on year revenue growth, roughly in-line with what analysts were expecting.

Guidance for the next quarter indicates Fiverr is expecting revenue to grow 15.2% year on year to $86.7 million, slowing down from the 59.6% year-over-year increase in revenue the company had recorded in the same quarter last year. Ahead of the earnings results the analysts covering the company were estimating sales to grow 27% over the next twelve months.

Over the last two years the number of Fiverr's active buyers, a key usage metric for the company, grew 33.1% annually to 4.2 million users. This is among the fastest growth of any consumer internet company, indicating that users are excited about the offering.

In Q1 the company added 400 thousand active buyers, translating to a 10.5% growth year on year.

Average revenue per user (ARPU) is a critical metric to track for every consumer internet product and for Fiverr it measures how much it earns off each transaction on its platform, a measure of the pricing leverage Fiverr has with both its users and providers of services.

Fiverr’s ARPU growth has been strong over the last two years, averaging 24.6%. The ability to increase price while still growing its user base reflects the strength of Fiverr’s platform, as its users continue to spend more than last year. This quarter, ARPU grew 14.7% year on year, reaching $20.63 for each of the active buyers.

Consumer internet businesses like Fiverr grow by a combination of product virality, paid advertisement and occasional incentives, unlike enterprise products that are typically sold by sales teams.

It is very expensive for Fiverr to acquire new users, with the company spending 63.2% of its gross profit on marketing over the last year. This low level of sales and marketing efficiency indicates a highly competitive environment, with little differentiation between Fiverr and its peers.

Fiverr's EBITDA came in at $3.86 million this quarter, which translated to a 4.45% margin. Over the last twelve months, the company has exhibited strong profitability with average EBITDA margins of 8.8%. 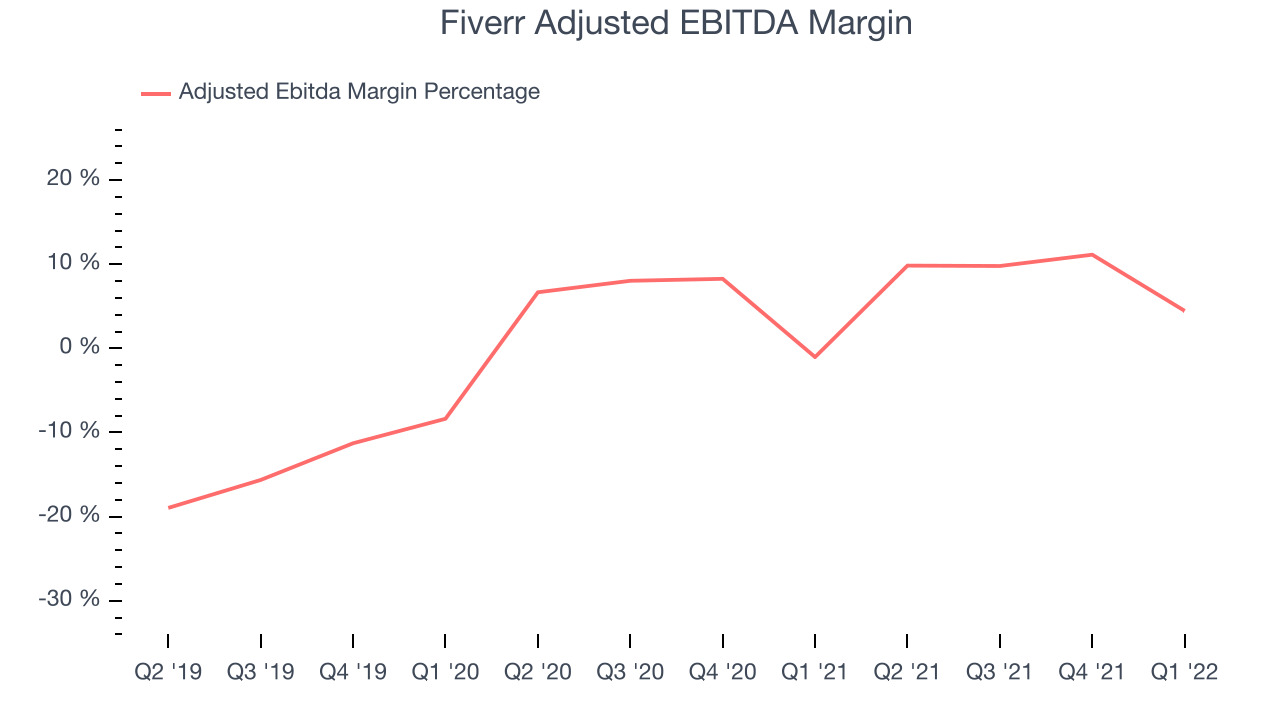 If you follow StockStory for a while, you know that we put an emphasis on cash flow. Why, you ask? We believe that in the end cash is king, as you can't use accounting profits to pay the bills. Fiverr's free cash flow came in at $6.81 million in Q1, up 67% year on year. 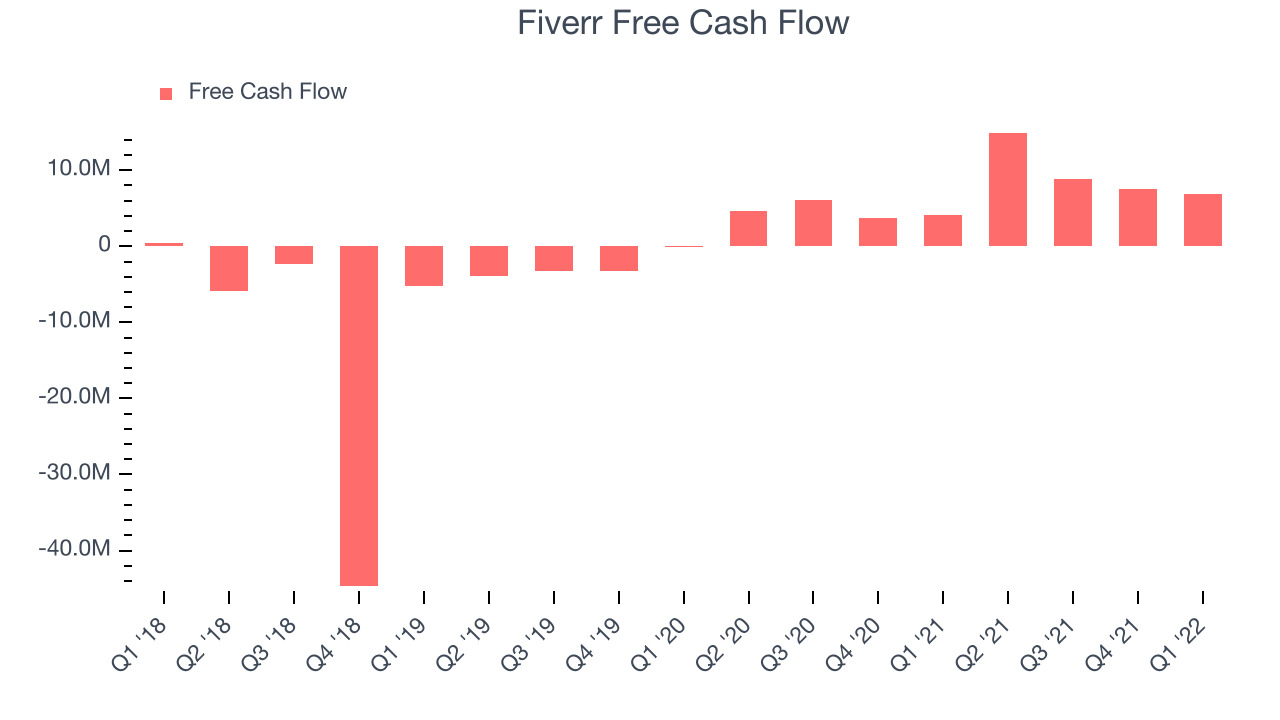 Fiverr has generated $38.1 million in free cash flow over the last twelve months, 12% of revenues. This strong FCF margin is a result of Fiverr asset lite business model and provides it plenty of cash to invest in the business.

With a market capitalization of $1.5 billion Fiverr is among smaller companies, but its more than $212.2 million in cash and positive free cash flow over the last twelve months put it in a very strong position to invest in growth.

Fiverr delivered solid revenue growth this quarter. And we were also glad to see the user growth. On the other hand, it was unfortunate to see that the revenue guidance for both the next quarter and full-year missed analysts' expectations. Overall, this quarter's results could have been better. The company is flat on the results and currently trades at $39.5 per share.

When considering Fiverr, investors should take into account its valuation and business qualities, as well as what happened in the latest quarter. We think Fiverr is a good business. We would expect growth rates to moderate from here, but its revenue growth has been exceptional, over the last three years. And while its sales and marketing spend is very high compared to other consumer internet businesses, the good news is its user growth has been strong, and its strong free cash generation allows it to sustainably invest in growth initiatives.

The market is certainly expecting long term growth from Fiverr given its EV/EBITDA ratio based on the next twelve months of 41.4x is higher than many other consumer internet companies. There is definitely a lot of things to like about Fiverr and looking at the consumer internet landscape right now, it seems that it doesn't trade at an unreasonable price point.

The Wall St analysts covering the company had a one year price target of $114.8 per share right before these results, implying that they saw upside in buying Fiverr even in the short term.