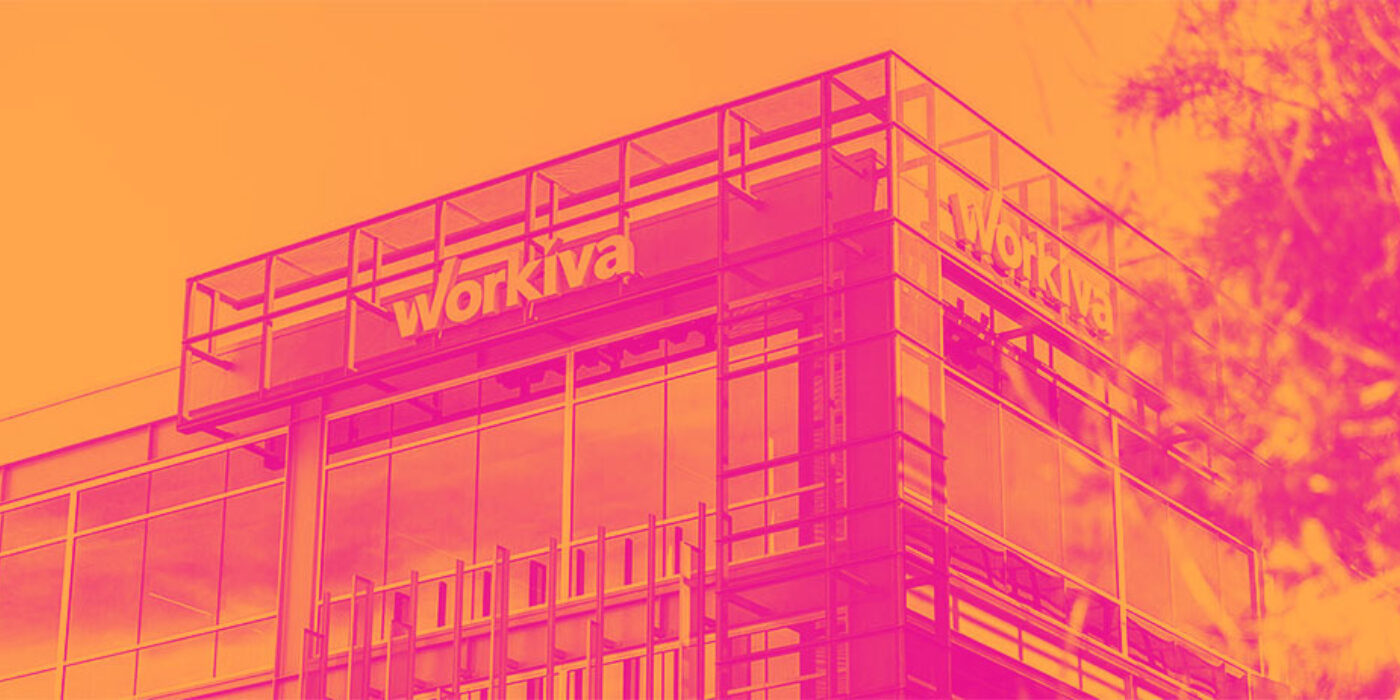 Financial and compliance reporting software company Workiva (NYSE:WK) announced better-than-expected results in the Q1 FY2022 quarter, with revenue up 24.4% year on year to $129.6 million. Guidance for the full year also exceeded estimates, however the guidance for the next quarter was less impressive, coming in at $126 million, 1.36% below analyst estimates. Workiva made a GAAP loss of $18.4 million, down on its loss of $7.32 million, in the same quarter last year.

The platform automatically gathers and updates data from various internal company sources like accounting software or spreadsheets and joins it together in the cloud, removing the need for accounting teams to do it manually. Workiva users can then connect the data directly to financial, regulatory, and performance reports and presentations and know that they are always using the correct, approved and most up-to-date, version of it. Workiva's target market is enterprises and big institutions that have large volumes of data distributed across various sources and a lot of reporting requirements at the same time.

The demand for software platforms that automate compliances processes is rising as keeping up with the latest financial reporting regulations and standards is difficult and expensive, especially as companies increasingly operate across several geographical regions with varying rules.

Other providers of financial management software solutions include Blackline (NASDAQ:BL), and Oracle (NYSE:ORCL).

As you can see below, Workiva's revenue growth has been strong over the last year, growing from quarterly revenue of $104.2 million, to $129.6 million.

This quarter, Workiva's quarterly revenue was once again up a very solid 24.4% year on year. On top of that, revenue increased $8.89 million quarter on quarter, a solid improvement on the $8.09 million increase in Q4 2021. Happily, that's a slight re-acceleration of growth.

Guidance for the next quarter indicates Workiva is expecting revenue to grow 19.3% year on year to $126 million, slowing down from the 25.9% year-over-year increase in revenue the company had recorded in the same quarter last year. Ahead of the earnings results the analysts covering the company were estimating sales to grow 18.6% over the next twelve months.

You can see below that Workiva reported 4,408 customers at the end of the quarter, an increase of 93 on last quarter. That is a little slower customer growth than what we are used to seeing lately, suggesting that the customer acquisition momentum is slowing a little bit. 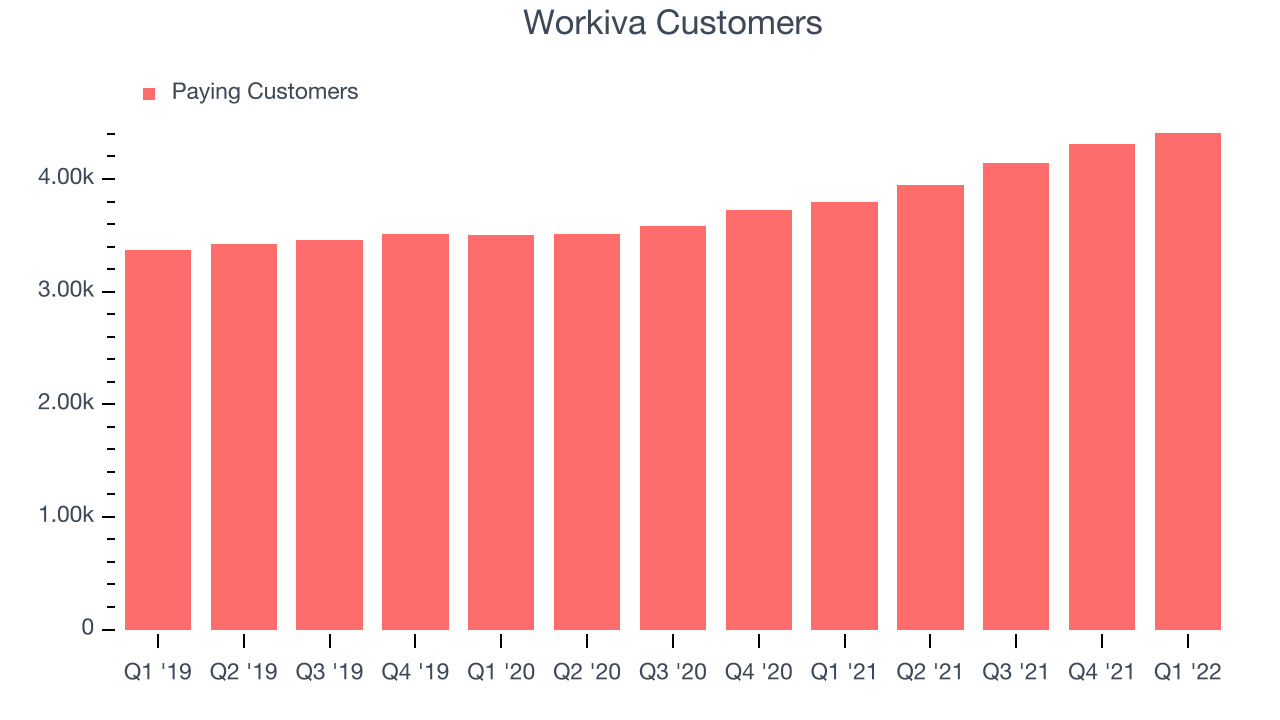 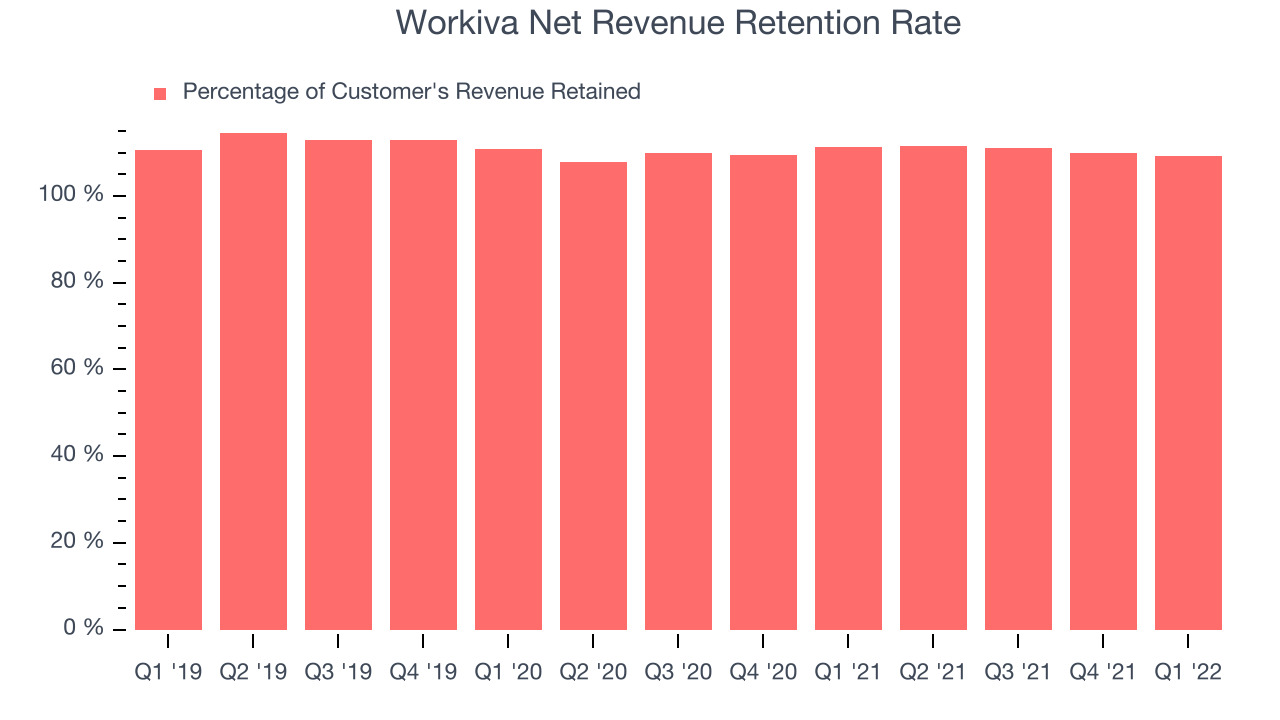 Workiva's net revenue retention rate, an important measure of how much customers from a year ago were spending at the end of the quarter, was at 109% in Q1. That means even if they didn't win any new customers, Workiva would have grown its revenue 9.2% year on year. That is a decent retention rate and it shows us that not only Workiva's customers stick around but at least some of them get increasing value from its software over time.

What makes the software as a service business so attractive is that once the software is developed, it typically shouldn't cost much to provide it as an ongoing service to customers. Workiva's gross profit margin, an important metric measuring how much money there is left after paying for servers, licenses, technical support and other necessary running expenses was at 76.1% in Q1. 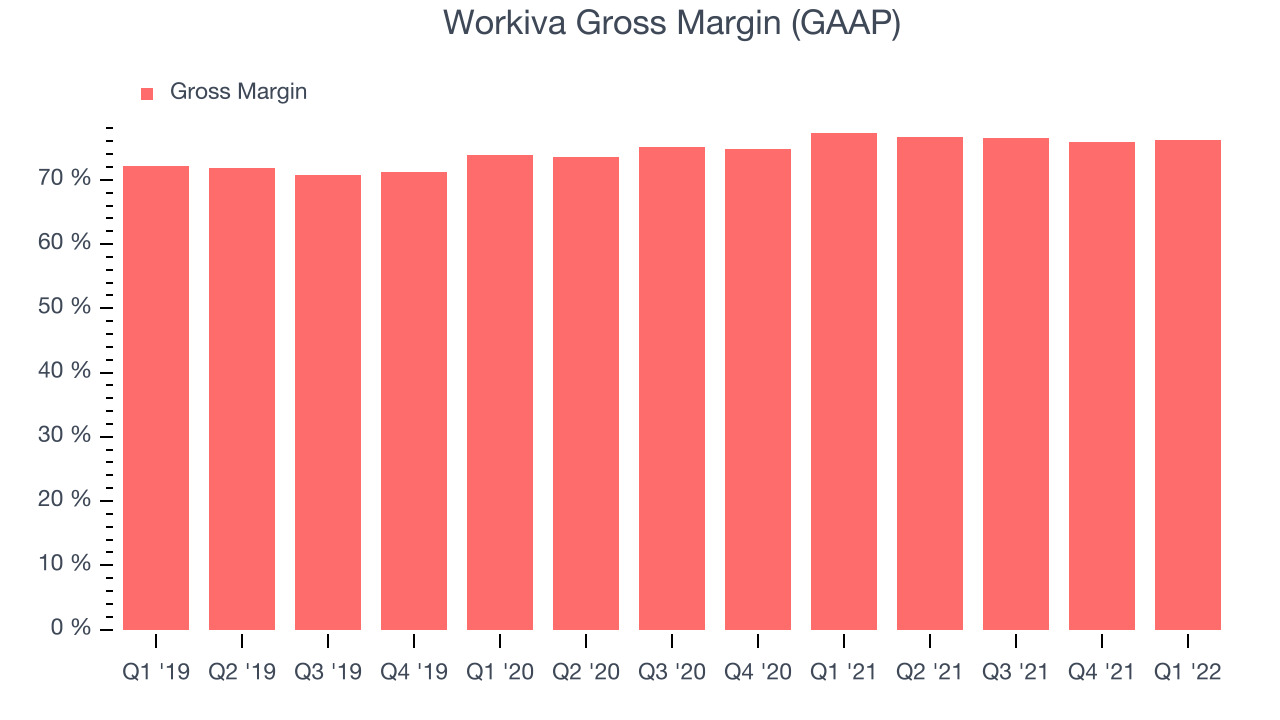 That means that for every $1 in revenue the company had $0.76 left to spend on developing new products, marketing & sales and the general administrative overhead. This is a good gross margin that allows companies like Workiva to fund large investments in product and sales during periods of rapid growth and be profitable when they reach maturity. It is good to see that the gross margin is staying stable which indicates that Workiva is doing a good job controlling costs and is not under pressure from competition to lower prices.

If you follow StockStory for a while, you know that we put an emphasis on cash flow. Why, you ask? We believe that in the end cash is king, as you can't use accounting profits to pay the bills. Workiva burned through $1.46 million in Q1, with cash flow turning negative year on year. 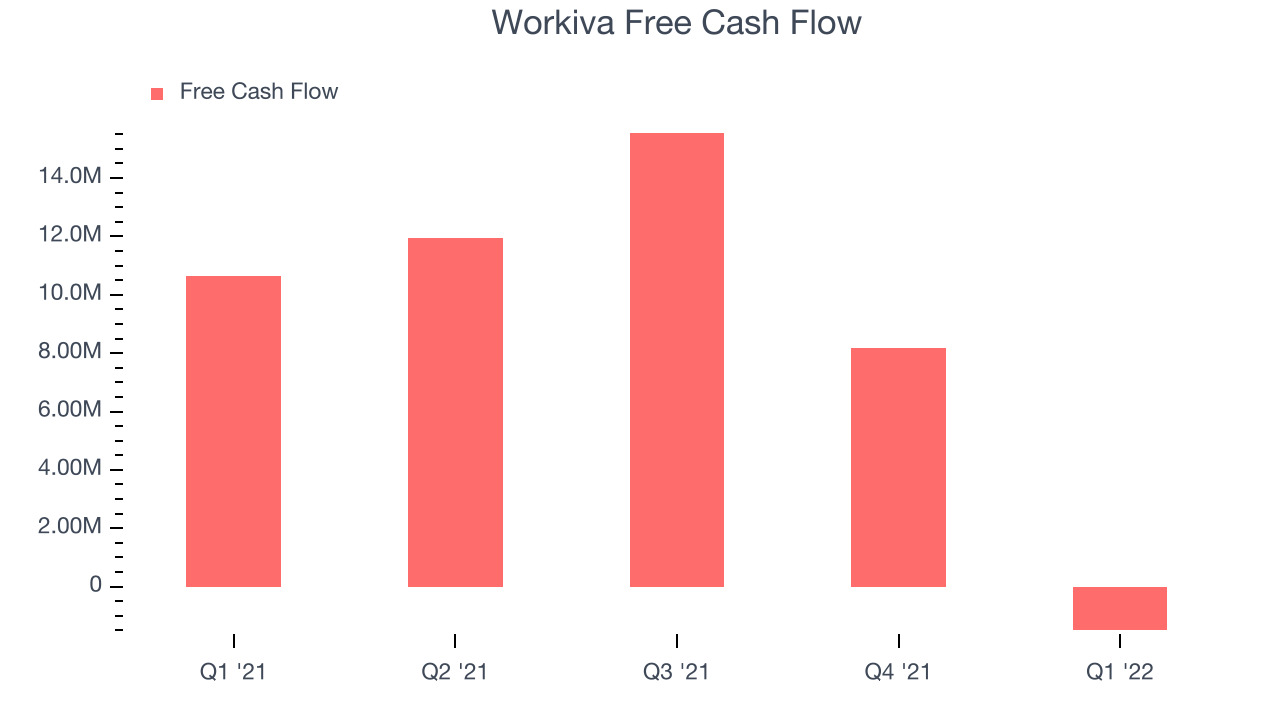 Workiva has generated $34.1 million in free cash flow over the last twelve months, a decent 7.29% of revenues. This FCF margin is a result of Workiva asset lite business model, and provides it with optionality and decent amount of cash to invest in the business.

With a market capitalization of $5.02 billion Workiva is among smaller companies, but its more than $523.5 million in cash and positive free cash flow over the last twelve months give us confidence that Workiva has the resources it needs to pursue a high growth business strategy.

Workiva topped analysts’ revenue expectations this quarter, even if just narrowly. And we were also glad to see good revenue growth. On the other hand, it was unfortunate to see that the revenue guidance for the next quarter missed analysts' expectations and there was a slowdown in customer growth. Overall, this quarter's results could have been better. The company is down 10.8% on the results and currently trades at $84 per share.

When considering Workiva, investors should take into account its valuation and business qualities, as well as what happened in the latest quarter. Although we have other favorites, we understand the arguments that Workiva is not a bad business. We would expect growth rates to moderate from here, but its revenue growth has been solid, over the last two years. And on top of that, its strong gross margins suggest it can operate profitably and sustainably.

Workiva's price to sales ratio based on the next twelve months is 8.9x, suggesting that the market is expecting more moderate growth, relative to the hottest tech stocks. We don't really see a big opportunity in the stock at the moment, but in the end beauty is in the eye of the beholder. And if you like the company, it seems that Workiva doesn't trade at a completely unreasonable price point.